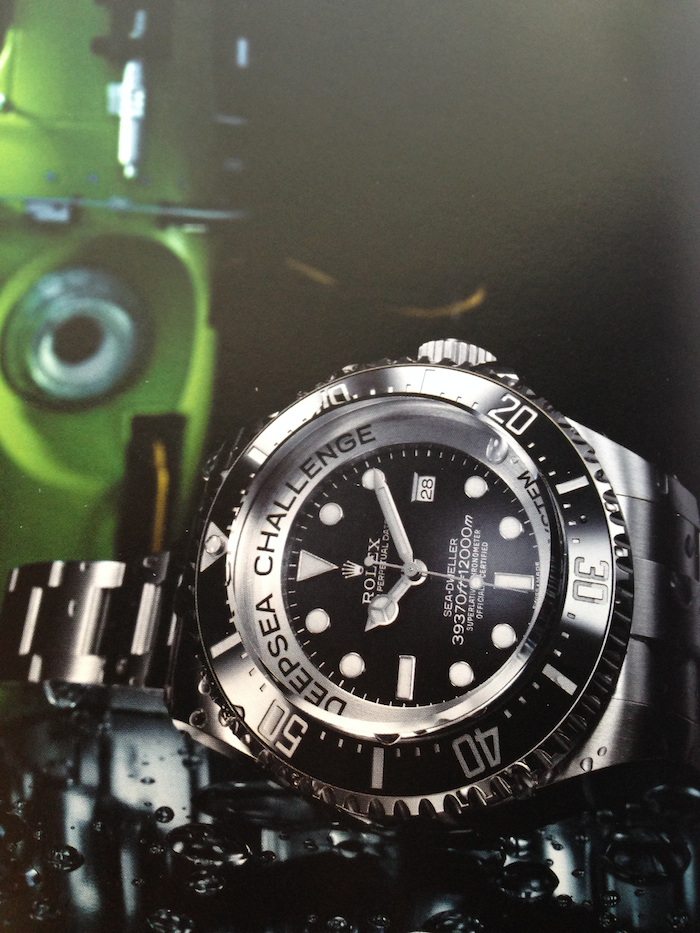 No doubt since Monday night, you have been seeing pictures all over the Internet of the new Rolex DeepSea Challenge. In fact, we were at the unveiling event in New York and tweeted and posted about the watch, which we will talk more about in this post. First, we want to bring you behind the scenes with Rolex and filmmaker-turned-explorer James Cameron for a first-hand experience of how and why the new Rolex watch came to be. 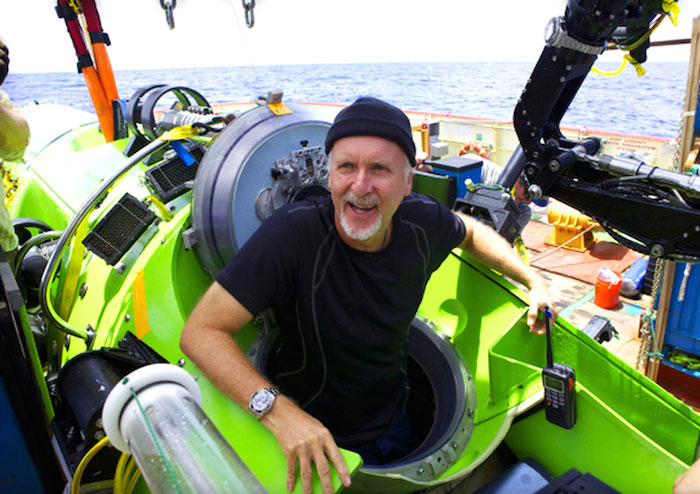 First: James Cameron, Director of the film, Titanic (as well as Avatar and other great movies), Cameron caught the ocean-exploration bug when he was just a child. He dreamed of exploring Earth’s deepest frontier. His work as a filmmaker enabled him in many of his movies to bring that daring side to reality. However, his ultimate dream was re-ignited when he filmed the movie Titanic, as he was one of a select few who actually got to dive in a submersible and see the Titanic first-hand.

“If big companies could build machines that could bring us inside the Titanic with cameras, then I could build something, too,” says Cameron. 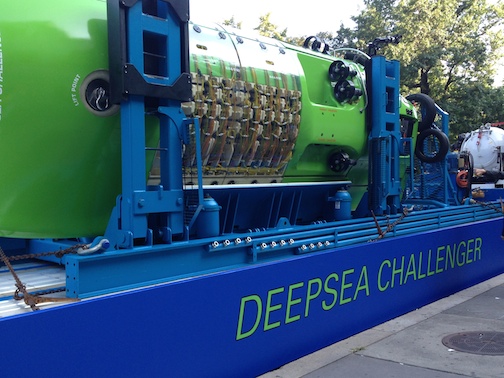 The Deepsea Challenger was parked outside the American Museum of Natural History for all to see.

In fact, he designed and built not only his own futuristic vertical submersible vehicle, but also the 3-D cameras that would enable him to explore life at depths of more than 30,000 feet. He spent seven years on research and design to build equipment that could sustain the unbearable pressure at 36,000 feet under the ocean. He coordinated a top-notch team of experts who were just as enthralled about and challenged by the dive concept as he was. He sought out advice from U.S. Navy Lt. Don Walsh, the operator of the bathyscaphe Trieste that made the first (and only previous) venture to the Mariana Trench more than 50 years ago in 1960 (Rolex was on that journey, too, strapped to the hull of the Bathyscaphe). The team built in arms for taking samples of sand and rock. They rigged bait to catch different species of life for future examination. 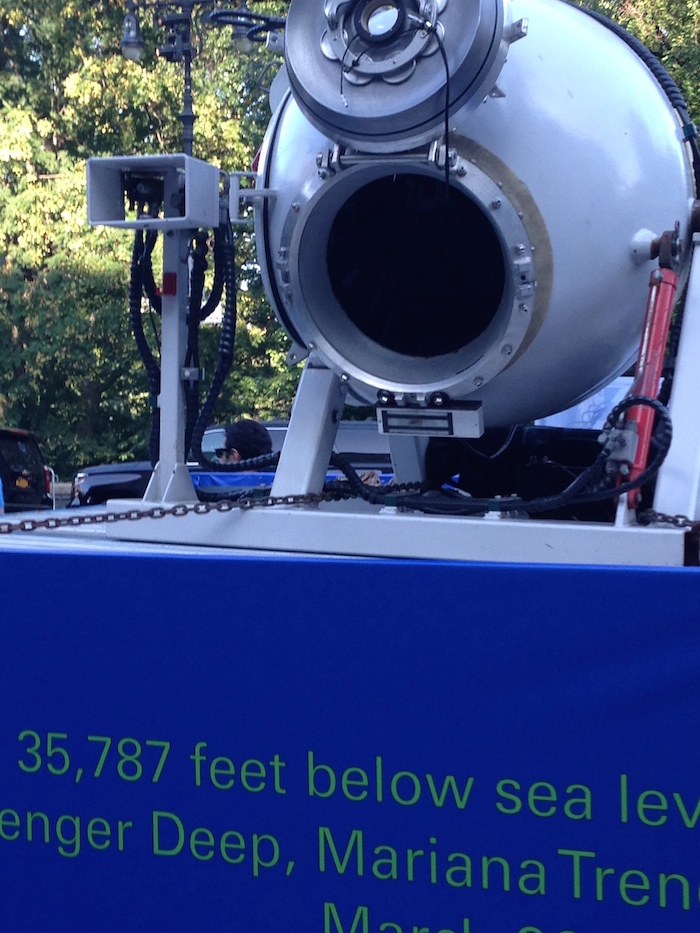 The cockpit of the capsule that Cameron spent eight hours in on his voyage to the bottom of the sea was 43 inches in diameter. Photo c) RobertaNaas/ATimelyPerspective

At last, for Cameron and his team, months of testing the DeepSea Challenger at different ocean depths became a reality as the precursor to the actual dive. Each and every time he went down – in a pilot’s chamber that measured just 43 inches in diameter and was fitted into the base of the DeepSea Challenger — Cameron risked his life.

Finally on March 26, 2012, with rough seas rolling in and only a tiny window of opportunity in the dark pre-dawn hours to start the historic voyage, Cameron crawled into the pilot’s capsule, watched as the water-tight (400 pound) hatch was closed and sealed, and embarked on his dark, quiet journey down. Strapped to the outside camera arm, was the new experimental Rolex DeepSea Challenge watch, modeled after the new Deepsea Challenge D-Blue watch. 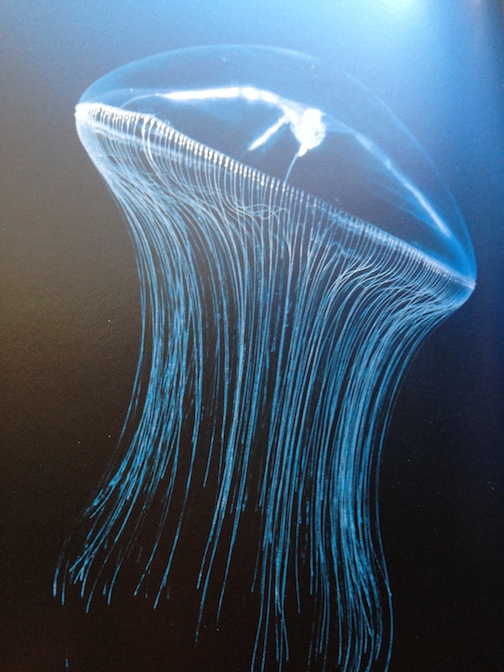 Crammed into the tight space of the steel pilot’s chamber, Cameron says he experienced an odd calm. Following what seemed like endless checks, cross checks and other tasks, he had some time to contemplate his vertical plunge alone in the dark ocean. As he descends, the outside temperature drops by 50 degrees and the sphere cools. He dons hat and wool socks. Still the DeepSea Challenger continues to drop. Two and a half hours later, Cameron reaches bottom – 35,756 feet deep. It is a bottom devoid of any signs of real ocean life, save that of plankton.

“Here there is no sign of life, the surface was undisturbed. I think we may have reached a depth that defies life itself,” says Cameron. 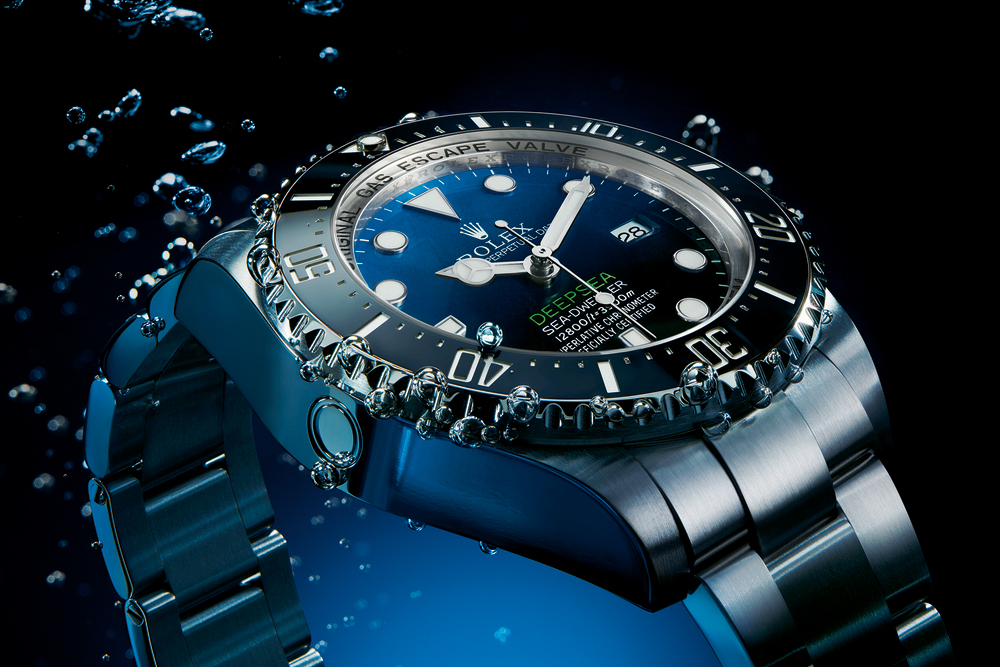 After taking samples and doing a little look-see, Cameron experiences some difficulties with the equipment that halts his abilities to take more samples or explore further. Having been at the bottom of the world for nearly three hours, he presses the button to release the 1,000+ pounds of weights. He listens for their release. If they don’t work, he doesn’t ascend. I don’t know if anyone could explain his thoughts in the brief moments between flicking that switch and hearing the weights release. Courage is not a strong enough word.

The entire exploration, from building the DeepSea Challenger, to the myriad of challenges, set backs and even deaths that the team encountered, and the ultimate voyage, are the subject of the new National Geographic movie: DeepSea Challenge 3D. 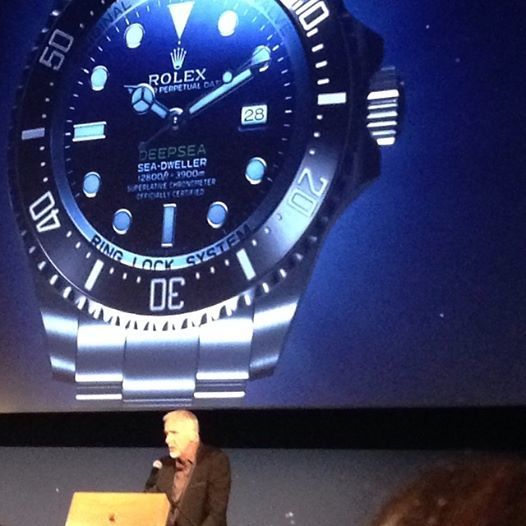 Cameron at the Hall of Ocean Life, American Museum of Natural History

On Monday night, at the Hall of Oceans in the American Museum of Natural History, Rolex, The National Geographic Society and James Cameron held a preview of that 90-minute movie. Filmed by Cameron, the movie is a breathtaking (literally) exploratory tour not only to the deepest point in the ocean – the Marianas Trench – but also into the deepest part of man’s quest for knowledge. The film goes behind the scenes to demonstrate the sheer courage it takes for men and women to follow their dreams and to turn adventure into scientific information and education.

In fact, at the presentation, well-known CBS and PBS journalist Charlie Rose spoke of the courage James Cameron and his team mustered time and again. James Cameron himself talked about loss, heartache and determination. The film reflects the long and sometimes daunting tasks these explorers faced.

“This powerful adventure demonstrates the power of courage that resonates within,” says Gary Knell CEO of The national Geographic Society. “The drive Jim Cameron and his team have to explore the core of our planet, seven miles beneath the ocean’s surface, is incredible. [It shows that] it is individuals that bring the world together.” 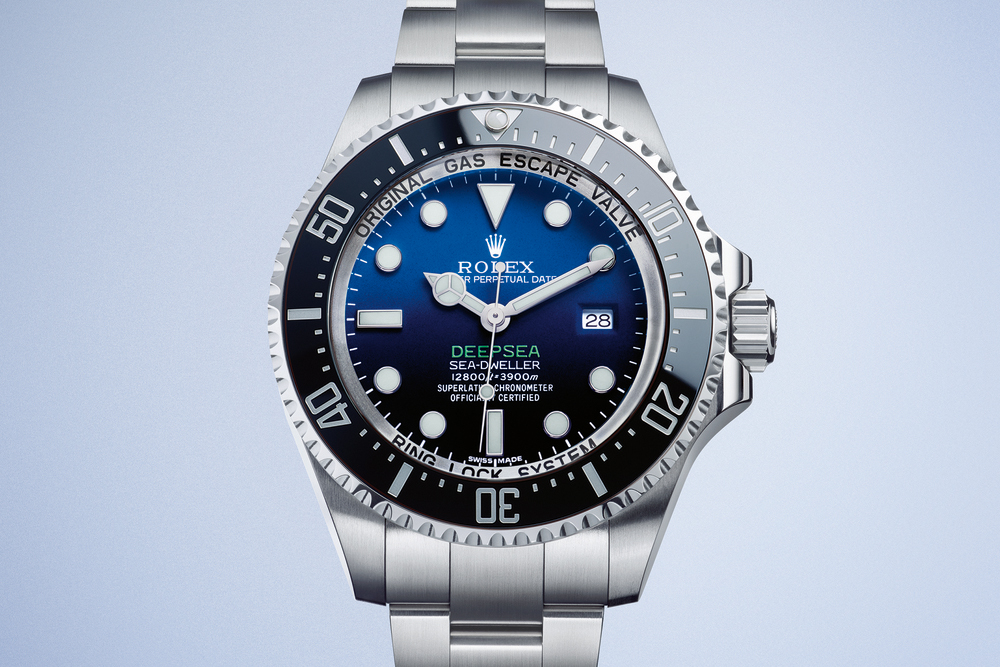 The Rolex Deepsea D-Blue features a gradient dial reflecting the concept of dive, moving from blue at the top to black at the bottom. It is water resistant to 12,800 feet

While the setting of the museum, the magnitude of the underwater exploratory trip as depicted in the film, and the presence of fear, exhilaration and awe could have overpowered the audience, Rolex brought reality back with the unveiling of the watch that celebrates James Cameron and the 2012 trip to the Mariana’s Trench.

The DeepSea Challenge Jams Cameron watch is destined to go down in history as a coveted timepiece not only because of the story behind its making, but also because of the D-Blue gradient dial – something Rolex does not do often. In fact, the dial gradiates from a rich blue at 12:00 down to a pitch black at 6:00 – reflecting the immersion a diver experiences from entering the ocean to descending toward its floor. The watch reflects the model that dove seven miles down strapped onto the DeepSea Challenger’s arm and continued to operate perfectly.

Dubbed the “ultimate divers’ watch,” the Rolex Deepsea new version is water resistant to 12,800 feet – though it clearly sustained deeper depths on Cameron’s wrist in side the Deepsea Challenger. The 44mm Oyster case, reinforced with the brand’s patented Ringlock System, houses the COSC-certified automatic Caliber 3135. With all the legend behind it, one would expect this watch to retail for much more than its DeepSea siblings – but, in fact, it is only approximately $300 more – retailing at $12,350.