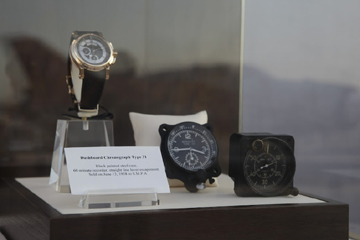 If you are in New York this week- through Sunday July 8th — you won’t want to miss this great Breguet exhibit celebrating a century in aviation-inspired timepieces that is on display at the Breguet Boutique on Fifth Avenue (711 Fifth Avenue, between 55th and 56th Streets).

The exhibition, “Breguet: Watchmaker, Aviator, Innovator,” was unveiled in New York just a couple of weeks ago atop the famed Intrepid, where, amidst a fleet of fighter planes, Breguet hosted a cocktail reception to welcome hundreds of guests as they roamed not only The Intrepid, but also the superb exhibition of 26 Breguet aviation 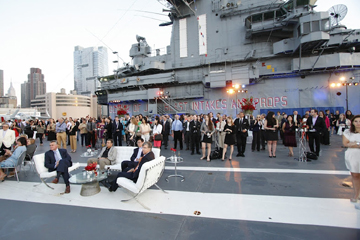 related watches, including 10 vintage timepieces on display for the first time in the U.S.A.

The exhibit draws the relationship between Breguet watches and aviation, which first started in the beginning of the 20th century. In fact, in 1918, Breguet first began producing watches for aviators and developed chronograph mechanisms that were mounted in cockpit instrument panels.  (Interestingly, Louis-Charles Breguet, the great-great grandson of Abraham-Louis Breguet, created Breguet planes in the beginning of the 20th century. The French Ministry of War formed the French Naval Air Arm (Aeronavale) in 1910 and by 1913 was using Breguet equipped planes in its Aeronovale fleet, and did so for 60 years.)

Special Breguet watches on display during the exhibit include the historical  1958 Center Seconds watch, the Breguet Type XX and the new 10Hz technology that is in the Type XXII. Starting in New York City, the Breguet exhibit begins traveling for two months, including stops at the Breguet Boutiques in Bal Harbor and then Beverly Hills.