Around the World: Parmigiani Speeds Along 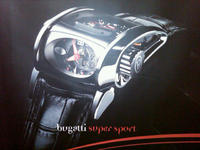 Sitting in the Pichler GFG AG garage, one of the most elite luxury car dealerships in Feutersoey, Gstaad, Switzerland, I am sitting inside the Bugatti Veyron SuperSport 16.4, the world’s fastest production car. It broke records and so now the Bugatti Supersport watch by Parmigiani is the world’s fastest watch. The watch was worn by Bugatti test driver Pierre-Henri Raphanel, traveling at a speed of 431 km per hour – a world land speed record.  In 2010, Parmigiani flipped all the mechanical parts of the new calibre PF372 onto a vertical axis, 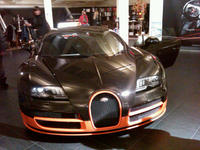 keeping a lateral time display for drivers. In a world premiere the company has a 90 degree time set system and a host of other ingenious features we plan to explore in more detail in the upcoming week in our post show coverage. But suffice it to say that this is the sleekest, fastest, coolest caliber for the Bugatti yet.