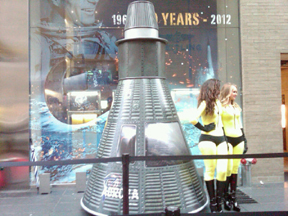 In New York City last week, Breitling celebrated the 50th anniversary of Scott Carpenter’s three-orbit space flight aboard the Aurora 7 capsule (see yesterday’s “A Moment in Time” with Scott Carpenter).  To celebrate, the brand also brought in esteemed astronaut Mark Kelly and Russian cosmonaut Sergey Volkov.  Sergey is the only second-generation cosmonaut in the Russian space program and Kelly has a brother who is also an 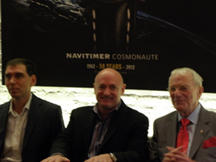 Volkov, Kelly, Carpenter astronaut – so the pair share a common bond.  Together, the three pioneers in space exploration openly discussed with select journalists, their experiences in space, with Kelly reflecting, “The faster you travel, the slower time passes.” 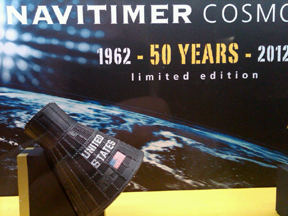 Of significance was the concept of today’s camaraderie amongst nations, as compared to the Cold War era when Carpenter flew.  “Now, with the international space station, we share the successes and the disappointments”, says Volkov.  “It is a single environment there, and we are one crew no matter our nationality.”

To celebrate this monumental 50th anniversary, Breitling took the opportunity at this event, studded with a few other notable astronauts, to unveil the new Limited Edition Navitimer Cosmonaute watch – created in a limited edition of 1,962 pieces in honor of that year in flight. Carpenter had sent Breitling a letter back in the early 1960’s stating that he loved the Navitimer watch with built-in slide rule that he had seen on Australian 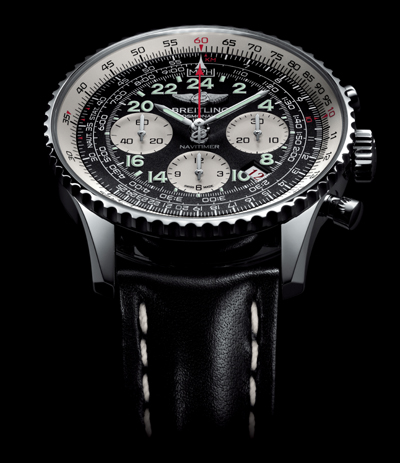 pilots’ wrists, but that he would like the same watch if it also had a 24-hour indicator. Just days before his flight, he received from Breitling just such a Navitimer watch, with the word Cosmonaute on it. He loved that concept and wore the watch in space on his first journey on May 24, 1962. It was the first space-going wrist chronograph.

Today’s newest high-performance Navitimer Cosmonaute houses the Manufacture Breitling movement, Caliber 02, entirely developed and produced in house. It features a 24-hour display, slide rule bezel and chronograph functions. The manual-winding watch depicts the Aurora 7 mission insignia engraved on the caseback. The COSC-certified 50th anniversary Navitimer Cosmonaute is a 43mm stainless steel case with a black dial with silver counters, and offers a Celsius/Fahrenheit conversion scale. It beats at 28,800 vibrations per hour and offers 70 hours of power 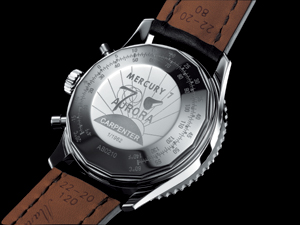 reserve. Its cambered sapphire crystal is glare-proofed on both sides and the watch is water resistant to 3 bars.  It retails for approximately $8,295.