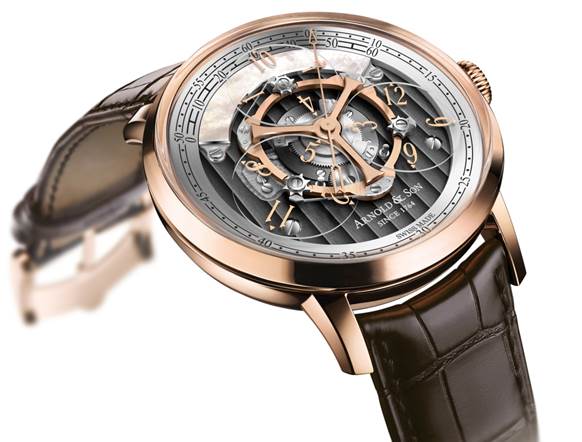 There is just no getting around the fact that Arnold & Son superbly embraces traditional watchmaking and visionary thinking. We have written about this brand with a rich British history so many times here before — as they regulary release ground-breaking timepieces.  Well, 2015 is no exception.

The new patented, world-fist watch combines the wandering hour (also known as jumping hour) complication with a true beats second complication (sometimes referred to as a deadbeat seconds). Called the Golden Wheel — so named for the solid gold time carrousel with the true beat seconds hand from the central axis squarely visible on the dial side the watch — the watch is a unique three-dimensional interpretation of the ancient wandering hours complication that has roots in British table clocks of the mid-17th century. 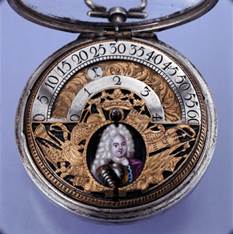 Part of the Instrument Collection, the Manufacture movement  (which was three years in the making) enables the seconds to beat incrementally as opposed to sweeping along the dial – allowing for more accurate reading. With the mechanism visible from the dial side in all its glory, the watch is a visible beauty. It utilizes three separate transparent sapphire disks (that seem to float above the dial) for the hour indication and elevates many of the movement parts for incredible 3D allure.  The mother-of-pearl arc displays the current hour, and the true beat seconds indication is displayed via a large graduated outer ring on the dial and read via a golden hand. Gold arrows on the hour disks point to the minutes dial-frame located above the hours arc.

The A&S6018 is a mechanical self-winding movement with 29 jewels and 232 components. It beats at 28,800 vibrations per hour and offers 50 hours of power reserve.The movement is meticulously decorated in palladium with haute horlogerie finishing, including hand-chamfered bridges with polished edges,  Côtes de Genève rayonnantes, and mirror-polished heads. Just 125 pieces of the 44mm  18-karat 5N rose gold Golden Wheel will be created.