An In-Depth Look at the $195,000 Louis Moinet Space Mystery Watch, It Goes Where No Man Has Gone Before 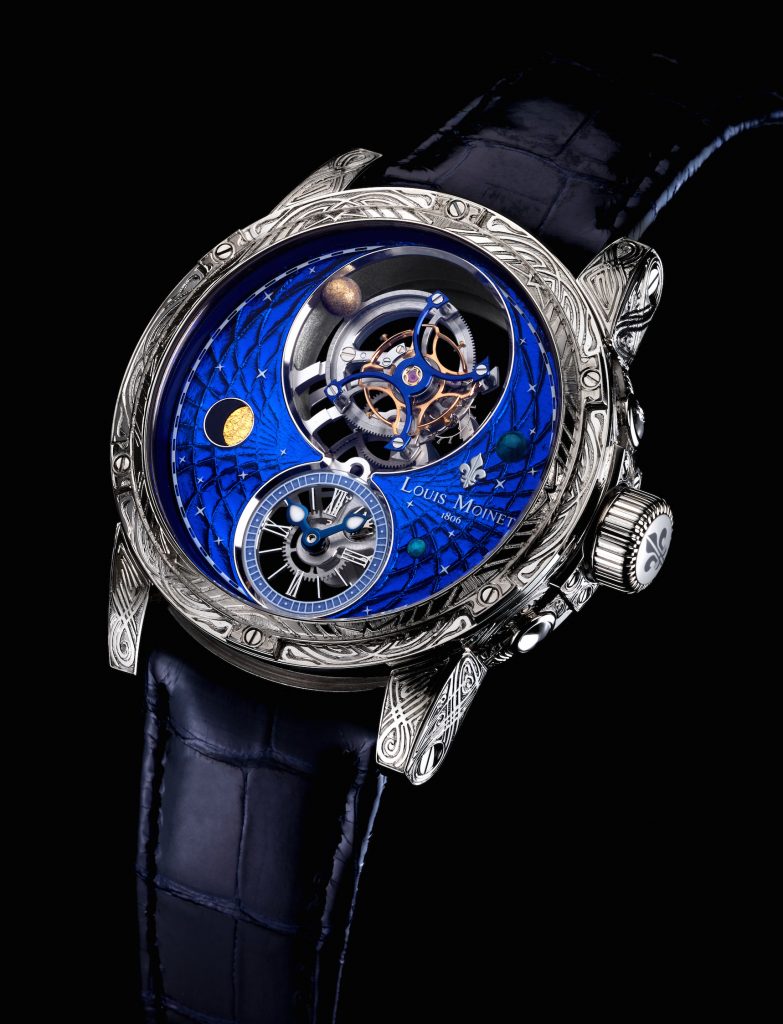 Always on the cutting edge of design and technology, independent watch brand, Louis Moinet, takes the concept of life and time – and its origins—to new heights with the unveiling of the alluring Louis Moinet Space Mystery watch.

Earlier this year, at its exhibition space in Baselworld, Louis Moinet had a metal and wood time-travel machine set up. Always one for some adventure, I stepped into the machine and was treated to a world of dinosaurs, Earth, space, evolution and more. It was a couple of minutes of time travel that reminded me how fleeting time really is and how our lives have evolved over centuries of time. 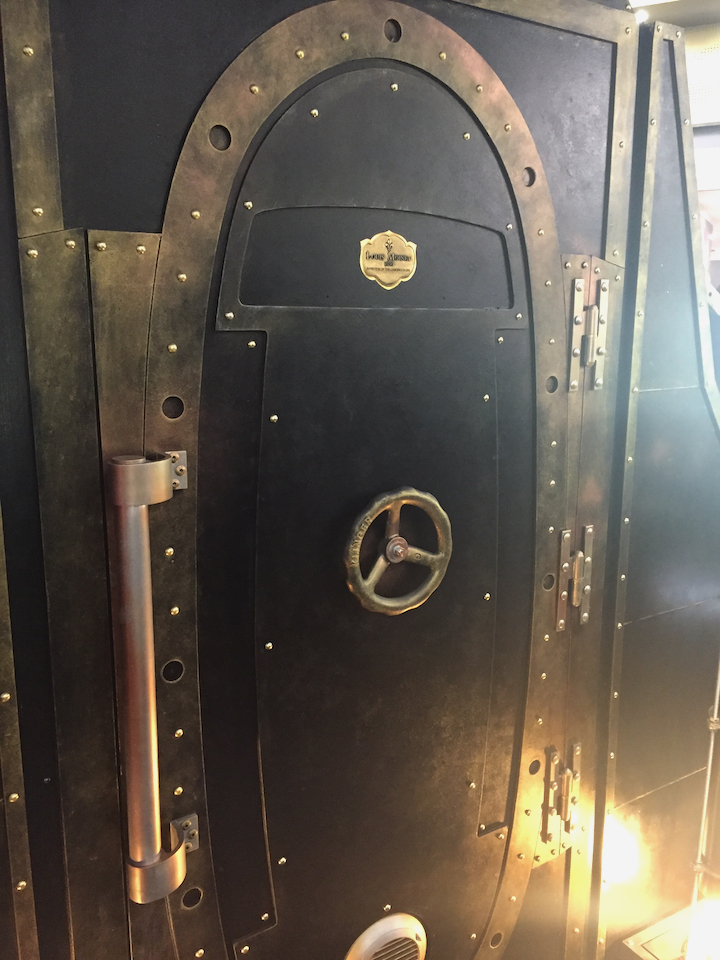 The doorway to the Louis Moinet Time Machine at Baselworld 2017.

When I stepped out of the machine, I found myself right back where I started: Baselworld, in the Louis Moinet exhibition space. There I was treated to a look at some of the most fascinating watches the brand has to offer. We already broke the news of the Louis Moinet Whiskey watch made in collaboration with Wealth Solutions and containing a drop of the oldest whiskey in the world inside – that we got a sneak peek at during the show. You can read all about that watch here.

Next we got our hands on the incredible Louis Moinet Space Mystery watch, which is also special for a host of reasons, not the least of which being that this world-first watch was two years in the development stages. 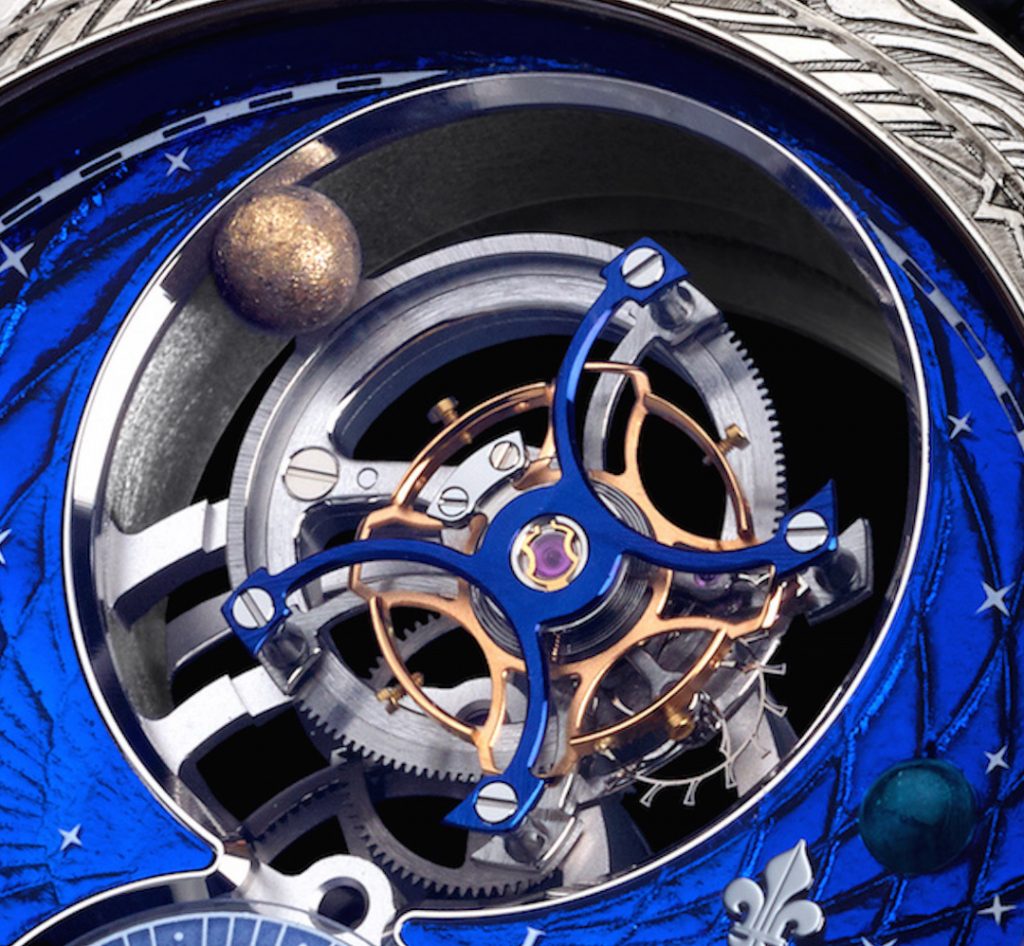 The over-sized tourbillon cage of the Louis Moinet Space Mystery watch is balanced by an orb that rotates around it, and the tourbillon also rotates.

First, let’s take a look at the technology of this world’s first watch. The Space Mystery is the first satellite tourbillon®, wherein the outsized (13.59mm in diameter) tourbillon cage is balanced by a tiny planet that rotates around it. Both the orb and the tourbillon at 12:00 seem to float in space between the two sapphire crystals, and the tourbillon cage is actually floating 1.8mm above the watch dial. Not only does this satellite tourbillon rotate on its own axis, but also it is in orbit as its own satellite planet, revolving every 60 seconds, and the axis of rotation is different from the hours and minute hands. The Louis Moinet’s Caliber LM48 Space Mystery features a balance wheel and bridge crafted in authentic Louis Moinet style with the upper portion made in blued titanium. The escapement is visible via the caseback, as well. 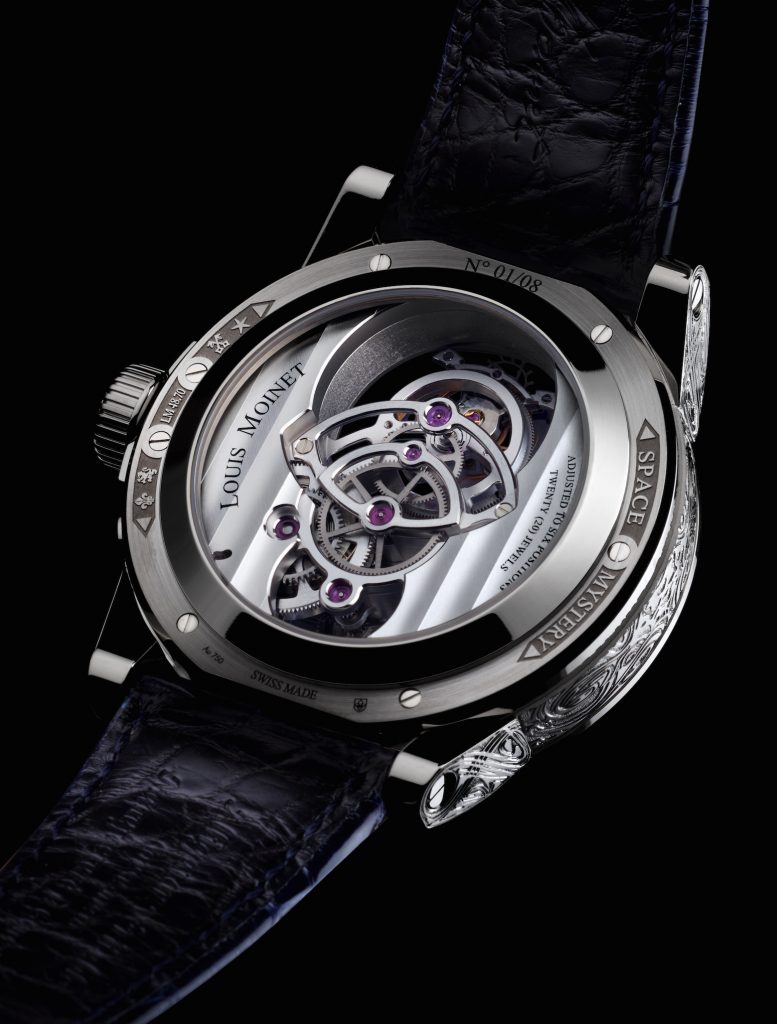 The caseback of the Louis Moinet Space Mystery watch reveals the tourbillon, as well.

Beyond the complicated movement of this stunning watch are a few more unique details that include the magnificent color of the dial (top secret) and the use of a highly unusual meteorite. The 46mm Space Mystery features one of the boldest, richest blue dials we have ever seen. The color, Magic Blue, is a secret composition that offers depth and beauty, and that can only be replicated by Louis Moinet. 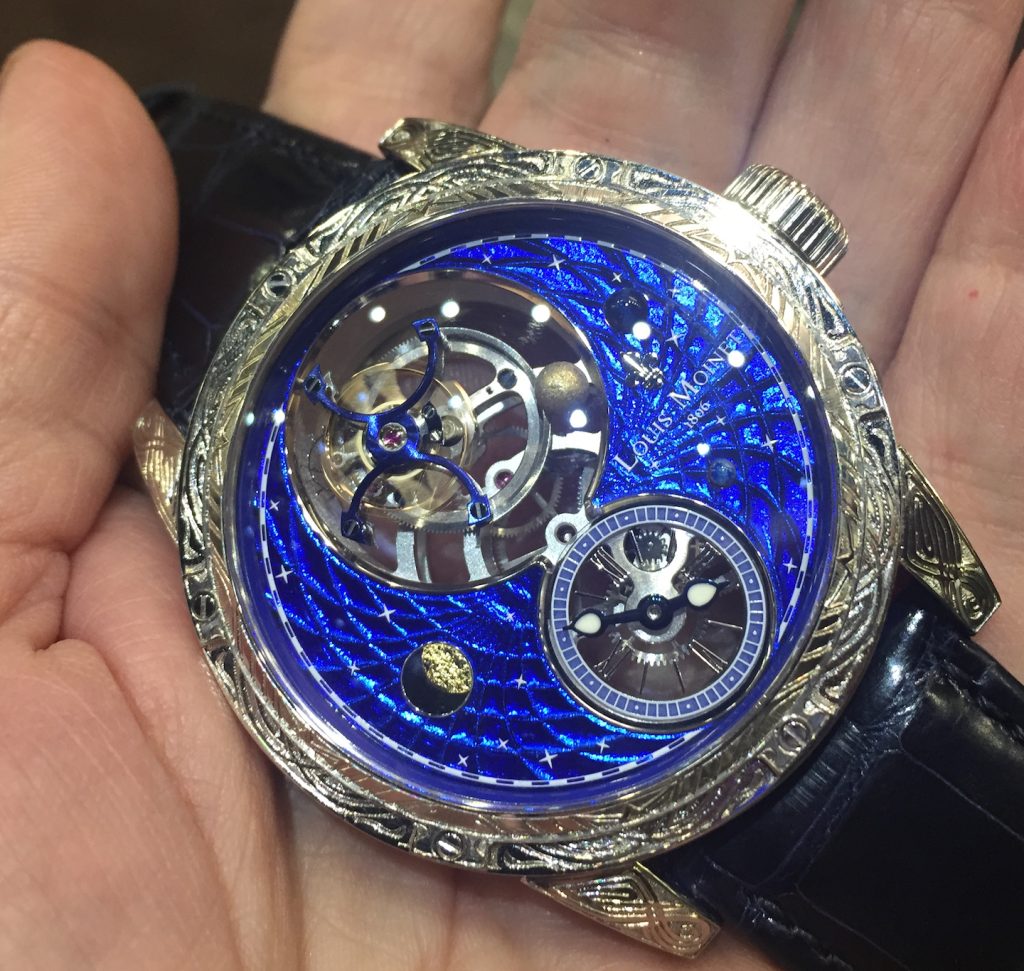 The Magic Blue dial of the Louis Moinet Space Mystery watch is a top-secret composition.

If the dial color and outsized tourbillon cage with unique planet balance isn’t enough to have you taking notice, lets tour the dial and check out the aperture at 9:00 where an authentic fragment of meteorite sits. Louis Moinet has long used meteorites and other unusual materials (fossils, etc.) for its dials. This meteorite fragment, however, is different from most others in that it has traces of amino acid – the one thing necessary for life form – in it.

At 9:00 on the dial of the Louis Moinet Space Mystery watch, a tiny piece of meteorite containing amino acids is embedded.

Called carbonaceous CM chondrite meteorite, the meteorite with thes amno acid traces could bethe first sign of life in the outer galaxy. Amino acids are organic compounds that play an important role in cell structures of living organisms. It is unknown where this meteorite came from. Space Mystery is the first timepiece in the world to include these authentic fragments.

“The origin of the carbonaceous CM chondrite meteorite is a mystery,” says Jean-Marie Schaller, head of Louis Moinet. “The presence of non-terrestrial amino acids could indicate that it originated outside our solar system over 4.5 billion years ago. This was an exceptional creative catalyst for us – and represented a huge responsibility, too. It’s not every day that you get a chance to display the origins of life in the Universe.”

Louis Moinet Space Mystery watch features a fragment of the moon and of Mars embedded into the case side.

According to Schaller, he felt a great responsibility to portray the CM meteorite properly, and so a specially designed case was necessary. The Space Mystery case is entirely hand-engraved and hand-polished. Flanking the crown on either side are authentic heavenly body fragments: one from Mars and one from the Moon. Just four editions of eight pieces (representing infinity) will be made. The watch retails for $175,000 in 18-karat rose gold and $195,000 in 18-karat white gold.

Introducing The Vacheron Constantin Year Of The Rabbit Watch
June 14, 2017