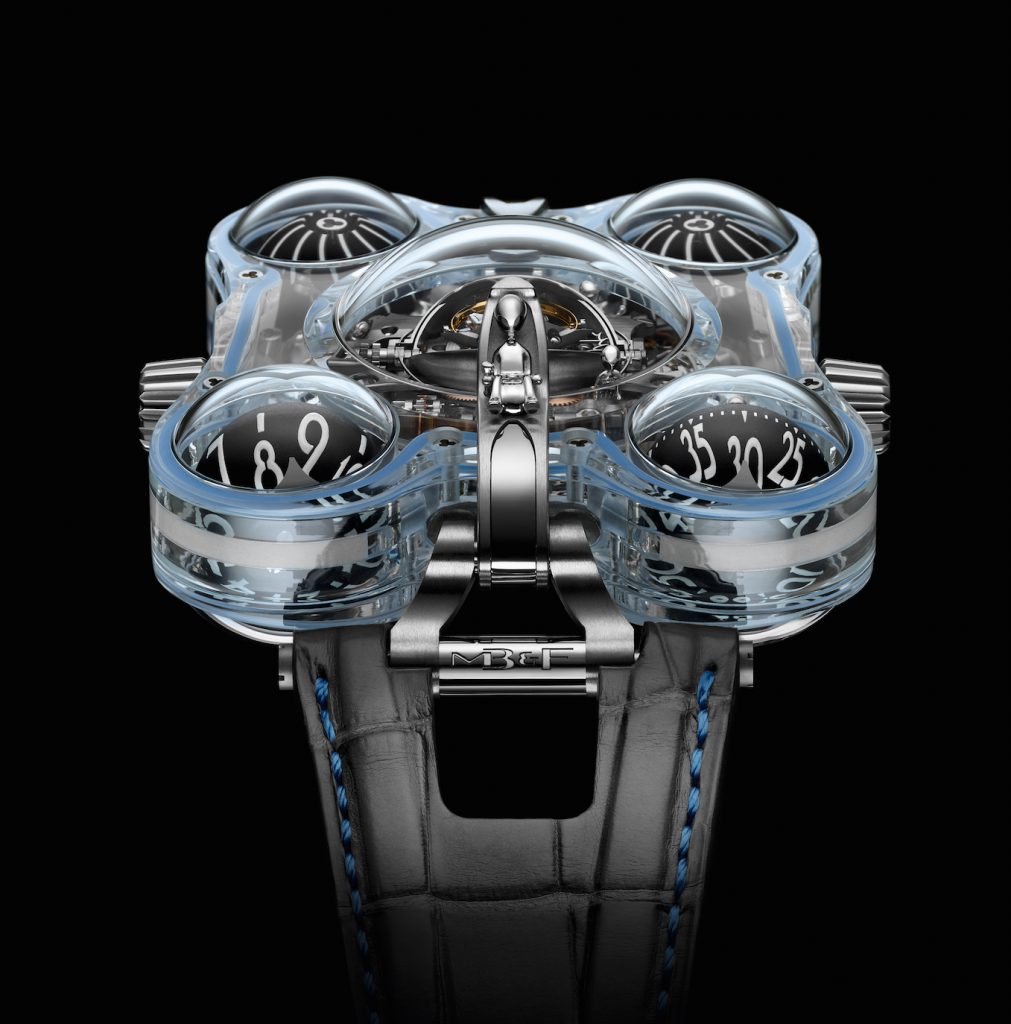 MB&F Horological Machine No. 6 Alien Nation watch — with aliens inside.

Those familiar with MB&F know how space-inspired the brand is. As such, it will come as no surprise that the newest creation, HM6 Alien Nation, is pretty out of this world. A series of four unique pieces were made – each with a case entirely crafted of sapphire, and each with cosmic glowing effects, and each retailing for $500,000. Stop drooling. They’re all sold. Want to get even more jealous? They all sold to one collector. 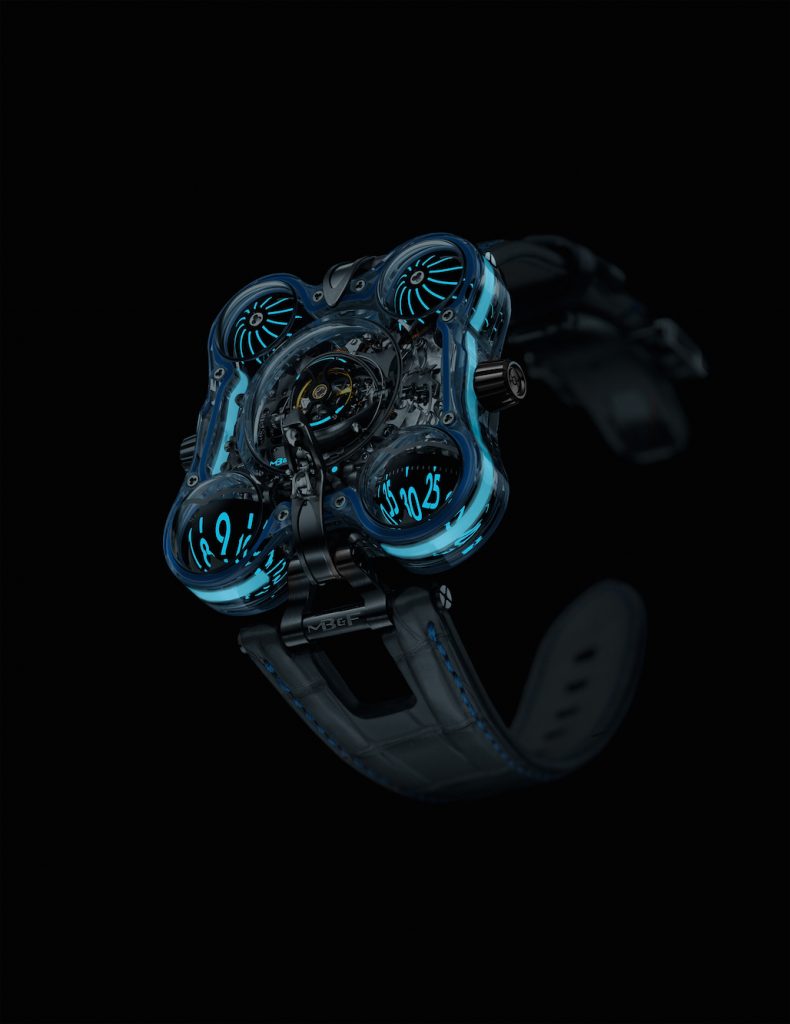 The MB&F HM6 Alien Nation watches are created in a limited edition of 4 pieces, each with a different color lumen.

What made these particular HM6 watches ever so appealing? The 12 different case components made in sapphire that required 510 hours of precise machining and polishing and that come together seamlessly could be the key . . . Or, it could the lume of the watches. To create these newest pieces, MB&F mixed Super-LumiNova and AGT Ultra (the same material the brand worked with when it unveiled the Black Badger watches) and highlighted different parts of the movement and case in different colored hues: turquoise, green, blue and purple. This could have been the hot button. 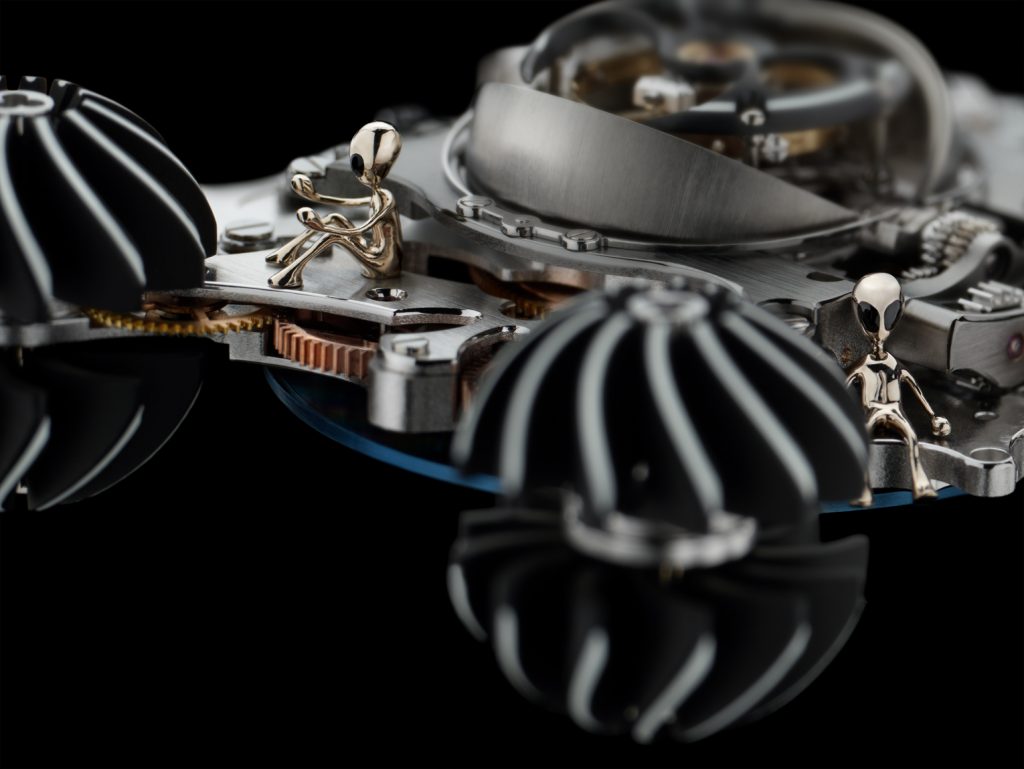 In addition to the pilot alien that sits in the MB&F HM6 Alien Nation case between two of the turbines, there are five more alien crew members inside the watch.

However, I sense it was the fact behind the HM6 Alien Nation name: the aliens. Yes, MB&F outfits each watch with a crew of six miniature-handcrafted aliens. One pilot sits outside the crystal case that serves as the alien ship, and his crew of five others man the engine. Each tiny alien is hand-sculpted in 18-karat white gold by artisan Olivier Kuhn of Atelier-Creation Kuhn. Each takes approximately 34 hours to complete – or a full month to finish the crew of six.

The five aliens that accompany the pilot on his space mission are visible in the movement of the radical HM6 Alien Nation. The result of three years of development the highly complex 496-part movement topped by a 60-second flying tourbillon with retractable shield is the same as is used in the previous HM6 watches. The only difference is that the aliens have invaded the movement of these four watches. 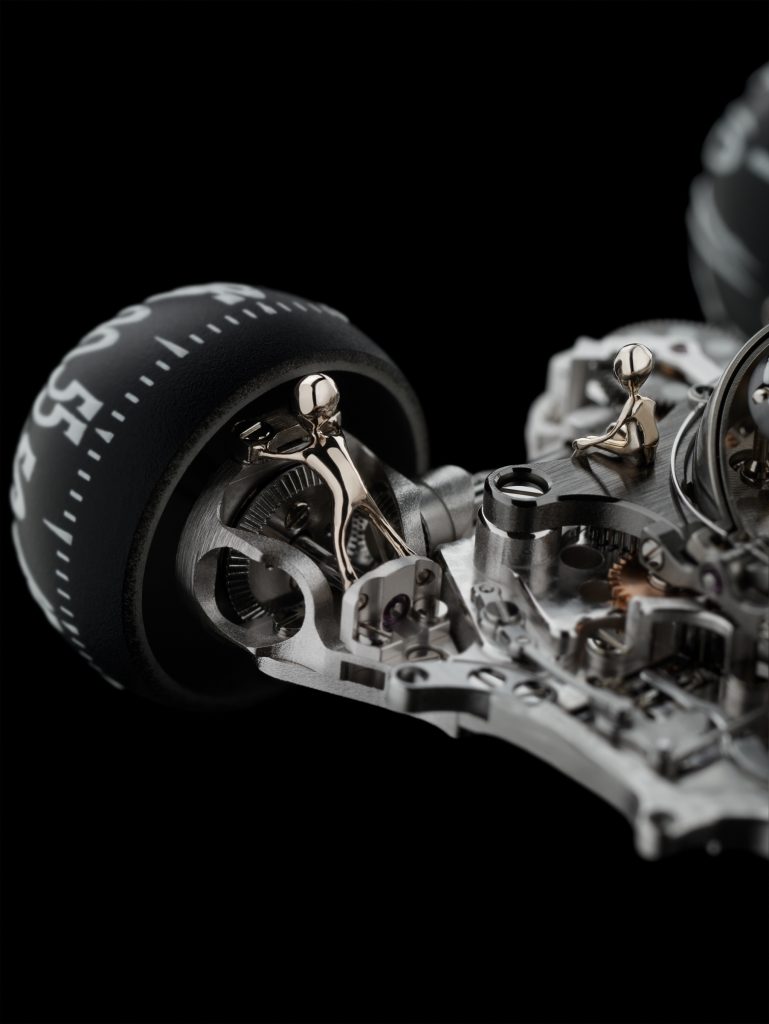 The aliens of the MB&F HM6 Alien Nation watch are sculpted in gold by Olivier Kuhn. 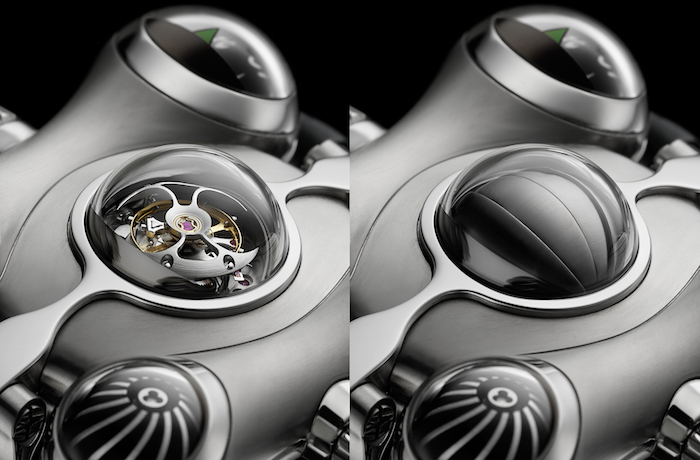 A close up look at the MB&F HM6 Alien Nation tourbillon with retractable shield.

Platinum 950 battle-axe automatic winding rotor matching the version: green for the green version, blue for the blue and turquoise and purple for the purple. 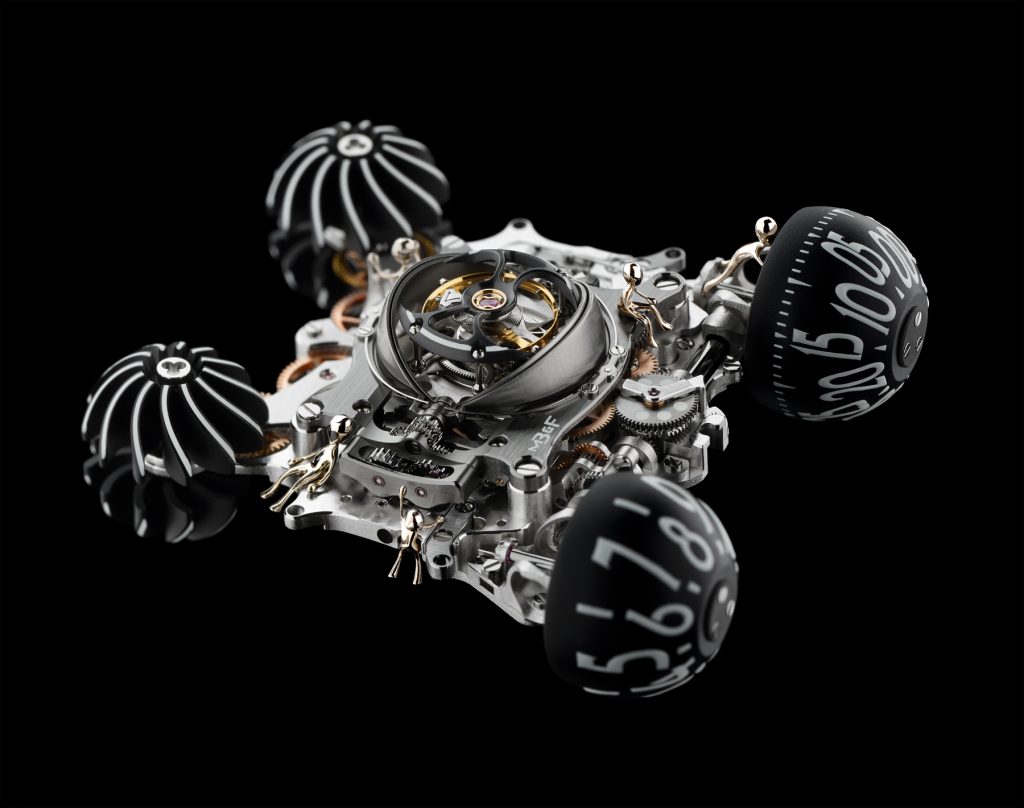 In total, six aliens man each of the MB&F HM6 Alien Nation watches.

Aliens: manufactured in white gold. There are 5 different aliens inside the movement and 1 on the case.

Super-LumiNova: applied on the turbines, dials, friction wheel, the MB&F logo on the top of the movement and the tourbillon’s bridge battle-axe. Green Super-LumiNova on the green version and blue on the purple, blue and turquoise versions.

Gaskets: Gaskets matching the AGT Ultra colour. Blue gasket for the AGT blue, green with the AGT green, purple with the AGT purple, and light blue for the turquoise AGT. 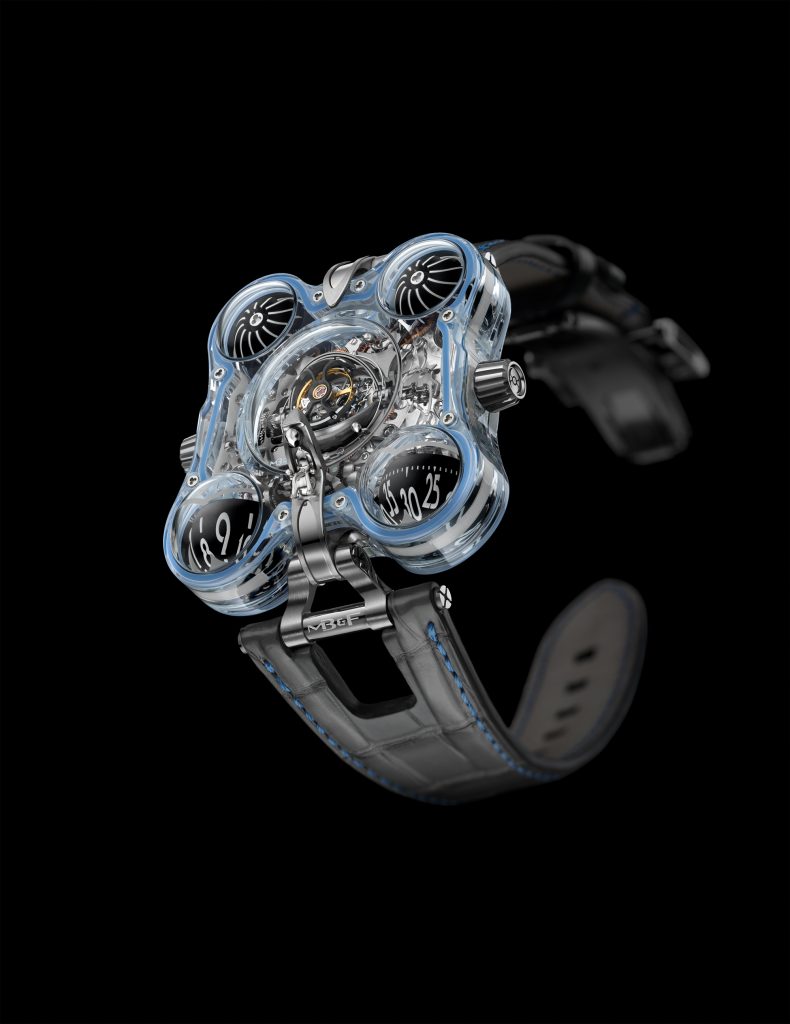