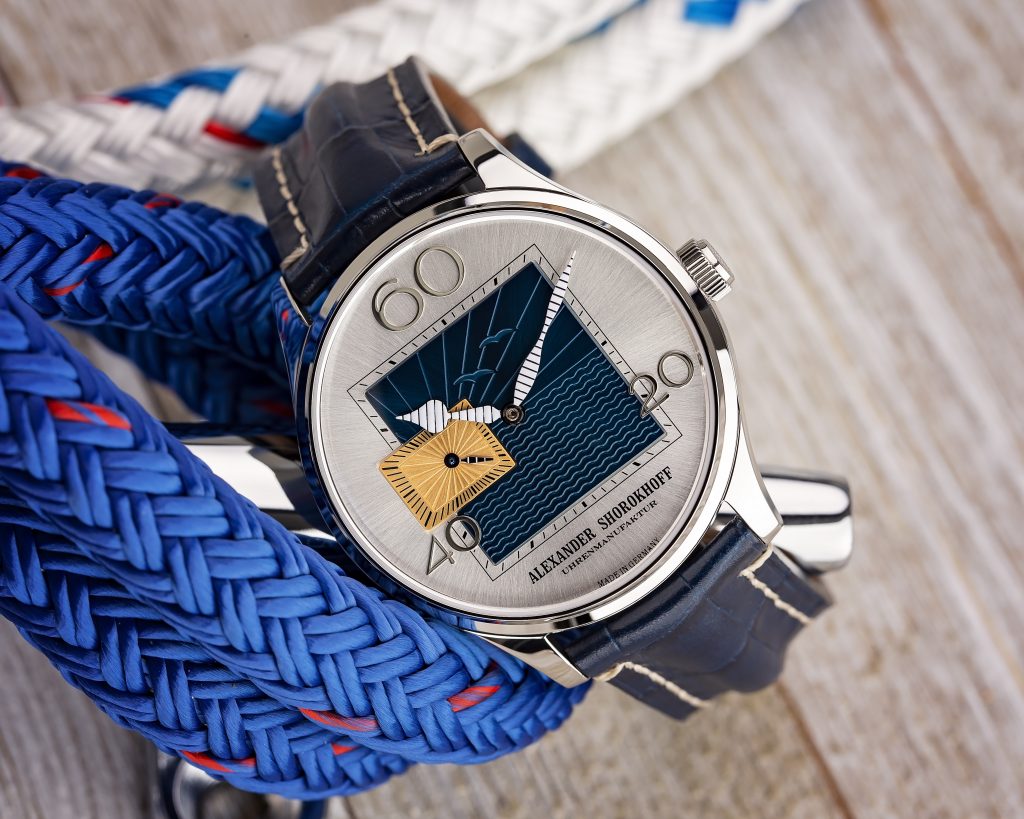 Independent watch brand, Alexander Shorokhoff makes some of the most creative, relatively affordable watches currently on the market. Made in Germany, the Shorokhoff watches are generally bring art and aesthetics into play in a big way, and the newest Alexander Shorokhoff Newport watches — honoring Newport, RI — are no exception. Newport, a well-known picturesque seaside city in Southern Rhode Island, is the go-to New England summer destination with historic mansions lining expansive white sand beaches and sailboats dotting the sea. This quintessential city also has a deep-rooted place in U.S. history. During the 18th century Colonial era, Newport was a major port city – drawing business men and elite families, alike. As time continued through the 19th and 20th century, more and more of the nation’s wealthiest families constructed cottages, large mansions, and summer houses in the town.

Inspired by this revolutionary city, rich with cultural influence, Alexander Shorokhoff designed the exclusive Newport watch, in collaboration with its American partner, Ray Grenon of the luxury retail jewelry store Grenon’s of Newport. There was an initial roll out of two engraved timepieces (see below), and now there is a stunning all-new version. 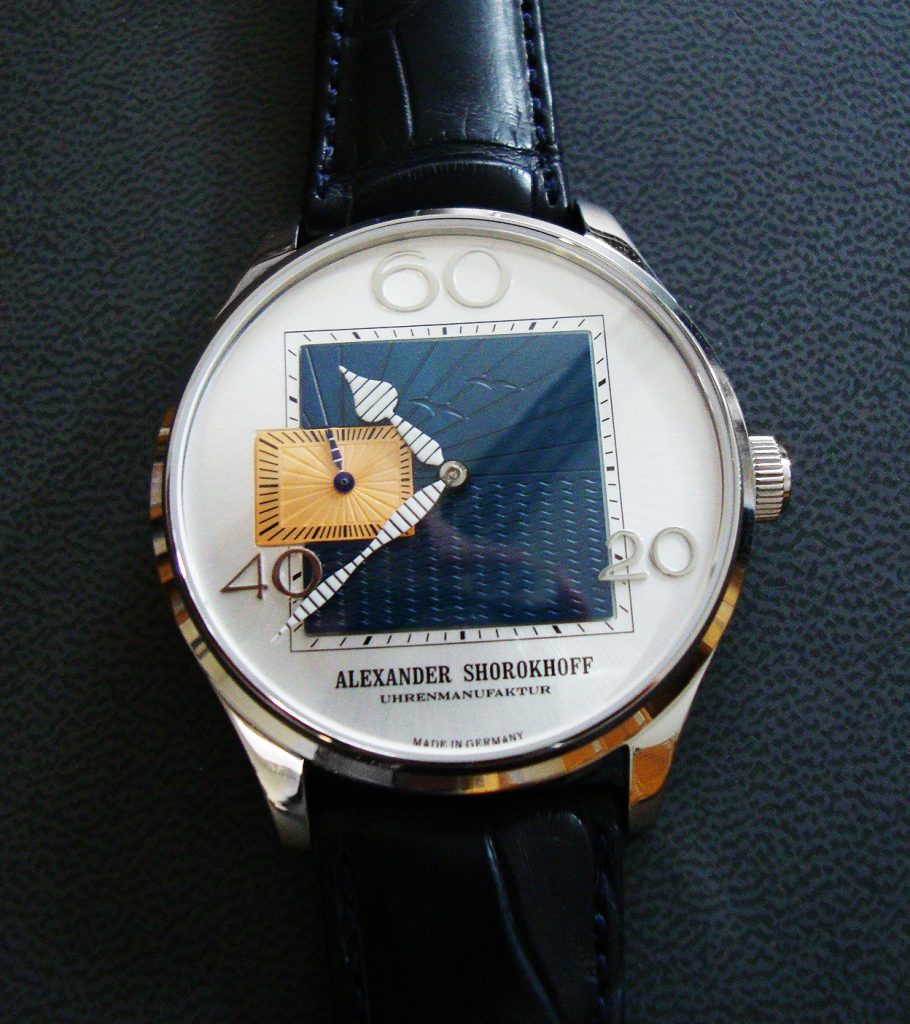 The newest version of the Newport watch reflects the beauty of this seaside town’s maritime history in a new way. The 43.5mm round watch features a white dial with an inset large metallic blue square with an intricate engraving of seagulls floating above the sea. A smaller, gold-plated rectangle inset at 9:00 on the dial, symbolizes the sun in this landscape and houses the second hand. White and navy blue striped hands – a classic nautical theme – indicate the time. The second men’s timepiece mimics that of the Newport 1 featuring an automatic cal AS 14069 movement with a power reserve of 42 hours and functions including hours, minutes and small seconds. Just 10 pieces are being made.

This watch is truly a beauty. Anyone who loves the ocean will love this watch. While it may be inspired by Newport, RI, it is a timeless piece that could reflect any of the world’s seas.

In the initial roll-out of the collection, there were two different watches made for men and women: a 39.5mm version for women – made in a limited edition of 39 pieces, and a 43.5mm version for men, created in a series of just 16 pieces. The men’s and women’s watches feature incredibly different dials. 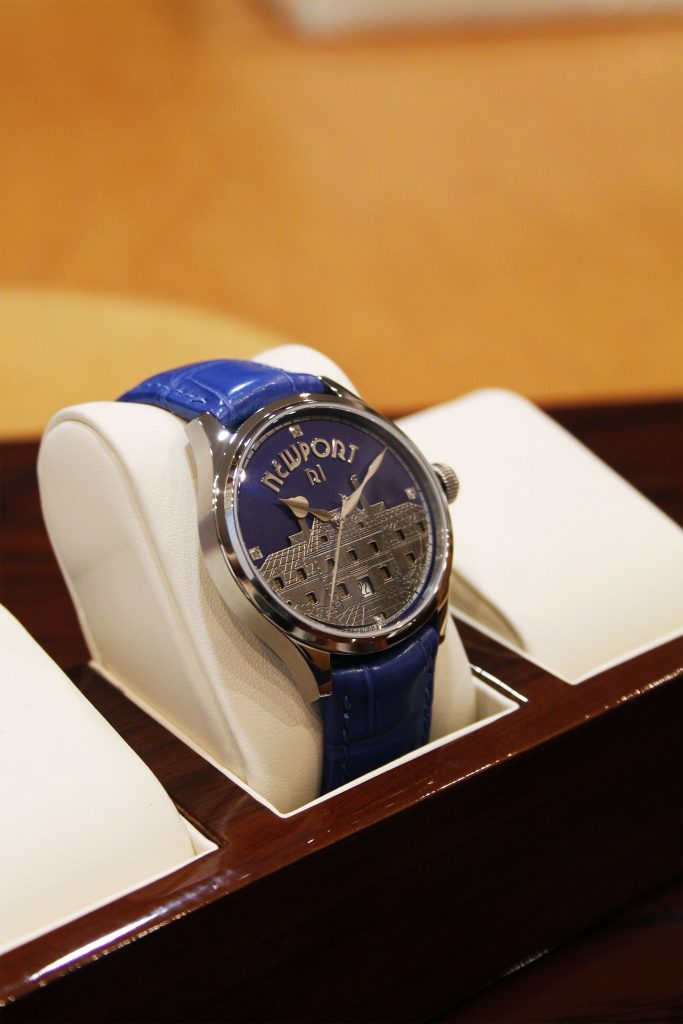 The Lady Newport, crafted in stainless steel and powered by an automatic movement, features an intricately hand-engraved mansion on it. The mansion is created in silver, fully engraved with tiny detailing, and blackened for a three-dimensional effect. It occupies the entire lower half of the dial, except for a date window at 6:00. The words “Newport, RI” are applied at the top of the dial using an Art Deco/ Great Gatsby –inspired font. The watch is water resistant to 5 atm, and finished with an alligator leather strap.

The men’s Newport, also featuring an intricately engraved mansion, brings forth another element through a small seconds dial at nine o’clock, radiantly decorated with the American flag. It bears the insignia 1639- for the year Newport was founded. The Newport men’s watch features an automatic cal AS 14069 movement with a power reserve of 42 hours. The timepiece’s hours, minutes and small seconds function are all housed within a stainless steel case, and finished with an alligator leather strap. In a nod to the maritime theme, an anchor sits at the 6 o’clock index.

The Newport watches are available exclusively in Newport, Rhode Island, through Grenon’s of Newport and retailers interested in carrying the line should contact Ray Grenon, distributor of Shorokhoff.