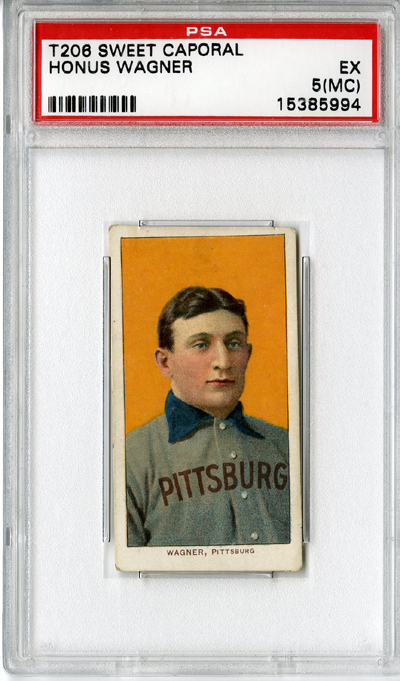 Sports lovers and collectors – pay attention: you most likely will want to wander in to New York before March 28 and head over to the Audemars Piguet flagship watch boutique at 65 East 57th street to view the incredible Honus Wagner T206 card on display there.  The Honus Wagner cigarette card – since 1909 – represents the pinnacle of sports card memorabilia. “The Jumbo Wagner” on display is one of the highest graded editions of the 1909 T206 Honus Wagner card. It is up for sale through April 5 by Goldin Auctions.  Currently the card has a bid of $1.175 million.

Issued by the American Tobacco Company, from 1909-11 as part of the T206 series, less than 200 Wagner cards were ever issued.  Production of the card was halted after Wagner, the Pittsburgh Pirates star shortstop, requested the tobacco company to stop including his image in the cigarette packs.  As a result, there have been less than 50 authentic Wagner cards submitted for authentication and/or grading by the major card grading companies.

Audemars Piguet, the world’s oldest watch manufacturer still in the hands of its founding families opened its new 3,000 sq. ft. Flagship New York Boutique in 2009, and is the perfect setting for this incredible card to be on display. The boutique is open Monday through Saturday from 10 am to 6 pm,   and the card can be viewed starting today though to March 28.