Born and raised in the South Side of Chicago, Octavio Garcia is one of Switzerland’s foremost watch designers today. In fact, the 43-year-old designer holds the position of Chief Artistic Officer at Audemars Piguet, one of the world’s finest privately owned  Swiss luxury watch brands, and has spearheaded the design of the brand’s 40th anniversary collection of its famed Royal Oak watch. 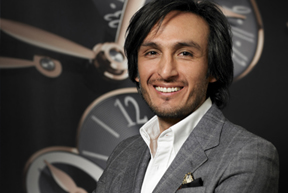 One of five children, Garcia lived in Chicago until he was 22 years old, and played by his own rules. “My childhood was very contrasted, but rich with emotions,” says Garcia, who dropped out of high school to earn money. He worked odd jobs in the steel industry, automotive industry and the like, and along the way earned his GED. By the age of 22, Garcia was restless and moved to Europe, where he found true love. He met and fell in love with a Swiss girl, whom he moved to Switzerland for (and eventually married).

“When I moved to Switzerland, I decided to look for a school to go back to for an education. I didn’t speak French then, so needed an English-speaking school and something close by,” says Garcia – who today is fluent in French. He happened upon the Art Center College of Design. “I had always loved architecture and felt art was my strength. When I went to an open house at the school, I saw a man in front of a scale model BMW, sawing it in half. I went over to talk to him and it turned out he was an automotive design at the school, and this was his project. I was hooked.”

Garcia graduated with a degree in Industrial design, and worked for a short time  at furniture finishing before moving on to Omega Watch Company, where he spent five years. Then, nine years ago, he happened upon an ad in a local Swiss newspaper for a watch designer at a key brand. He answered the ad, and the rest is history. Garcia joined Audemars Piguet in 2003 and has brought his own sense of contemporary style to the brand.

Over the past near-decade, he has redesigned and brought to the forefront, the brand’s Millenary classic  watch collection, and has worked diligently for the past three years preparing, planning and designing the new 40th Anniversary Royal Oak collection. Designing a new collection for a legendary line is a daunting task, but one Garcia took to with gusto.

“We all discussed what we could to pay homage to the 1972 ground breaking watch, and agreed that offering pure, sophisticated beauty was key. Often I am inspired by fashion or the automotive industry, but for this creation, I turned to our museum, where I got a great deal of inspiration.”

The new 40th Anniversary series includes several amazing pieces that recall the original tapestry dial design in updated appeal that is produced entirely in-house—offering a grid work dial pattern that is crisp, clear and alluring. The new pieces also feature other completely redesigned graphics or features for a more horological appeal. Among the new creations is the Openworked Extra-Thin Royal Oak Limited Edition 40thAnniversry Limited Edition  in 950 platinum , and the 39mm 247-part Extra-Thin Royal Oak, which comes as close to the original as possible but is definitely a product of today’s times.

“I am drawn by the aesthetics of the brand, and love to take it to the next level in all I design.Our clients are demanding and expect excitement from us. We need to deliver.” (Portions of this interview appeared in April Michigan Ave Magazine.)