A Moment in Time: Nicole Kidman on Omega 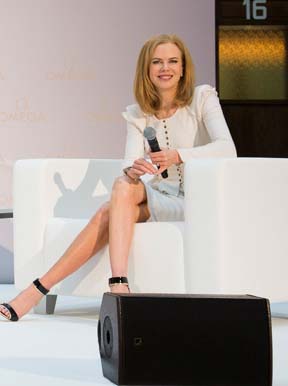 What happens when a famous photographer, award-winning Actress and legendary watch company team up together? Something inspiring occurs in time. In fact, that’s precisely what happened when Omega Watch Company launched its all-new Ladymatic mechanical watch series two years ago, and when it just recently released stunning new 18-karat gold and steel two-tone versions with Kidman in Vienna. Here, Kidman talks about teaming with Omega.

Concerning the role that time plays in her life, Kidman says, “I’ve realized that particularly as you get older, time is the most precious thing. You can’t buy it; you can’t get it back. Really, it’s the most important thing. These days, I’m always aware of how I allocate my time in terms of films and family life.”

“Time is strange to discuss time on a philosophical level – but it is something I love talking about,” says Kidman, who adds that working with Omega is a positive experience because they care about women and causes. “They are committed to philanthropic activities and have been very supportive of my work with UN Women.”

About the product and her feelings on it, Kidman says, “It is easy to support this line that they made just for women. It has many different versions and I, as an actress, have many different sides to me so it fits me perfectly. I enjoy wearing it day or night.”

Photographed for the Ladymatic campaign by renowned photograph Peter Lindbergh, Kidman was quite at home behind the scenes. “I just adore Peter,” says Kidman. “He’s very smart and really can work with movement which is important for me. I don’t like photographs that take too long to shoot. I like the spontaneity and feeling free. Those are the elements that are communicated in these pictures. I still feel like I’m playing dress up.”