It was just recently that TAG Heuer announced its newest Carrera Sport Chronograph watches — slated to be out this fall. The watches are in celebration of the brand’s 160th anniversary and in celebration of its first true racing chronograph: the Carrera. That  watch, introduced nearly 60 years ago was the brainchild of Jack Heuer. The celebration TAG Heuer Carrera Sport Chronograph collection is inspired by the original piece, and has a lot to offer at an affordable price. 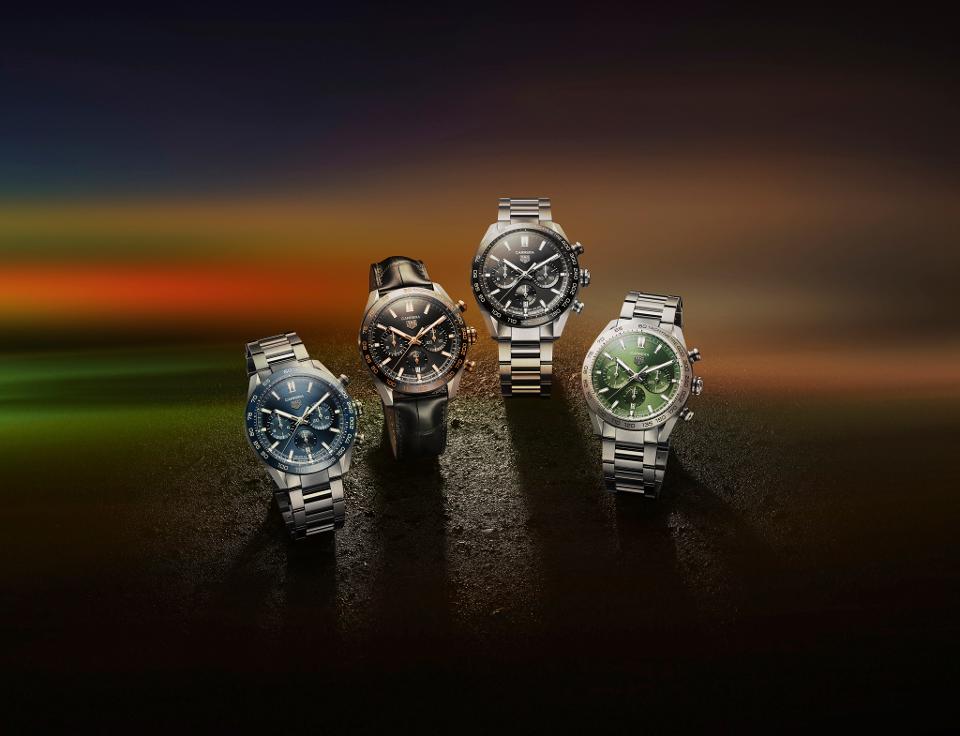 I wrote extensively about the new TAG Heuer Carrera Sport Chronographs on my Perfect Timing column on Forbes. Here, we bring you some of those details.

The TAG Heuer Carrera watches were first released in 1963. They were the brainchild of Jack Heuer, then CEO of the brand, who was enthralled with auto racing in general and particularly with the Carrera Pan Americana races that he had learned about a year earlier. The race was a border-to-border event that took place on the open roads of Mexico and was considered one of the most dangerous races in the world. In fact, it only took place from 1950 to 1954 before it was canceled. 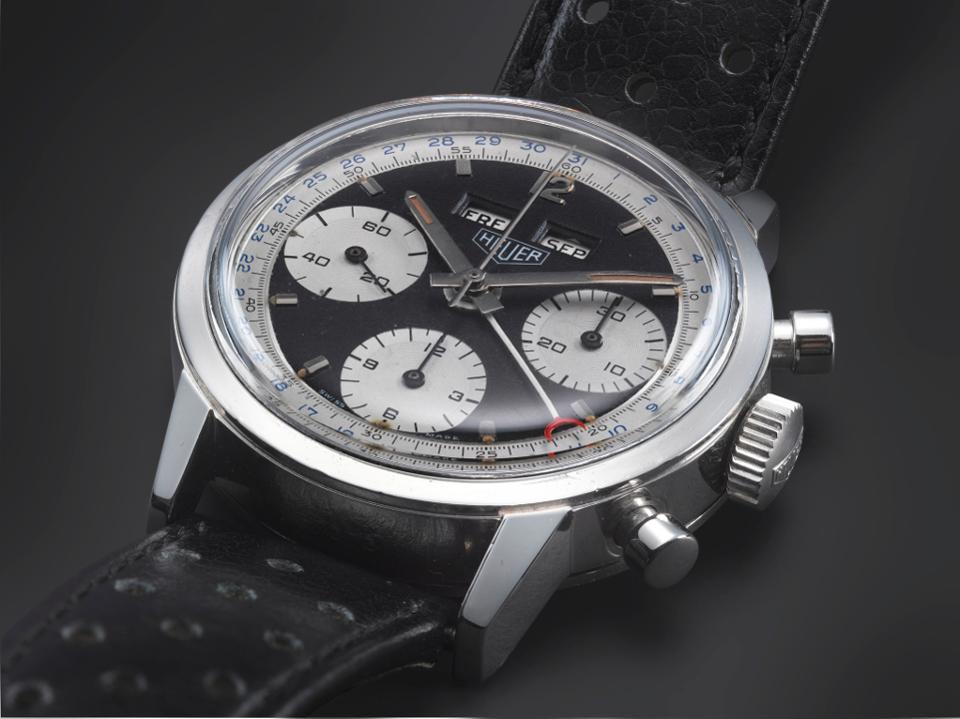 At any rate, the blend of high-performance and exhilarating speeds and turns that the cars and racers endured made an impact on Heuer, who opted to create a collection of watches with race-inspired details and incredibly legible dials. The collection was aptly named Carrera, the Spanish word for road, race, career and course.  The Carrera watches fast became famous with race car drivers who liked the look and performance, as well. Among them: Jo Siffert and the Scuderia Ferrari team. 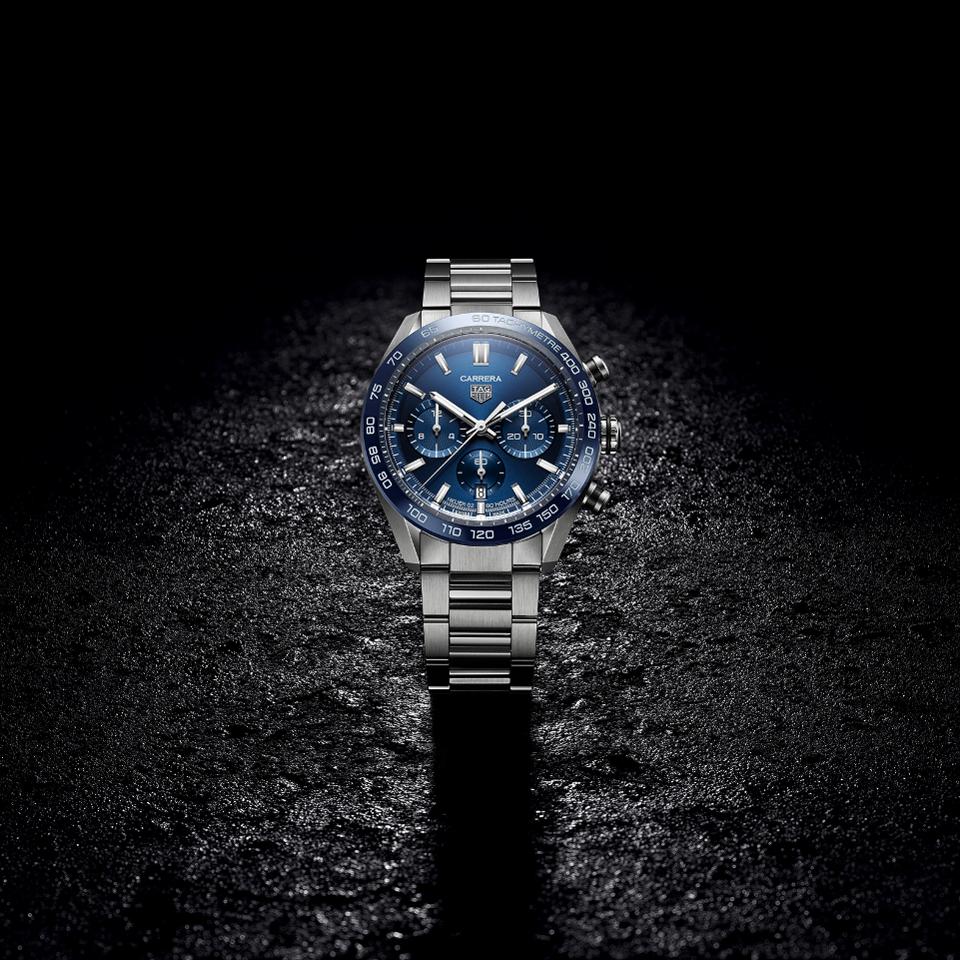 The new Carrera Sport Chronograph watches rolling out now honor that original racing watch but take elegance and performance to new heights. The watches are 44mm in diameter for a sporty appeal and feature alternating polished and matte finishes. The dials boast circular brushed finishes and are offered in deep racing blue with a color-coordinated ceramic tachymeter bezel,  a green recalling vintage cars with steel tachymeter bezels, and black with a black ceramic bezel. There is also a black and rose gold TAG Heuer Carrera that features a black ceramic bezel with rose-gold colored lacquer tachymeter scale. On this version, the chronograph push buttons and the crown are made in rose gold. 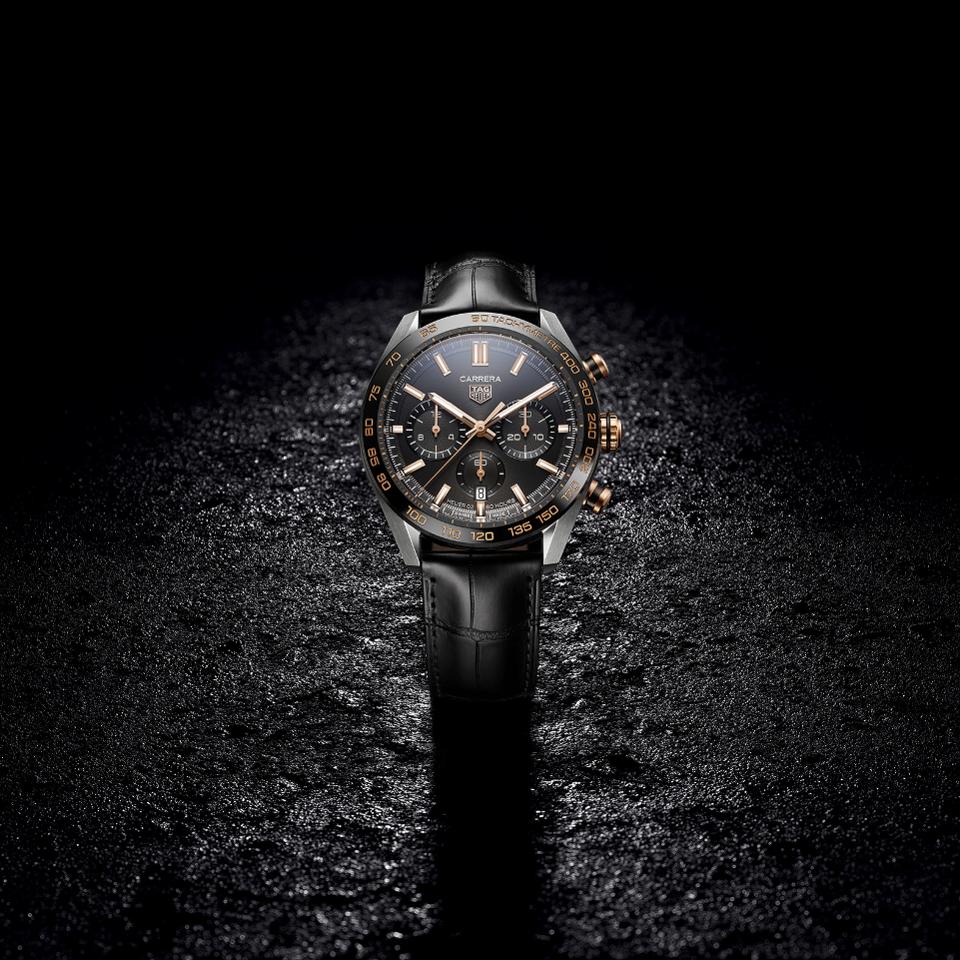 The TAG Heuer Carrera watches boast a central chronograph seconds hand and the subsidiary dials showcase the running seconds at 3:00, the minutes at 6:00 with date indication beneath it and the 12-hour counter at 9:00. The tachymeter bezel can be used for measuring speeds or distances.

The four newest watches in the collection house the brand’s manufacture-made Caliber Heuer 02 movement, which is visible via a transparent sapphire case back. The 168-part automatic movement is equipped with column wheel chronograph and vertical clutch. It offers an impressive 80 hours of power reserve. This means that if the wearer puts the watch down and picks it up again to wear within 80 hours (a little over 3 days), he or she does not have to reset the time, as the power has not expired.  Three of watches retail for $5,750, while the version with black dial, rose gold crown and pushers retails for $6,550. 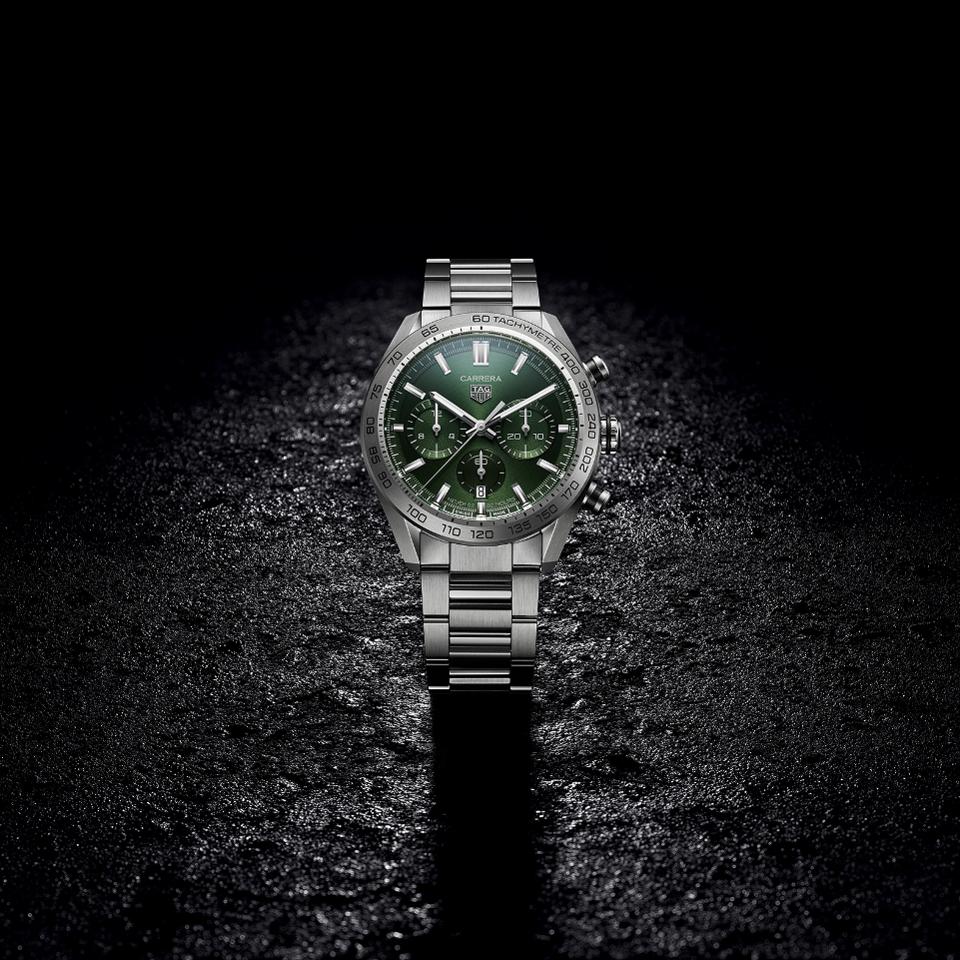 Earlier this year, the brand introduced two limited-edition anniversary pieces, the Tag Heuer Carrera 160 Years Silver and Montreal versions.  Word has it there will be a four more renditions down the road this fall, and another two special editions.

Introducing The Vacheron Constantin Year Of The Rabbit Watch
July 17, 2020

Introducing the Piaget Year Of The Rabbit Watch
July 17, 2020