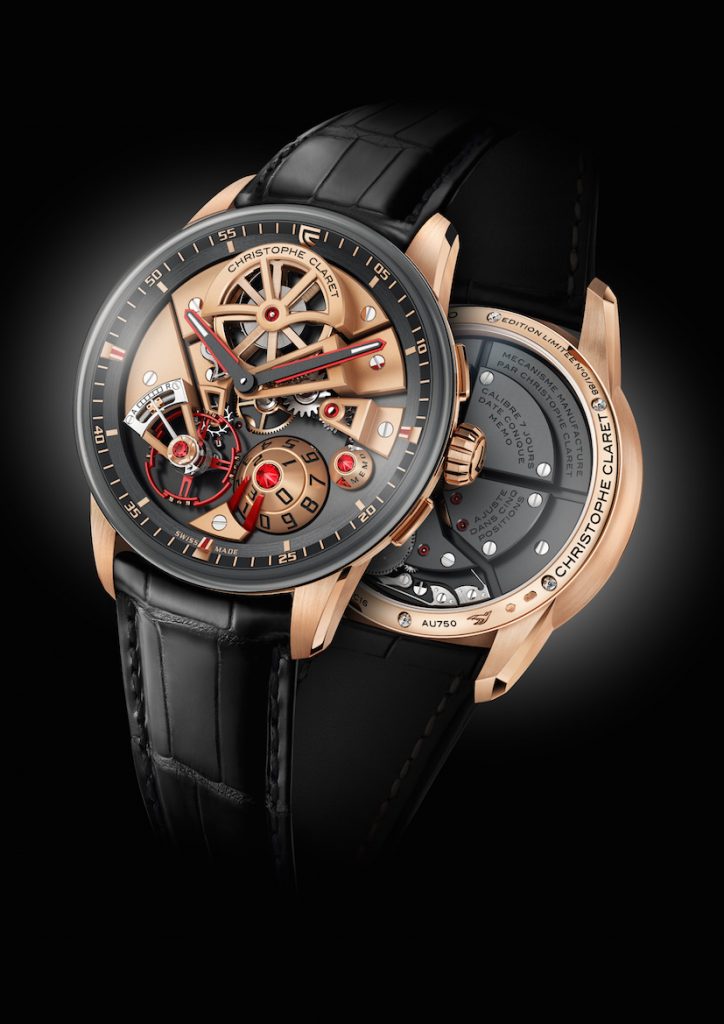 Just a couple of days ago, I had the opportunity to unveil the new Christophe Claret Maestro watch via my  Watch of the Week column on Departures. Now, we bring our readers an even closer look at this timepiece that will be officially shown to the world a tSalon International de la Haute Horlogerie (SIHH) next week.

For those in the know (when it comes to timepieces), master watchmaker and founder of the eponymous brand Christophe Claret is a true master at his craft.  Claret is not only renowned for the many complicated timepieces he has created (behind the scenes) for some of the finest brands in the world, but also for his chiming watches (that feature ultra-pure resonance) and his high-spirited game watches. In fact, over the years, he has delighted the world with  gambling watches on which one  can actually play roulette, dice and card games, and with his women’s “he loves me” watches wherein one can pick flower petals to the age-old rhyme. 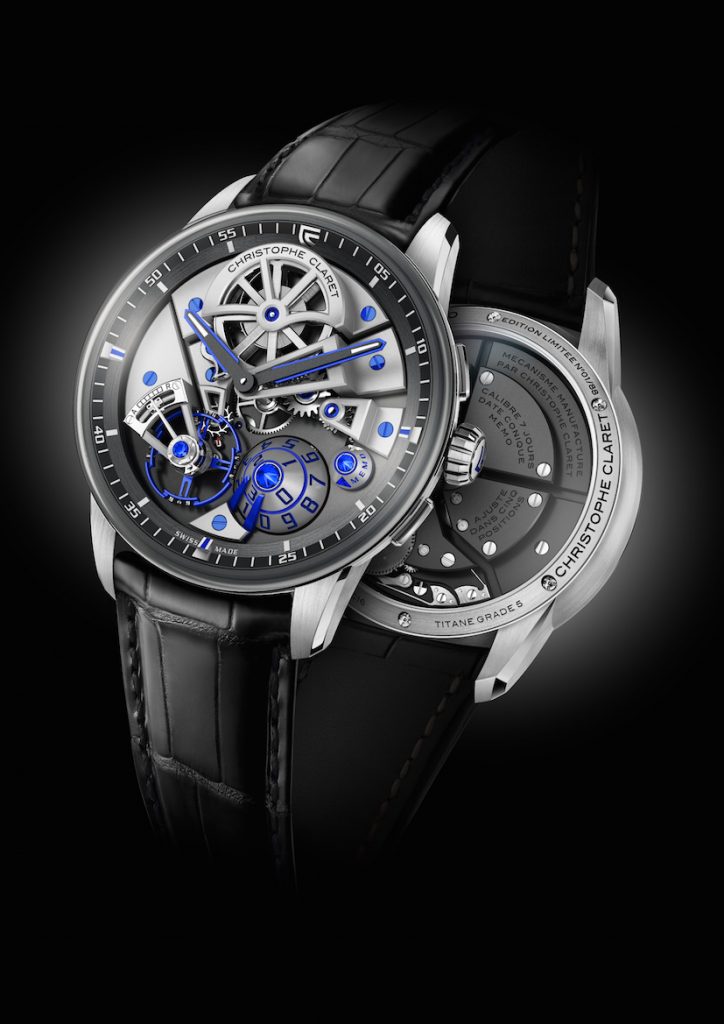 Christophe Claret Maestro in Grade 5 Titanium with blue accents and natural blue sapphires atop the cones on the dial.

Now, with SIHH literally around the corner, Claret unveils its newest mechanical watch that boasts a sporty three-dimensional appeal. It was actually during Baselworld 2016 that Claret had the idea for Maestro — a watch that is designed to help remember something the wearer must do. The watch features a device built into to called Memo, that Claret likens to tying a string around your finger to remember something. The Memo is a conical shaped dome at 4:00 on the dial that features a diamond set into it. The wearer (what the press of a button at 4:00)  sets the diamond to the time of the event or task he must remember to do. Once done, he can reset the Memo.

The cone-shaped Memo is actually the smallest dome on the watch dial, and it sits beside the conical shaped date display that is taller and uses two rows of numbers to indicate the “tens” of the date and the individual units of the date.  The watch also boasts seven days of power reserve thanks to two series-coupled barrels. A large glass dome over the entire timepiece enables viewing of a good portion of the meticulously finished 342-part movement , complete with his signature Charles X bridges.

According to Claret, the challenges inherent in the making of this watch involved time and money. Whereas most of his complicated movements take years to bring to fruition -he set a very stringent goal on this one. It was started in May of 2016 and needed to be complete and ready to roll out at this month’s SIHH — giving his team just eight months to complete the watch. Again, for those who know the work of Christophe Claret, you know that every tiny detail counts. He has been known to lament a single lever or system for years at a time before creating the perfect mechanical solution to a problem or to offer a new watchmaking concept. His mantra is always to join technique and aesthetics to promote precision, balance and useful complications. The newest hand-wound movement — although created in a short span of eight months — is no exception to his rule.

The other challenging aspect involved in the making of this watch was in the fact that Claret wanted an entry-level price for a complicated watch, and insisted that this watch stay at less than $80,000. The 42mm Christophe Claret Maestro is also the brand’s smallest-diameter watch to date. It  is offered in two versions: lightweight titanium accented with blue hues and  natural sapphires atop the domes; 180karat rose gold with red accents and a synthetic ruby atop the domes. Water resistant to 30 meters, the watch retails for $68,000 in  titanium and $76,000 in rose gold. Just 88 pieces of each version will be built. Tech Specs: 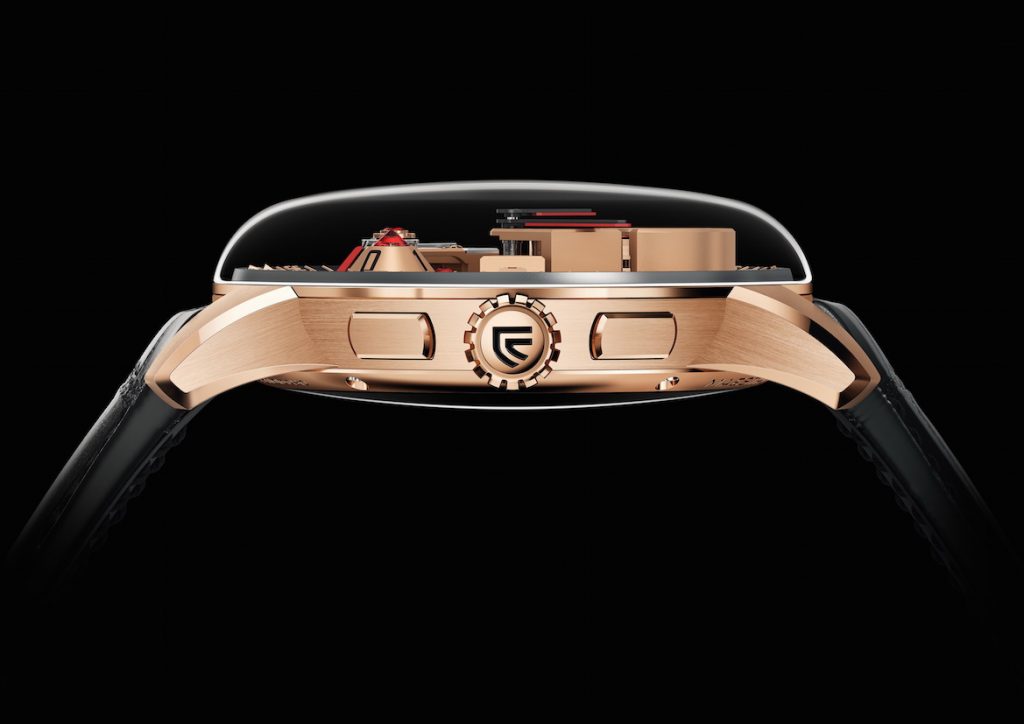 The Christophe Claret Maestro was eight months in the making and is the brand’s smallest diameter complicated watch at 42mm.

– Pyramid-shaped large date display at 5 o’clock, with tens on the upper disk and units on the lower disk

– MEMO function between 3 and 4 o’clock: cone shape adorned with a sapphire or ruby and a diamond serving to remind the wearer of a commitment 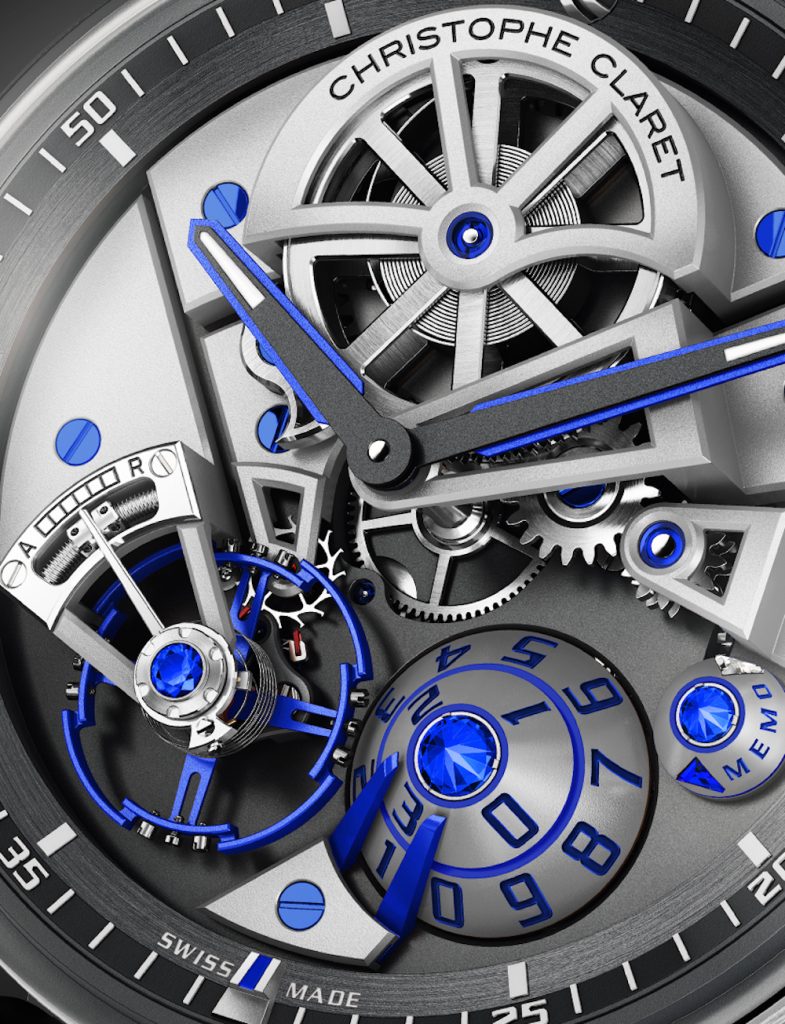