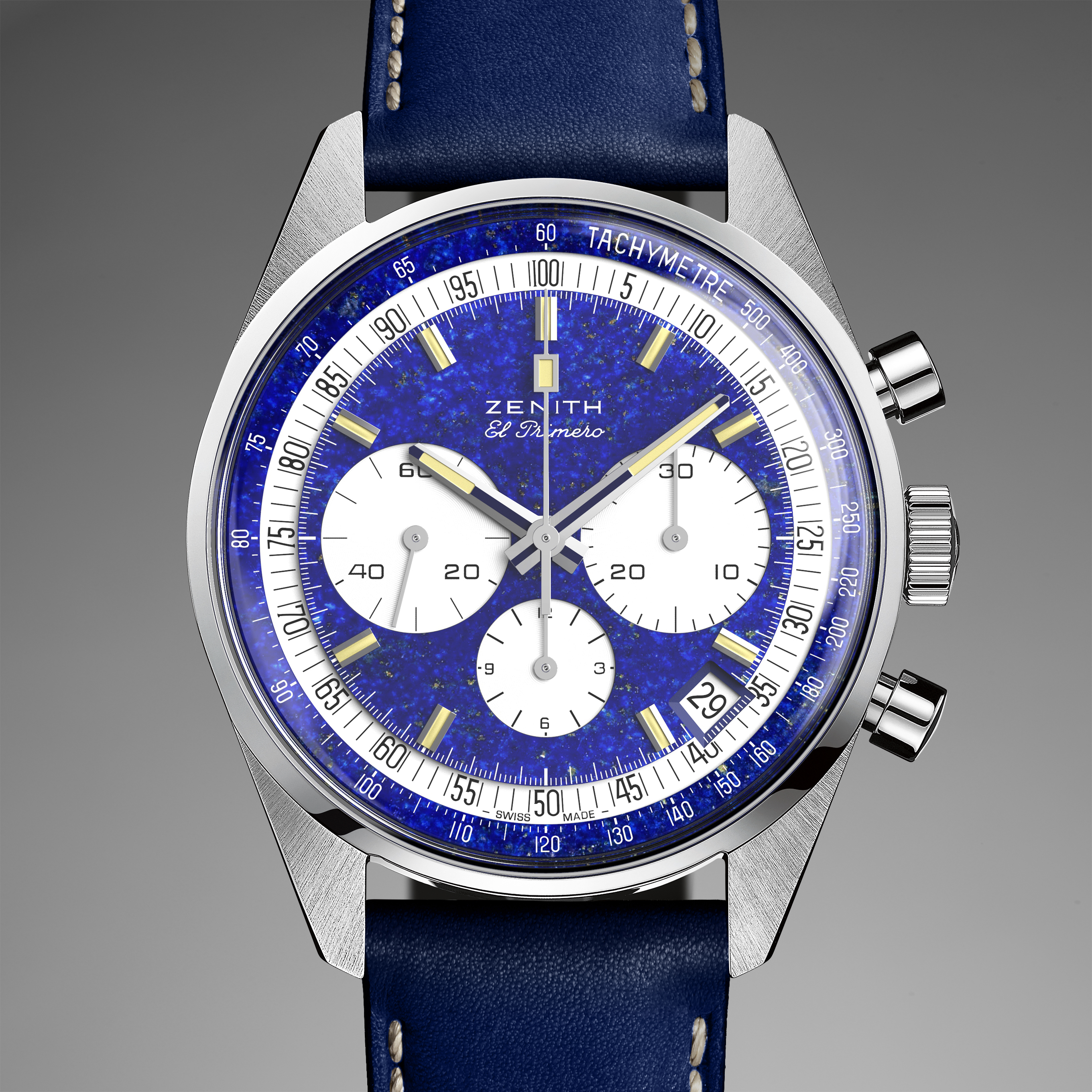 Zenith El Primero A386 platinum watch designed by Zenith and Phillips in Association with Bacs and Russo.

Just a few weeks ago, we broke the news here about Zenith’s collaboration with Phillips in Association with Bacs  & Russo for a one-of-a-kind platinum Zenith El Primero watch. The one-off watch is to celebrate the brand’s 50th anniversary of the legendary movement  — and it went up for auction this past weekend at the Geneva Watch Auction X. When the hammer finally hit, the watch had sold for a record high for the brand: $250,650. Proceeds went to benefit the Zoe4life charity that is part of the  Childhood Cancer International network.

“The first and only Zenith A386 reference to be made of platinum, this unique El Primero was designed by Phillips in Association with Bacs & Russo. The event crowns the Zenith El Primero 50th Anniversary celebrations throughout 2019, which included a World Tour across 5 continents – culminating in a gala show on the eve of the auction – to celebrate the first automatic integrated chronograph in watchmaking history introduced by Zenith in 1969.” 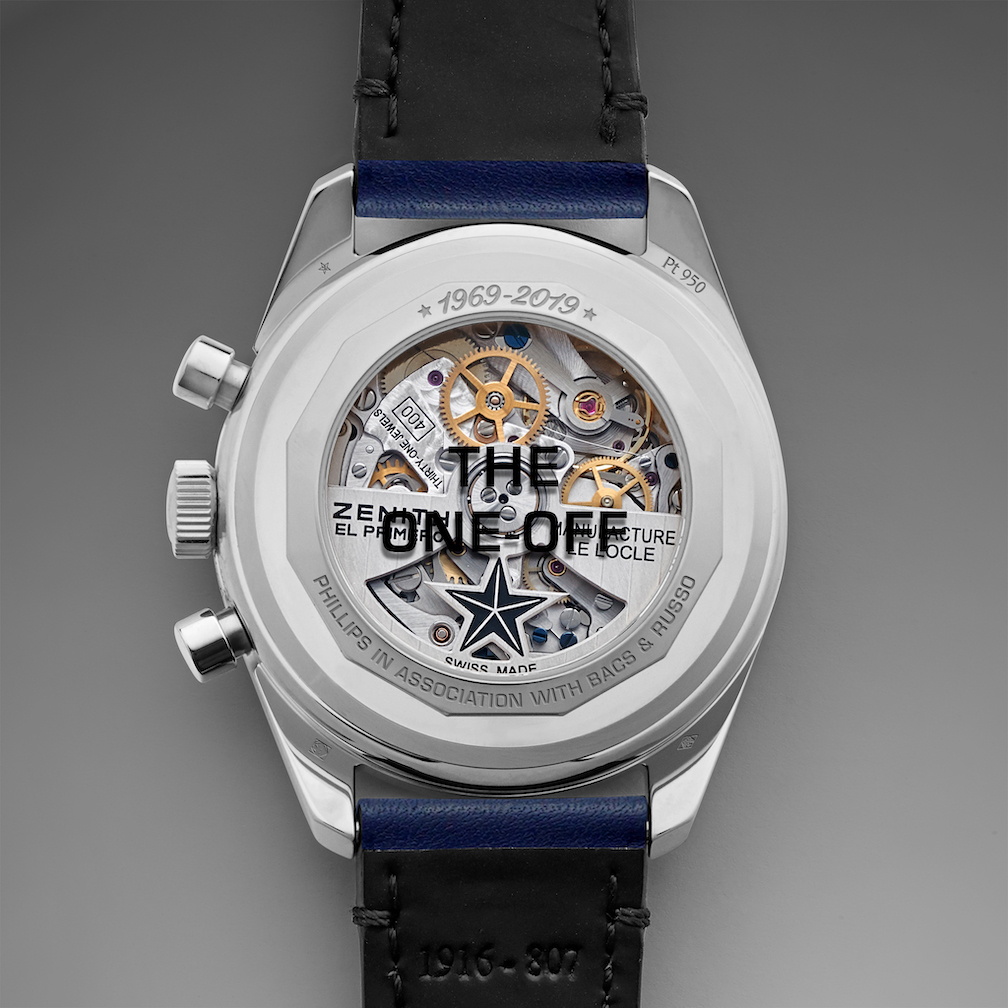 Case Back of the A386 Phillips Zenith El Primero in platinum.

Gala Unveiling Of The El Primero Designed By Phillips

At the gala, Zenith presented a film that depicted a host of important events in the year 1969, from the moon landing to the pop-culture Woodstock festival and more. Naturally, for the watch world, the culmination was the unveiling of the world’s first automatic integrated chronograph, El Primero. (Note: We will be bringing an in-depth story to the forefront about the El Primero in the coming weeks, so be sure to check back.) 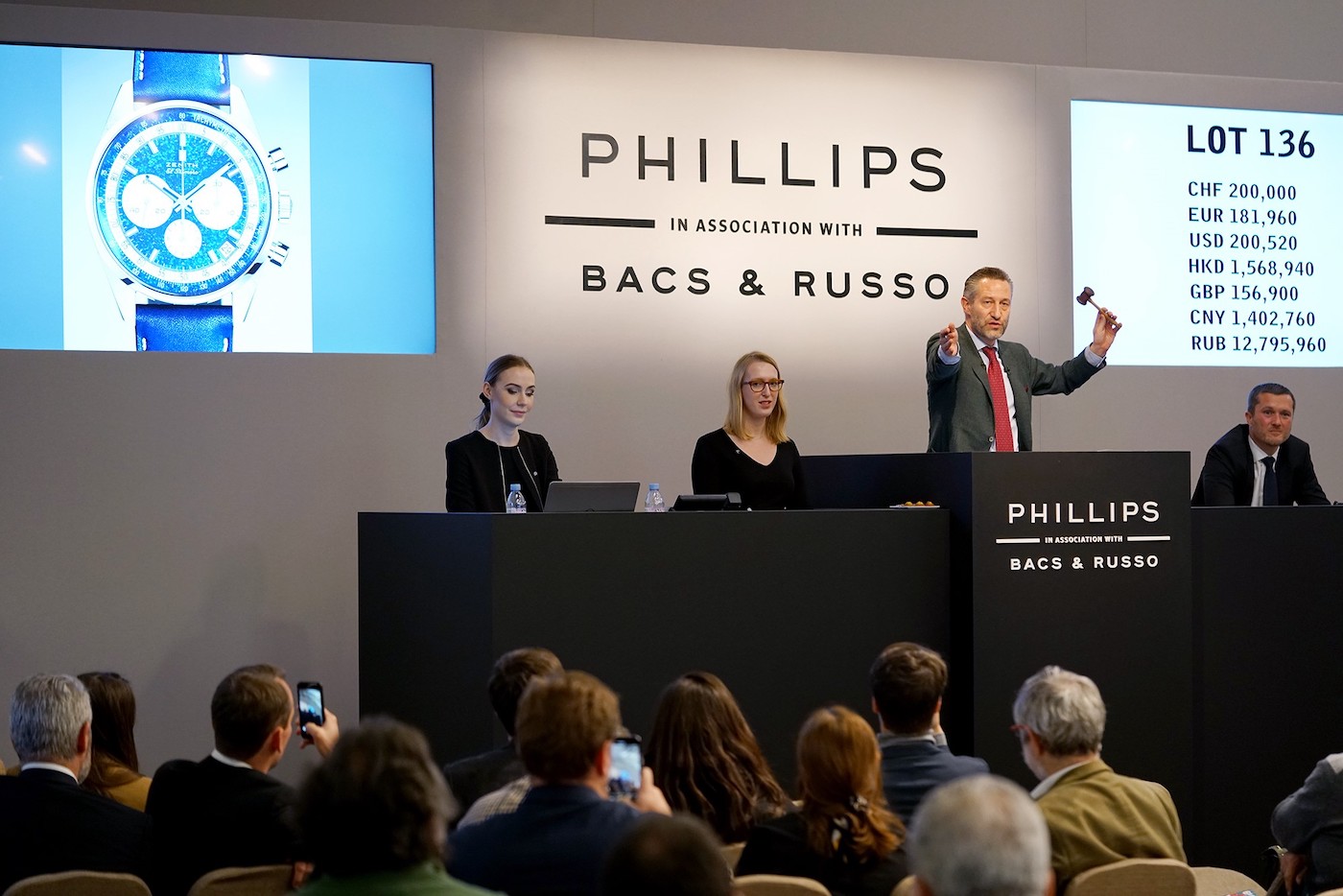 Aurel Bacs leads the bidding at the Geneva Watch Auction X, where the one-of-a-kind Zenith El Primero designed by Phillips sold for a quarter of a million dollars, with all proceeds going to charity.

“All of us at Zenith are so proud to be part of the still unfolding legend that began 50 years ago with the first (El Primero!) automatic integrated chronograph in watchmaking history,” says Tornare.

Two other versions of the El Primero were designed by Phillips, check back tomorrow for that story.