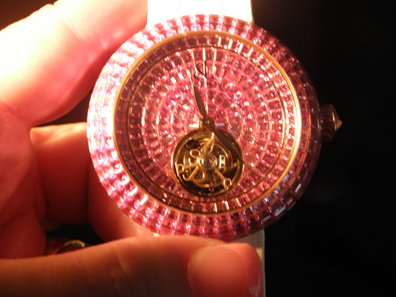 Today’s finest watch brands are bringing the mechanical magic of timepieces to ultra-feminine levels, with a move toward women’s watches with tourbillon escapements. One of the most complicated and coveted horological feats, the tourbillon (“whirlwind” in French) is a highly precise mechanism that eliminates errors in timekeeping caused by the force of gravity when a watch is in certain positions. 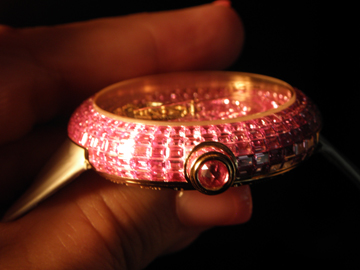 A total of 36.75 carats of baguette-cut sapphires adorn the watch.

The tourbillon escapement is immediately recognizable thanks to the entrancing dance of the constantly revolving mechanism, which further underscores the beauty of the piece. Incredibly difficult to build, the tourbillon has become the object of watchmaking competition, as brands strive to invent ever more advanced tourbillon timepieces. The most recent direction: women’s tourbillons. 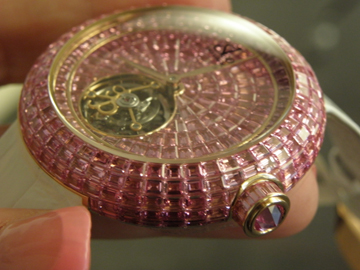 The entire case and dial are adorned with a total of 400 pink sapphires. 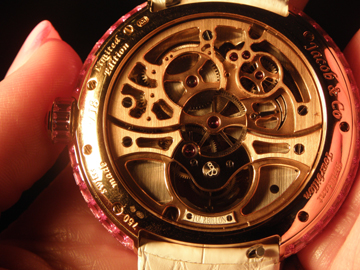 This Jacob & Co. Pink Sapphire Brilliant Tourbillon, crafted in 18-karat gold, features a one-minute flying tourbillon that is mesmerizing in and of itself. Enhancing it further, Jacob & Co. has meticulously set the watch with 400 baguette-cut pink sapphires weighing 36.75 carats total. The cost – about as much as a nice house in New Jersey — $810,000.