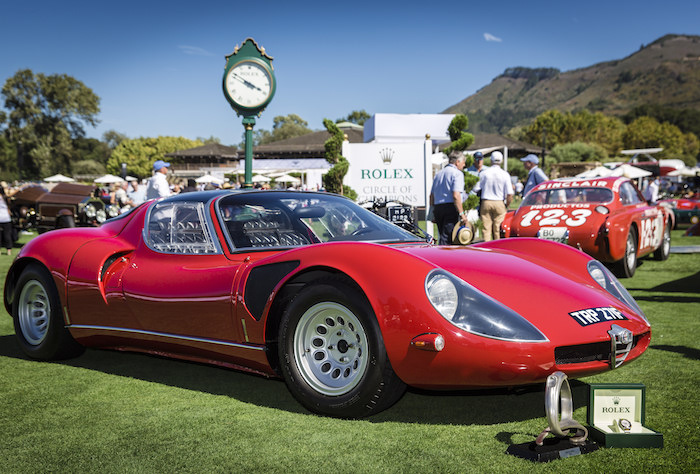 Over the past four days we’ve brought you some in-depth coverage of the Annual  Monterey Classic Car Week. After such a monumental period in car racing, with Rolex involved in four events, we want to take a look at the brand’s timepieces that draw inspiration from the automotive world.

Presenting a portion of this week’s events fully represents Rolex’s motor-driven passion and involvement. The brand has had its hand in motorsports for decades with events such as endurance racing, Formula 1 and 24 Hours of Le Mans. Ever since 1910, when founder Hans Wilsdorf created a wristwatch that was reliable, precise, and durable enough to withstand even the most active lifestyles, Rolex has been evolving much to the same degree as motor cars. Such evolution in materials and manufacturing has provided the springboard towards an extensive dedication to achieving perfection. 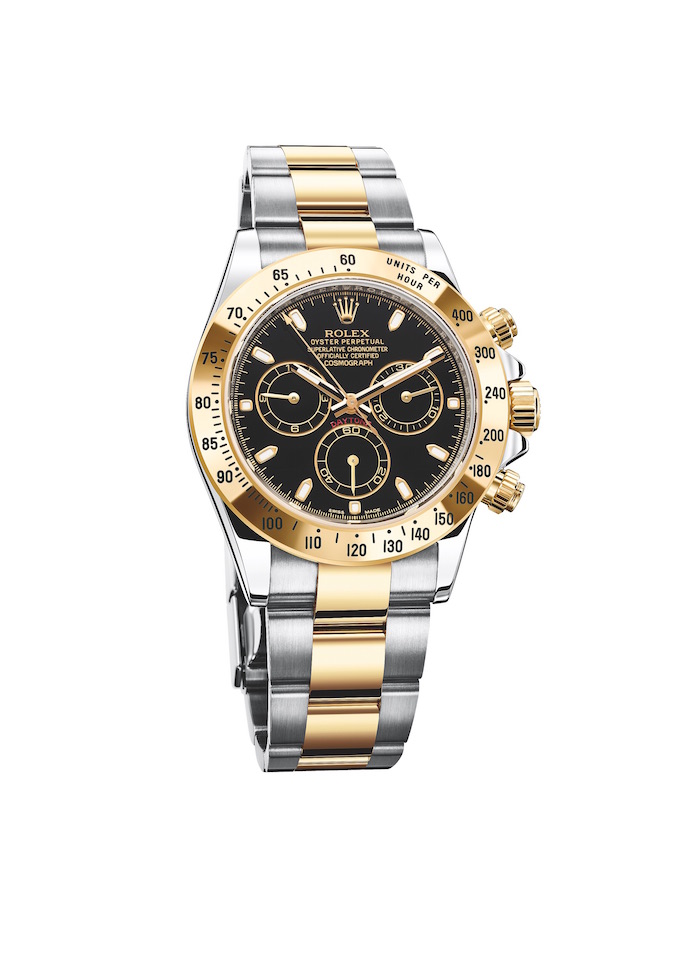 Perhaps the earliest account of Rolex’s celebrated partnership within the automobile sector was in 1935, when Sir Malcolm Campbell set a world land-speed record while wearing a Rolex Oyster. By 1959 however, the brand entered into a massive partnership with the United States’ Daytona International Speedway. Particularly, the Cosmograph Daytona is the iconic wristwatch for racecar drivers.  Former World Championship Formula 1 Grand Prix driver Jochen Mass went so far to name his favorite Rolex to be his very own Cosmograph Daytona.

In pursuing perfection, Rolex’s racing driver’s watch, the Oyster Perpetual Cosmograph Daytona, features an in-house self-winding mechanical chronograph movement, calibre 4230,  with a 72-hour power reserve. For precision assurance there is a COSC-certified chronometer which houses a reduced number of components, enhancing the product’s reliability. At the heart of the watch, the oscillator contains a blue Parachrom hairspring that is insensitive to extreme temperatures and is up to 10 times more shock resistant than its contemporaries. 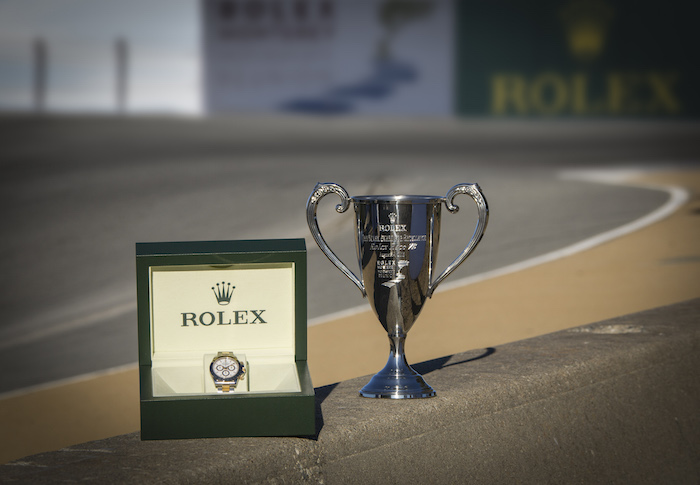 Rolex Timepiece and Trophy awarded to the winner of each class

Created in 1963, the Cosmograph Daytona was made for the road. Not only does its tachymeter around the bezel have the ability to measure speeds up to 400 units per hour, but also its functions are ergonomically legible beyond compare. The 40mm steel case lives up to its robust beginnings by being water resistant up to 100 meters (330 ft). Covered with a highly scratchproof sapphire crystal, this piece is more than capable of withstanding its fair share of shocks, scrapes, and fast turns. 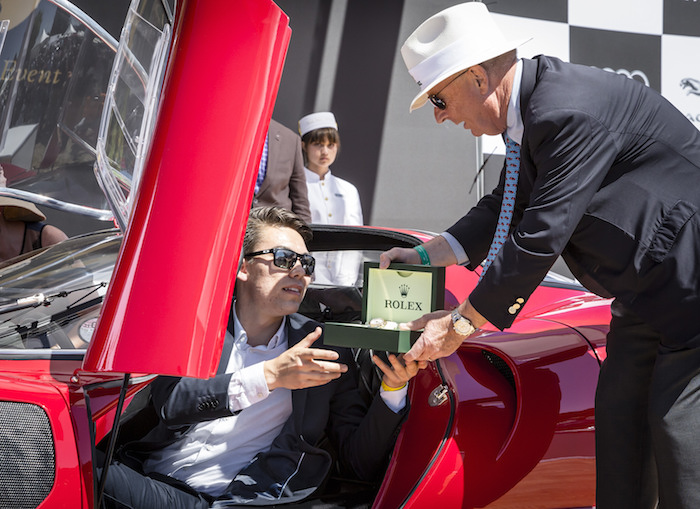 During this past weekend’s “The Quail, A Motorsports Gathering” event displaying the finest in automotive design and engineering, Lance Butler, owner of the 1968 Alfa Romeo 33 Stradale, not only won the Best of Show for The Quail, but also won a Cosmograph Daytona of his very own — a fitting gift for a person who prizes the same technical perfection and pursuit of excellence as does the infamous Rolex. 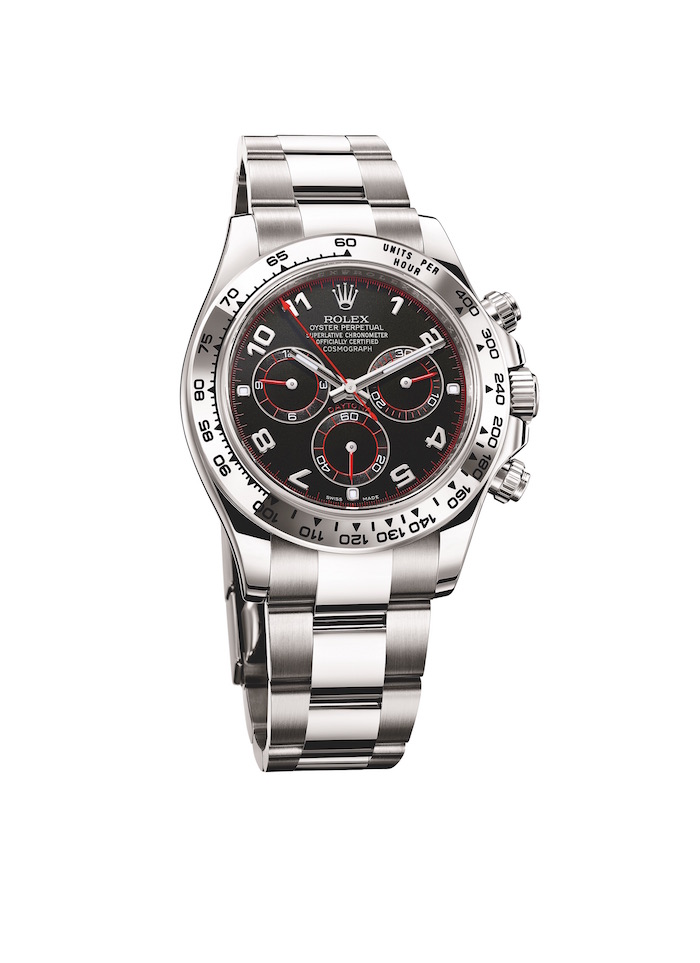