Why The Newly Introduced Cartier Pasha Collection Will Steal Hearts 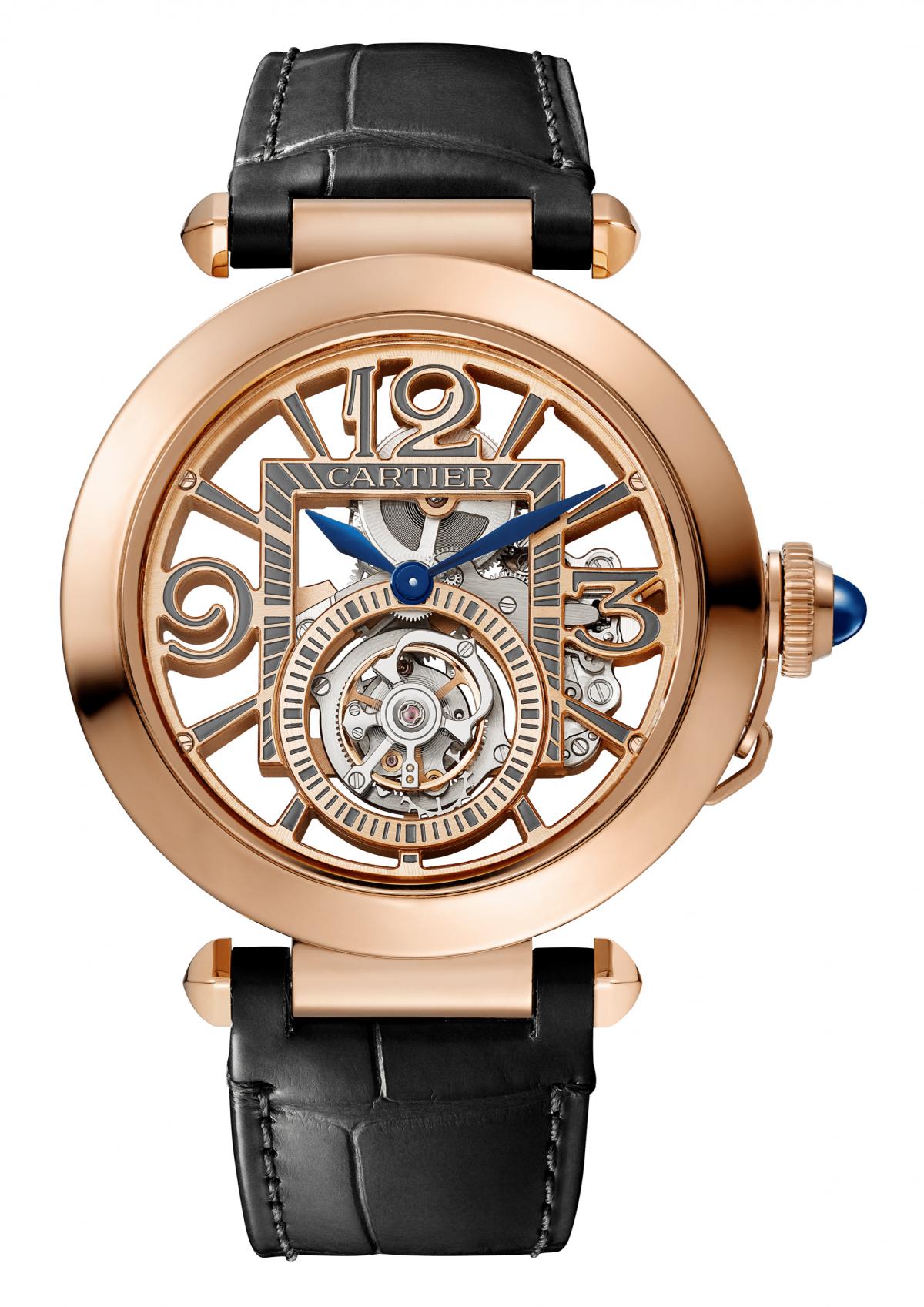 It was a cult watch back in the mid 1980s. In fact, when it was first introduced in 1985, the world went wild for the Cartier Pasha. I remember because I had just joined the watch world — as the first female watch journalist in America — and I was blown away by it. It was large, but not too large. It played with shapes — putting a square center seconds track on the round dial. It was decadent yet delightful. When Cartier adorned the Pasha with a grid dial cover, watch lovers talked endlessly about how it reminded them of the watches with covers unveiled during the early part of the 20th century — to protect watches during wartime. In short, it seemed like there was nothing Cartier could do that would stop the public from loving the Pasha. Now, 35 years after its famed introduction, the Pasha is still beloved — but it is also new and modernized. 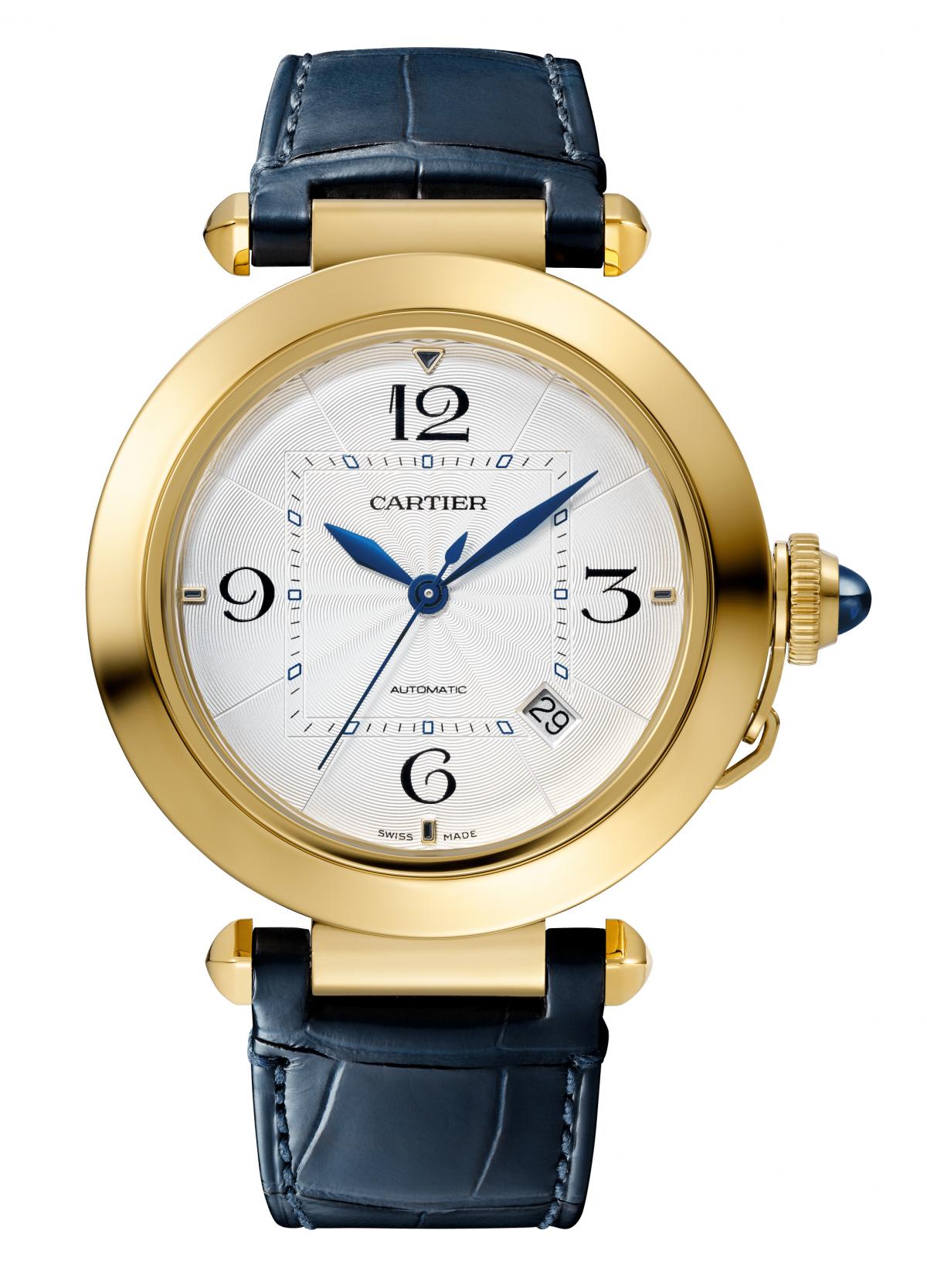 The new Cartier Pasha watches are crafted in steel, rose gold and yellow gold, as in this version.

For the recreation and unveiling of the new Pasha de Cartier watches, the Swiss brand once again brings the graphic square within a circle concept to life. The distinctive dial still features the four bold Arabic numerals on the dial, but they are more stylized and updated. The dials also feature the date display set on an angle between 4:00 and 5:00 via a square aperture for even more geometric allure. 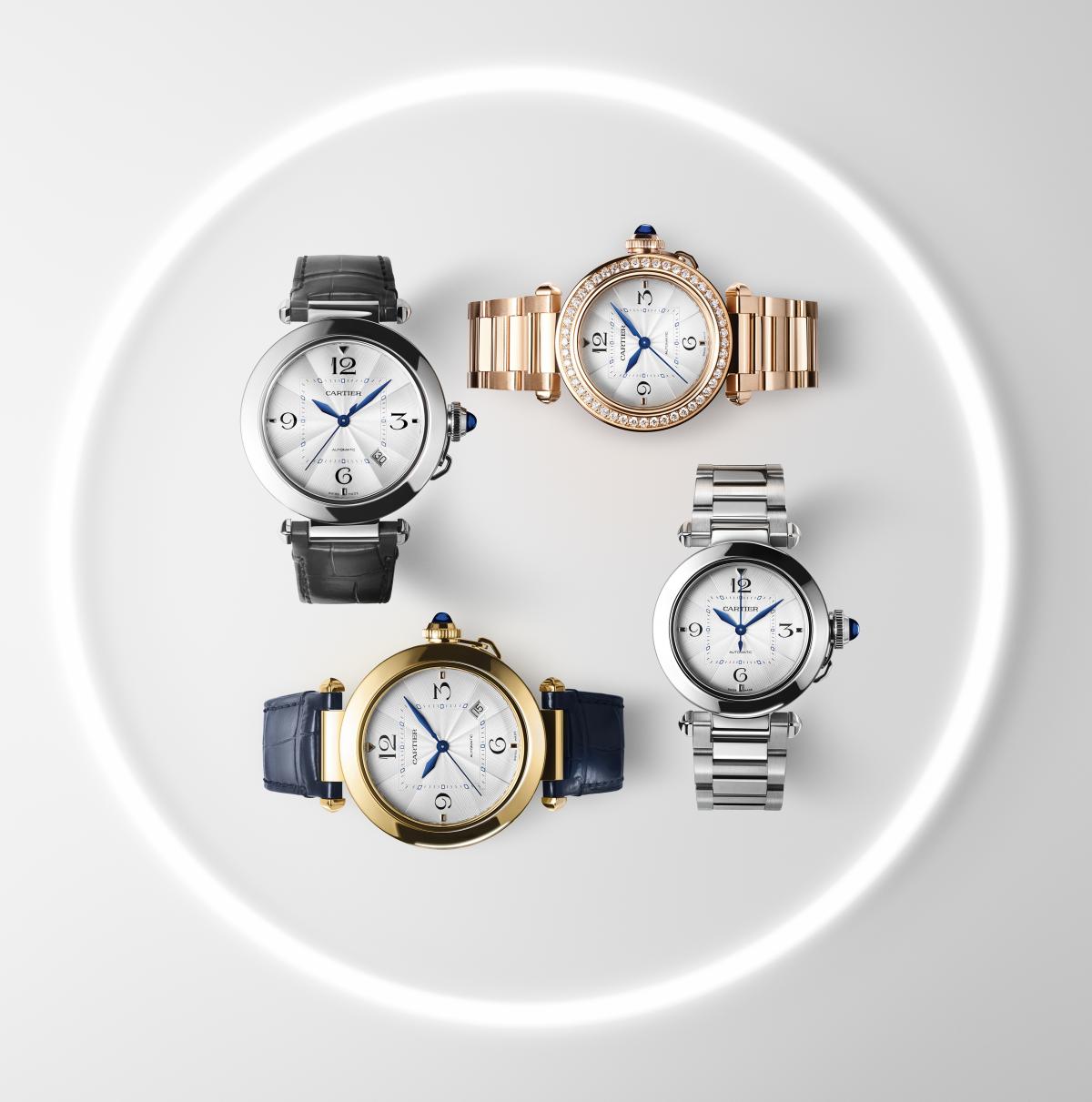 There are multiple versions of the Cartier Pasha, with interchangeable straps.

The new versions — offered in stainless steel, 18-karat yellow gold or 18-karat pink gold — are created in 35mm and 41mm sizes. Versions — with and without diamonds — run the gamut from models with highly guilloche’d dials, to skeletonized versions and even a totally diamond-adorned model.  Each watch features a cabochon blue spinel or sapphire — recalling the original piece. However, the new versions are offered with a contemporary bracelet, or with interchangeable straps. Thanks to a hidden plate on the case side under the crown cover, the watch can also now be engraved with the owner’s initials. 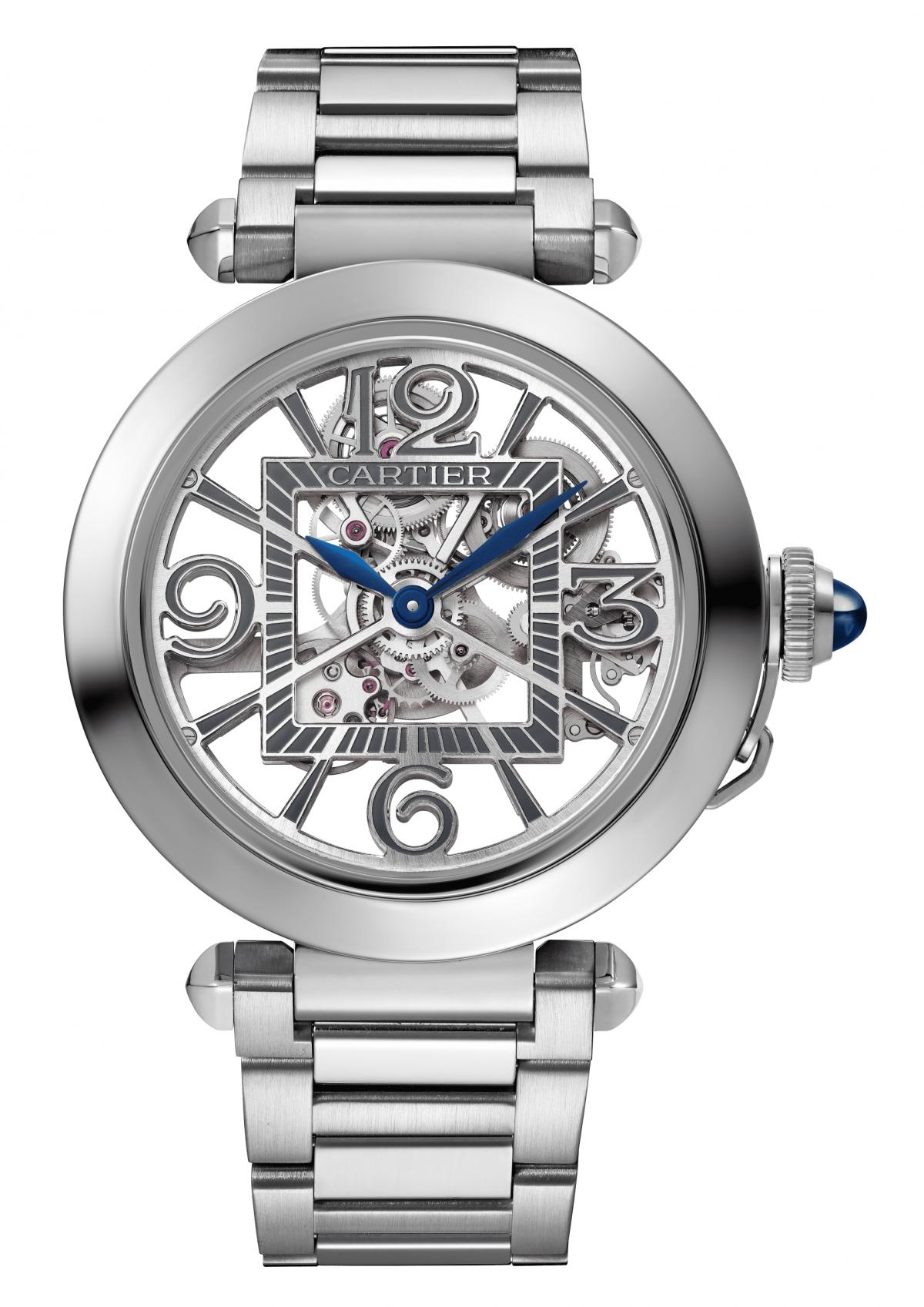 Sapphire casebacks allow for viewing of the movements within. The movements used vary depending on the watch model, but the ones that are powered by the Caliber 1847 feature non-magnetic nickel phosphorus components and an inner paramagnetic alloy shield to ensure anti-magnetism.

For me, the open-worked Pasha de Cartier manual-wind tourbillon watches are the most alluring of the new collection. Each of these versions measures 41mm in diameter and house a tourbillon escapement at 6:00 on the dial. They are powered by the  brand’s manual winding  9466MC tourbillon skeleton caliber with 50 hours of power reserve. The juxtaposition of the round tourbillon escapement beneath the square inner track and then against the larger round dial just adds beautiful harmony.

But truth be told, any one of the new Pasha de Cartier watches would make me happy. There is something nice about seeing a recreation of a legend. It’s even nicer when that recreation is on your  wrist. We are sure that all of the new renditions will steal hearts — especially the stainless steel versions. The 35mm steel model sells for $5,700 — not a bad price at all for this Cartier watch. The basic models range to $16,600 in yellow gold,  while the skeletonized watch will sell for $25,300. No prices yet on the skeleton tourbillon or the diamond versions. 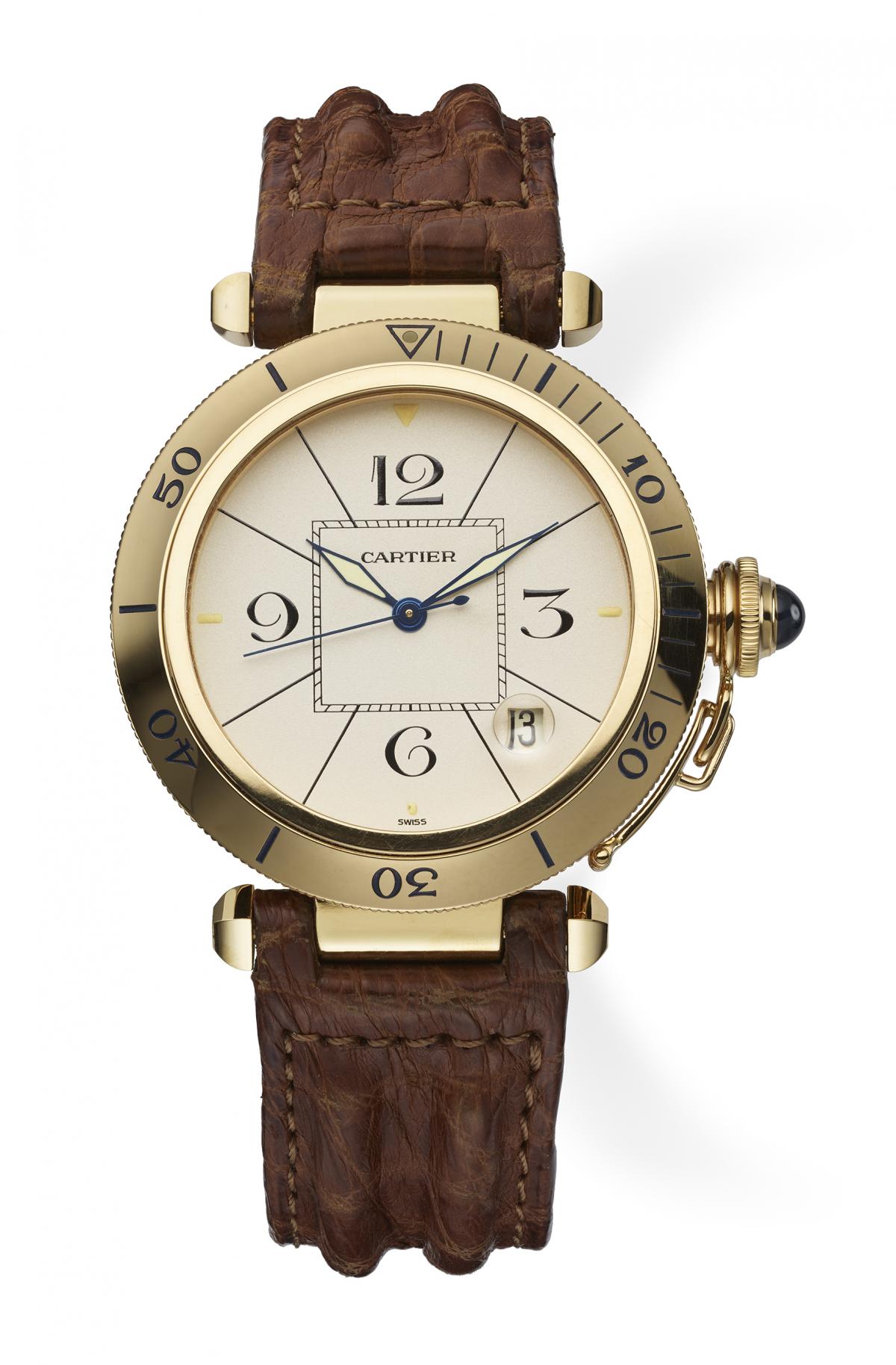 Introducing The Vacheron Constantin Year Of The Rabbit Watch
May 5, 2020

Introducing the Piaget Year Of The Rabbit Watch
May 5, 2020