Why The New Omega Speedmaster Silver Snoopy Watch Is Hot 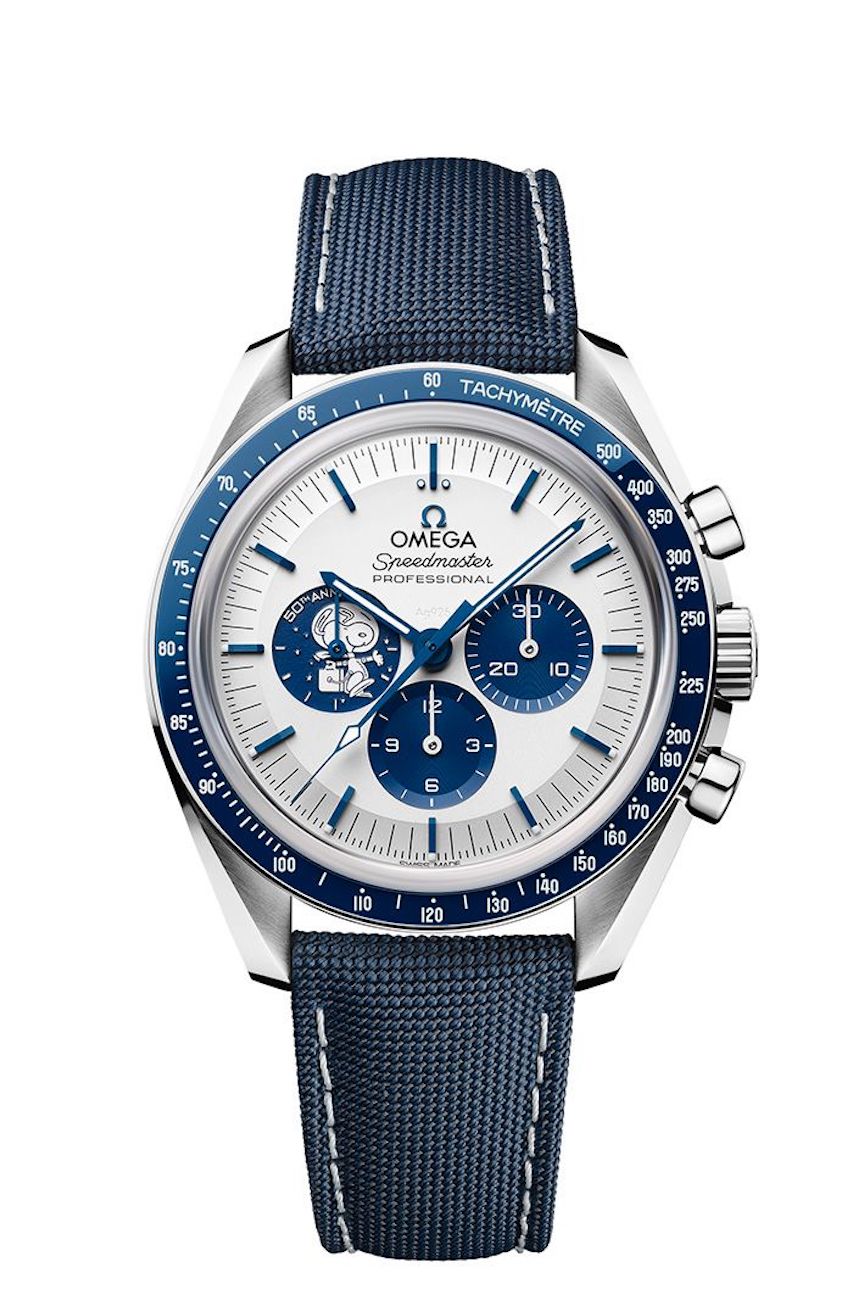 Why The Omega Speedmaster Silver Snoopy Watch Is Hot

Recently, we covered this watch in our column in Forbes, but in the short week since we wrote that article, the watch has been taking the collector world by storm. Everyone expected that, of course, because anything Omega and moon related is already hot. However, this watch is even more of a sensation because it embraces the comic book Snoopy — brave, adventurous and good natured — in multiple places on the watch. Who doesn’t love Snoopy? In fact, because Omega made this a fun and witty tribute to a serious moment in time, the watch is all the more attractive to followers. It also has another element going for it: it is an anniversary tribute. 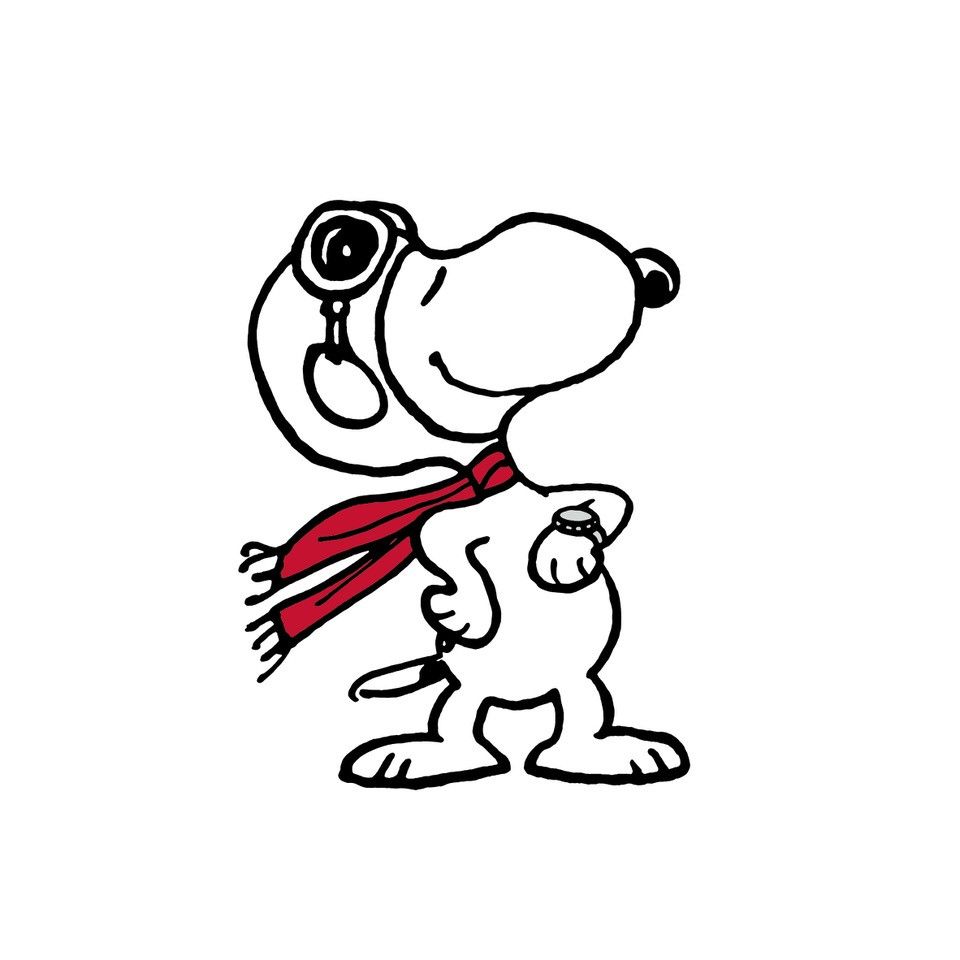 The Omega Speedmaster Silver Snoopy Award 50th Anniversary Watch prominently portrays the beloved Snoopy on the dial and case back.

Schulz had begun creating the Snoopy comic strip in the 1960’s. He regularly showcased the dog – which often was depicted with a red scarf — on the moon. After all, Snoopy liked a good adventure. When NASA was looking to find a symbol for its safety program in 1968, Snoopy seemed like a good candidate. He was lovable, light-hearted and smart. The NASA astronauts soon created the prestigious Silver Snoopy Award that was designed by Schulz and showcases the beagle in a spacesuit. It design was made into a patch and a silver pin in the likeness of Snoopy in space helmet became the award – given to those who have contributed to “the success of human space flight missions.” 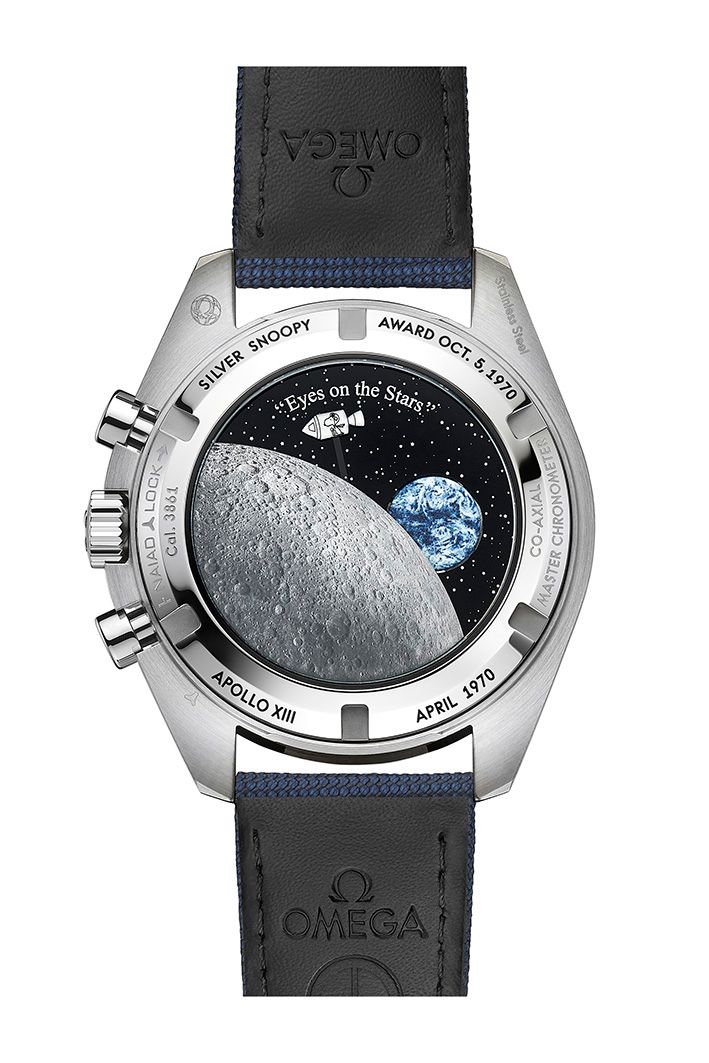 The case back of the Omega Speedmaster Silver Snoopy Award 50th Anniversary Watch is almost as fun and alluring as the dial.

Omega had been part of the NASA mission since 1965 when its Speedmaster had been declared “flight qualified” for all manned NASA space expeditions. In fact, the Speedmaster became the first watch on the moon in 1969. However, it was in 1970 that Omega truly proved itself. Just two days into that Apollo 13 mission, an oxygen tank exploded and the astronauts were forced into the Lunar Module – a small craft not intended for long life support. As they powered down their instruments, the astronauts knew they had to burn exactly 14 seconds of fuel in order to properly re-enter Earth’s atmosphere. Commander James Lovell and the crew depended on their Omega Speedmaster chronographs. On their return, the crew honored Omega for its critical role. 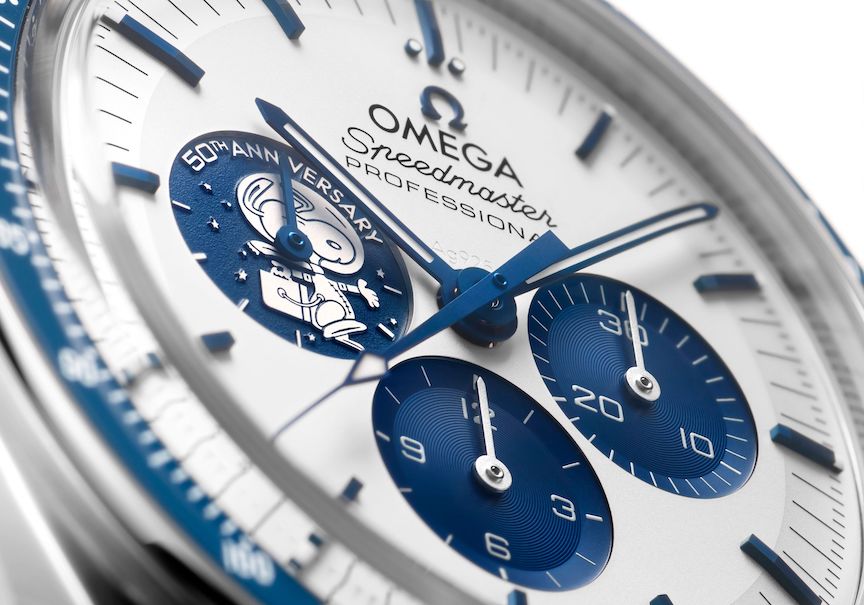 A closer look at the subsidiary dial of the Omega Speedmaster Silver Snoopy Award 50th Anniversary Watch with Snoopy in it, just seems to be a feel-good moment.

Since then, Omega has regularly created Speedmaster watches of distinction that recall the NASA and Apollo journeys, including the beloved Dark Side of the Moon watch. The newest Speedmaster Silver Snoopy Award 50th Anniversary Watch prominently showcases Snoopy on the dial and the case back. The 42mm stainless steel watch is crafted with an Ag925 silver dial and blue chronograph subdials and matching blue ceramic tachymeter bezel ring. Inspired by the first watch worn on the moon, the new timepiece features an image of Snoopy in space suit inside the subsidiary dial at 9:00, The image is the same one used for the Silver Snoopy Award pin.

On the case back, there is a cartoon of Snoopy in a Command and Service (CSM) module as he heads to the moon. Even the lining of the blue nylon strap recalls the mission by featuring a trajectory of the Apollo 13 ship. The moon’s surface is decorated on the sapphire crystal with a metallization process. In the background a blue disk representing Earth rotates once a minute. Above Snoopy’s capsule are the words “Eyes on the Stars.” Surrounding the case back crystal is a NAIAD lock that is engraved with the date that Omega received the Silver Snoopy award.

The watch is powered by Omega’s Co-Axial Master Chronometer Caliber 3861 movement that is anti-magnetic and sets mew standards. It carries the Master Chronometer certification from the Swiss Federal Institute of Metrology (METAS). It is backed by a five-year warranty and retails for $9,600. 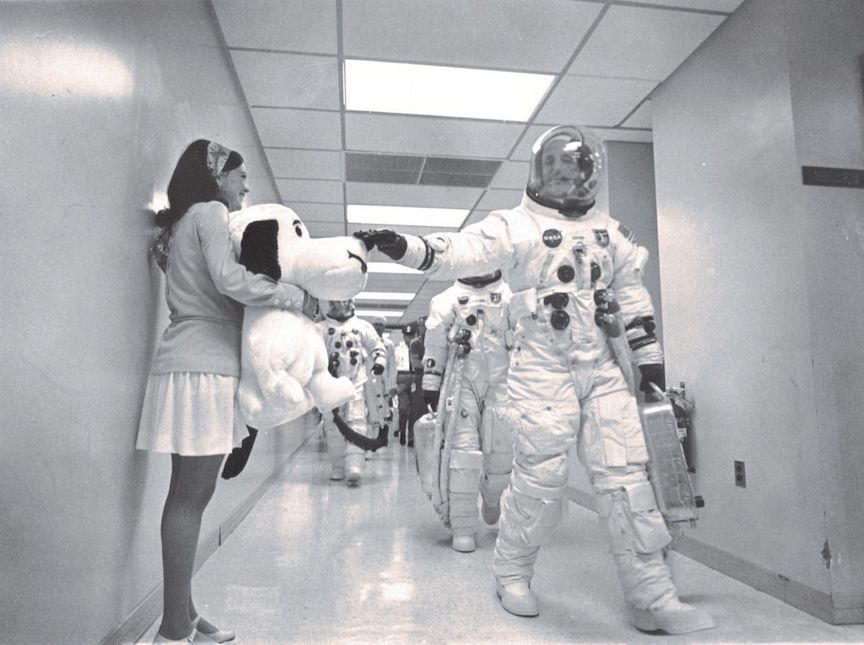 Snoopy fast became the mascot for the missions. Stafford gives the plush toy dog a pat on the nose.