Why The New Jaeger-LeCoultre Polaris Mariner Dive Watches Are Hot 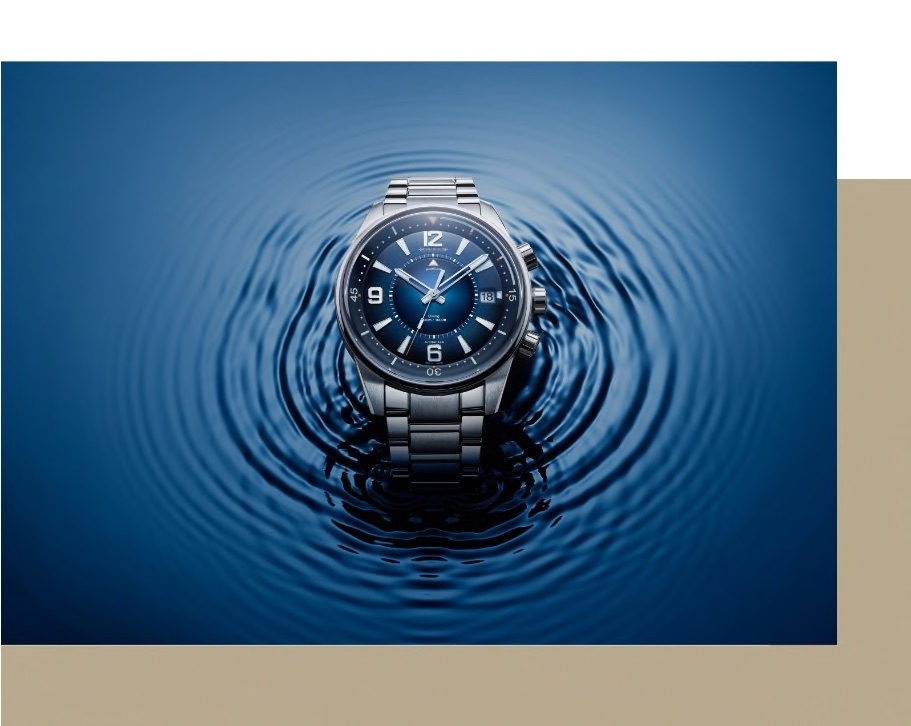 There are two new versions of the Jaeger-LeCoultre Polaris Mariner dive watches.

Just last week, Swiss watch brand Jaeger-LeCoultre unveiled its all-new Polaris Mariner Dive watches — and they are taking the watch collecting world by storm. It is not difficult to figure out why. The Polaris, especially the Memovox, is one of the most beloved collections from the and has been stealing hearts for more than six decades. Now, Jaeger-LeCoultre pays homage to the powerful watches of that era with the new Polaris Mariner high-performance watches.

It was in 1959, the brand unveiled its first self-winding Memovox movement that offered a warning to divers (who had virtually no real diving tools back then) to return to the surface. Almost a decade later, in 1968, the Memovox Polaris made its debut. That watch had an internal rotating bezel, as well as an alarm. Not only were divers in awe, but so many others fell in love with the alarm function and the Memovox Polaris became a true collector’s watch. The new Polaris Mariner high-performance watches pay tribute to the originals. 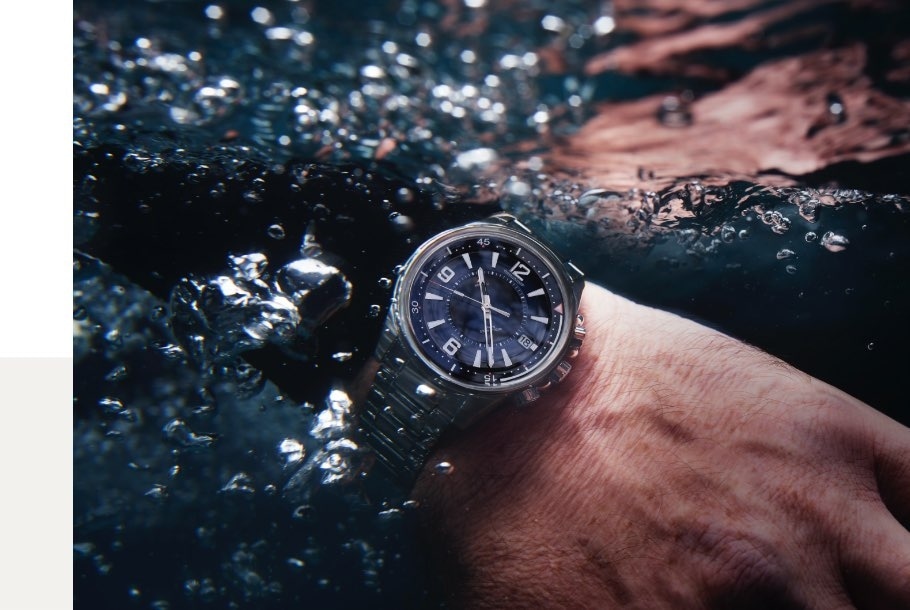 Both 42mm diving watches are fully compliant with the ISO 6425 specifications. Each is water resistant to 300 meters and the crown that sets the notched inner bezel for diving is screwed down to avoid any movement. Additionally, the master watchmakers at Jaeger-LeCoultre equip the watch with a security band that displays orange to warn divers that the crown is not fully screwed down. 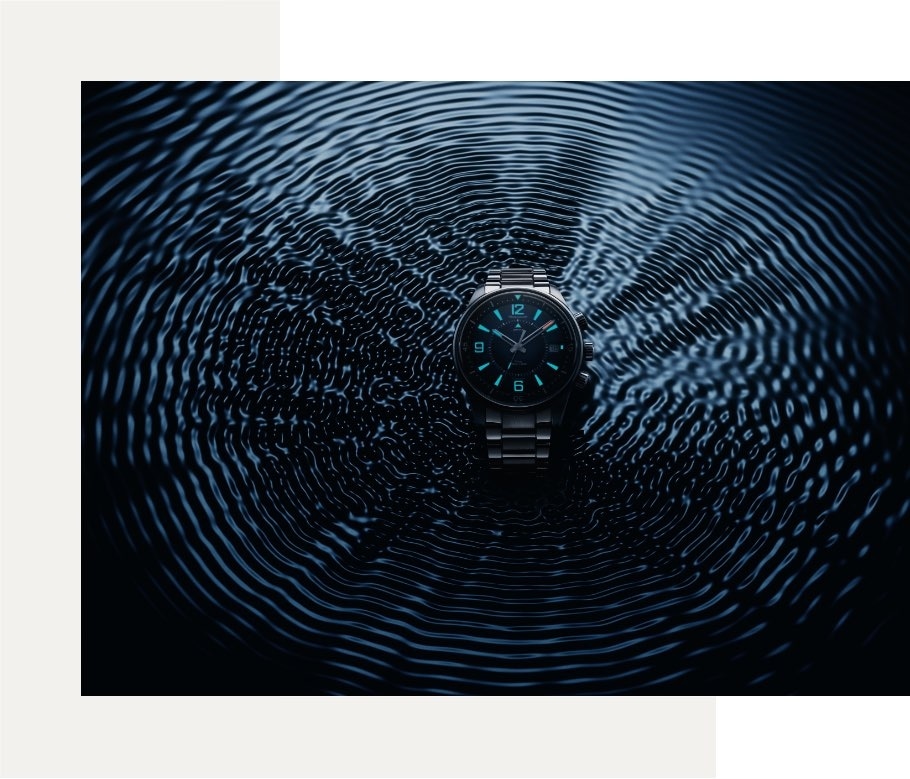 The watches have a bright lime to them for easy underwater reading.

The new Polaris Mariner watches feature a rich blue gradient dial with concentric circles that range from a lighter blue in the center to a midnight blue on the edges – offering great contrast with the bold Arabic numerals and trapezoid indexes. Those numerals and indexes, as well as the hands, are filled with Super-LumiNova for superb reading under water. The seconds hand is tipped in orange for bright-light readability. The watch is finished with a polished- and matte-finished triple row link bracelet in stainless steel to match the steel case 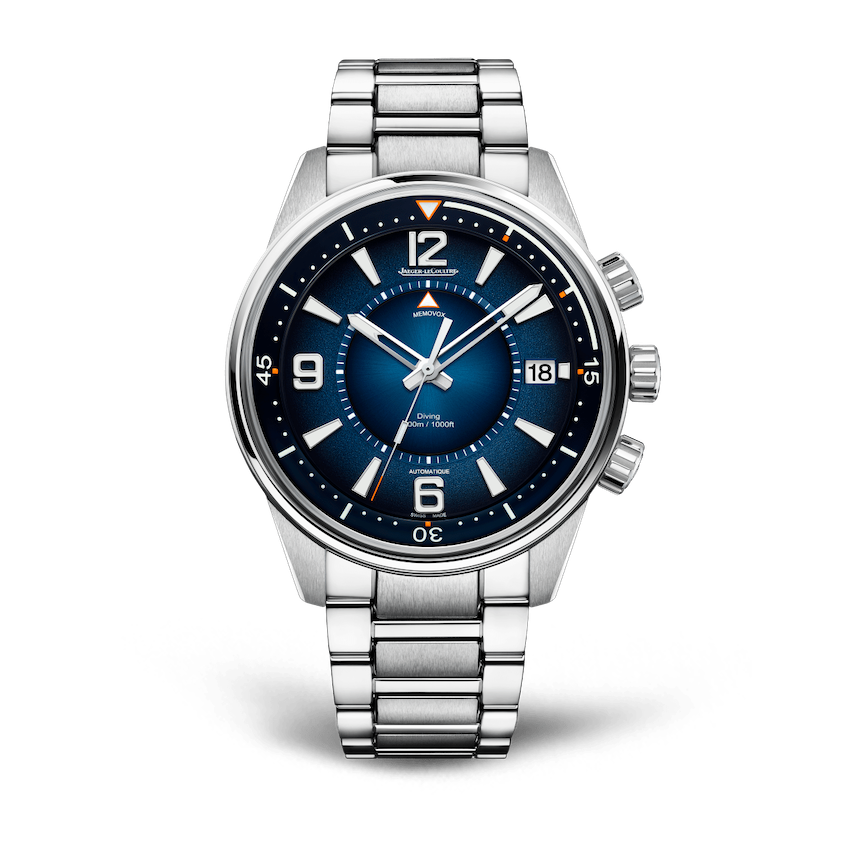 As mentioned, the celebrated Memovox alarm, referred to as The Sound Maker™, pays homage to eh first diving watches. As such, it is only fitting that Jaeger-LeCoultre equip it with a movement that is inspired by the first automatic alarm calibers. The Caliber 956 in this watch was first introduced in 2008 and has been revised for the newest alarm watches. Previous versions featured the gong for the alarm attached to the metal case back. The new versions feature see-through sapphire crystals that allows for viewing of the movement, particularly of the hammer on the gong. This required the watchmakers to relocate the gong to the case side instead of the caseback. The automatic mechanical movement features a heavy metal rotor so that the view of the hammers is never obstructed.

The Polaris Mariner Memovox offers hours, minutes, seconds, date, alarm and rotating inner bezel for diving.  The alarm offers the brand’s signature “school bell” sound – one of the main features that made this watch such a beloved instrument. The alarm is controlled by the top crown, which turns the center dial disk to align the triangle pointer with the alarm time. (The center crown puts the inner dive bezel to work, while the third crown at the bottom is used to set the time.) The watch offers 45 hours of power reserve when fully wound. It retails for $17,600. 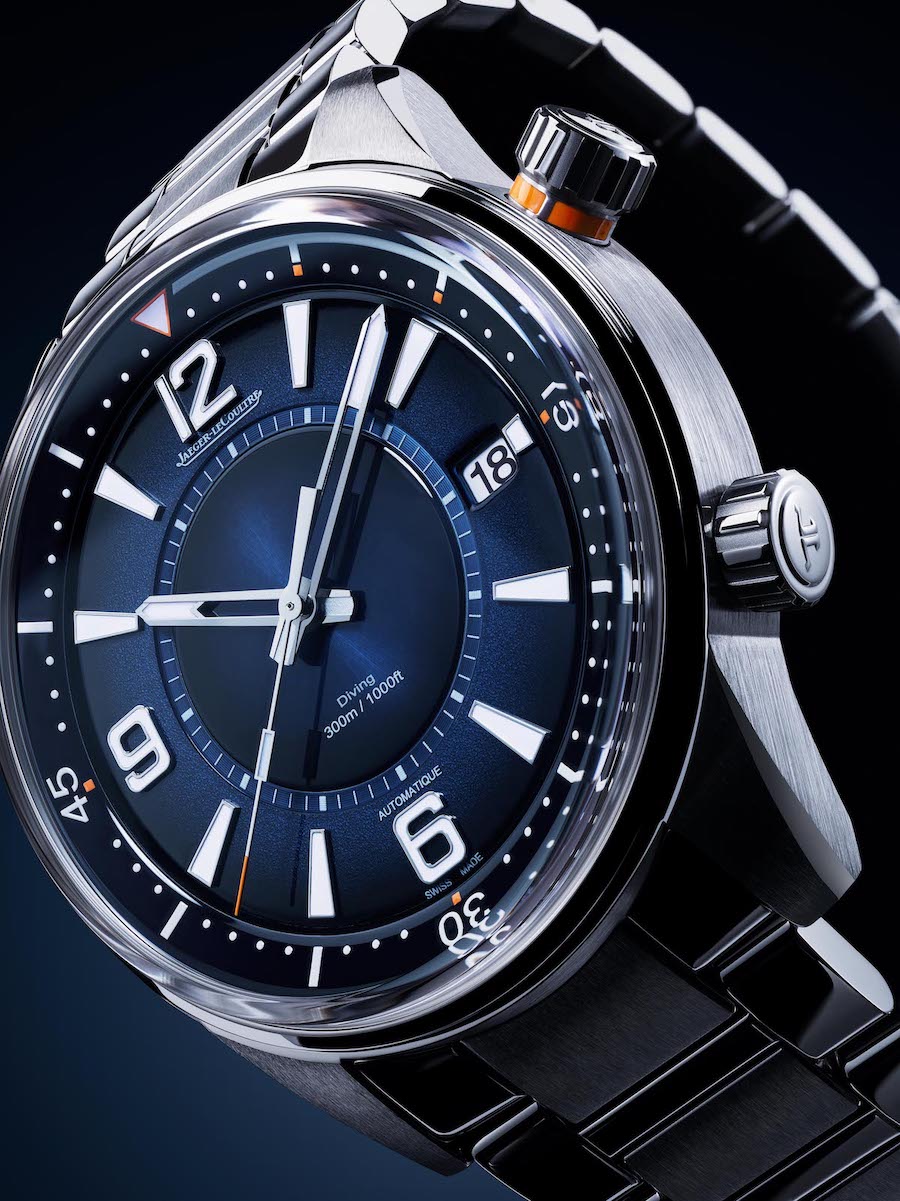 Jaeger-LeCoultre Polaris Mariner Date watch has an orange warning if the date isn’t pushed in properly.

Unlike its more complicated Memovox sibling, the Polaris Mariner Date is a more simplified diving watch. Still water resistant to 300 meters, this watch is powered by the automatic Caliber 899 and offers hours, minutes, seconds, instantly jumping date and unidirectional rotating inner bezel for diving. This watch offers longer power reserve than the Memovox, though, coming in at 70 hours when fully wound.  It retails for $11,000.