Why I Love My M.A.D. 1 Red Watch Better Than Ever 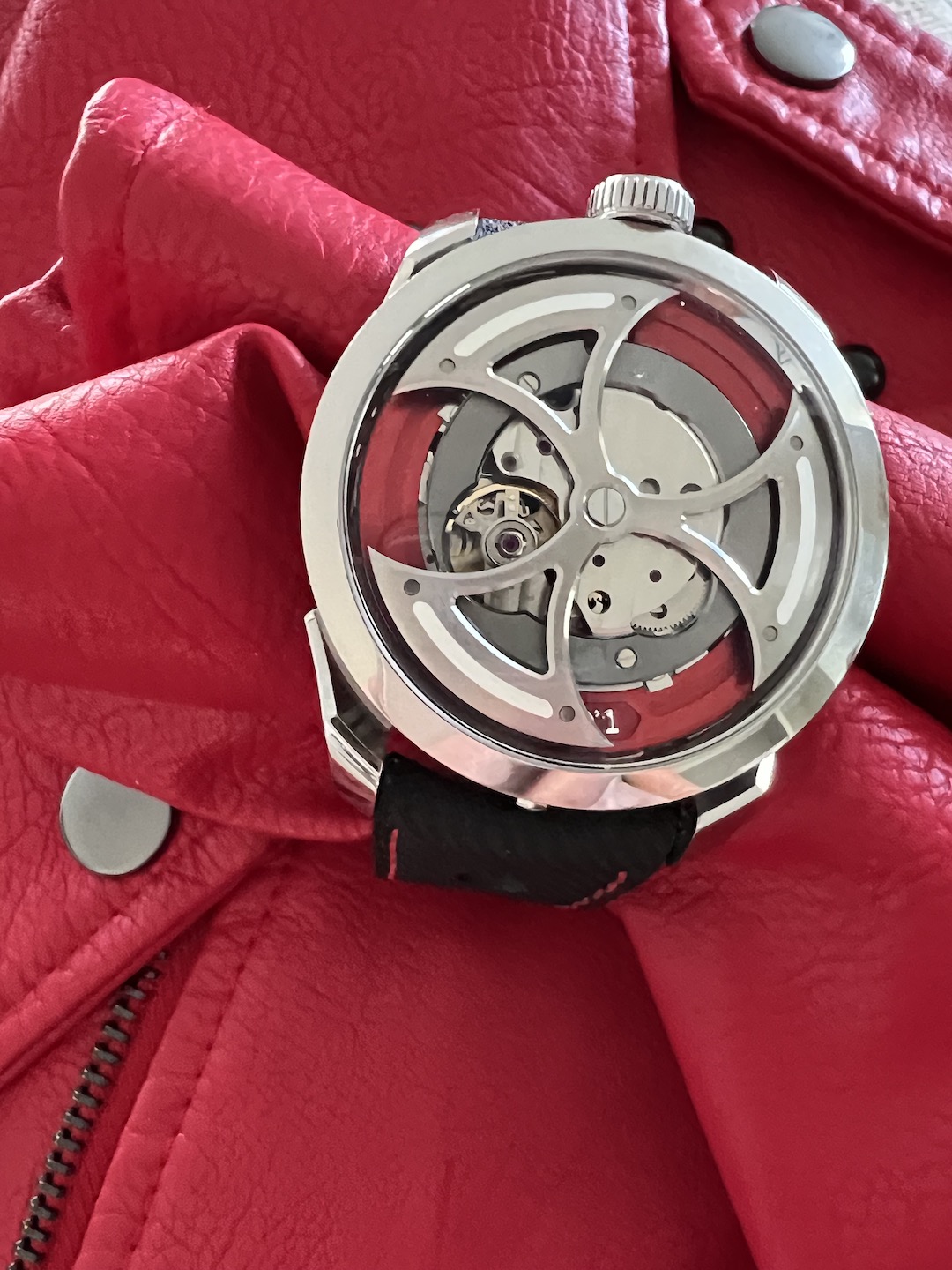 This story was supposed to be a watch review of my M.A.D. 1 Red watch. But it morphed. The reason I love this watch better now than when I first got it is because I thought this watch was gone forever. But it wasn’t. You can read more about that toward the end of the article. Meanwhile, let’s focus on the huge cool factors behind the M.A.D. 1 Red watch by MB&F’s Max Busser. 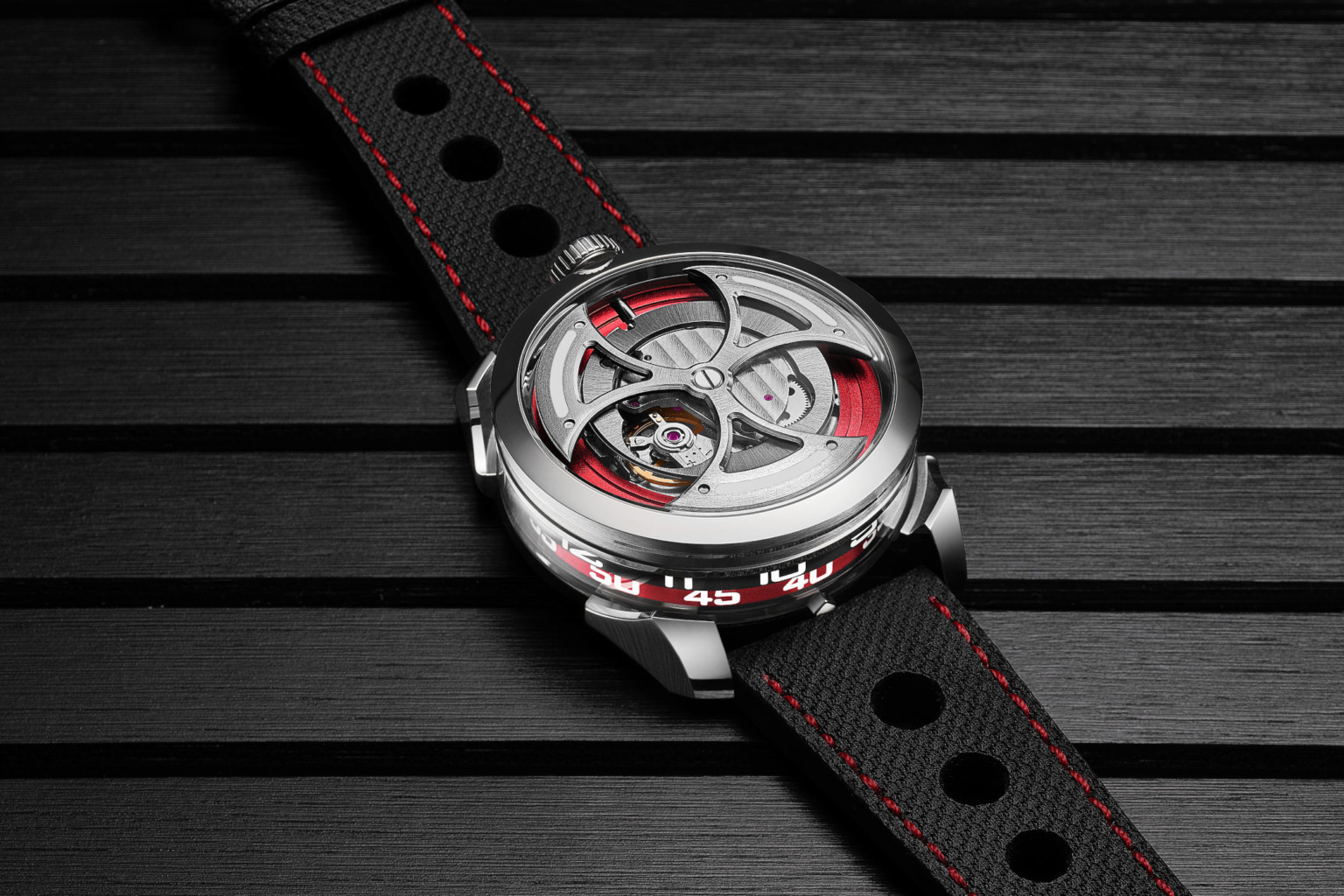 Let’s clear one thing up right away, even though this watch was the brainchild of independent brand MB&F’s Max Busser – a long-time friend of mine—it is not an MB&F watch. There is no such branding on it, and it is not in line with the  (typically $100,000 +)  price points and mechanics of a true MB&F watch. It is, however, space age looking with a lot of signature nods to a Max Busser creation. Sold by the MB&F brand’s M.A.D. Gallery, it is really only available in one of  two ways. 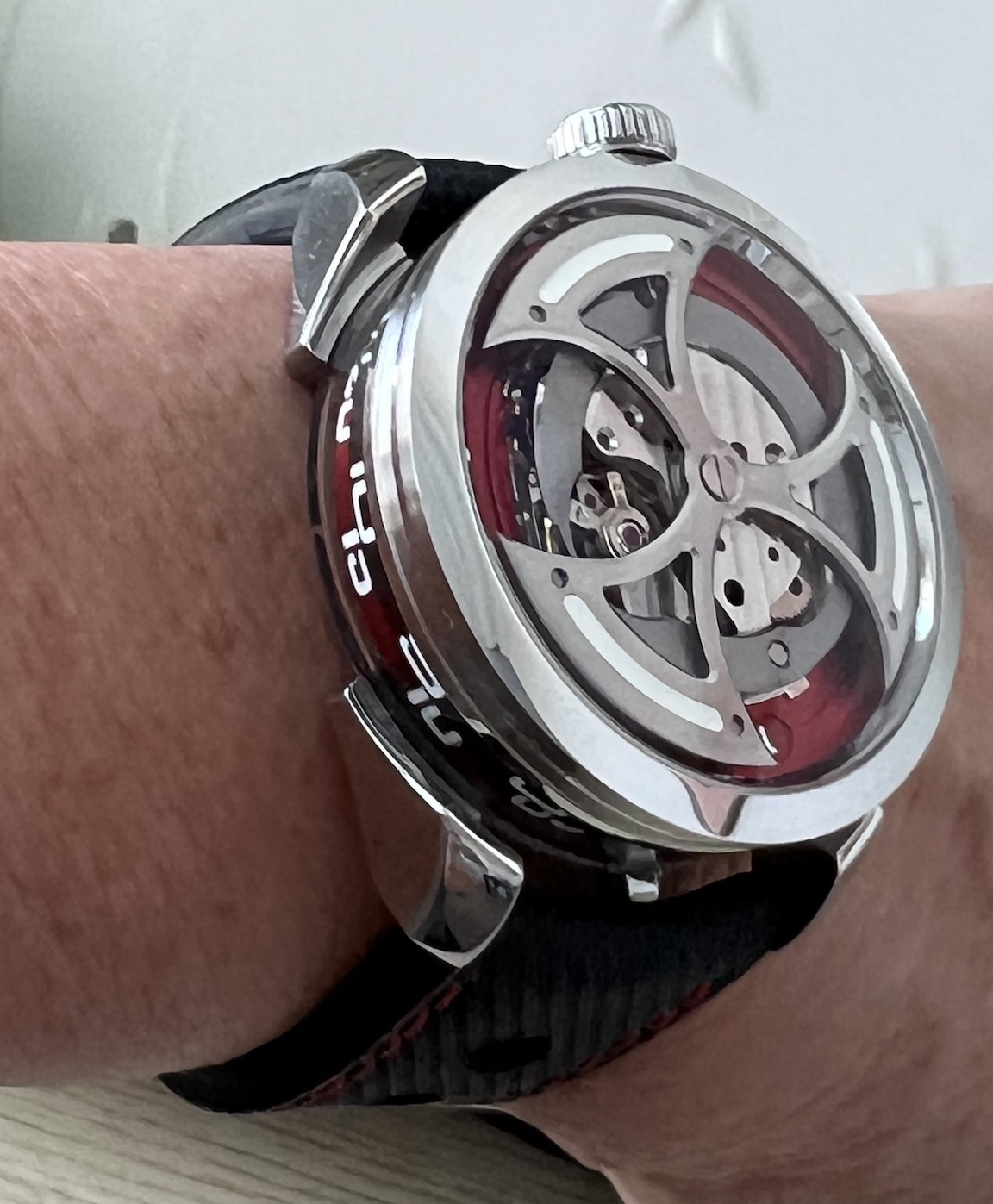 Prior to the Red 1, there was  a Blue version made that was not for sale. It was made exclusively for friends  and partners of the brand as a special thank you. After all, most of them couldn’t afford an MB&F watch. If you saw that blue watch and wrote a letter to Max or MB&F about it,  a RED may have been reserved for you to buy. You could also enter a raffle digitally, which attracted more than 25,000 entries. The price? Just around $2,900, which is slightly higher now.

So, to begin with, you could potentially get a watch conceived of by Max Busser (the MB of the MB&F brand) at a price that even a poor journalist could afford. That’s the first cool factor. For me that was a big one, since I remember sitting with Max outside the Pal Expo during the SIHH show in Geneva about 17 years ago when he was showing me his very first prototype (which blew my mind).

The Wow Factor of the M.A.D. 1 RED watch by MB&F’s Maximilian Busser 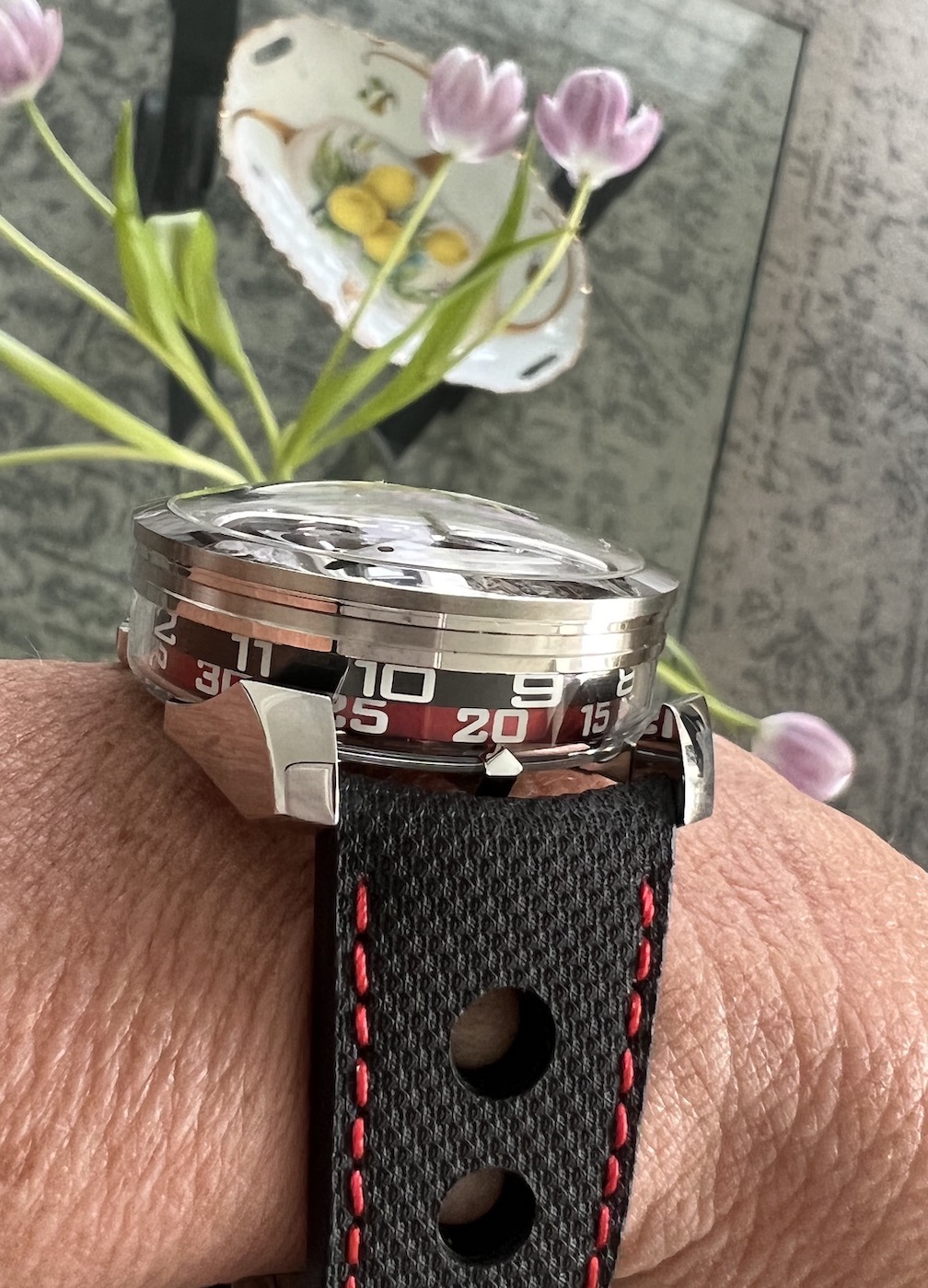 Time is shown on the M.A.D. 1 Red watch via two disks on the case side. The black one is for the hours and the red one is for the minutes (in five-minute increments).

The design of the M.A.D. 1 RED watch is the other wow factor. Powered by an automatic Miyota 821A movement, the watch boasts triple blades on the domed crystal/dial side, a signature of an MB&F watch from the get-go. The constantly spinning (winding) triple blades are the real eye catcher – especially against the red background. It could be called Rad instead of Red. The 3Hz movement offers 60 hours of power reserve and has enough power to drive the large disks on the case side that display the time. 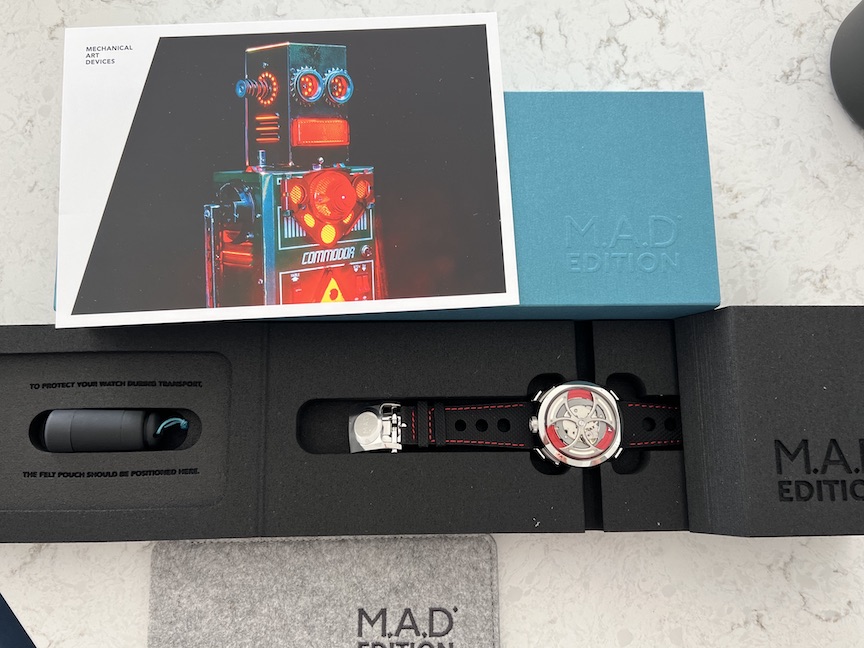 The packaging of the M.A.D. Red 1 watch, complete with flashlight to show off the lume.

Right – the time indication. Time is read on the case side much like a vintage driver’s watch, with a black ring for the hours and a red ring for the minutes. Turn the watch over, and you have more unusual magic. A sapphire crystal lets you get glimpses inside, but the big fan-shaped metal backing is the best, with “It’s a M.A.D. World”  engraved on it, along with the limited edition info. Even the black strap with red stitching is an eye-catcher. Oh, and the lume! Did I mention how this watch glows in the dark? Sick. 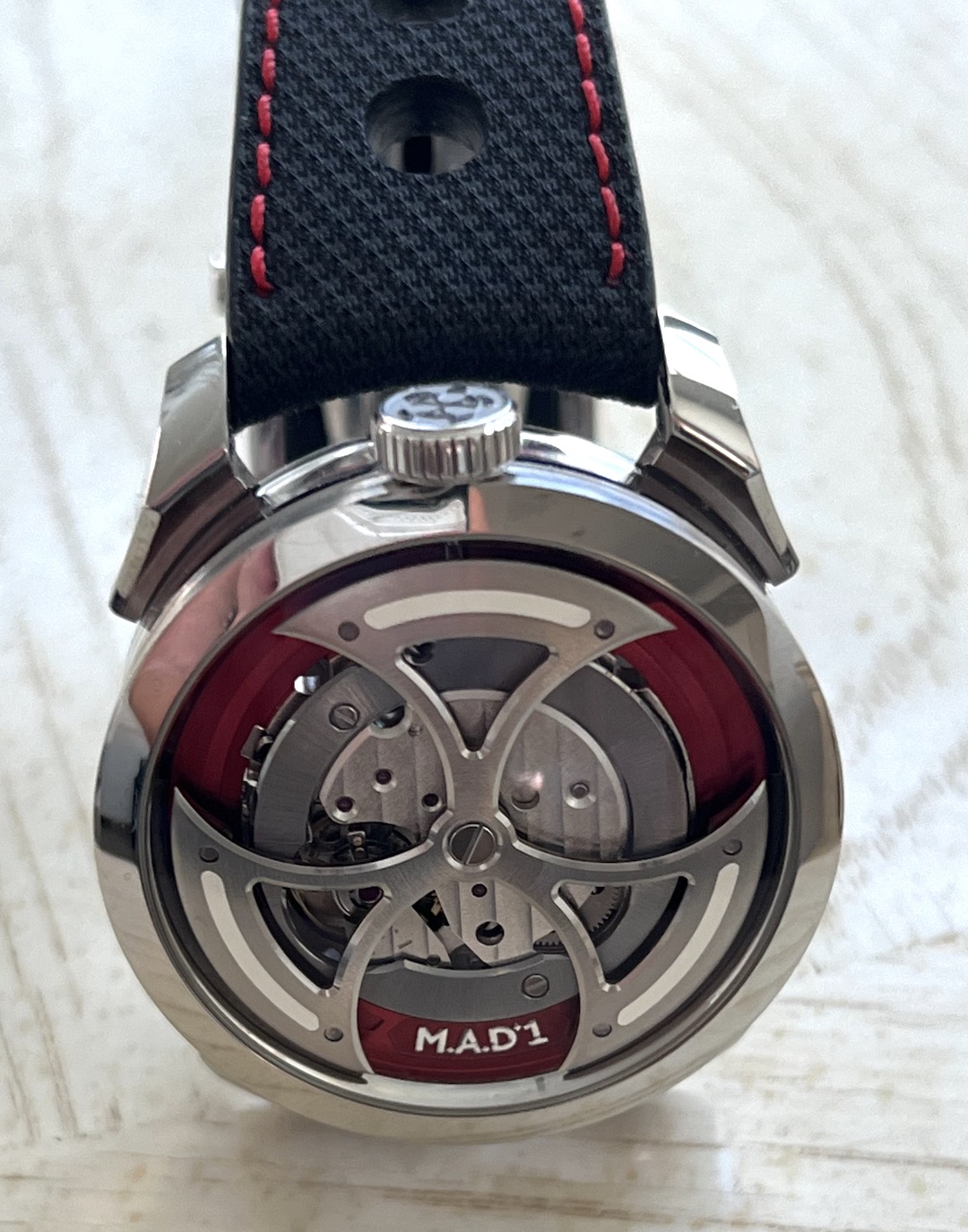 The dial side of the MAD Red 1 watch is constantly in motion when on the wrist thanks to the unidirectional rotors.

It thrilled me to put this watch on my wrist … for so many reasons. I am so proud of Max and what he has accomplished. I am so happy and humbled to be able to own this watch. I am always proud to wear it. That’s why, when I thought this watch was gone forever, I cried, panicked and eventually got it back. Different story. Read on. 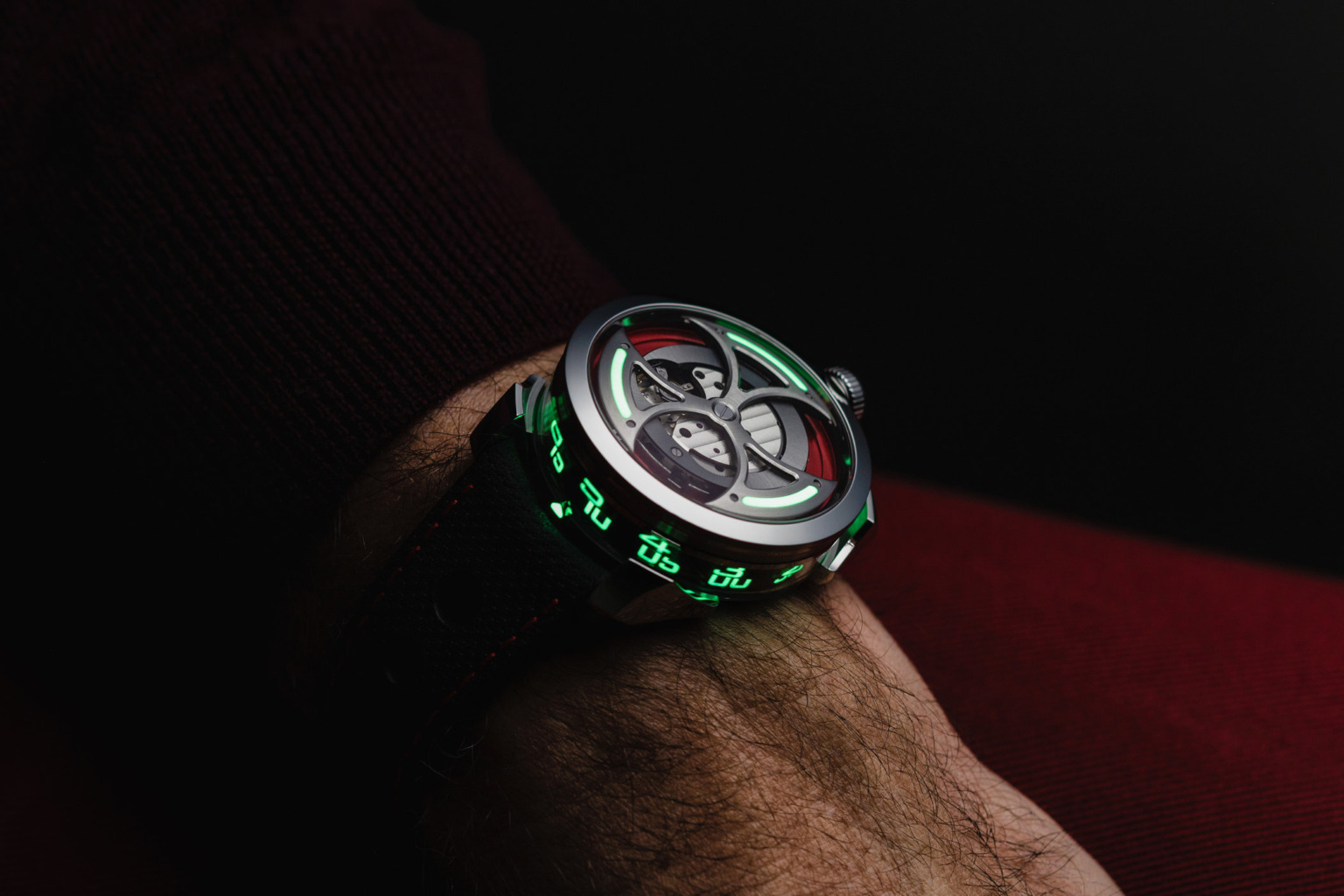 The Power Of “No Questions Asked”

We’ve all had people working in our house: painters, carpenters, plumbers, and more. We are all also pretty comfortable in our own homes. We tend to leave valuables around because we know they’re not going anywhere. Except, sometimes we get complacent. Sometimes we trust too much. Sometimes, a piece of jewelry or a watch that you had on your desk or dresser somehow walks away. That’s sinful, especially when it is a beloved item.

This happened to me. I had a few watches on my desk in my office that I had planned to review. I had painters in to paint the bedroom just down the hall from my office. They left, I tipped them, and that was that. Until a few hours later when I walked into my office and noticed the watches weren’t there. I hunted my house. Had I moved them? Where would I have moved them to? Why would I have moved them. No, I didn’t move them.

The thing was, I had other workers in my house the day before, as well. Were the watches there after they left? I racked my brain. I had no proof. I had no insurance. I had nothing except a gut feeling that they were gone forever.  I panicked. One of those watches was a limited edition that was most likely long sold out – my M.A.D. 1 Red watch.

I was sad, and angry at myself for having left them just out on the desk. I was too trusting. Why had I not closed the door to my office? I was too safe and secure in my little bubble. I didn’t know what to do. I slept on it.

The next day, I decided to call both companies whose workers were in my house. I hadn’t filed a police report yet and I had no proof. I spoke the managers at each company and explained that I wasn’t accusing any particular person. I was just stating that the items were there and now they’re not.

I even went so far as to say: tell your guys if they took them, bring them back. Put them in my mailbox in a bag and there will be no questions asked. That’s it. I just want my watches returned to me. Spread the word.

Well, almost immediately, I received my M.A.D. watch back! I was floored and thrilled at the same time. A few days later, another watch was in my mailbox. I never saw the third, it was most likely already pawned by the time I issued the “No Questions Asked” ask.

It’s ok, I got the best back and learned an incredibly valuable lesson. I have a safe for a reason. I now use it. Hope you get the message here, too.

Top 10: The Most Comprehensive Look ‘Year of the Rabbit’ Watches
December 1, 2022

Introducing The Vacheron Constantin Year Of The Rabbit Watch
December 1, 2022

Introducing the Piaget Year Of The Rabbit Watch
December 1, 2022