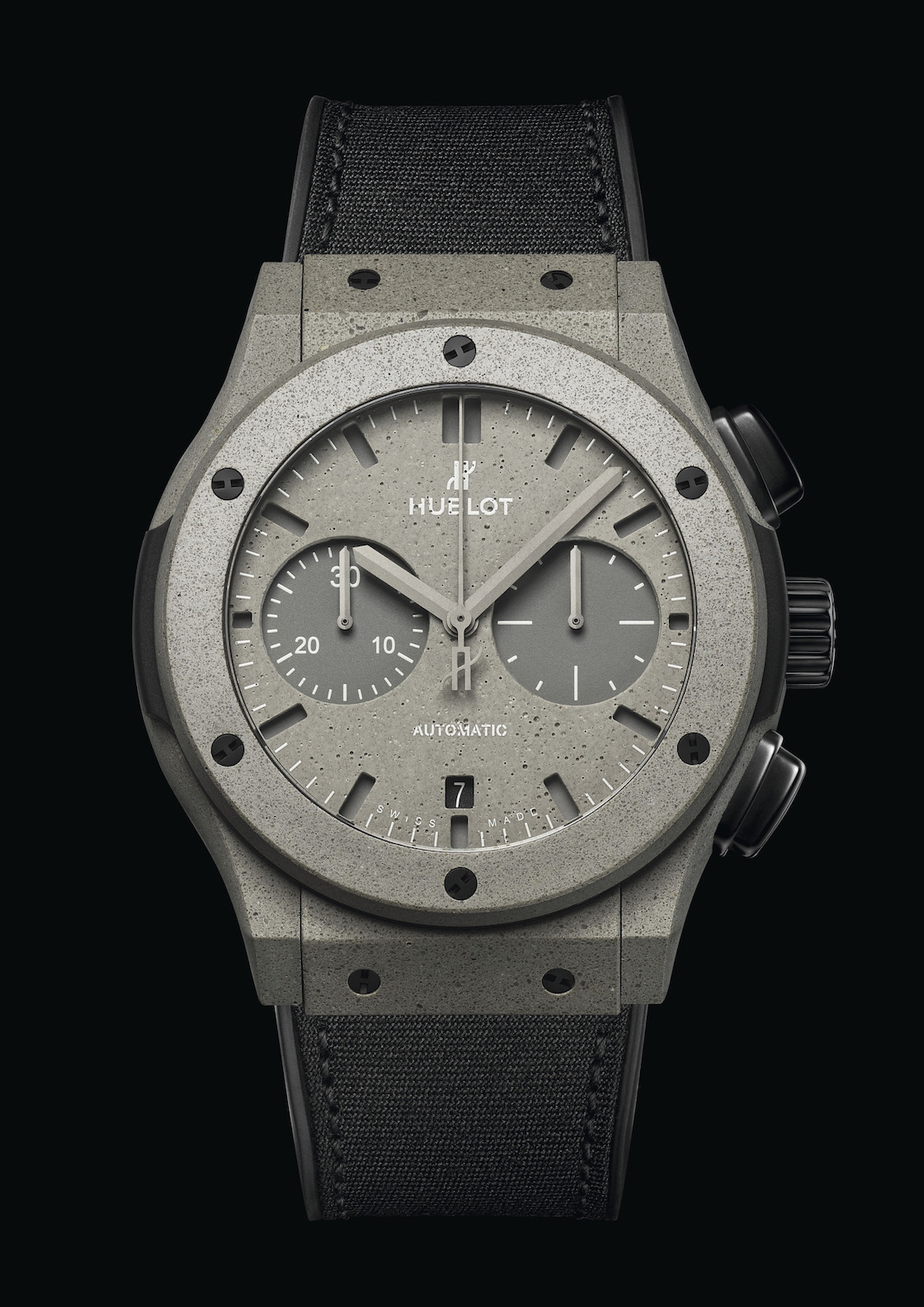 It isn’t the first time a watch has been made of concrete. In fact, for Swiss watch brand Hublot, the newest Concrete Jungle New York watch is its second such creation. The first, released five years ago, had a concrete bezel, but this time, the watch case, dial and bezel are made of cement. Additionally, for the digital launch today, the brand teams with a few of its heavy-hitter New York City  “friends of the brand” to create a social media sensation around the concrete jungle city as well as the watch.

Hublot, like New York City, always wants to be first and different. Bringing the raw material of the city – concrete – to  the Classic Fusion Concrete Jungle New York is a way to combine multiple stories in one. It is a story about materials and innovation; it is a story about perseverance withstanding the test of time, and it is the story of New York. 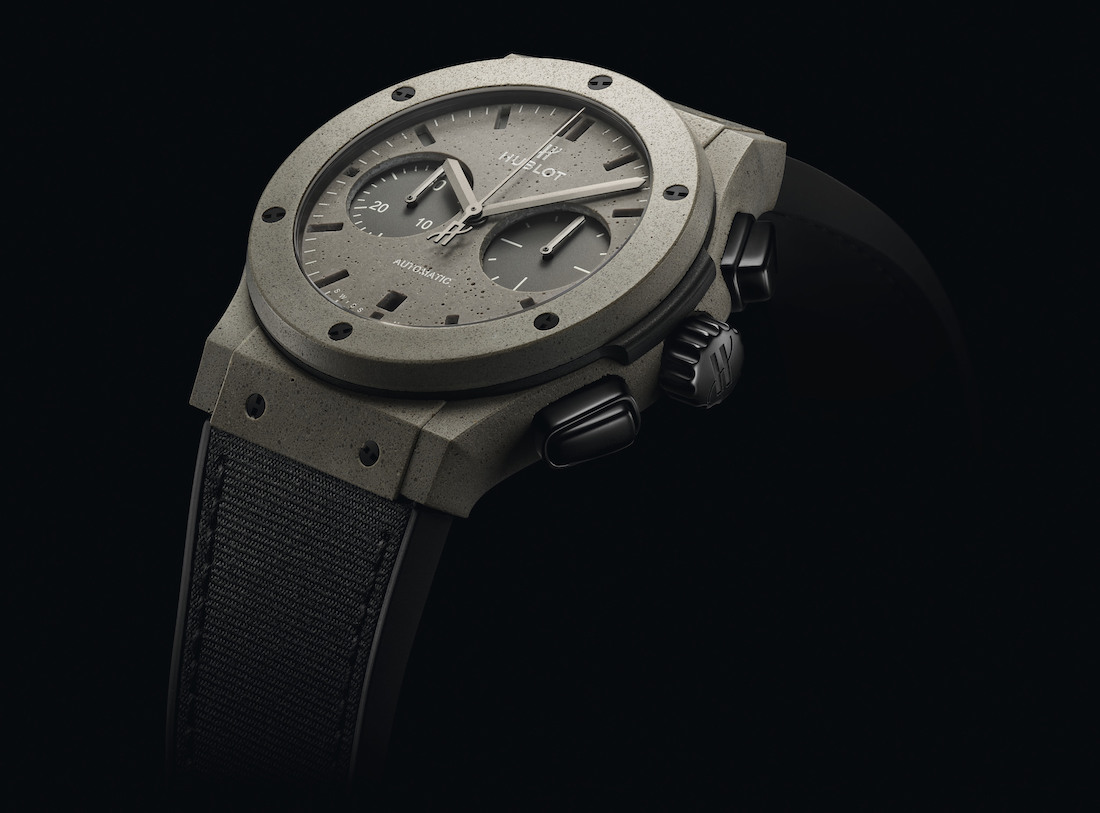 The Hublot Concrete Jungle New York watch is made of cement and epoxy resin to keep it lighter in weight.

The watch case, bezel and dial are made of composite concrete in muted gray shades with a black textile and rubber strap that somehow screams New York. True to its “Art of Fusion” philosophy, Hublot’s design team fused nearly 70 percent fine cement with approximately 25 percent epoxy resin (instead of water as is used in standard concrete) and another 5 to 10 percent of fiberglass (instead of steel). Thanks to an anti-UV additive in the resin the watch will not change color over time and an “anti-graffiti” treatment on the cement, the watch will not be contaminated with dirt.

Additionally, it is not heavy on the wrist thanks to the epoxy resin and fiberglass content. This means it won’t drop like a rock or weigh down the wrist. The material is an evolution of the concrete used in the bezel of the first Concrete Jungle watch and was years in the research and development stages at Hublot’s Nyon, Switzerland, laboratory.

“For the first Concrete Jungle watch, I had an idea that was more of a marketing concept, but the team was very supportive and they worked quite a bit to develop the concrete bezel,” says Jean Francois Sberro, Head of Hublot North America. “But after that watch met with such success, the team started working on another version of the material on their own, to prove to themselves that they could push the envelop and take the concept further to incorporate more concrete pieces.”

The 45mm watch is powered by an in-house-made self-winding chronograph movement with 280 components and is water resistant to 50 meters. It boasts black ceramic pushers and crown. The $18,800 watch is created in a limited edition of just 50 pieces and will be sold online at Hublot and in Hublot’s Fifth Avenue boutique first before other boutiques. 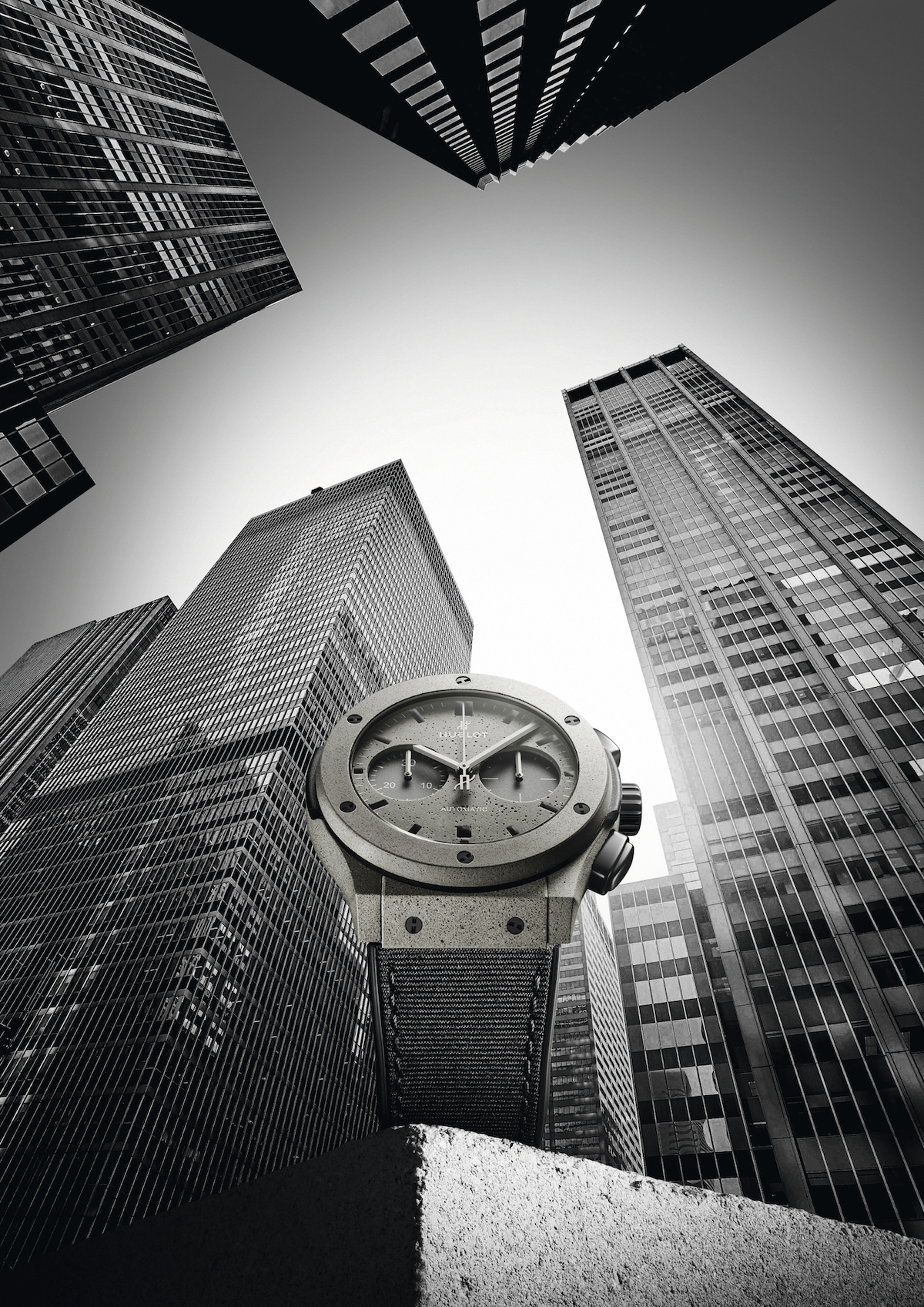 In an interesting move, Hublot enlists the help of Michelin Star Chef Daniel Boulud, 2019 Baseball Hall of Fame Unanimous Choice Inductee Mariano Rivera, and Superbowl champion and television host Victor Cruz for a social media campaign, which will be splashed across all of their social media channels, including Hublot’s.

The entire campaign is designed to celebrate not just the newest Hublot Classic Fusion Concrete Jungle New York watch, which is inspired by the city that never sleeps, but also  — and maybe more importantly during the pandemic –New York. In fact, Hublot’s executives say that the city’s ability to endure and to be a bedrock of strength (as embodied in the “New Yok Strong” motto) was one of the most inspiring attributes for this watch.

“In a year like 2020 that has been so negatively impacted by the Covid crises, we wanted to bring new products to the market to create excitement and to offer an uplifting spirit,” says Sberro. “We wanted to launch it this year to end the year on bang.” 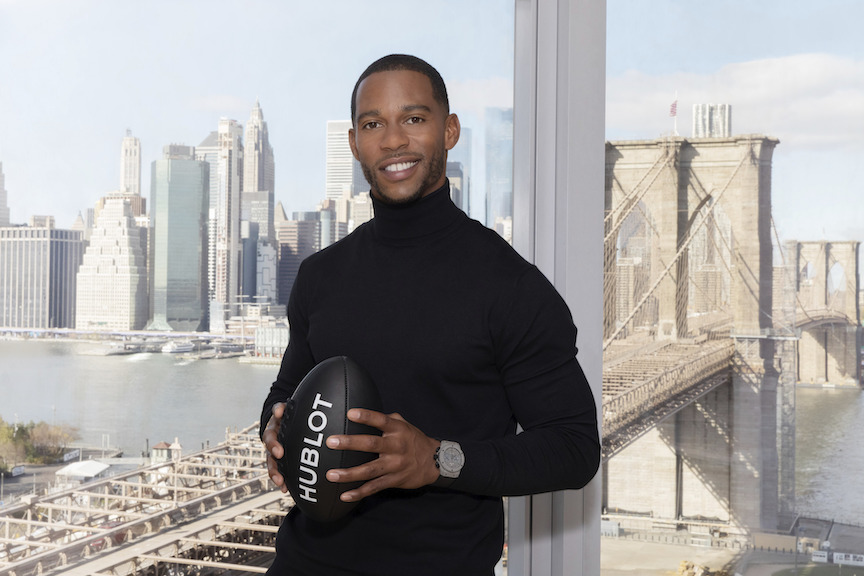 According to Cruz, “When I was told about the concept of this campaign, I felt like it fit exactly where I am in this moment. I’m sure the Concrete Jungle theme resonates with everyone during these times. It’s that grit that makes the people of New York unlike anyone else. We were made to go through difficult times and emerge successful once the smoke clears.”

Cruz, Mariano and Boulud have made an indelible mark on New York, home of Hublot’s largest American flagship store (on Fifth Avenue). For the campaign, each is photographed at an important New York City landmark for the campaign. Cruz has the famed Brooklyn Bridge as his backdrop, while Boulud is photographed in his kitchen at Restaurant Daniel, and Rivera stands in front of the legendary Statue of Liberty. 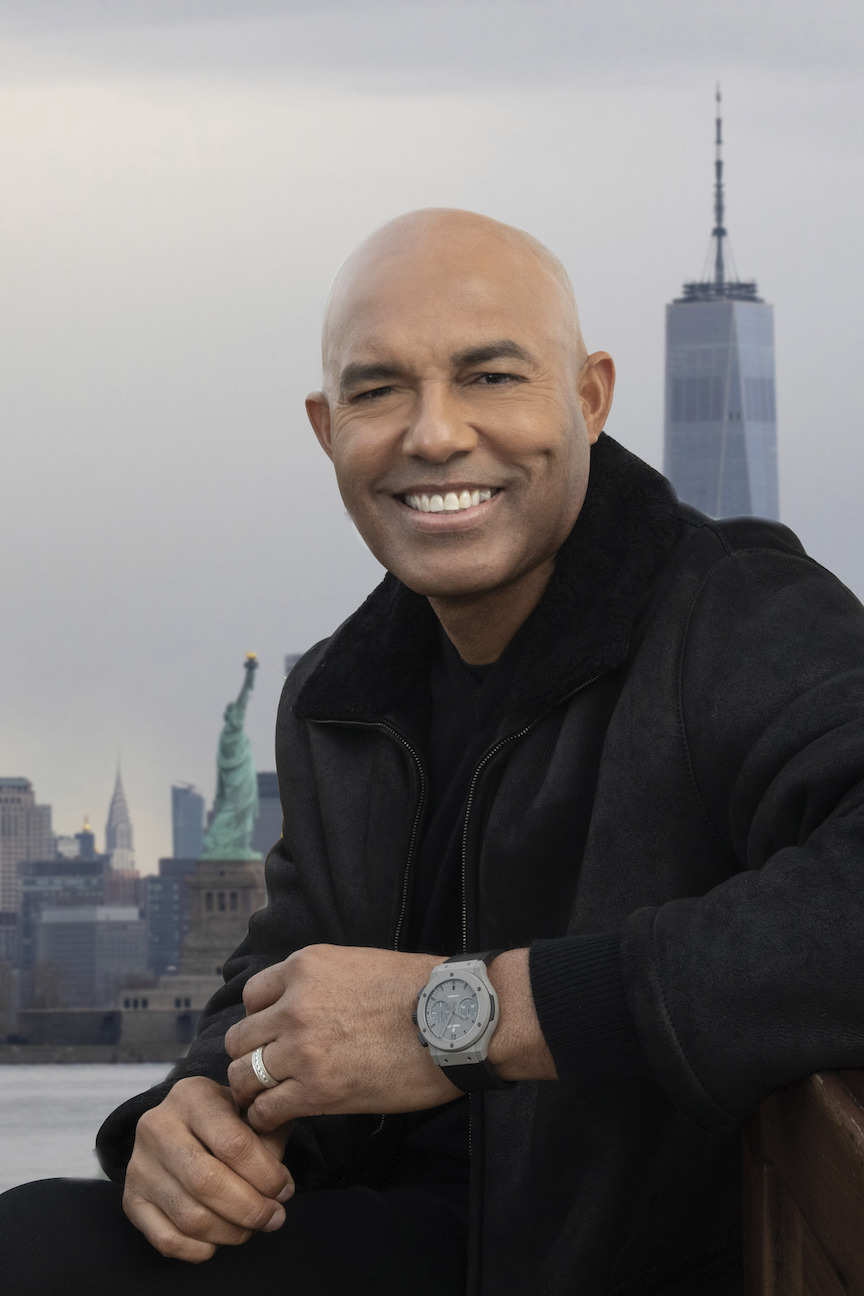 “Once a New Yorker, always a New Yorker,” says Mariano Rivera. “I have experienced the highs and lows alongside this city and am honored to take part in a campaign that shows New York’s true spirit of strength and energy.”

“Nourishing the people of New York for the past two decades has been a blessing,” says Daniel Boulud. “Though it has been a very different year, we are grateful for how strong the city and its people have proven themselves to be. Just as we are constantly adjusting our kitchens to reflect the times and what is important, we are always looking for ingenuity, and New York City has driven us to stay inspired and passionate. This surprising watch is a perfect representation of the city’s creativity and strength, and I am proud to pay tribute to New York with Hublot.” 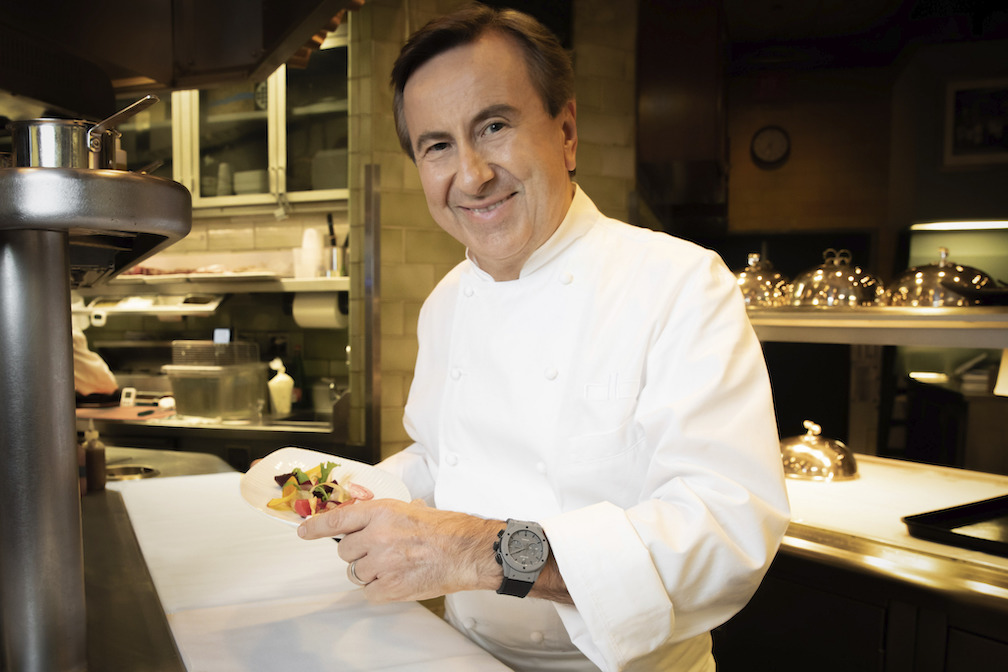 A friend of Hublot, Chef Daniel Boulud is photographed in his kitchen, wearing the Hublot Concrete Jungle New York watch.