What Goes Into The Making Of A One-Off New-Brand Watch: The Birth Of Paolo Mathai Kaleidoscopic Watch 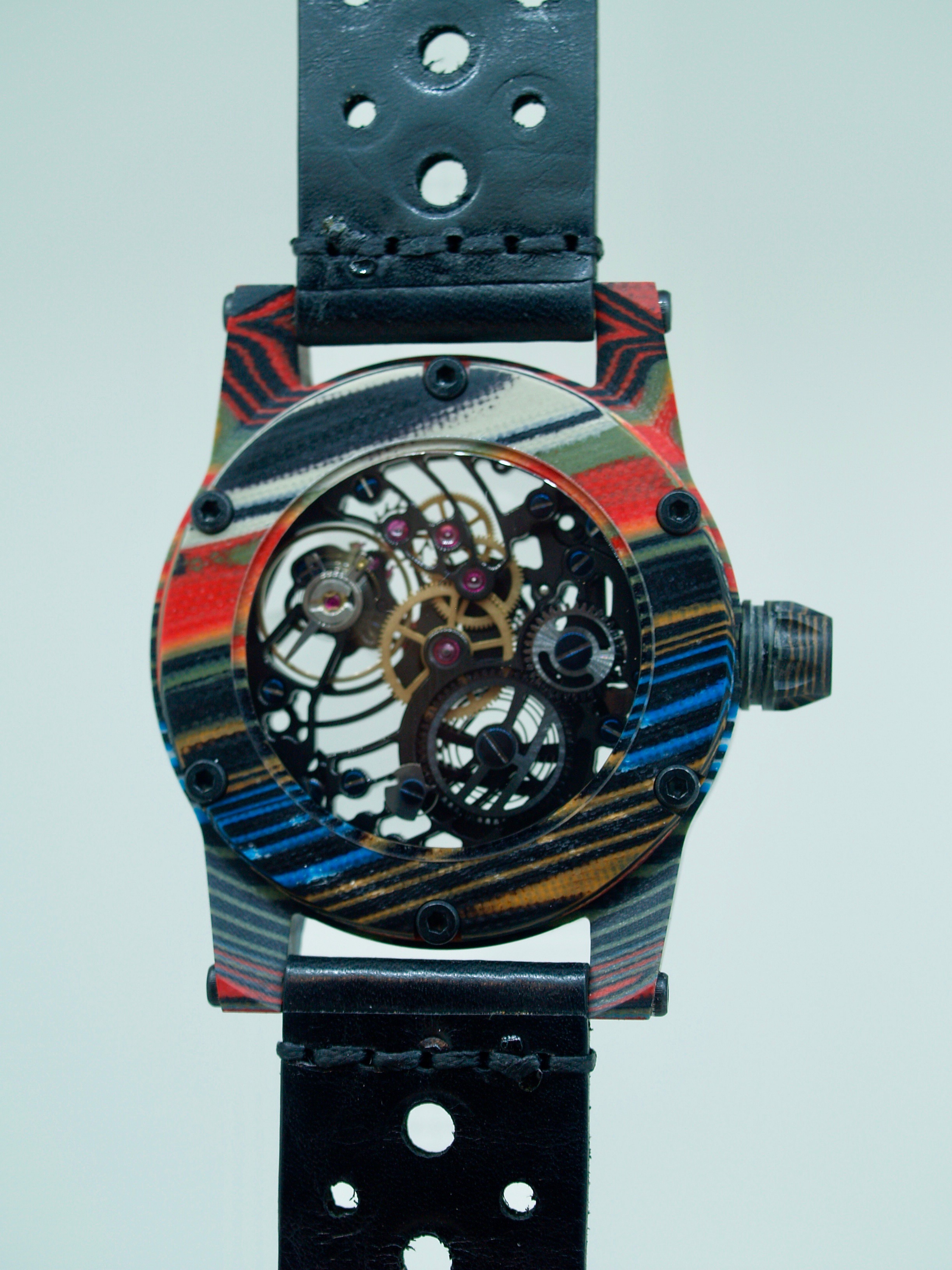 I can’t pinpoint the exact moment when I first became interested in horology, but it was definitely at an early age. Later in life after several creative endeavors, I started collecting timepieces — mostly Swiss mechanical. In comparison to some enthusiasts, my collection was fairly modest in size and price level. However, all the designs were bold, oversized and relatively unique. At this stage (approximately 8-years ago), I became a writer and was fascinated to see how the watch industry was changing. Watchmakers like De Bethune, MB & F and Urwerk were having a huge impact on the market. I became fascinated with the idea of creating my own timepieces.

Originally, I had wanted to get insight from a watchmaker’s perspective to give my reviews more integrity. From that research, though,  I learned that it is relatively easy to produce a generic stainless steel watch with a personalized dial. However, if you want something bespoke, made with more exotic materials (like bronze, carbon, titanium, etc.), the manufacturing process is much more complicated and lengthy. Fortunately, my good friend (watchmaker and renowned Jet Engineer) Frank Heydrich agreed to collaborate on my first watch project called the Polaris. The concept was inspired by a famous 1947’s ball clock from acclaimed 20th Century industrial designer George Nelson. The end result was a 3-D printed titanium concept watch with 3D globe markers. I learned many valuable lessons collaborating with Heydrich on the Polaris, and opted to continue on my quest and create yet another watch. 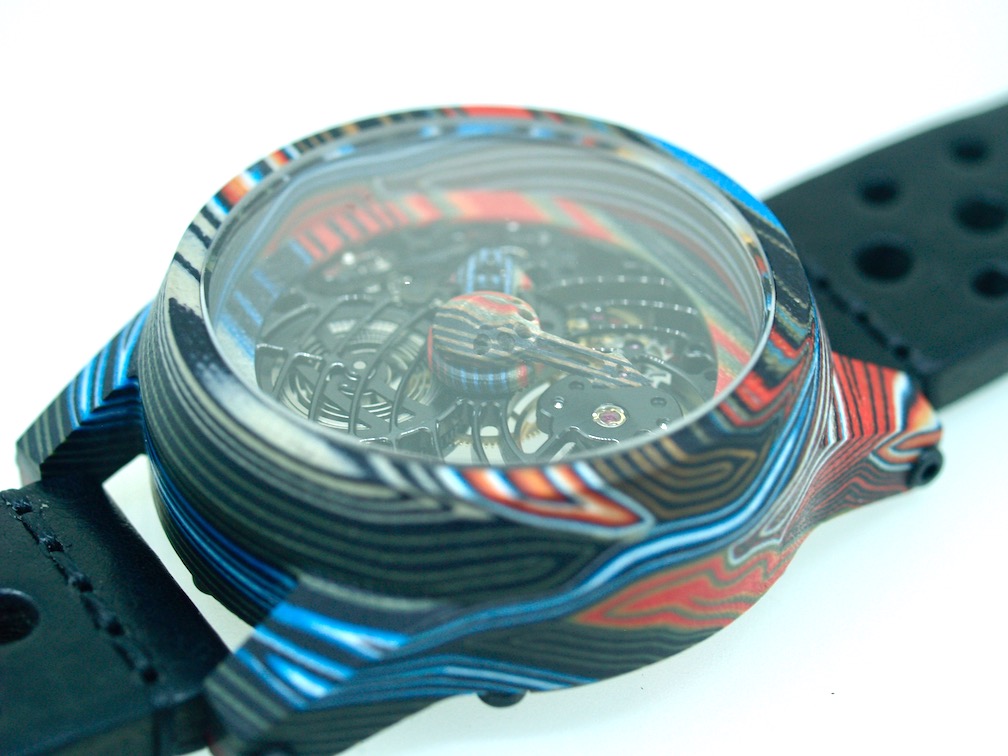 This was the beginning of Paolo Mathia Horology and the Kaleidoscopic watch. For this timepiece, I wanted to create a totally different aesthetic than the Polaris.  A few years earlier (circa 2015), I was talking with a supplier about a super lightweight material called Graphene (a material employed effectively by Richard Mille in the phenomenal RM 50-03, a collaboration with McLaren). It inspired me to find another unique material for future projects.

In my search, I discovered a specialist company that makes carbon components for the automotive industry. They were experimenting with many unusual composites, including a very distinctive multi-colored material. I have never seen material like this before. Aesthetically it is reminiscent of Australian Indigenous art because of the interwoven pattern. For me, this was a eureka moment and I immediately contacted them.

I send them Heydrich’s CAD drawings, and the directive to produce a case, hands and crown cover from this unique fabric. Literally, 10-days later, all the parts arrived at my watchmaker’s (Ben Birkett) workshop. I then ordered some custom-made sapphire crystals and a Swiss mechanical Unitas 6497-1 skeleton movement. 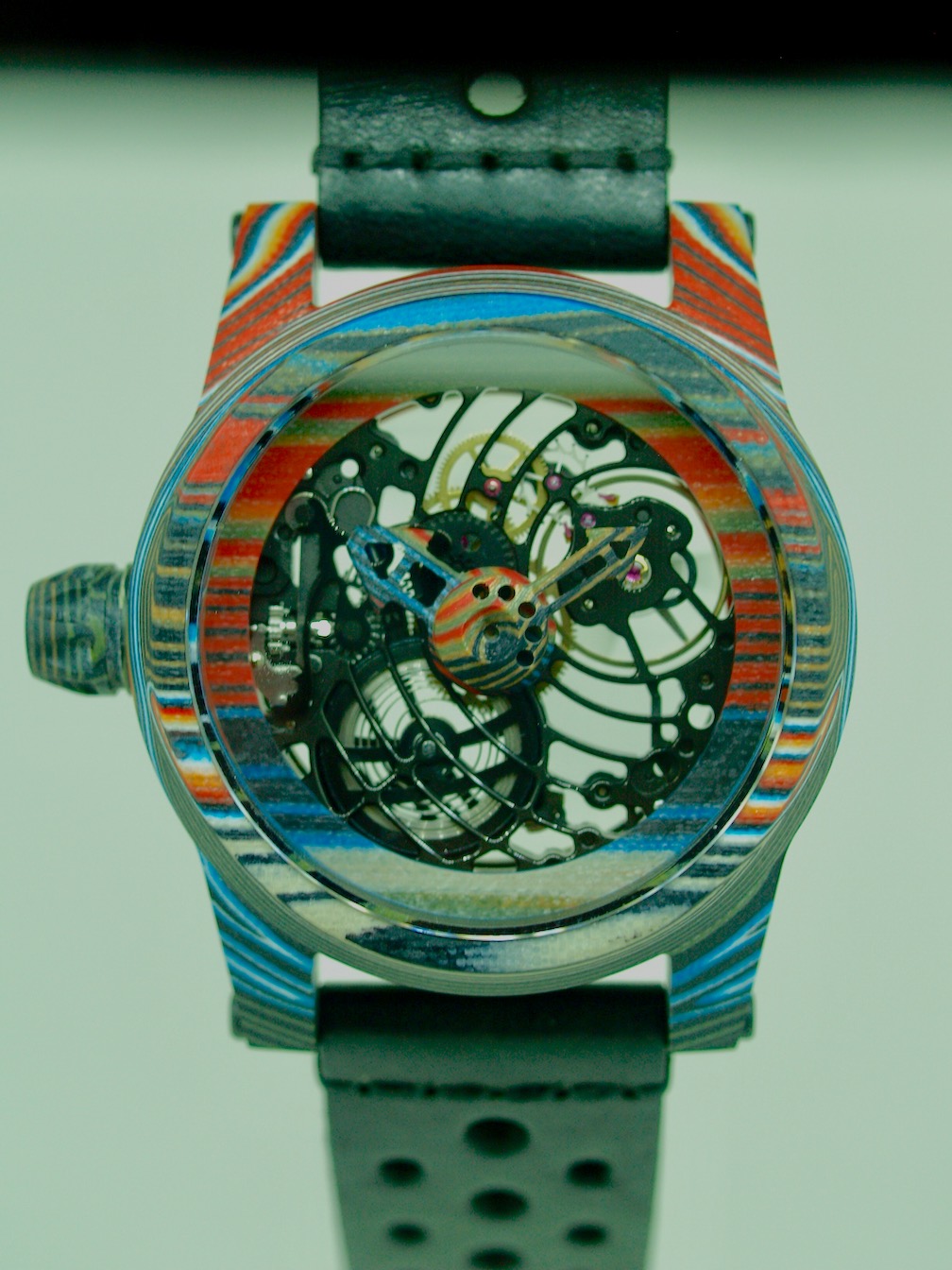 Originally, both Ben and I thought this would be a pretty straightforward assembly job. However, we later discovered that the CAD drawings were only a loose guide; various adjustments needed to be made. This just illustrates further the challenges designers have getting a product to market.  It ended up taking Ben almost two days to calibrate the parts, a testament to his extraordinary skillset. In fact, without his technical expertise, the Kaleidoscopic would have never seen the light of day.

Details of the Kaleidoscopic Watch

The minimalistic façade of the Kaleidoscopic is the perfect complement to the multi-colored carbon composite. The material is so distinctive that any other details would detract from the overall composition. That is why the watch is devoid of markers, logos, inscriptions etc. Considering the watch is 52mm x 20mm, it is also exceedingly lightweight and comfortable to wear.

At the moment the Kaleidoscopic is a unique 1/1 piece (rather than a prototype) and it is my hope to bring it to production, most likely with certain modifications to the design. However, making modifications is a process many brands encounter when developing new models.

To power this watch, I decided to use an Art-Deco style Unitas 6497-1 black skeleton movement that was sourced from a supplier in Switzerland. This caliber is easily accessible and ideal for oversized watches because it has a diameter measuring 36.6mm (16.5 lignes). I also like mechanical hand-winding movements and therefore it seemed like a perfect choice. In future, I might look at different custom made mechanisms in brighter colours. As a final touch, I procured a custom-made black leather strap with a carbon fiber buckle from Ingomar Gaksch, a craftsman in Austria. This band is ideal for this project but might have to be refined for a production model.