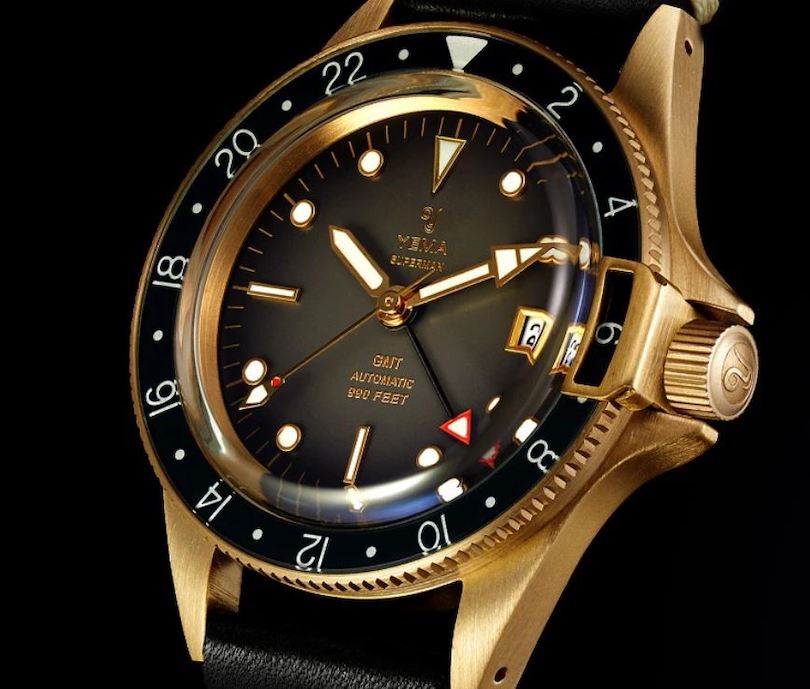 First founded in France in 1948 by Henry Louis Belmont, Yema created some important watch for divers, yachtsmen and even racers in the 1960’s. The brand even went into space flight in the early 1980’s and to the North Pole in the late 1980’s. The brand then came under the ownership of Seiko Watch Corporation, but returned to French ownership in 2004. In 2009, the brand created its first in-house mechanical movement, and today, it continues to create watches designed for adventurers. Interestingly enough, the brand introduces the Yema Superman GMT Bronze watch (based on a model from the ’60’s) and opts to release it via kickstarter for those who want to opt in at a value price.

As collectors we often hear the phrase, “If it speaks to you, buy it.” A curious statement that might be lost on individuals who lack an appreciation for the horological arts, yet one that is immediately understood by those of us fanatics who can spot a tourbillon from 50 paces. All that is needed to know if a watch is speaking to you is to listen for, and appreciate, its design language.

Since returning to French-owned hands following years of Seiko stewardship, Yema has finally begun to step out and speak to a universal audience with a new voice, one that is epitomized by the recently-released Superman GMT Bronze. For those of us who frequently wear multiple watches, it can be very easy to become a bit unenthusiastic over yet another new release. Occasionally, however, a watch like the Superman GMT comes along and from the first moment you are struck with the feeling that this watch is somehow different. 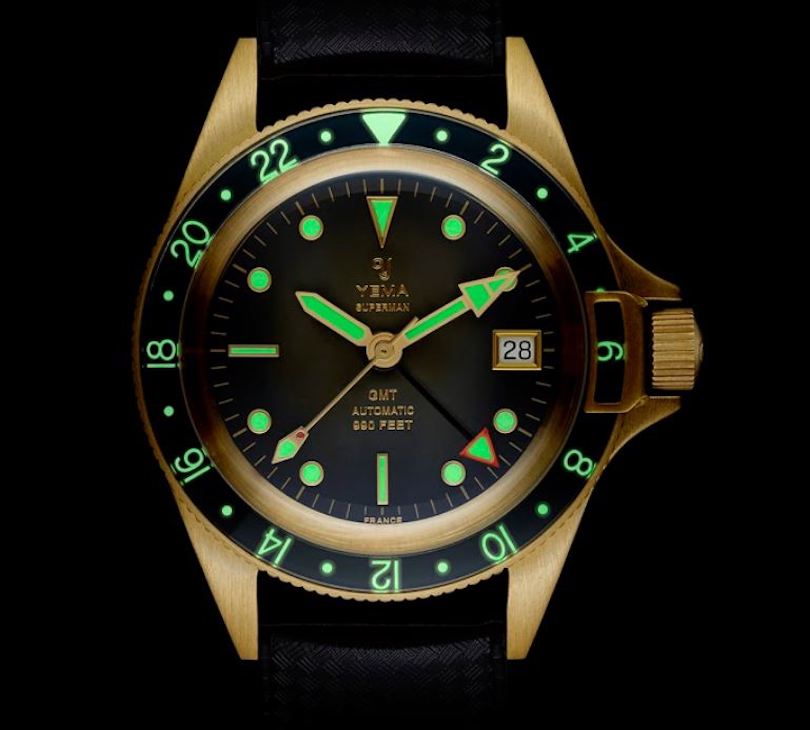 From the first glance, the most visually striking element of the watch is the black and bronze color combination. While the GMT is also available in a blue-dial version, reminiscent of its cousin, the time-only Superman Heritage Bronze, it is the black-dial version that really steals the show. There exists an unmistakable elegance created by the combination of black and bronze, and the color elements are meted out here in just the right ratio, much like an expert chef instinctively knowing the exact amounts of cacao and butter to add in order to create the perfect chocolate mousse.

Being a product of Yema’s meticulous atelier, however, the designers would certainly not be content with simply throwing black and gold together and calling it a day. Rather, there exists a thoughtful internal contrast within the individual colors themselves that reveals itself only after some time on the wrist. The golden glow of the bronze case plays against the shiny gold accents of the handset and marker borders. Meanwhile, the jet black of the bezel insert and the outer periphery of the dial, gives way in a subtle graduated progression to what appears to be a dusting of powdered sugar near the center that builds a visual bridge to the white bezel numerals and marker lume, deftly uniting the entire watch into a visually pleasing whole. The white numerals and markers also lend an additional touch of sophistication to the black-dialed version reminiscent of a tuxedo.

The last color element to make an appearance are two blood-red accents at the tip of the seconds and GMT hand, judiciously added in small doses and serve to give the dial a pop of life, contrasting very nicely with the more understated main colors. 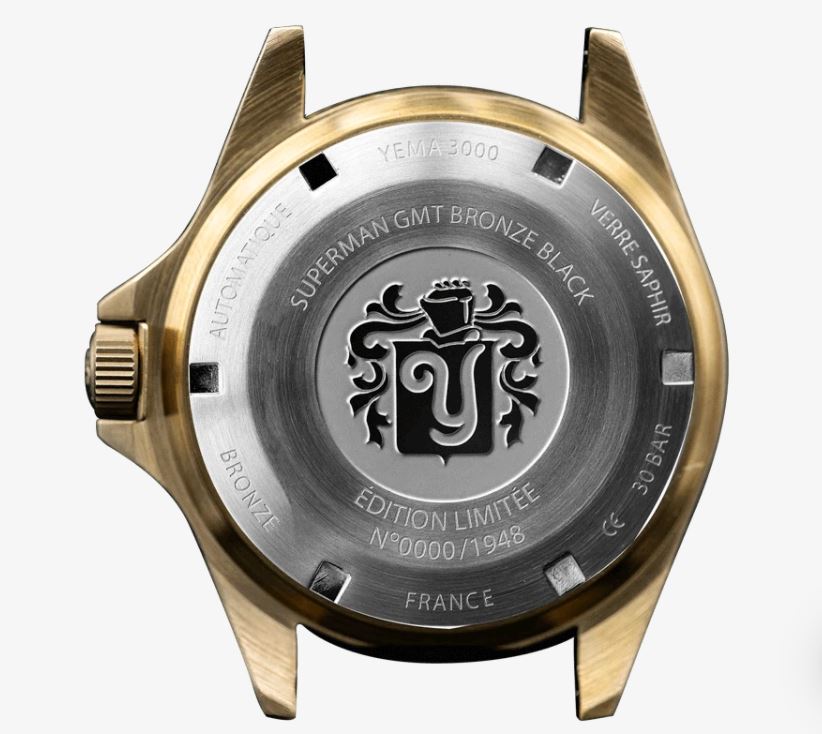 Upon further contemplation, the entire watch itself is a study in contrasts. It must be remembered that despite its elegant looks and a stylish design that would not look out of place paired with a suit and tie, this is at its core a rugged tool watch built to withstand real-world conditions. The bronze case – although possessing graceful curves and balanced proportions – is rated for 300 meters of water resistance and the alloy mixture chosen by Yema is especially suited to withstanding the harsh conditions of a marine environment. Additionally, the protected crown, which is thoughtfully engraved with the Yema “Y” logo, screws down for additional security. Completing the package, a stainless steel caseback joins bronze case and is engraved with the Yema coat of arms and an individual production number.

Much like the Superman Heritage Bronze, introduced a year earlier, the GMT retains small details from the original Superman models of the 1960s, including the shovel-tipped seconds hand and the iconic bezel lock. Unlike the Superman Heritage Bronze, however, Yema decided on a sapphire-capped bezel insert for the GMT rather than engraving the numerals directly into the bezel. This gives the GMT a more polished look as opposed to the utilitarian feel of its three-handed predecessor. Yet regardless of their outward appearances, both watches share the same build, and the GMT should prove every bit as resilient and able to handle whatever rough treatment is thrown its way. 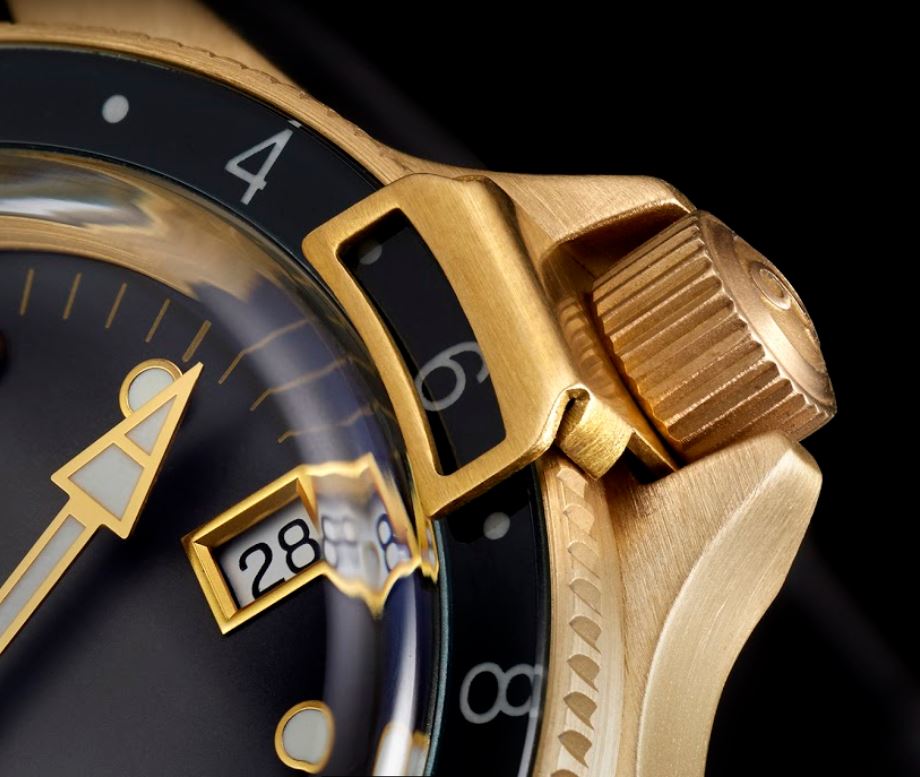 Yema Superman GMT Bronze Details, Inside and Out

The introduction of the GMT also serves as the launch vehicle for the new in-house caliber YEMA3000. Designed and assembled at Yema’s headquarters in Morteau, France, its function as a 24- hour world timer seems rather appropriate with parts being sourced globally from, France, Switzerland and Asia. The new new GMT movements were developed using the MBP1000 as its base which was Yema’s first in-house caliber released in 2011. The 29-jewel YEMA3000 beats at 4Hz and is boasts 42 hours of power reserve.

The gold framed date aperture at three o’clock can be quick set in the same crown position that the GMT is advanced in one-hour increments. Yema will make both the blue and black dial versions available in 39 or 41 millimeter case sizes and with leather or tropic strap options. Each version will be limited to 1,948 numbered examples, representing the year of Yema’s founding. The watches are available for pre-order on kickstarter at $749, about half of what the full retail cost will be.

( *Eric Gregoire is a writer and collector who has been restoring vintage watches for over 20 years. His new book. “Eternal Springs: An Introduction to the World of Mechanical Watches” is now available for purchase and download at Amazon.)