Watch Review: The Good, the Bad and the Ugly of the MB&F HM7 Aquapod, Jellyfish 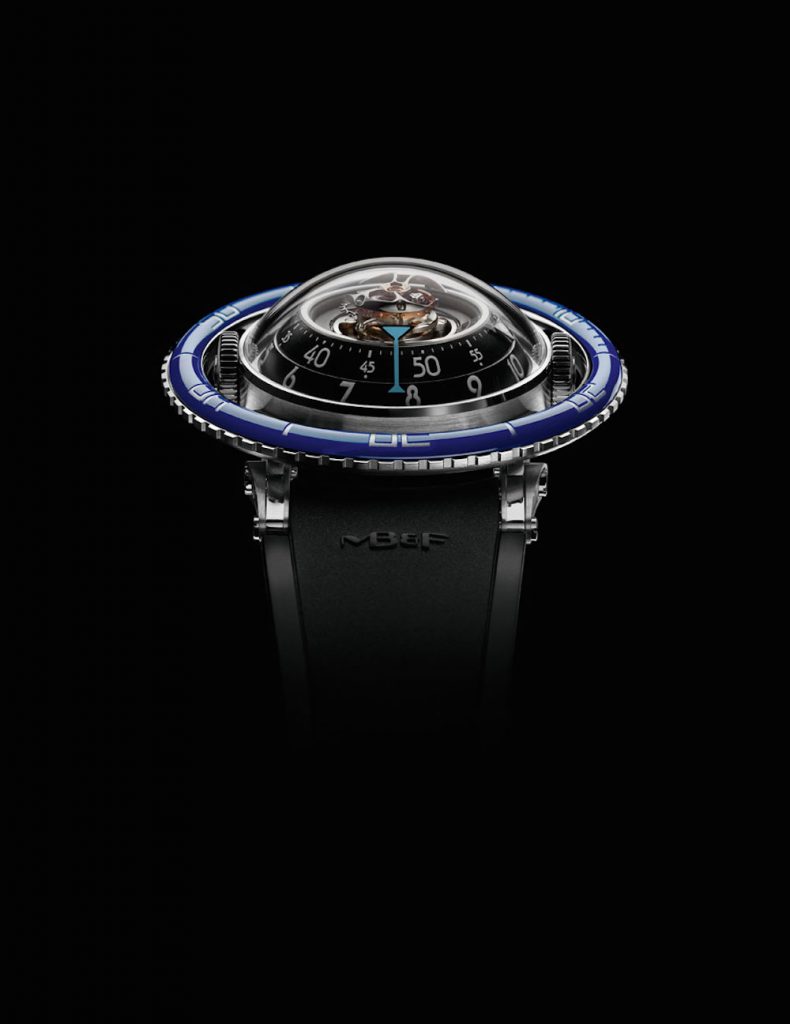 Officially unveiled at SIHH and making another important appearance at Baselworld 2017, the  MB&F HM7 Aquapod, lovingly nicknamed Jellyfish, warrants a closer look for several reasons — not the least o which is the fact that the brand slipped another “round” watch in front of us without anyone really even noticing.  Here we take a close-up look at the MB&F HM7 Aquapod Jellyfish.

Max Busser and friends lovingly refer to the watch as jellyfish, although, doubtless Busser’s wife does not share the loving note. The watch was conceived of by Busser after his wife was stung by a large jellyfish with long shimmering tentacles and a real sting. In fact, the architecture of the case resembles a jellyfish, with moving parts and electric color meant to emulate the water creature.

The main features of the MB&F HM7 Aquapod 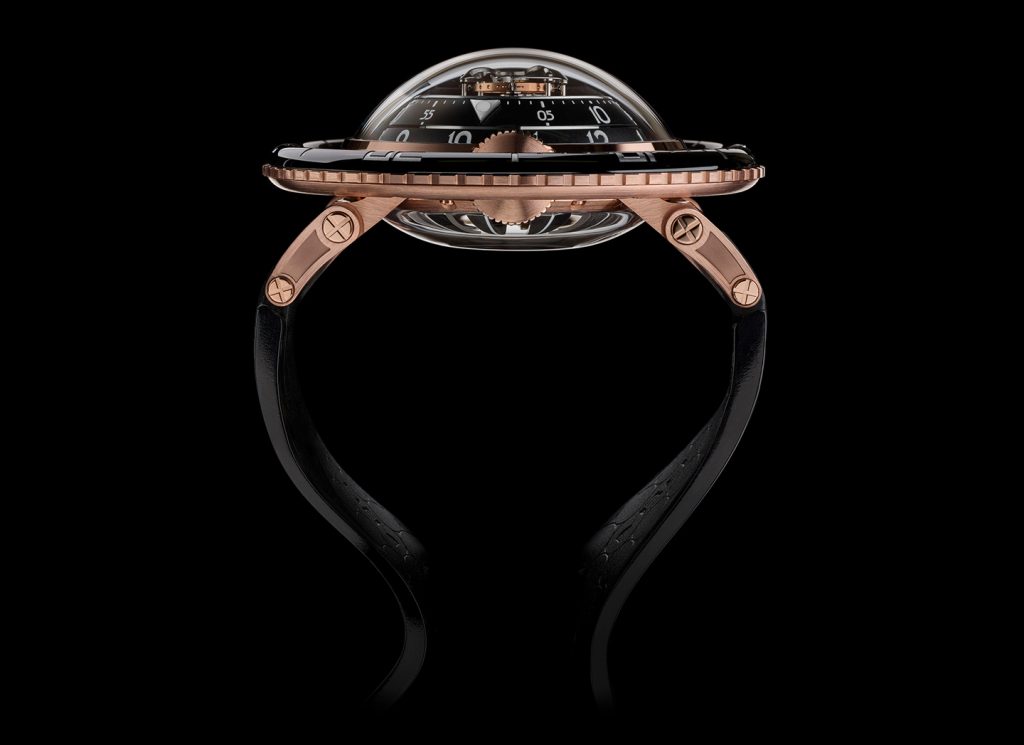 Several years in the making, the HM7 Aquapod is a three-dimensional delight with a large domed 53.8mm spherical sapphire case. In the center of the structure lies a raised central flying tourbillon that is surrounded by two circular aluminum and titanium chapter rings — one each to indicate the hours and the minutes. The movement features  winding rotor with tentacle design, mainspring barrel,  and flying tourbillon  all mounted around a central axis. Energy generated by the rotor at the bottom travels up to the tourbillon regulator via a host of gears that enable the power to transition from level to level. The entire complex movement consists of more than 300 parts and offers 72 hours of power reserve. 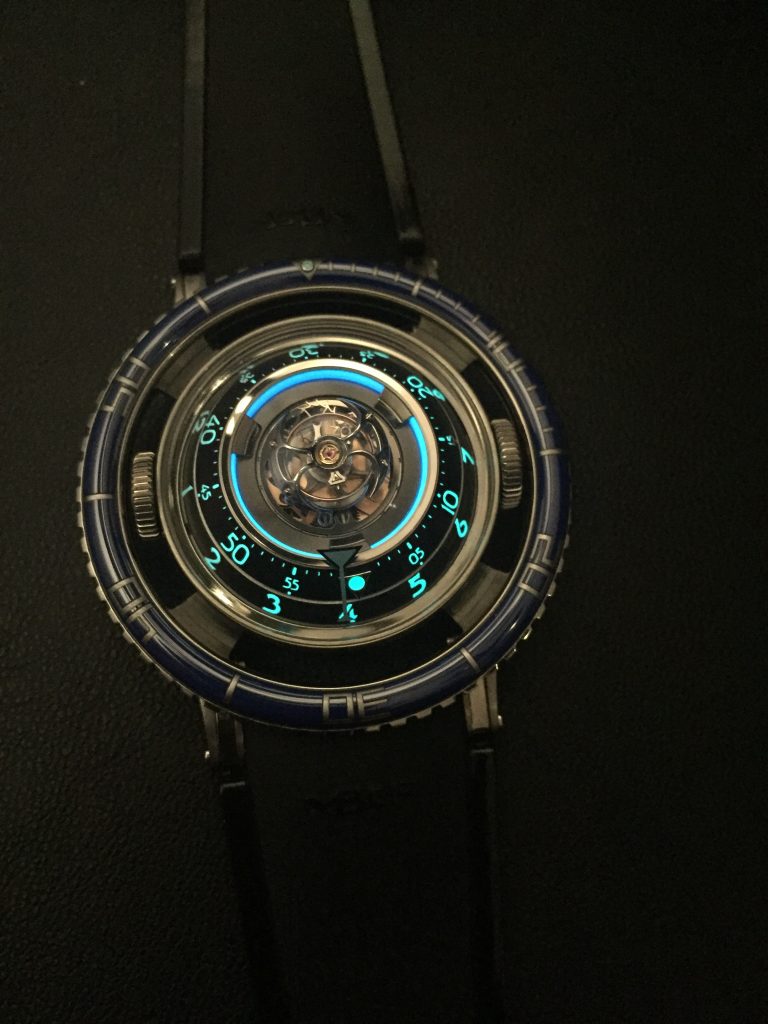 All of this technological apparatus sits within an outer bezel, but is not fixed to the bezel, so that the watch itself actually seems to float within the confines of the space — much like a jellyfish floats in water.  The watch features two crowns, one to set the time and one to wind the movement. The crowns are designed so that they can be accessed easily.

Offering an eery luminescence in the dark (much like the jellyfish), the watch numbers and indices are hand painted with blue Super-LumiNova.  The Ambient Glow Technology used to create the lume is also pained inside the movement, which also glows from within and lights up the flying tourbillon. 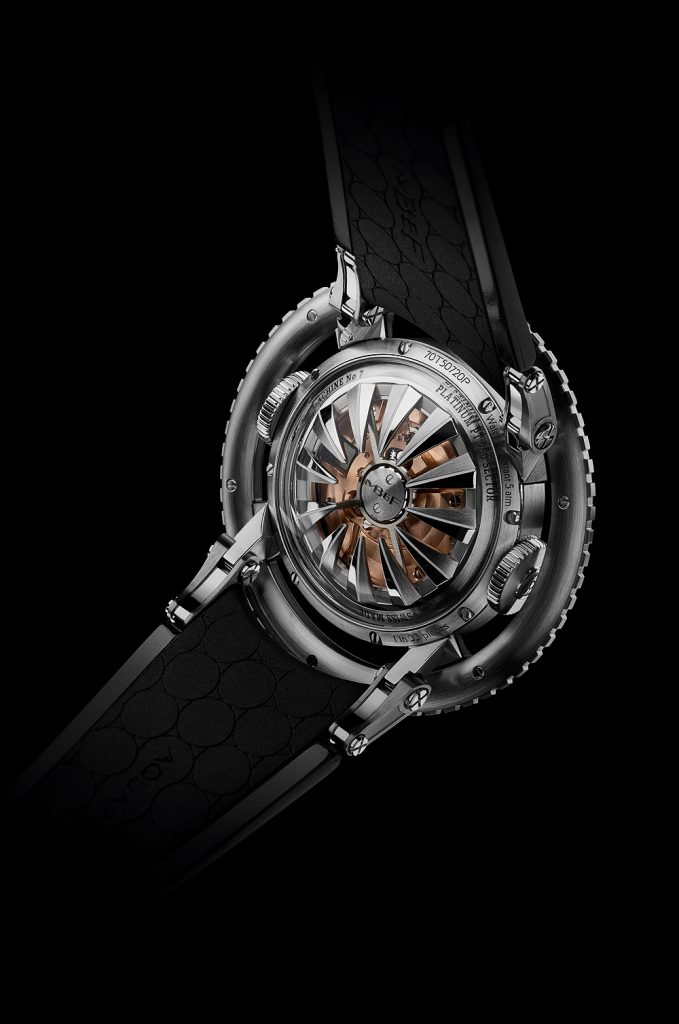 The MB&F HM7 Aquapod features a domed sapphire case with tentacle-designed rotor visible from the case back.

There are two versions of the Jellyfish, one in Grade 5  titanium with an outer unidirectional blue polished ceramic bezel with diving scale. Just 33 pieces will be made of this watch, each retailing for around $100,000. There is also an18-karat rose gold model being made in a limited edition of 66 pieces with a unidirectional black bezel with diving scale. The gold version retails for around $115,000.

Our Impressions of the MB&F HM7 Aquapod

Having spent some time with this watch, there is definitely a good, bad and ugly to it.

The good is easy: the mechanics — like most MB&F watches —  are ingenious and we can’t help but see how the jelly fish inspired the watch.

The bad: I can’t imagine a jellyfish sting being immortalized in a watch and I would like to know how Busser’s wife feels about it. Still, it harkens to the concept of build what you are familiar with. 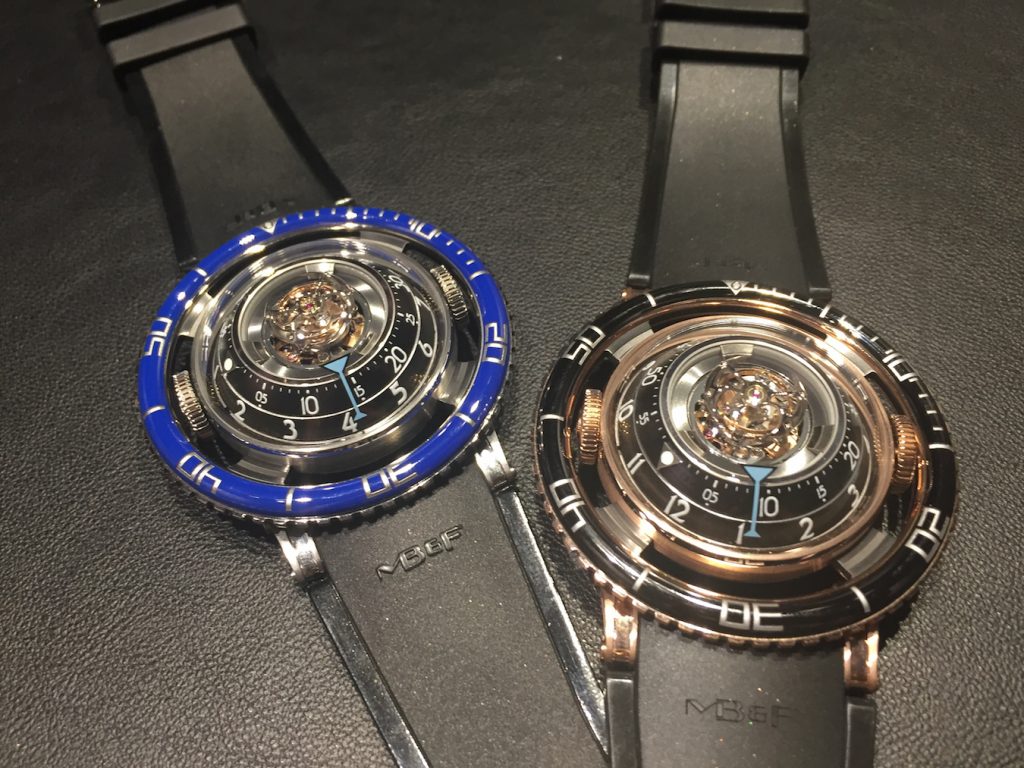 The MB&F HM7 Aquapod case sits within an outer bezel but is not fixed to the bezel, allowing a sort of free float. (Photo: R. Naas)

The ugly: Meant to be a nod to fun, there is a bright blue martini-glass-like marker on the titanium and blue version. It just seems out of place — and trust me — i love a good martini.

The final impression:  One thing that does need to be noted is that the watch is water resistant to just 50 meters and so the concept of having a diving scale on the bezel only harkens back to the water environment of the jelly fish, its inspiration, and not to the dive capacity of the watch because it just is not a dive watch, and MB&F is the first to say so. While this watch has captured everyone’s attention and is definitely a technical marvel, it just was not among my favorites from MB&F. 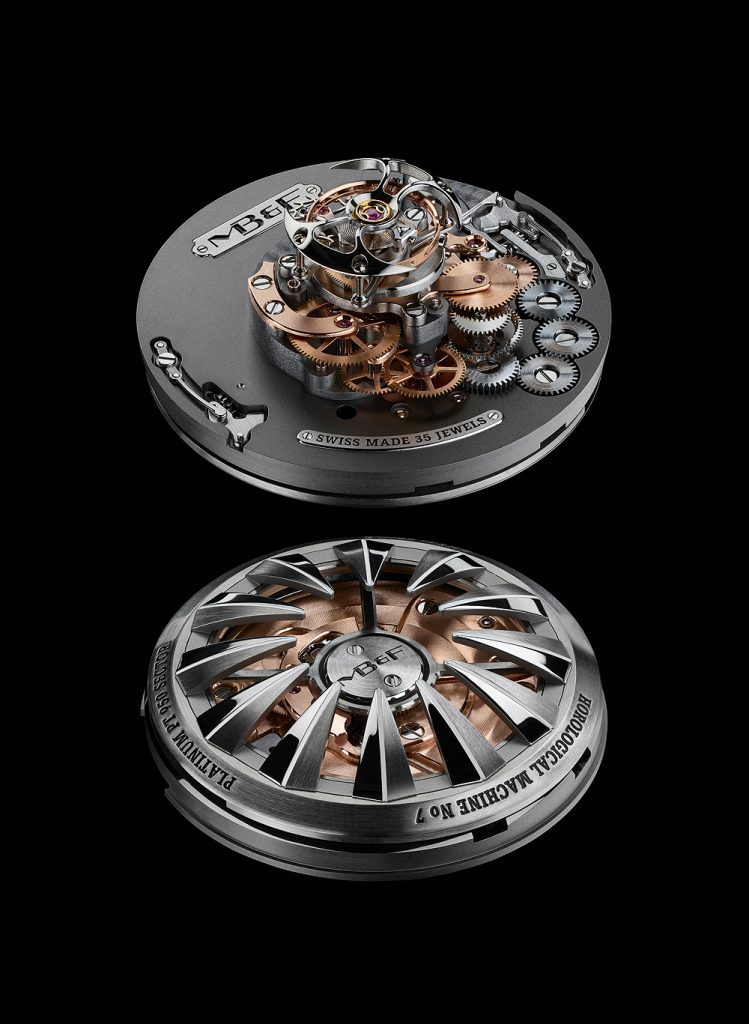 The movement of the MB&F HM7 Aquapod watch consists of 303 parts.