Watch Review: Porsche Design Monobloc Actuator Watch And Enter A Contest For A Chance To Win One 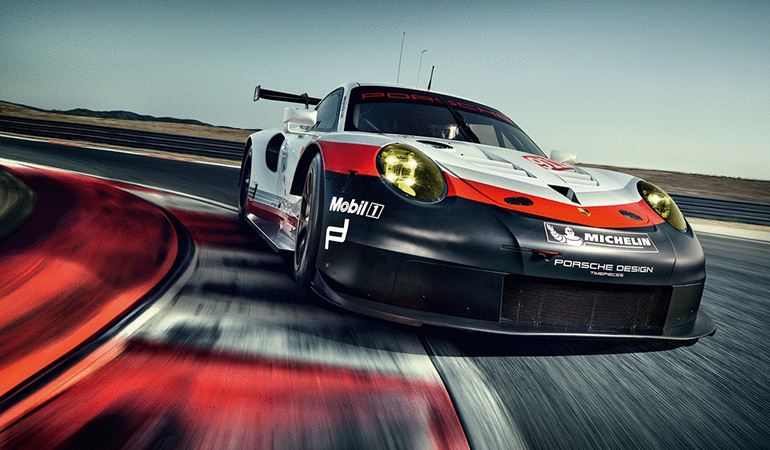 The new Porsche Design Monobloc Actuator was several years in the R&D stages, working alongside the engineers at Porsche.

If you are a race car lover and a watch lover,  read on, because this article is for you. At Baselworld 2017,  Porsche Design unveiled the revolutionary Monobloc Actuator chronograph watch. Here we take a close up look at what makes this watch so special, and bring you news of how you can enter to win a watch now, along with a possible VIP trip to Daytona.

Having been in this industry for more than 30 years, I have had the distinct pleasure of knowing a lot brands when they first became important on the watch market. Porsche Design is one of those brands. The company was founded in 1972 by Ferdinand A. Porsche, and the early watches were made for  by IWC Schaffhausen. Most were made of titanium, a material that was then considered revolutionary in the watch industry. Most were chronographs and all were influenced by the streamlined look indicative of Porsche. Eventually, the company took over its own watchmaking. In fact the timepieces are engineered and designed by Studio F.A. Porsche in Austria and are crafted by Porsche Design Timepieces AG in Switzerland. What’s more,  in the past few years, the brand has been pushing  the limits of creativity — and it pays off with the Monobloc Actuator. 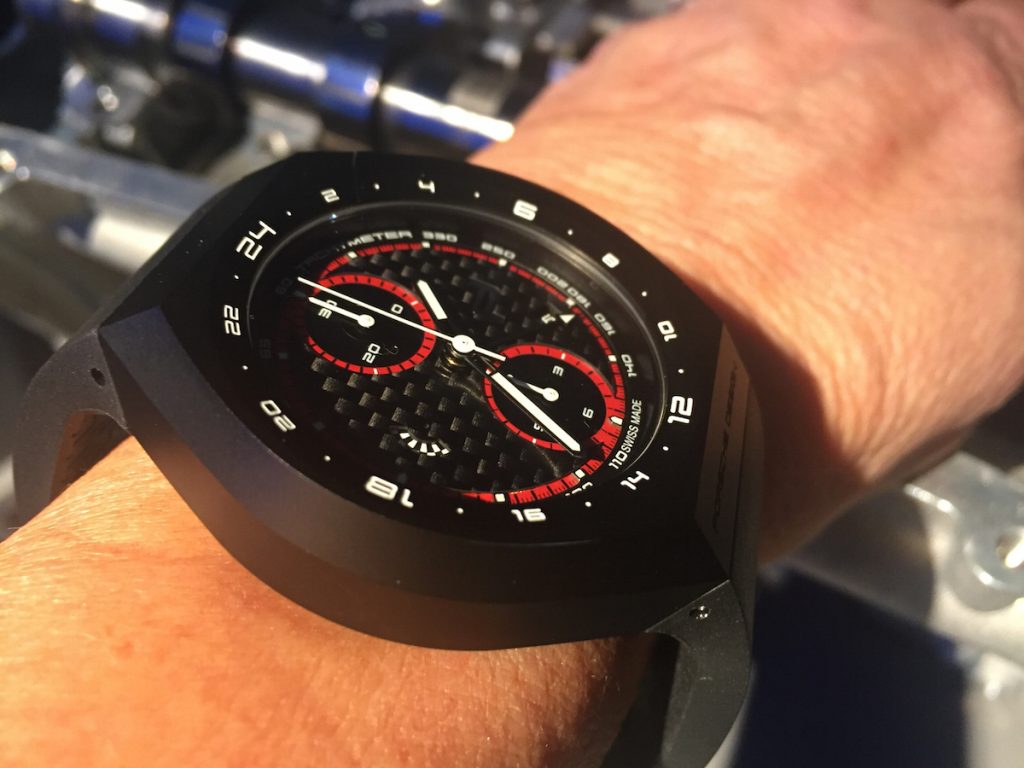 The Porsche Design Monobloc Actuator chronograph is revolutionary in design and technology.

Now, working in tandem with the master engineers at Porsche motorsports, Porsche Deisgn unveisl a new era of chronograph watches with the Monobloc Actuator. Revolutionary in design and technology, the benchmark chronograph, inspired by the brand’s 1980 chronograph, was several yeas in the making, and would not have been possible without the help of the experts at Porsche motorsports. These experts brought their exclusive racing engine technology to the watch design team to develop a system that not only integrates the chronograph pushers into the case side of the watch, but also renders it totally water resistant. The concept makes this chronograph the first to be able to be activated under water.

The goal  for Porsche Design was to  make the chronograph (a watch that measures intervals of time similar to a stopwatch) more resistant to external forces, such as dust, dirt and water, that could get into the mechanism during its use. By utilizing the same gasket-sealing system implemented in the engine of the Porsche 911 RSR, the brand accomplished this goal. 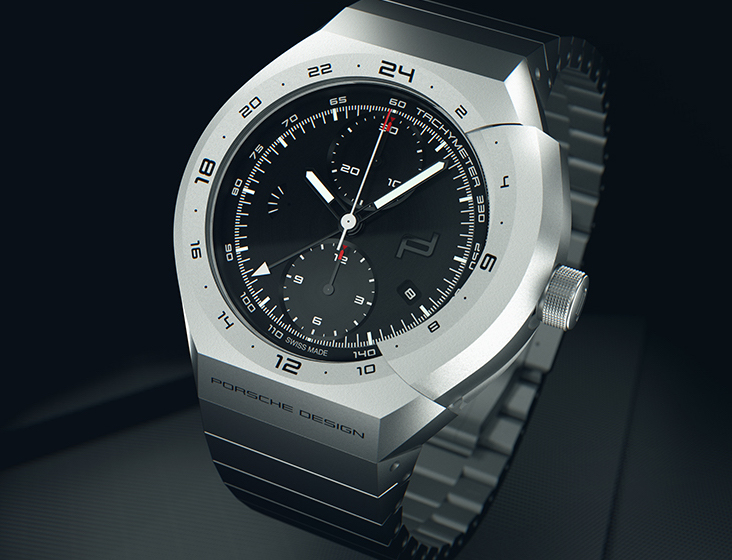 There are several different versions of the Porsche Design Monobloc Actuator.

Before we get into the mechanics of the watch, let’s take a look at what it looks like and what makes it different from  other chronographs on the market in both looks and technology. Typically, a chronograph features a single monopusher or two pushers on the side of the case to operate the tracking of events with a start, stop, and return to zero to start again process. In the Porsche Design Monobloc Actuator watch, the pushbuttons are integrated directly into the case seamlessly forming the right side of the case — with no button protrusions.

The ability to fully integrate the pushers and have them form the case was made possible via a  rocker switch system similar to what is used in the new Porsche 911 RSR engine. Essentially, a rocker sets the functions of start, stop and reset into motion. Additionally, the rocker system is resistant to moisture and water penetration so that the stopwatch function can be used even when underwater, and is pressure resistant to 10 bar (100 meters). This factor alone may be the single most important differentiating factor between the Monobloc Actuator and other chronographs. 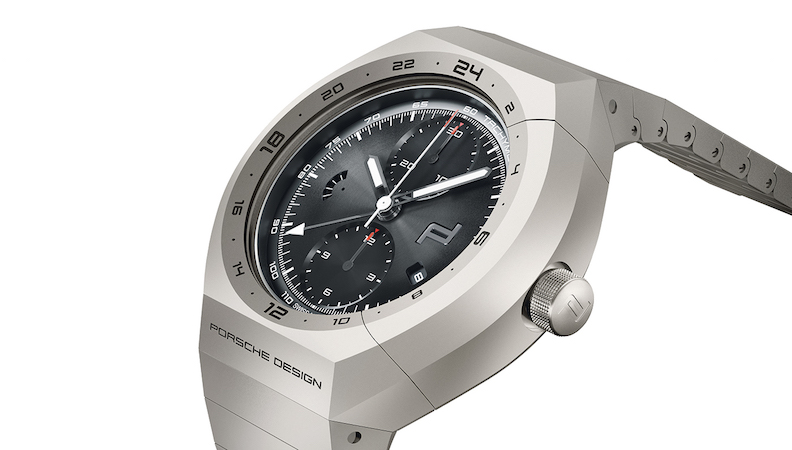 If you look closely at the side of the Porsche Design Monobloc Actuator, you can see the grooves that separate the rocker switch from the rest of the case.

Inspired by the engine of the Porsche 911 RSR, the watch’s  pressure-operated double rocker switch system is built on an automatic ETA Valjoux 7754 caliber. Similar to the way a car’s camshaft works to transmit power, the rocker switch – when activated by pushing on the case side —swings into the center of the movement. As the rocker swings in,  it makes contact with tappets, or levers, that transfer the pressure to the chronograph levers and gears. The tappets are protected by high-performance insulators to assure a perfect seal as they transfer the power to the chronograph cam. That insulation renders thew watch water and dust resistant, making the chronograph function useable under water.

To enable full engagement of the chronograph function, each time the rocker switch is activated – by pushing on the case side above the crown for start/stop, and below the crown for reset –  it  glides forward into the case to make contact with the movement. As it glides inward,  a portion of the rocker moves slightly across (beneath) the sapphire crystal. To prevent damage to the  crystal, Porsche Design applies an extremely hard coating to the sapphire crystal before adding seven anti-reflective treatments. 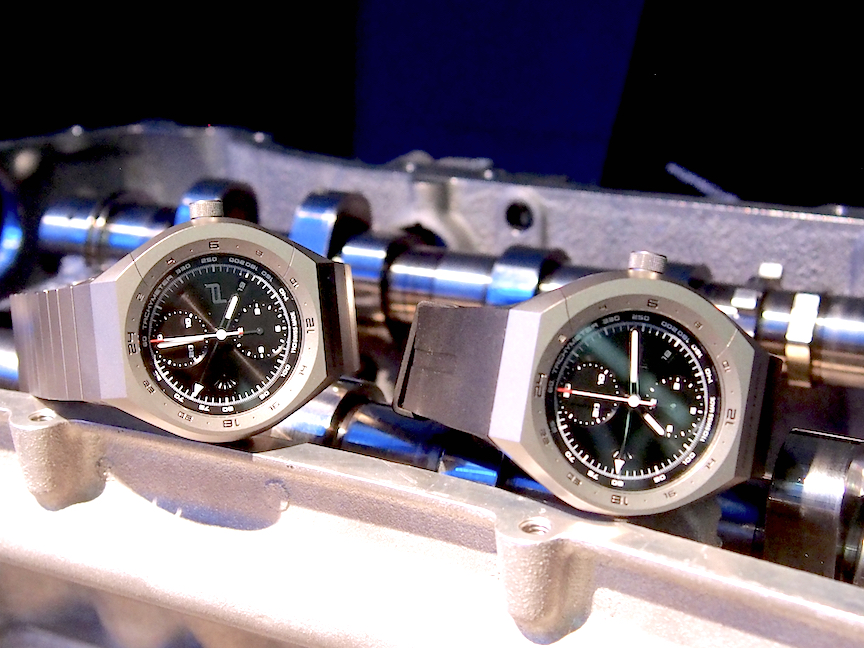 The chronograph function of the Porsche Design Monobloc Actuator cane activated under water. The watch also offers GMT and more.

In all,  the technological concept is ingenious  and the look of the watch is clean and chic thanks to the integration of the rockers instead of pushers. Additionally, you can use the chronograph functions under water, which is pretty cool. At 45.5mm, the Monobloc Actuator is the perfect size for any wrist and there are no pushers to interfere with comfort.

The  Monobloc Actuator chronograph also features 24-hour GMT function, and has a tachymeter scale on the outer ring of the dial. It is being offered in several versions built of titanium with a carbide coating.  Dial colors include matte black or dark blue sunburst, and it is sold  with either a titanium bracelet( $6,850) or a rubber strap ($6,350). My preference is for the rubber strap because it has a much sportier appeal, but that is a personal choice. 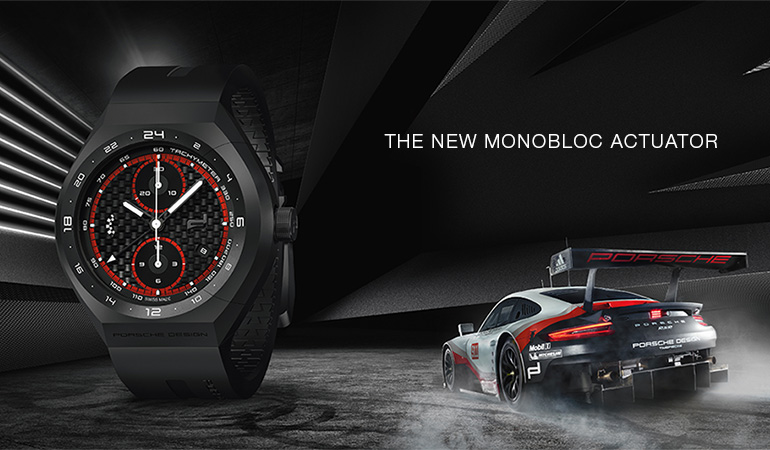 The Porsche Design contest lets you win one of four Monobloc Actuator chronographs.

Because the design of this watch was inspired by the high-performance engine of the Porsch 911 RSR engine, the brand is offering several different potential wins in its new contest. Those who enter could win the Monobloc Actuator Limited Edition watch, and maybe a VIP trip to the 24 Hours of Daytona in 2018.

According to the contest, “Every tenth of a second counts.” You can Guess the fastest lap time of the new Porsche 911 RSR at the 24 Hours of Le Mans and win one of four exclusive Porsche Design Limited Edition Timepieces. At the season finale, the closest guess will also win an unforgettable VIP trip to the 24 Hours of Daytona in 2018. Visit Porsche-Design to enter.

The Porsche Design contest lets you guess the speed of the new Porsche 911RSR to 1/10th of a second.