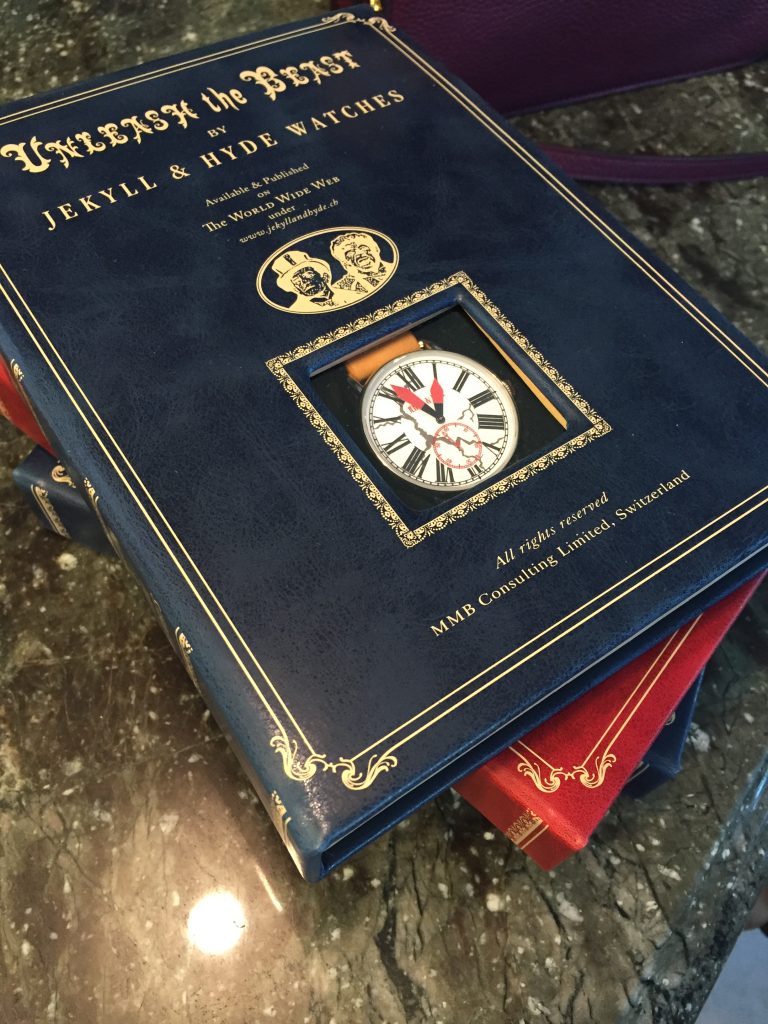 Jekyll & Hyde Watches are inspired by the famed novel of the same name by Robert-Louis Stevenson. (Photo: R. Naas/ATimelyPerspective)

I doubt there is anyone who doesn’t know the story by famed author Robert Louis Stevenson: The strange case of Dr. Jekyll & Mr. Hyde. It features scientist Dr. Jekyll, who, in his laboratory, develops a potion that he hopes will separate this good side from his sinister side. Unfortunately, the experiment goes wrong and his evil side – Mr. Hyde – takes over. Now, we have a watch brand that embraces the dual personality concept of the famed book – and does so intriguingly. Introducing Jekyll and Hyde Watches that let you “Unleash the Beast” (the brand’s tag line). 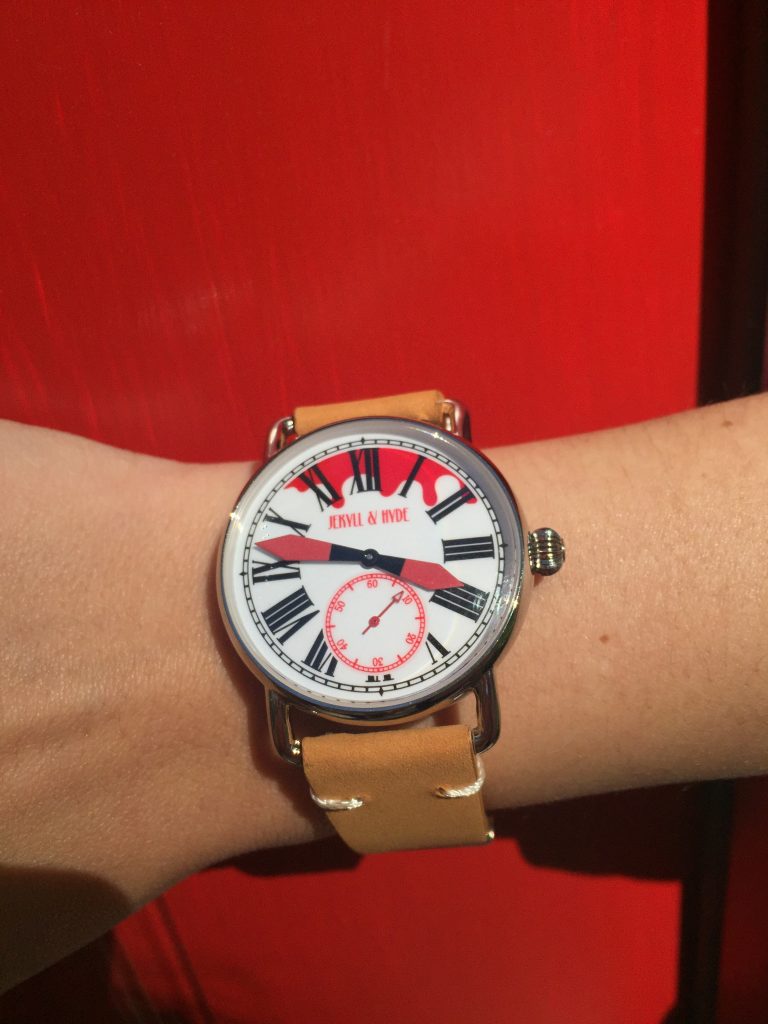 My favorite Jekyll & Hyde Watch is the “Bloody” model, as it best embraces the concept of the brand.(Photo: R. Naas/ATimelyPerspective)

With watch cases and dials inspired by the Victorian era Pocket watches (the era during which the book was set), Jekyll & Hyde watches are – well – a bit different. Depending on the model, we see blood dripping from the top of the dial, or webbed designs that emulate cracked cases. The less forthright versions feature half-and-half dials with one half black and the other white; some models even feature red and white numerals all on the same dial. The bold red (or blue or yellow depending on the model) hands are a subtle reminder of the duality of our personalities.

All of the Jekyll & Hyde watches are sold with two straps: one vintage-like leather and the other black nylon (or, depending on the model, red, yellow or blue straps). I found the vintage leather a bit too stiff and large for my wrist and I wasn’t fond of the color combination of saddle-colored leather with all the black, white and red of the dials. However, once I changed it out and wore the black fabric strap – it transformed the watch and I fell in love with it. 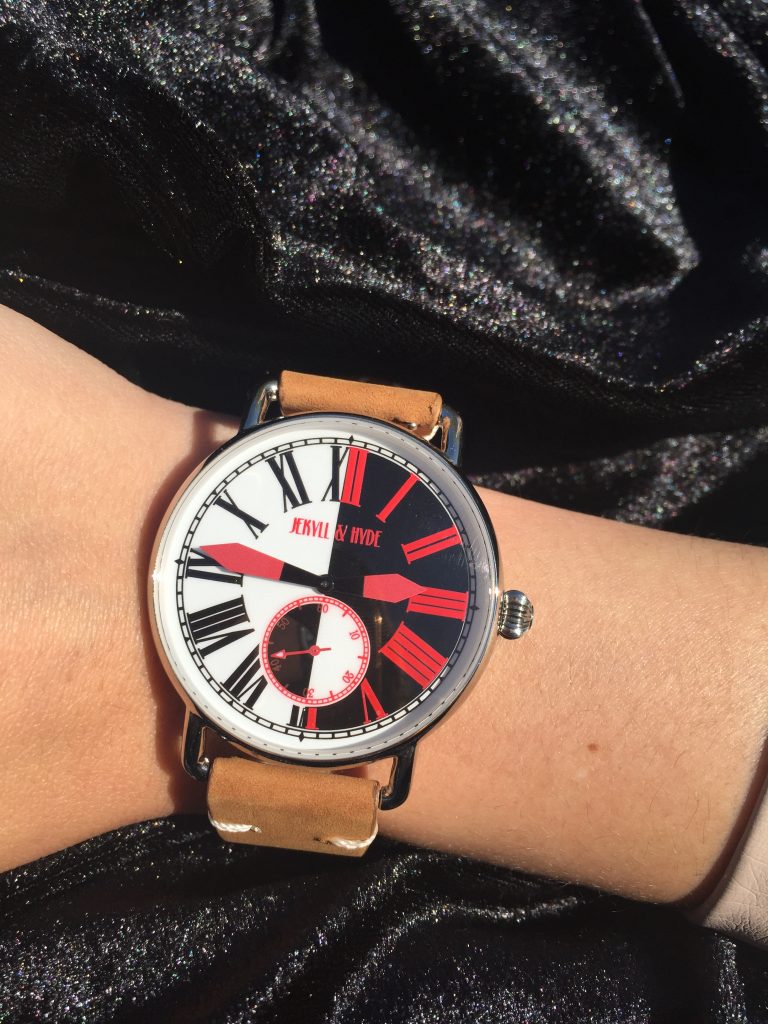 The Dual Character Jekyll & Hyde watch is sort of like wearing a secret on your wrist because only you know the story behind it. (photo:ATimelyPerspective)

All of the watches are offered with either a black or white dial background and with either Arabic or Roman numerals. Additioanlly, all models aer offered in a highly wearable 39mm size and in a not-overpowering 42mm size — all in stainless steel.

The models include “Unleashed” – after the brand’s tag line – a two-hands watch with seconds subdial at 6:00. This line is the one that also offers blue hands or yellow hands and that is perhaps the most “classical” of the watches. It was my least favorite because it didn’t embrace the concept of Jekyll & Hyde strongly enough for me. If I am going to wear something named for good vs. evil, I want to see a little more than just contrasting colors on the dial.

For this reason, the “Dual Character” watch was more to my tastes, as were the “Cracked” and “Bloody” models. The Dual Character line is a subtle play on duality and features a dial that is vertically split down the middle with one have in black with red numerals and the other half in white with black numerals. Again offered in both 29 and 42 mm, this watch is very wearable and you feel like you have a secret on your wrist because only you know the true meaning of the split-colored dial.

Also subtle in its message, the “Cracked” model features a dial with a cracked motif across the 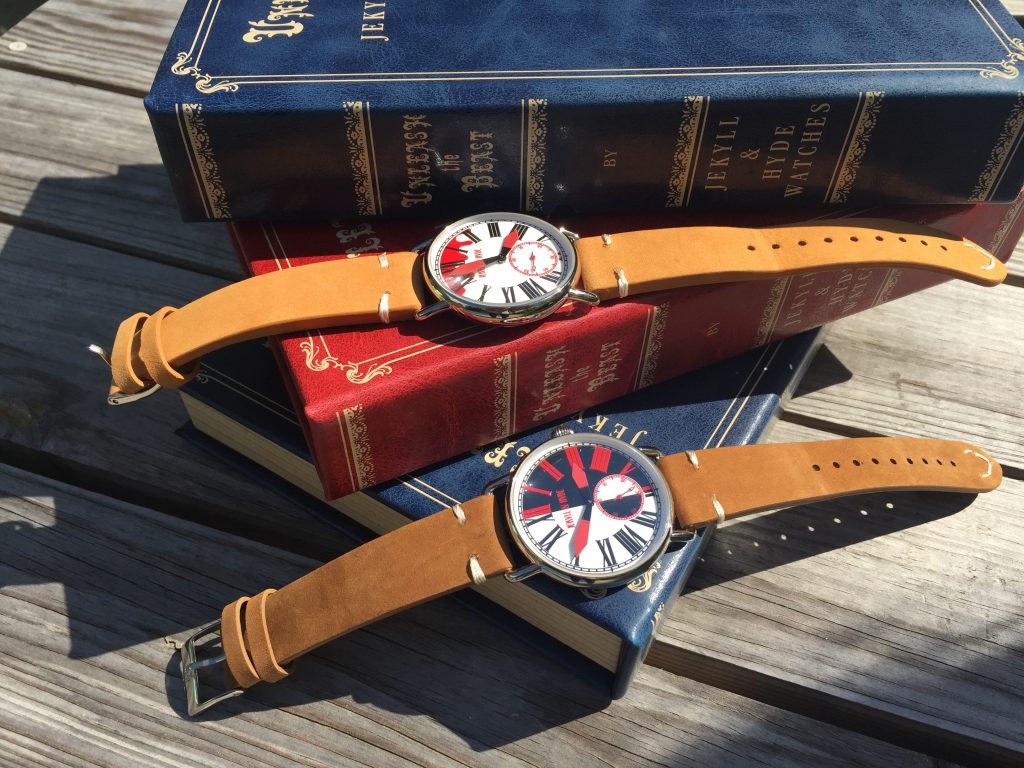 The packaging for the Jekyll & Hyde Watches is a vintage-like book that opens to reveal the watch, the extra strap and the story on parchment paper pages. (Photo: ATimelyPerspective)

dial almost in lightning-bolt fashion. It could resemble a spider’s web and so has an eerie side to it. Again, it is offered in both sizes, with black or white dial, and with either Roman or Arabic numerals.

My favorite, though, is the “Bloody” watch. While this version comes with black or white dial, I loved the white dial version the best. It is absolutely easy to see what is going on. At the top of the dial, red oozes onto the dial from the case in a blood-smattered pattern. It is juxtapositioned with the red seconds subdial at 6:00 and works beautifully with the red-tipped hands. I prefer the Roman numerals to the Arabic numerals because it feels more Victorian. 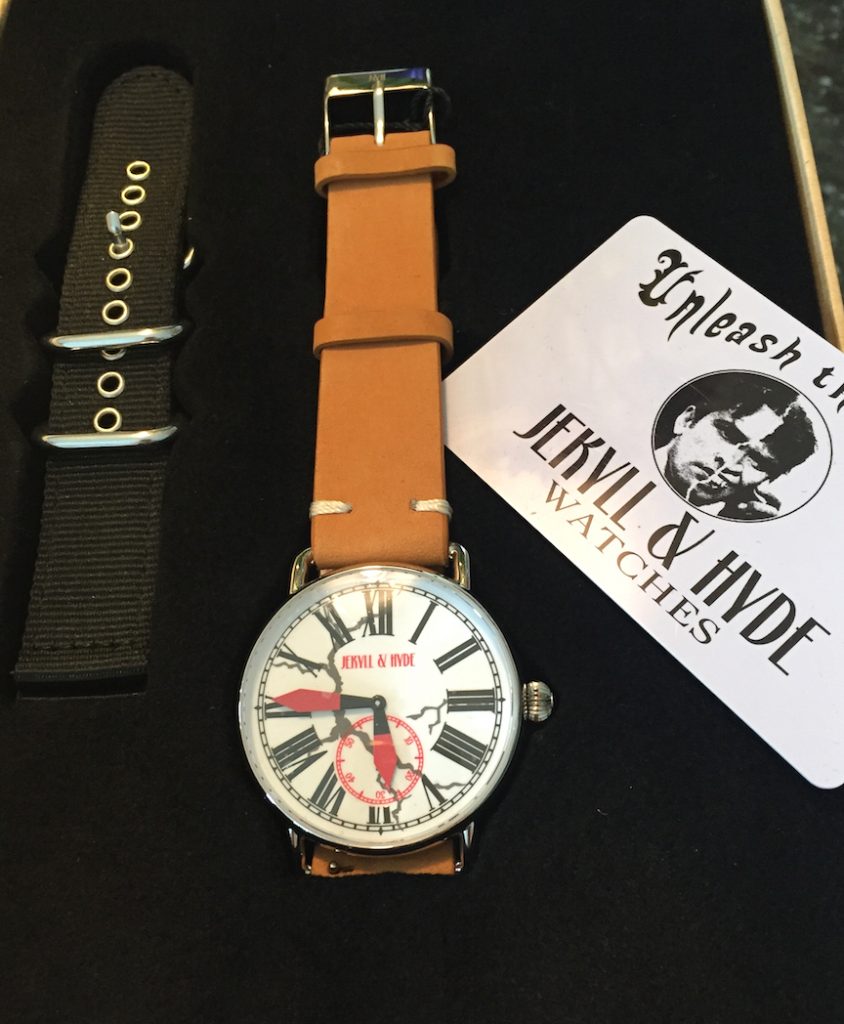 Each Jekyll & Hyde watch is sold with a 100 percent refund guaranteed. (Photo: ATimelyPerspective)

Even the packaging for the Jekyll & Hyde watches is superb. Each watch comes in a vintage-styled book that opens to reveal the story of Jekyll & Hyde and about the brand and the watches. Each comes with a certificate of authenticity. Best yet is the retail price: $276, and all have a 100 percent return policy. Extra straps can be purchased for $25 for leather and $20 for a variety of colored nylon straps. The watches are powered by a quartz movement.

The brand is the brainchild of long-time watch veteran, Marc Bernhardt. Also involved, is his other half — his watch-veteran sister Marcia Mazzochi. There is a third partner, Trenton A. Carroll who also brings his perspective to the lab table.

Remember, we are not talking high horology here. We are talking affordable, expressive watches that retail for under $300 so that unleashing the beast becomes fun – especially at certain times of the year or when we are in certain moods. Besides, if you are a literary lover of the story, you just can’t pass this one by. 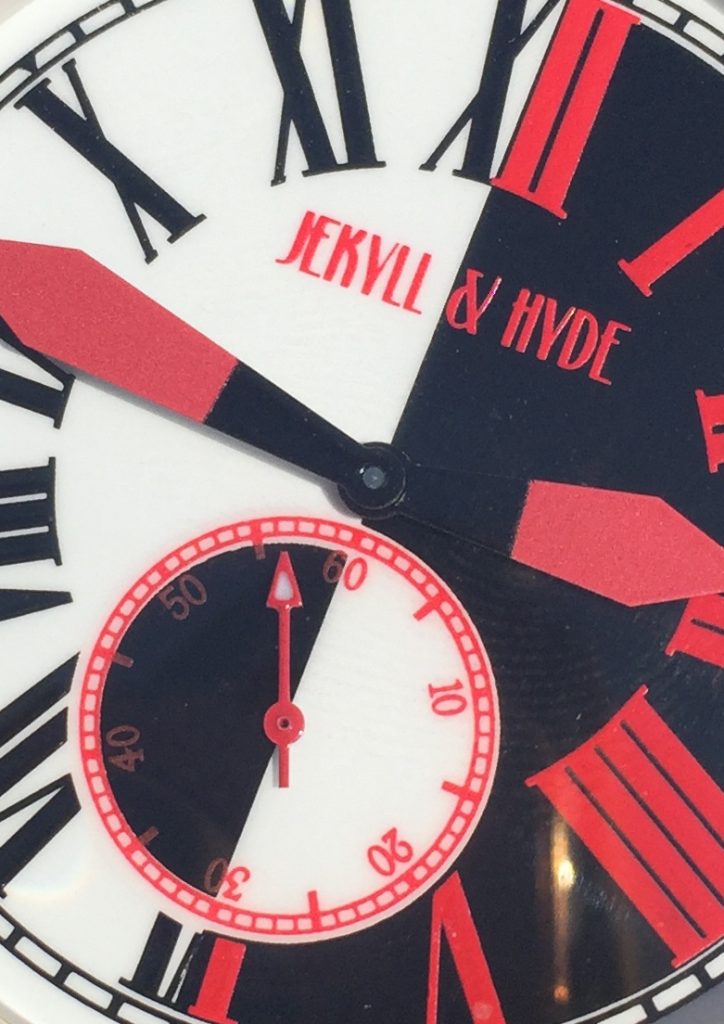 All of the Jekyll & Hyde watches retail for an affordable $276.