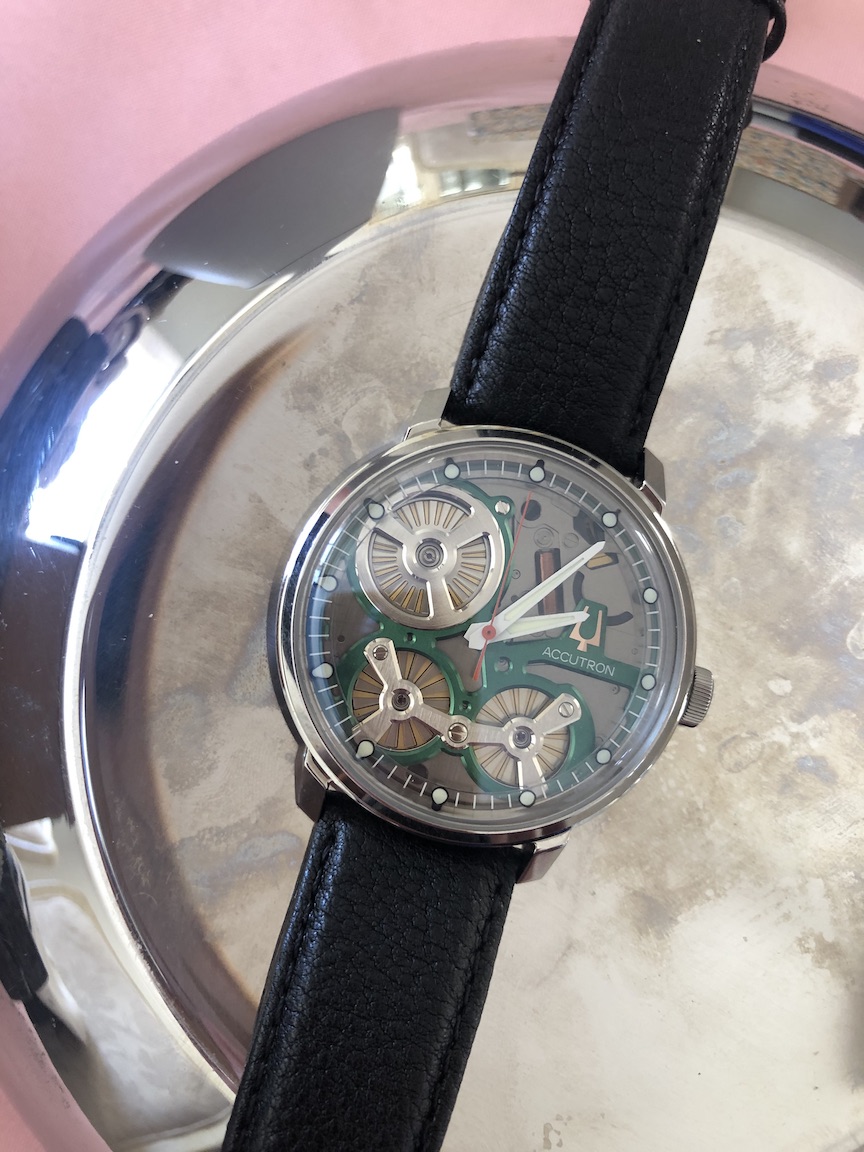 Just last year, Accutron celebrated its 60th anniversary. Once a sub-sect of Bulova, the Accutron has spun out on its own now. And the newest collection of watches has a lot to offer. Recently, we went hands-on with the Accutron Spaceview with new electrostatic movement that was 10 years in the making. It was a real treat to wear this watch that not only recalls the tuning fork watch invented in 1960, but also pushes the envelope of innovation now and for the future.

First thoughts
The Spaceview I wore is the one I think real die-hard watch collectors will want. It recalls the original Spaceview from 1960. Because the tuning fork movement of the time was so revolutionary, Bulova made a prototype watch without a dial so that the jewelers and the salespeople could see how the movement worked. It was a training tool of sorts and the intention was to put a dial on the watches for sale. However, everybody loved the open-worked look and didn’t want a dial. So, the Spaceview was born in its open format. The new model with the super cool, always-in-motion electrostatic movement is, as Accutron says, “not a timepiece; It’s a conversation piece.” 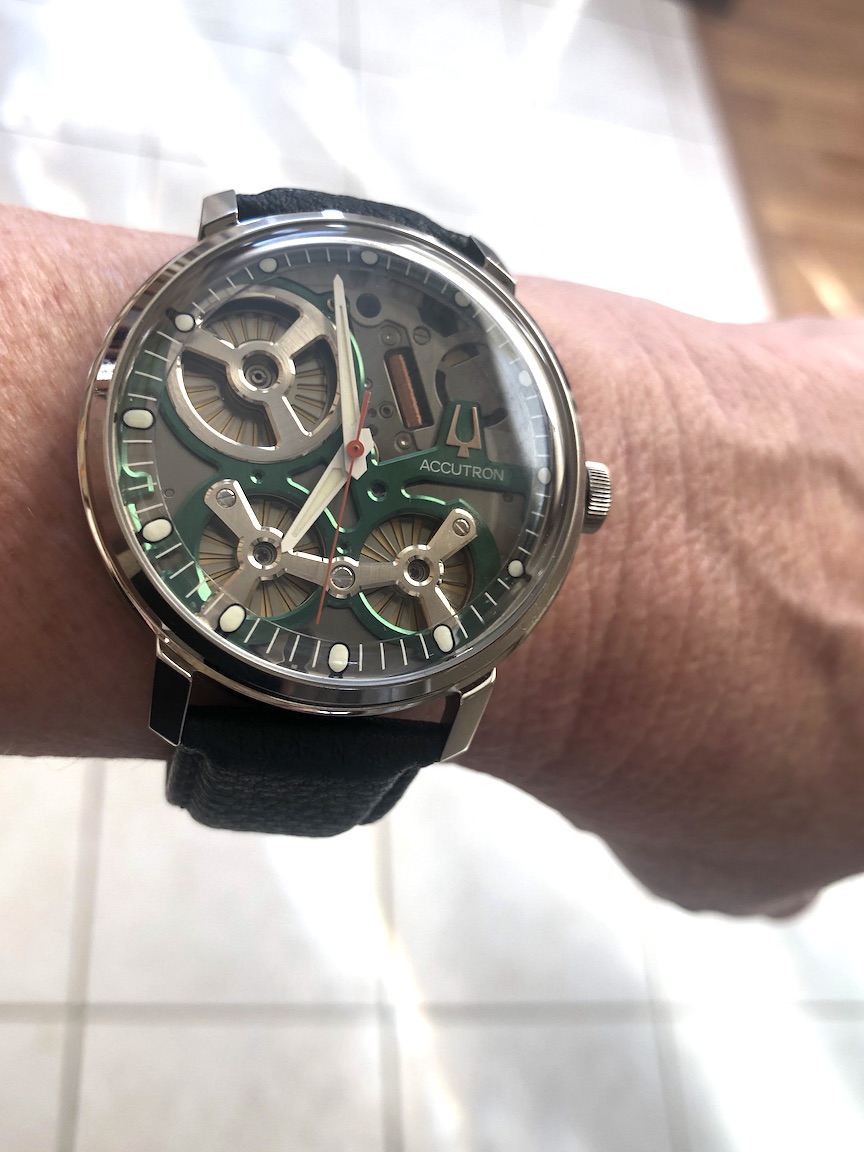 Accutron Spaceview watch with electrostatic energy movement. The version I wore retails for $3,450.

Electrostatic Movement
Parts of the new electrostatic energy movement inside the Spaceview are visible on the dial side, including three turbines. There is a larger one in the upper left of the dial that generates the initial charge, while the two smaller ones store the energy. The more the wearer moves, the more energy will be stored in the turbines. However, even if you put it in a drawer and not touch it, if you pull the crown out first, you put the watch into full energy storage mode and will still have 100 percent of the power saved when you pick it up again in a couple of years (yes, years). 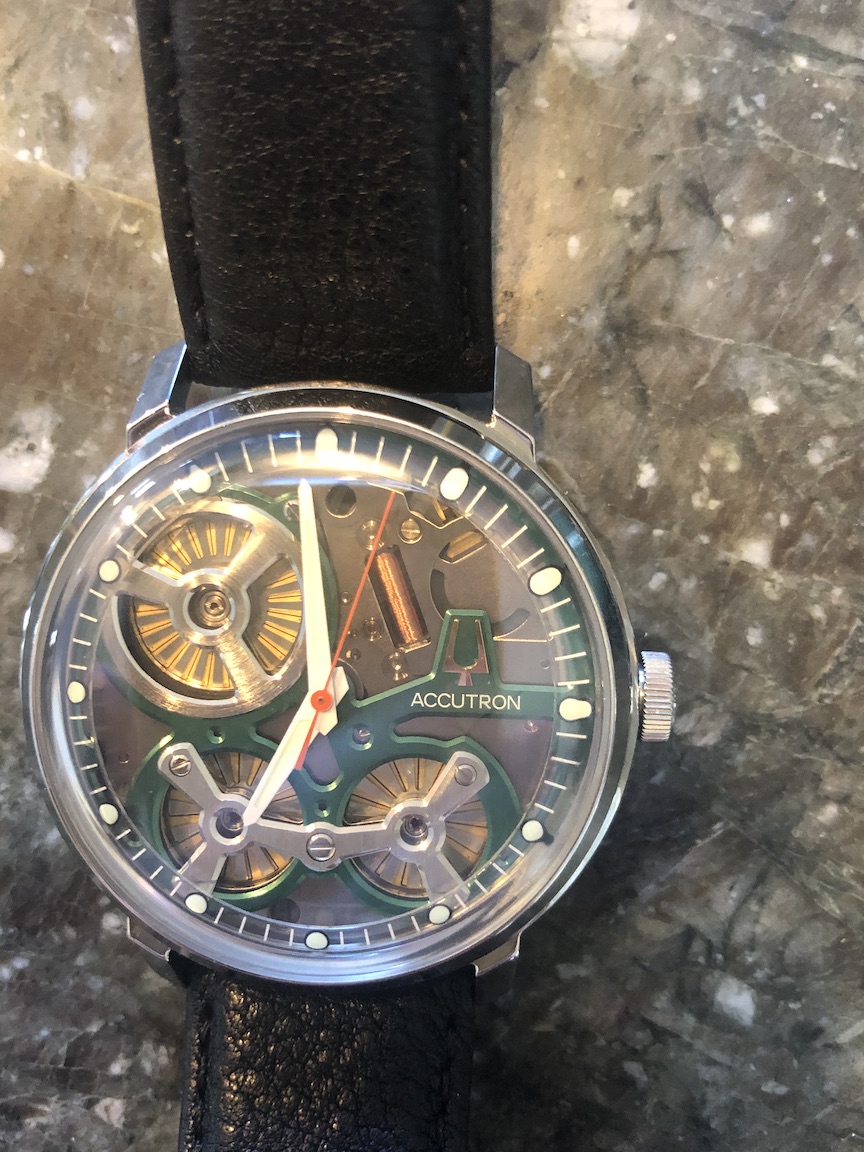 The groundbreaking power savings is incredibly efficient in terms of its use of energy, and Accutron says the movement can go as long as nine years without needing any charge or service. The new electrostatic movement is being used in several Spaceview watches, including the 43mm stainless steel version that I wore for a few weeks and that retails for $3,450. There is also a solid 18-karat gold version for $19,600, of which just 60 pieces will be made, and a sportier version with bright green chapter ring with the white markers on it ($4,000). 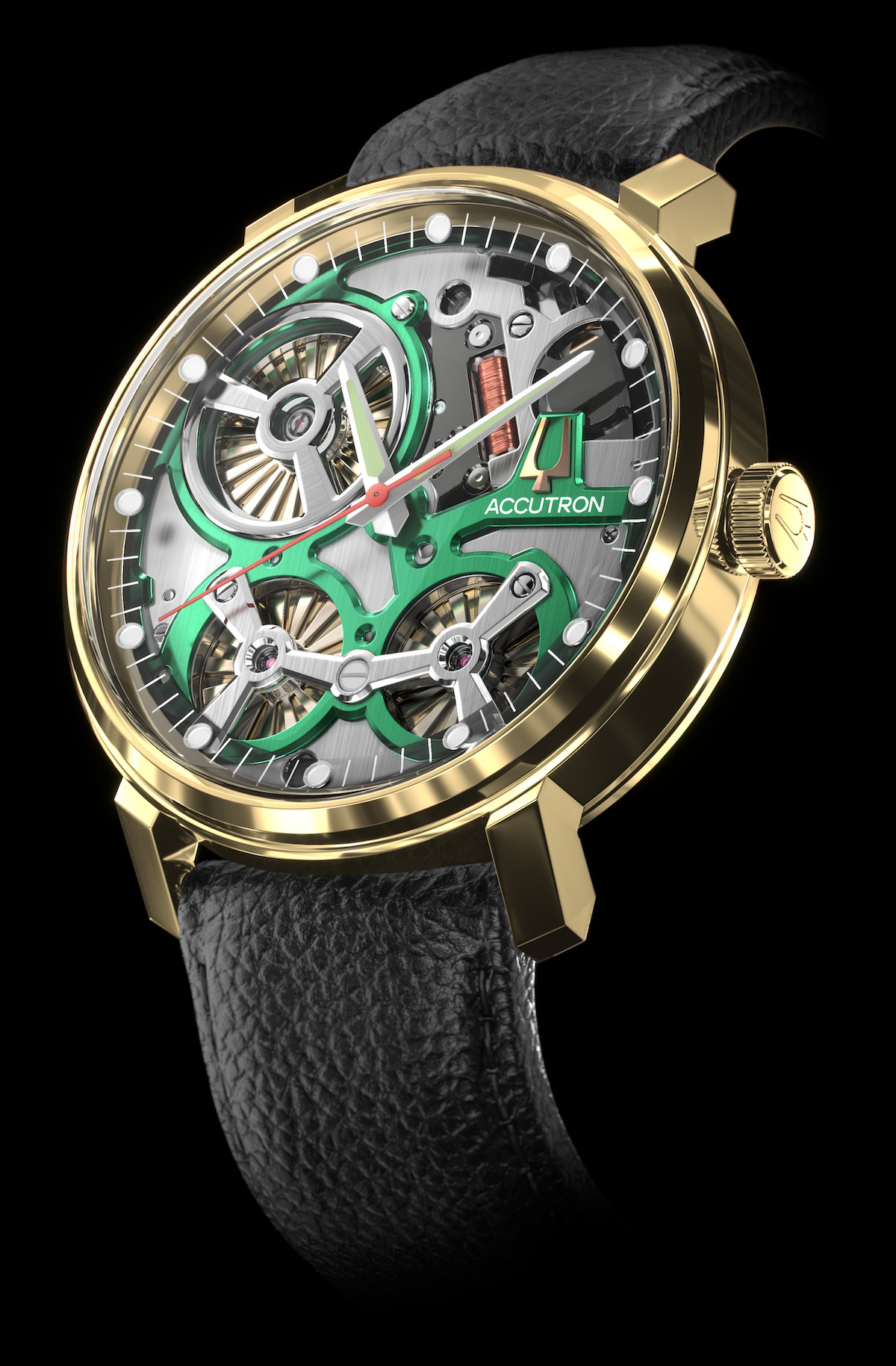 The 18-karat gold version of the Accutron Spaceview watch is created in a limited edition of 60 pieces for $19,600.

This is watch that turns heads. It is a piece that you don’t just glance at, you stare at it. The visual impact of the open-worked movement with three turbines and signature green accents is at once both space-age and futuristic. The three-hand watch with proprietary electrostatic energy movement is crafted in stainless steel with a domed sapphire crystal (which makes photographing the watch incredibly difficult). Water resistant to 50 meters, the watch boasts a bright orange seconds hand that stops after five seconds of inactivity, yet the watch continues to keep accurate and precise time.

Even though the case measures 43.5mm, I didn’t feel like it was too big on me. In fact, I liked the larger size because it gave me great viewing of the turbines and the copper elements. It is a fun watch to wear yet it boasts a serious movement – making it a watch with a real story. 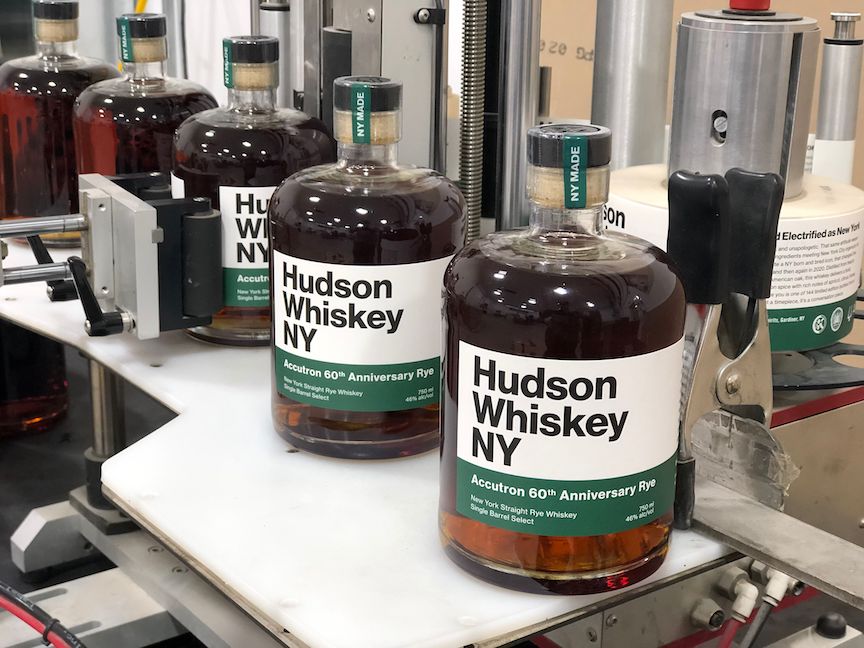 Because Accutron was celebrating its 60th anniversary, it wanted to form some genuine partnerships that would also appeal to its watch collecting audience in America. These are on-going partnerships that help broaden the scope of the audience for all of the brands involved.

Because Accutron was a part of Bulova, once an American brand that operated out of New York, and because the companies are now headquartered in the Empire State Building, Accutron wanted to form partnerships wherein the New York vibe would ring with authenticity. 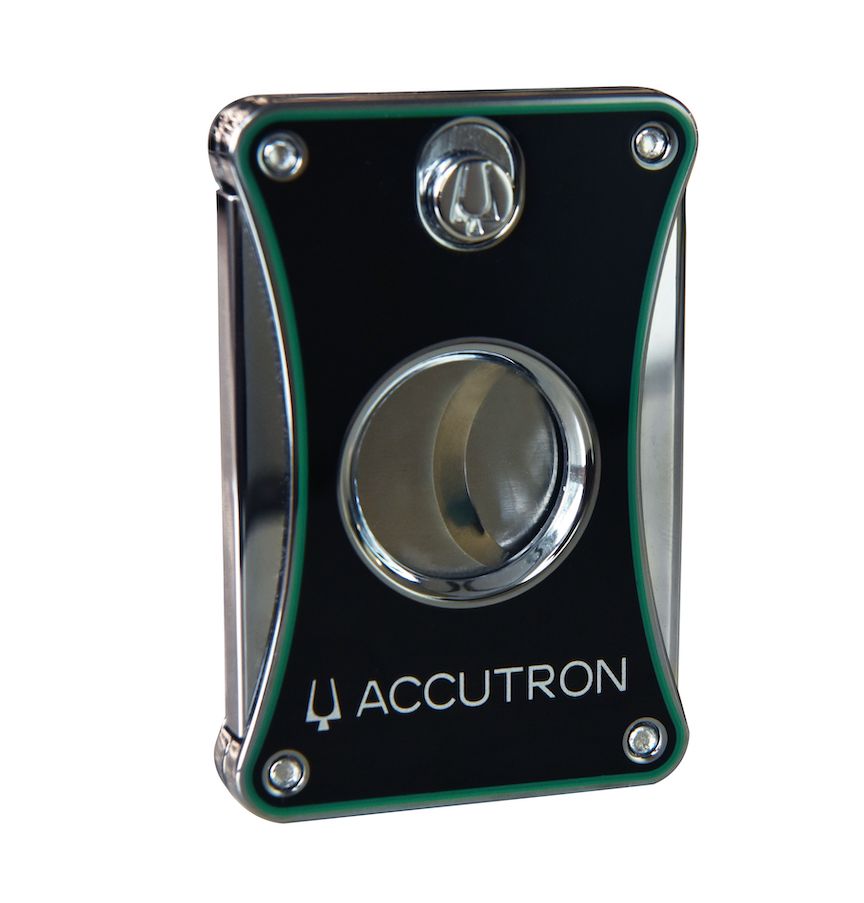 The brand teamed with La Palina Cigars to create a bright Accutron green double-diamond cigar cutter that will never dull because it sharpens itself every time it cuts, a cigar case and even cigars. It then teamed with Hudson Whiskey for some fine American whiskey, bourbon and rye, as well as with Esterbrook Pens. In all, the Accutron collection this year is sure to excite connoisseurs in all walks of life. 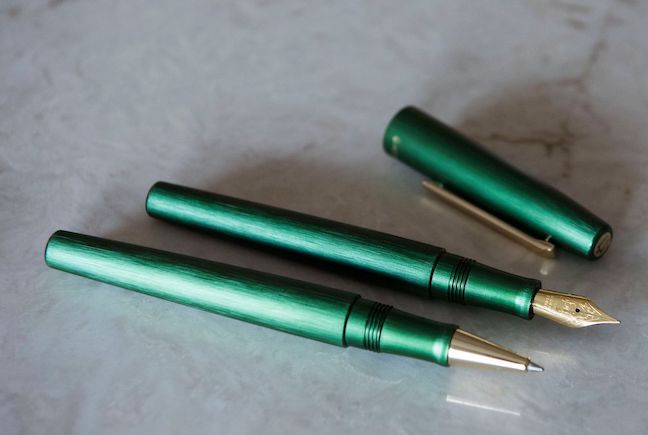