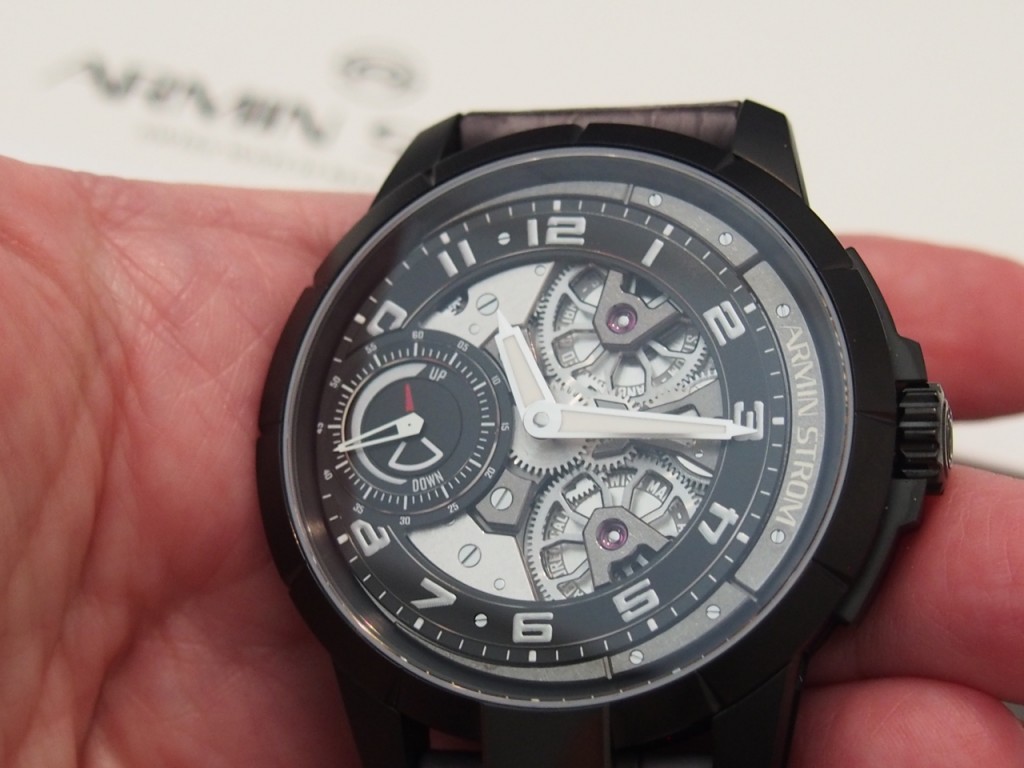 At this year’s Basel world Armin Strom unveiled its latest release, the Armin Strom Double Barrel Edge. With a PVD black case, larger size and bold skeletonization, the latest release will lure watch buyers looking for a bold and evocative statement on their wrists.

The main story with the Edge Double Barrel is its striking visual cues. Powered by the Armin Strom caliber Arm16, the movement features a number of geometric patterns and angular components. 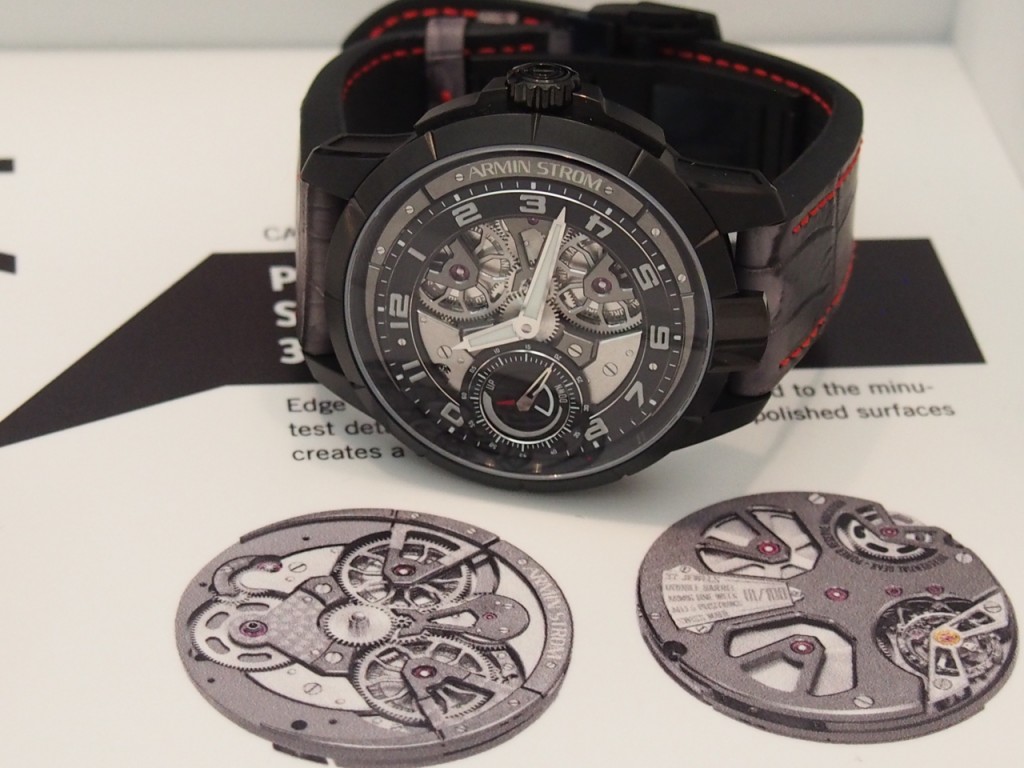 The new skeletonized caliber of The Edge Double Barrel has angular components for a bold appeal (photo: C:R.Naas,ATimelyPerspective)

The dial of the watch features spider shaped crown wheels, large Arabic numerals and a 60-second register with power reserve indicator at the 9 o’clock position. The power indicator is extremely useful as the manually wound watch offers a hefty 8 days of power reserve thanks to the double barrel design. The double barrel complication serves two purposes, first is to streamline the power distribution over the life of the wound piece. Generally, when fully wound, the mainspring has a lot of force and towards the end not so much. The double barrel design helps smooth the transition and spreads the power distribution over two smaller mainsprings. The second purpose is the extended power reserve mentioned earlier. The two barrels are viewable through angular cutouts on the back of the watch, as well as through the dial side opening of the watch. 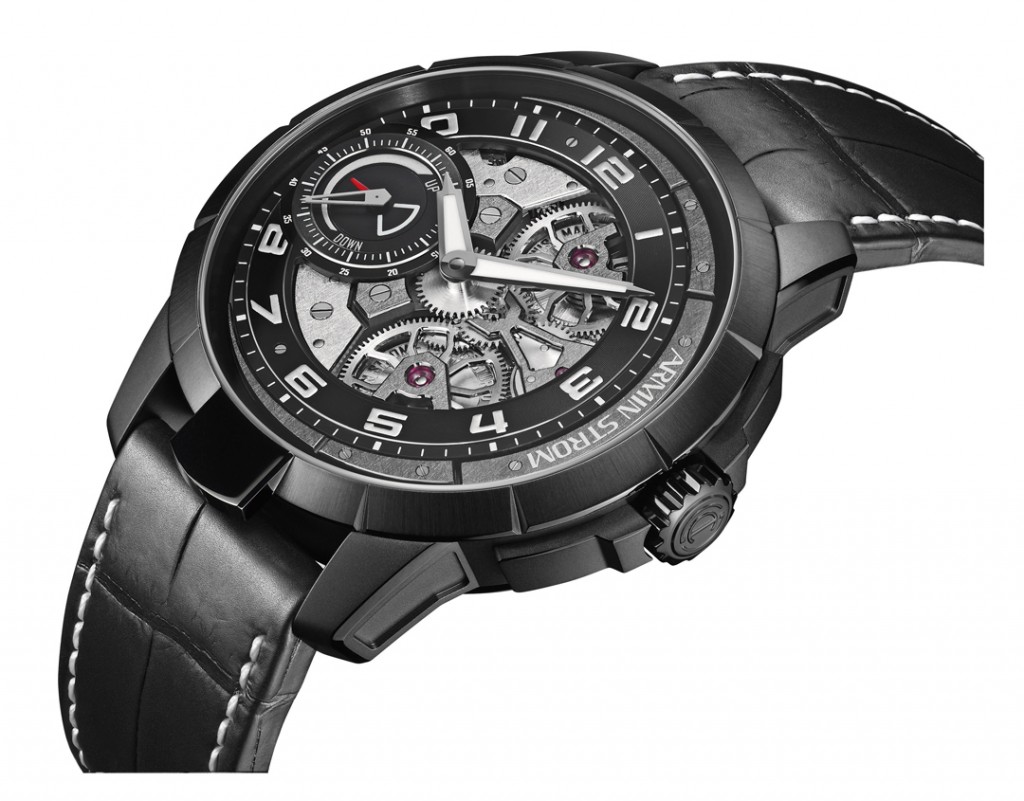 To add to the industrial feel of the piece, a cross-grinding decoration has been added to the hand-beveled bridges. The movement is composed of 194 components and 34 jewels. Large polished steel hands display the hours and minutes with white markers indicating the gradation between minutes. The robust case size at 46.80mm adds to the presence on the wrist. Only 100 pieces will be produced and each will retail for about $27,000. If you aren’t one of the lucky 100, stay tuned, another new Edge Double Barrel is on the horizons and we will be bringing you news of that one in June. 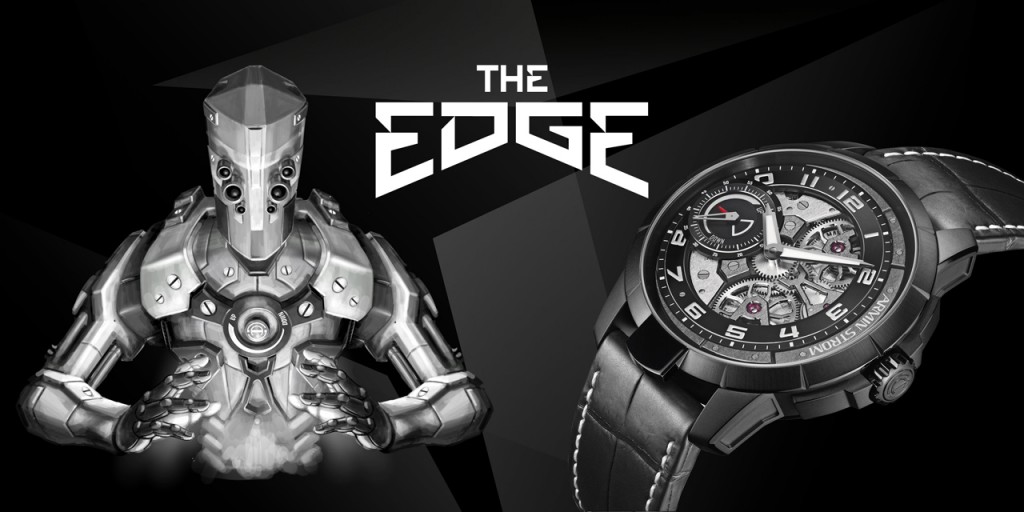 Introducing The Vacheron Constantin Year Of The Rabbit Watch
April 25, 2016

Introducing the Piaget Year Of The Rabbit Watch
April 25, 2016