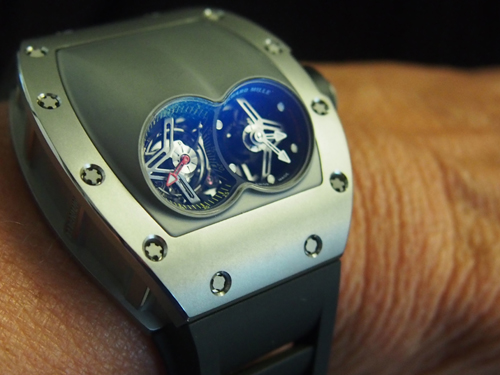 Yesterday we had the chance to get up close with the very unique Richard Mille RM053 Tourbillon Pablo Mac Donough – the watch made specifically for one of the world’s top polo players.

For those who know Richard Mille and his sports affiliations – you know that his sport “friends” actually wear their watches while playing. For this reason, each watch is specially conceived. In the case of the Pablo Mac Donough watch, it was crafted so the famed  Argentinean polo player can wear it in this toughest of sports.  For this watch, Richard Mille designed the case to tolerate extreme shocks. The “armored” case is crafted in titanium carbide, with two raised arcs leading to two viewing windows. 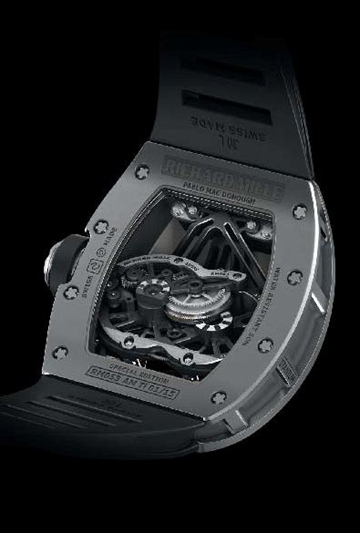 The elaborate movement is crafted primarily of titanium

The movement design and windows are tilted at a 30˚ angle. The seconds run with the tourbillon cage on the left viewing window, while the hours and minutes are shown on the right. The highly compact, totally new tourbillon movement utilizes a highly skeletonized base plate and bridges of microblasted titanium with a compact going train-winding barrel arrangement. Since the movement itself is ultra light it is less susceptible to the centrifugal forces generated during a game.

Created in a limited edition of just 15 pieces this watch is actually quite cool on the wrist — with sort of a space-age feel to it. But, if interested, it may help to know that in order to secure one of the 15 pieces, you may have to sell your mansion. The watch retails for $620,000.