Ulysse Nardin Unveils ‘Freak Me Out’ Campaign For Freak Vision 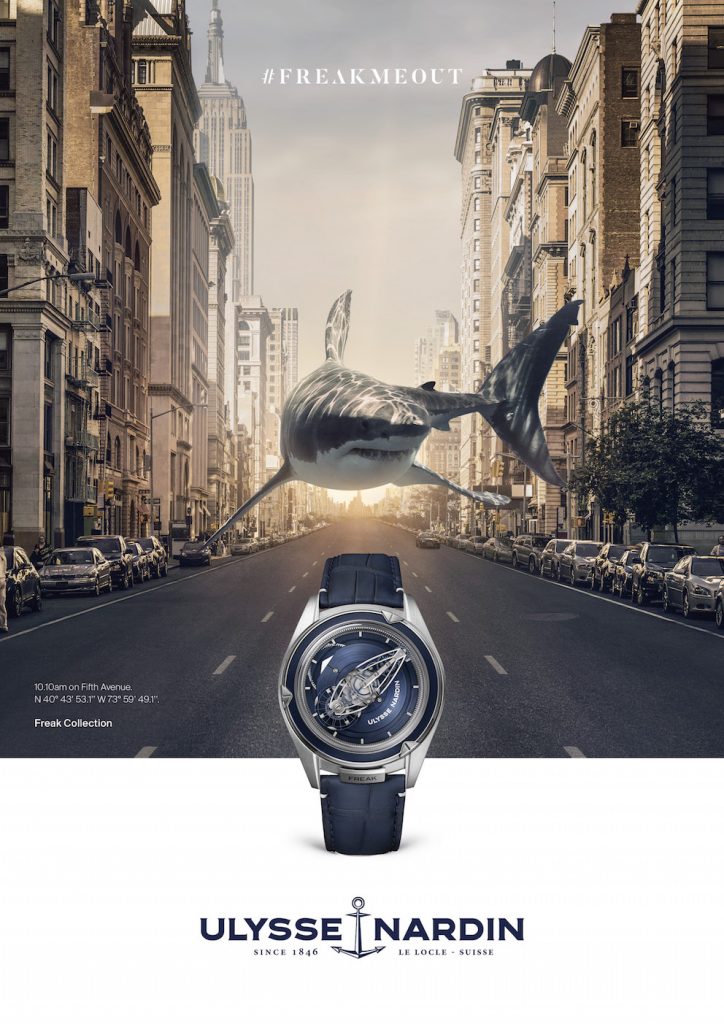 It’s here. The all-new Ulysse Nardin  #Freakmeout ad campaign for digital and print makes its appearance this month worldwide. We recently wrote about the new campaign on our Perfect Timing column on Forbes.com. Now we bring you a close-up look at the wild and wonderful cutting-edge campaign that has sharks swimming through Manhattan and more.

“Much like the brand’s exceptional watches, the visuals for this campaign are arresting. Each ad depicts the Ulysse Nardin Freak Vision watch, which is quite unusual in its architecture and method of indicating time. The watch is an inset in the bottom third of the ad, while the main portion of the ad depicts a big city scene, either New York or Shanghai, as the backdrop. In the foreground: a Great White shark swimming through the city — a startling shock. 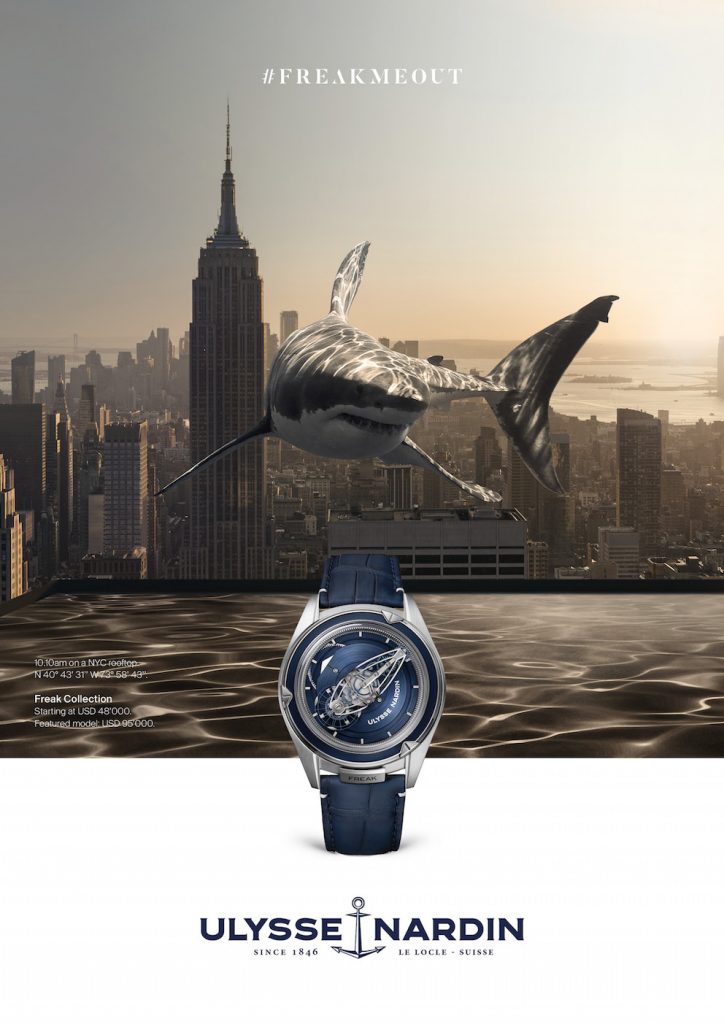 Sharks where they don’t belong … in the Ulysse Nardin “FrekMeOut campaign for the Freak Vision watch.

In fact, this is exactly the message Pruniaux wants to convey: the brand, with 170 years of marine heritage, continues to swim against the tide. In a private interview, Pruniaux states that the message is a twist, it pays homage to the dynamic spirit of the brand, and to its marine roots, but in a relevant and different manner than most other watch ad campaigns on the market. With the added hash tag #Freakmeout, the message is that Ulysse Nardin is all about surprise.

“It has been my goal to go more in depth with our communications and to create a stimulating conversation with consumers,” says Pruniaux. “This campaign is cool and different, with a clear message behind it that says we do things with a twist. Also, the shark is dynamic and powerful, and so are our watches.” 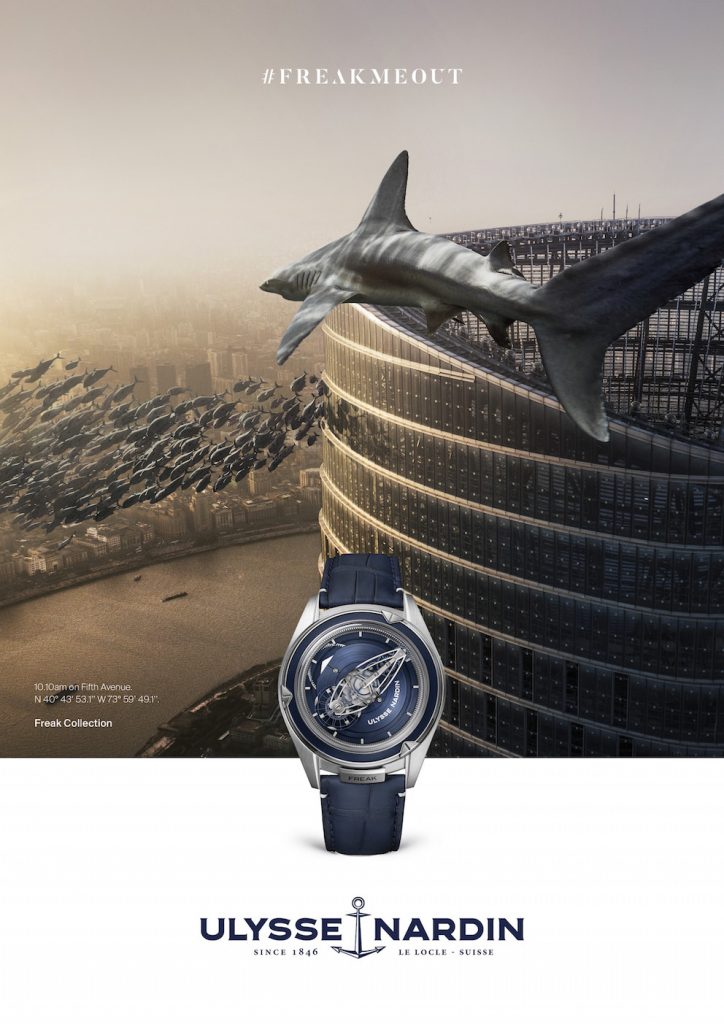 Pruniaux says the brand, along with Paris-based agency Extreme that created the campaign, chose the Great White shark not only because Ulysse Nardin has a long history of using the shark as an emblem in its marine lines, but also because it is a “vulnerable” species, almost endangered, and the ad can bring light to that by placing the shark outside of its natural environment.

According to Pruniaux, the shark is designed to remind readers or viewers of the brand’s marine heritage, but also of the brand’s commitment to being different. Additionally, because the shark is always in motion, the added message is that time doesn’t stand still and you can’t wait for change, you have to make it happen.

With its long history of marine watches, Ulysse Nardin is committed to preserving the world’s oceans, and has even partnered with a free diver Fred Buyle who is an environmentalist who tags sharks for observation. That is another story soon to come. 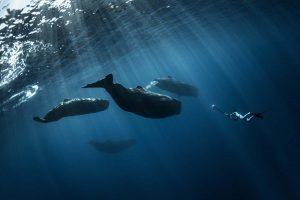 This new campaign is not the first surprising aspect Pruniaux has brought to the Swiss watch brand. In January, he established a huge ocean-inspired exhibition booth at the Salon International de la Haute Horlogerie (SIHH) in Geneva. The room was the color blue to emulate the new dive watch, the marine atmosphere and the Freak Vision in blue. Damien Hirst sculptures were on display and the ceiling was designed to look like the surface of the ocean. Not only was the underwater-like experience “freaky,” but also it was also very immersive.

“I like to call it the battle between the blue and the red,” says Pruniaux. The blue owned 90 percent of the real estate and the red only 10 percent, but there was great balance of the messages. The blue was all about who we are – our heritage and watchmaking prowess —  but the red was the twist. It was fun and a good thing to do to drive conversations about the brand.”

This creative thinking and direction by Pruniaux has people in the industry talking about what he has up his sleeve for later in the year. Chances are, it’s something with a twist.”