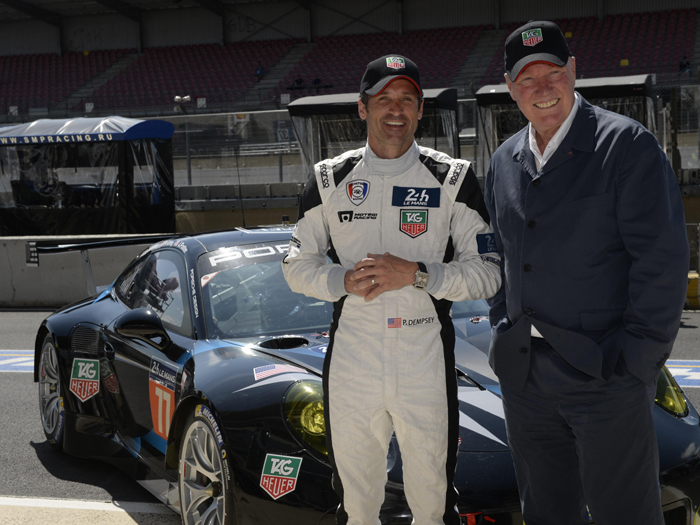 Earlier today we brought you the story of Patrick Dempsey and Dempsey Racing teaming with Porsche Design to create a new timepiece (you can read that here). Now, it turns out (could he be fickle?) that he has also teamed with TAG Heuer to make history at Le Mans. Indeed, TAG Heuer and Dempsey Racing signed a long-term partnership this past weekend during the 24 Hours of Le Mans. More than 40 years after Steve McQueen starred in the race classic Le Mans with a Monaco chronograph on his wrist, the asphalt once again belongs to TAG Heuer and Hollywood.

TAG Heuer opts to enter the prestigious endurance race world in support of Dempsey Racing, which – in partnership with Proton Competition – is competing in this year’s race with team drivers Patrick Dempsey, Joe Foster and Patrick Long.  As we mentioned in the earlier post today, Dempsey, a Grey’s Anatomy leading man and popular Hollywood actor, is also a top-tier international sports car racing driver and team owner. TAG Heuer will promote the team’s achievements in its new advertising campaign, and its iconic shield will be visible on the car and the drivers’ racing suits in every race. So, what does this mean for Porsche Design ? We are still investigating, but it is an interesting turn of events.