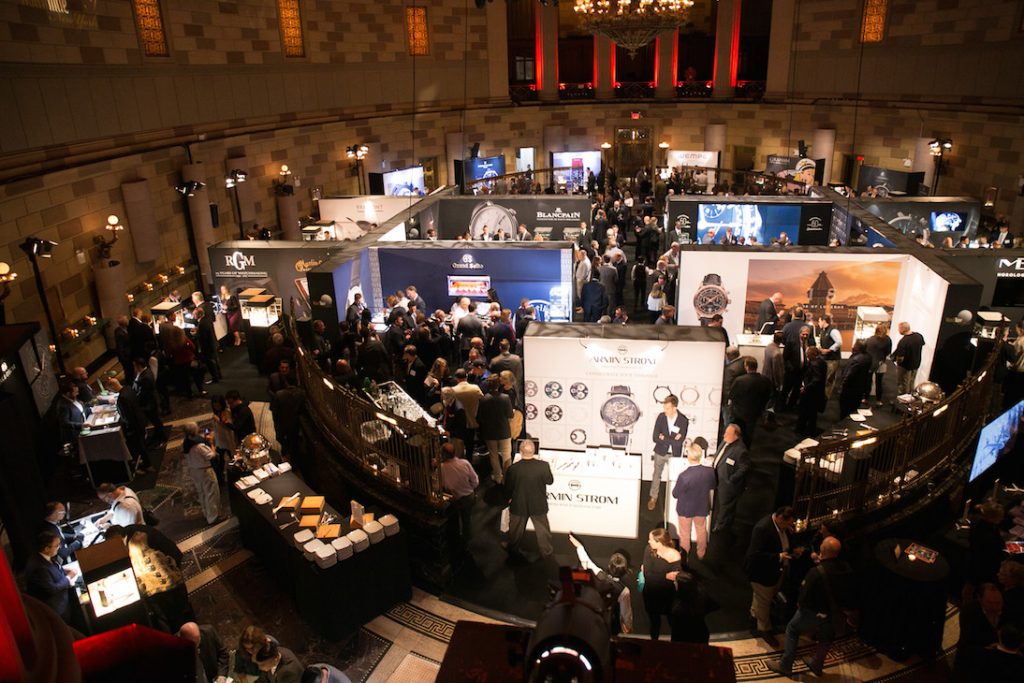 Just last week, the third annual WatchTime New York (2017) show was held at the magnificent Gotham Hall in midtown Manhattan. With more than 30 brands exhibiting watches – many of which had not yet been seen in the United States market– the day-and-a-half show attracted more than 1,200 watch lovers and collectors. This significant show in America is geared for the public rather than the retail trade and has continually gained in stature and attendance.

The event opened on a Friday at 5:30 pm with a working cocktail party and with most of the US brand executives – and many Swiss executives – on hand to meet the collectors and talk about their brands and products throughout the three-hour event. For some of the smaller independent brands, the watchmakers, founders or CEOs were also present, including Kari Voutilainen, Romain Gauthier, Roland Murphy of RGM, among others. 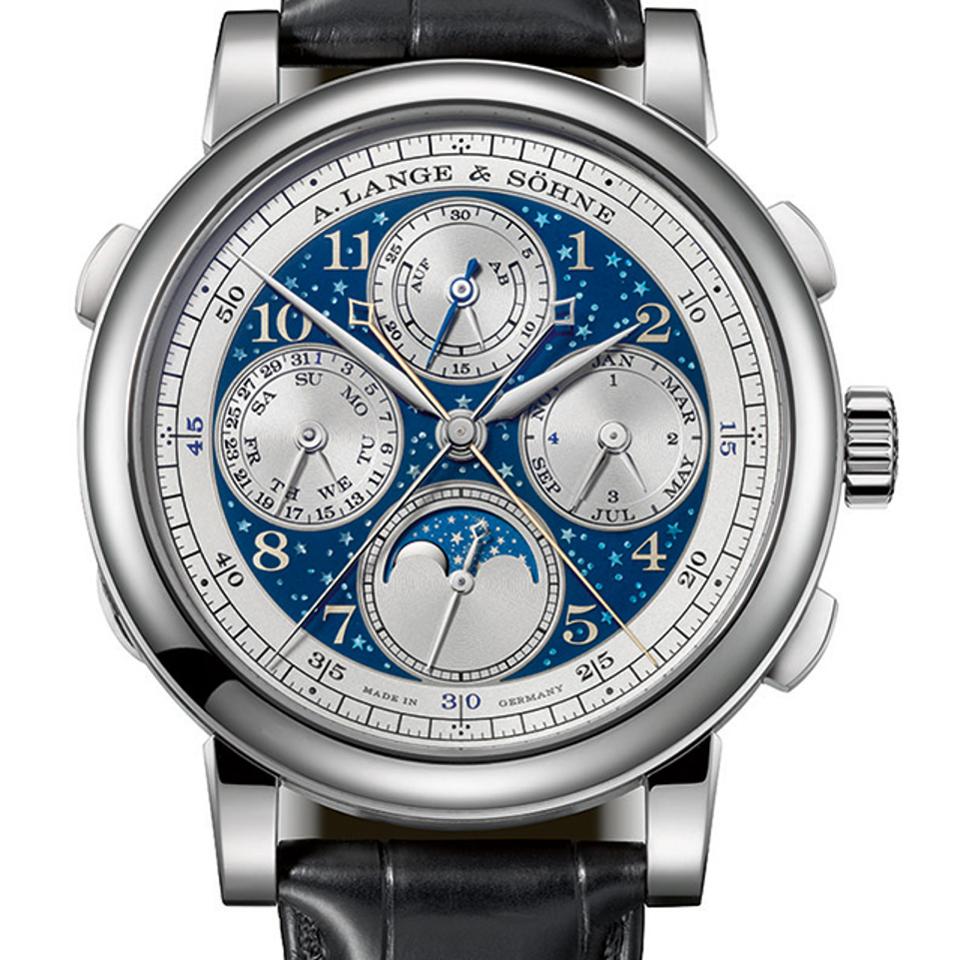 A. Lange & Sohne 1815 Handwerkskunst Rattrapante  Perpetual Calendar moon watch was exhibited for the first time in the USA at WatchTime New York, 2017.

The second day of the show, a Saturday, included not just exhibitions and product unveilings, but also a host of panel discussions and presentations. Easily the highlight of the panel discussions was a morning session wherein five watchmakers gathered to discuss not only their starts in the industry, but also their brand directions and their impression of the watch market today and visions for tomorrow. Panelists included Kari Voutilainen, Roman Gauthier, RGM’s Roland Murphy, and Armin Strom’s Claude Greisler; watch collector, Jeff Kingston, moderated it.

Throughout the day, collectors and watch lovers clamored to see watches and talk to the brands. For the first time ever seen in the USA, MB&F had the new Legacy Machine Split Escapement on hand. A highly technical timepiece, the MB&F LM SE features a suspended balance wheel on the dial side of the watch, with the driving impulse, anchor and escape wheel split off from it and placed at the back side of the movement – concealing it from view. You can read a complete, detailed article about the Legacy Machine  Split Escapement here.  Another factor making this watch so alluring is the frosted dial – created to emulate pocket watches of yesteryear. Each frosted dial is created using a wire brush and done by hand. Four different dial colors are available (though only 18 of each), and MB&F had each of the colors present at the show. 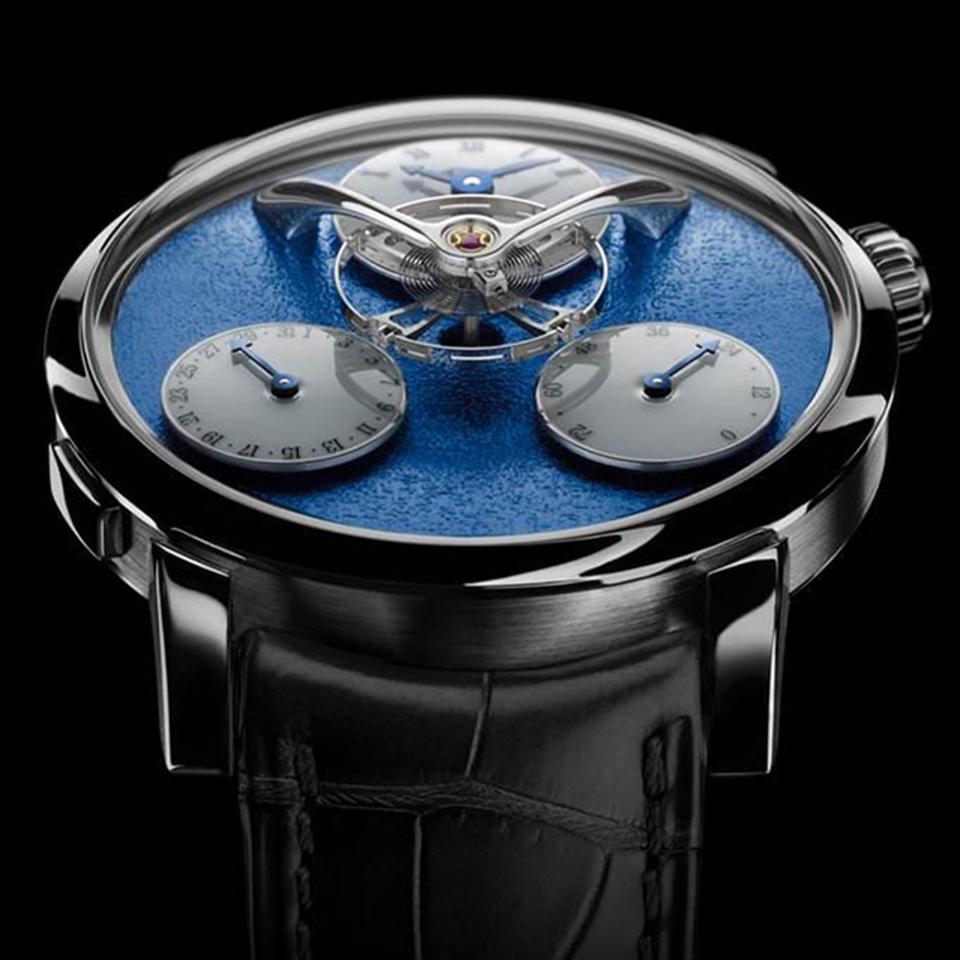 MB&F Legacy Machine Split Escapement made its US debut at WatchTime New York 2017.

Similarly, German brand A. Lange & Sohne’s all-new 1815 Rattrapante Perpetual Calendar Handwerkskunst moon watch made its US debut. The $346,000 Handwerkskunst watch features an incredible starry sky motif and represents the first time the brand combines enamel and engraving on a Handwerkskunst dial. The moonphase disk, which is accurate for 122.6 years, also carries the blue enamel, white-gold star motif on it, and the celestial theme is evident on the hinged half-hunter caseback that has a center medallion with the Goddess Luna engraved on it. You can read much more detail about this watch, which was a highlight for many collectors at the show, here.

In addition to exhibiting its newest timepieces at the show, Swiss watch brand, Longines, also built an impressive historical exhibition that occupied a large part of the registration hall. The exhibition chronicled some of the most important watches unveiled by the brand throughout its history. Among others on display was the famed Longines Hour Angle watch – made in conjunction with Charles Lindbergh. Longines had been the timekeeper for Lindbergh when he made his famous non-stop transatlantic solo flight. The Longines Heritage Exhibition celebrates the brand’s 185 years of history. Among the new timepieces unveiled at the show were the re-issued 90th anniversary limited edition watch celebrating the Lindbergh collaboration, and the Longines Avigation BigEye pilot watch – shown in the US market for the first time. 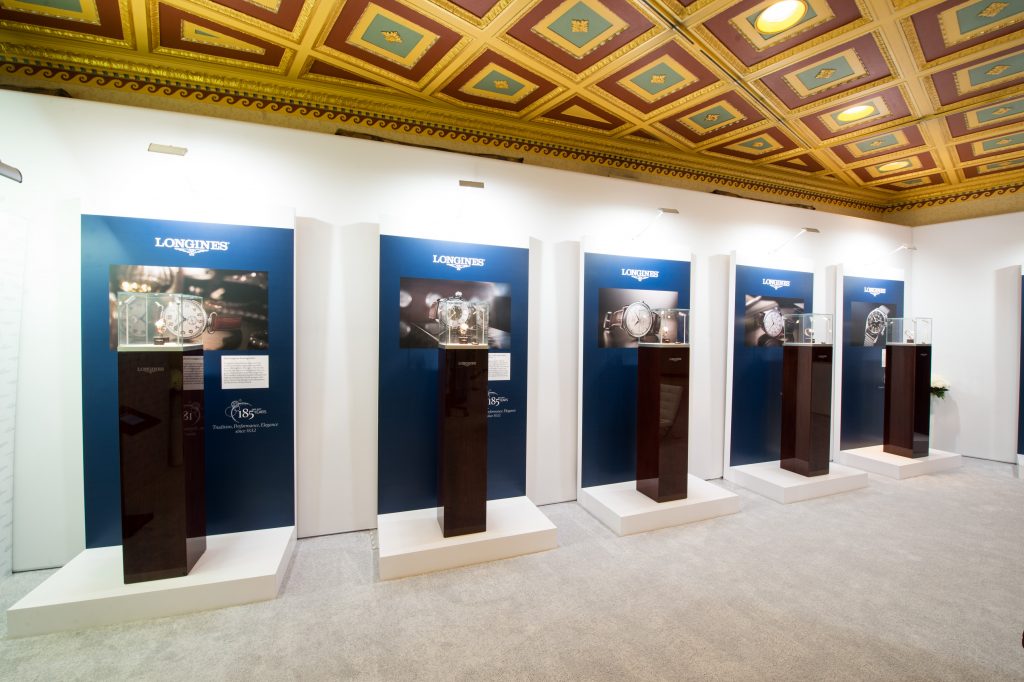 Closing out the WatchTime event as the last presentation of the day, WatchTime’s Mark Bernardo, also author of several books, presented “James Bond’s Watches: Six Decades of Memorable Timepieces from Printed Page to Silver Screen” – easily one of the most lively and highly attended discussions of the two-day event.

WatchTime New York is an annual show held in October at Gotham Hall and open to the public. It is on par (though on a smaller scale) with London’s Salon QP. While no timepieces exchanged hands at the show, sales were definitely made – wherein customers placed orders and would take delivery at a later date via a retail store. Exhibitors at WatchTime New York included the aforementioned brands, as well as Armin Strom, Jaeger-LeCoultre, Omega, Tag Heuer, Zenith and others. The exhibition is created by WatchTime magazine and co-hosted by Watch Anish, with additional partners including Swiss Airlines, Phillips Auction house, Wempe, and others.