This year has been a bang-up year for the watch category of chronographs. From chronographs that time to tinier fractions of a second to those with new indication formats and totally different movement configurations, this category of timepiece rocked 2017. Now, with just about a month left until the GPHG Awards in November, we bring you a look at the top six chronographs of 2017 (as pre-selected by GPHG) and some insight into who we think should win. 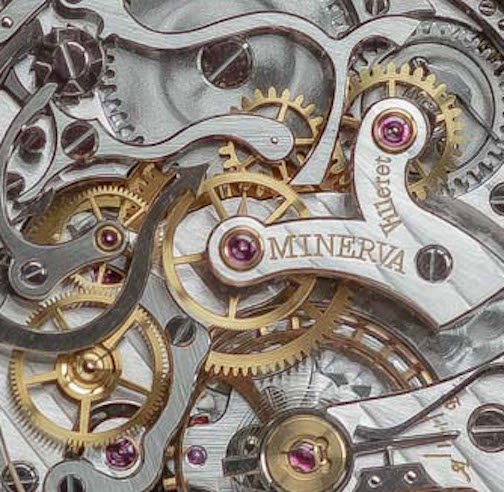 Chronographs are watches that measure elapsed time, and they are no easy feat to build.

The Chronograph category is defined by the GPGH as mechanical watches that feature at least one chronograph indication. Additional indications and complications are admissible. The chronograph complication has long been a favorite of the watch community and the selections the jury must go through for this year’s batch really represent what is available in the market place across a number of different price points. 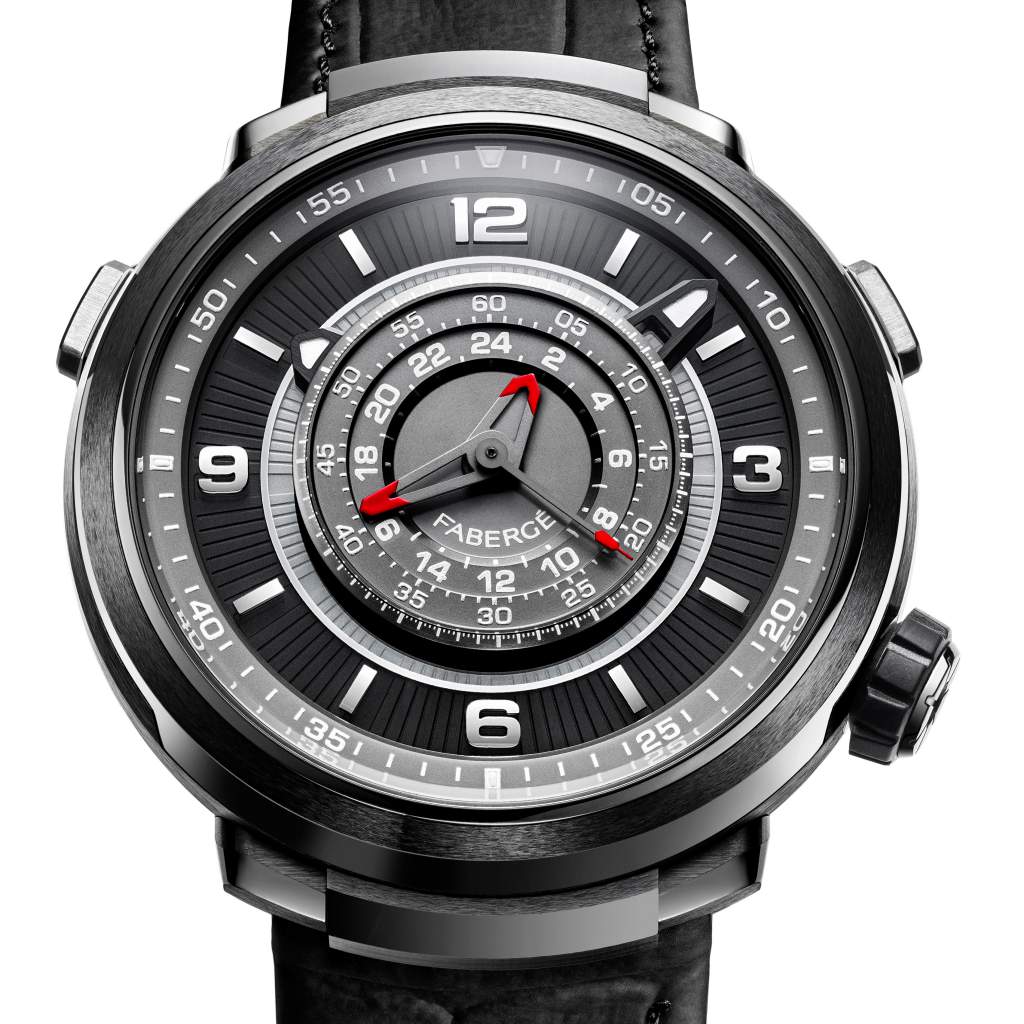 2017 marks one hundred years from the Russian revolution and in celebration of the milestone Faberge released a chronograph to honor the unfinished Constellation Egg of 1917. Similar to the famous Faberge eggs that are layered in their design, the piece from Faberge looks to replicate the same layering effect. Time is read on the periphery of the dial with luminous markers that are designed to appear to float over the dial and the manufacture has moved the chronograph function to the center of the dial that operates with three coaxial hands. In an additional homage, a laser egg has been etched into the watch but only the purchaser will know where to look to find it. Powered by the automatic Caliber 6361, the movement – developed by watch master Jean-Marc Wiederrecht of Agenhor– took 10 years to create and owns five patents. To drive the theme of precision chronographs are known for, the piece features an instant-start feature for the chronograph versus semi-instantaneous currently in the marketplace. Further precision is achieved via the patented AgenClutch, which is a lateral-fiction clutch that allows for smooth engagement of the modern vertical clutch with the flatness of the traditional system. Multi functional snail cams and low torque spiral springs replace the traditional chronograph reset hammers and mechanisms. The newer design allows for lower stress on the system. The chronograph pushers are found at the 10 and 2 o’clock positions and the case of the watch itself measures 43mm.  34,500 CHF. 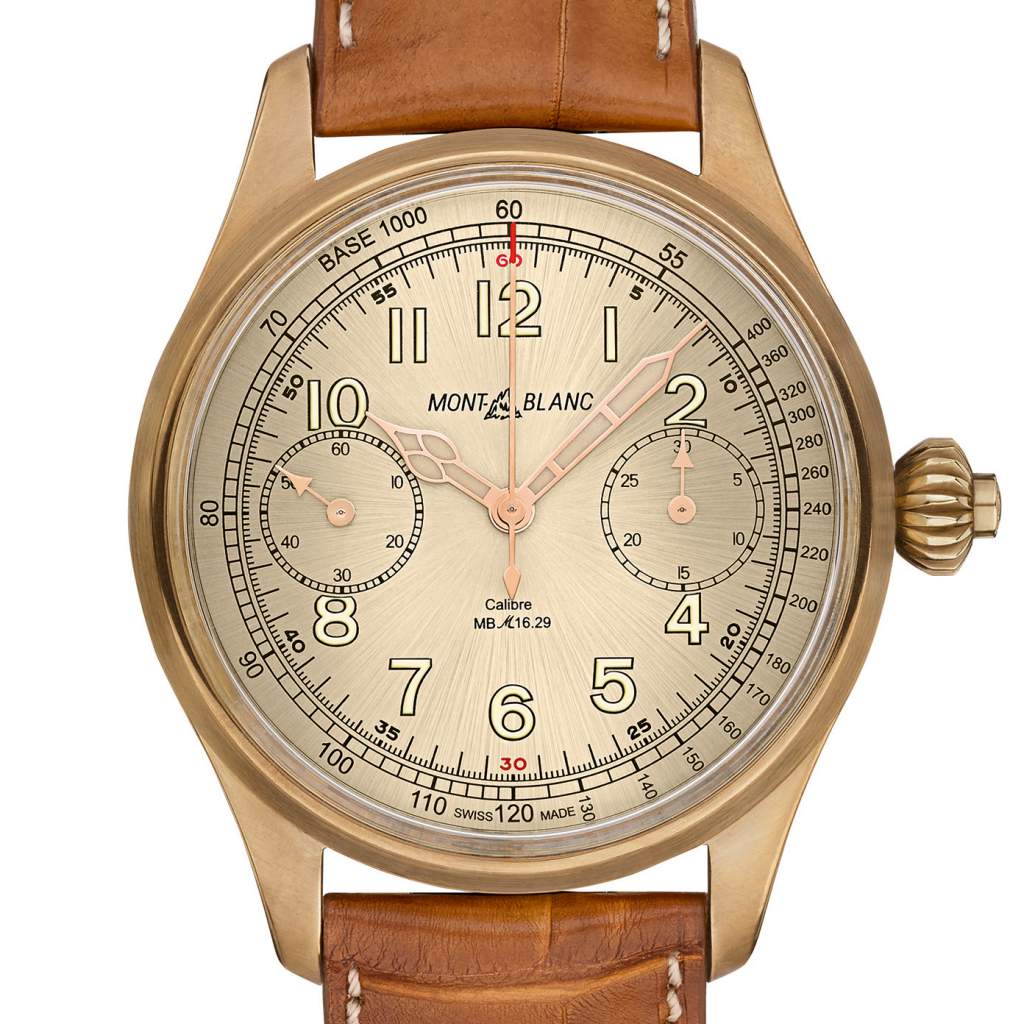 Vintage aesthetics abound in the release from Montblanc, from the case to the movement, the dial design and watch strap, everything screams of yesteryear. The limited edition Montblanc 1858 Chronograph Tachymeter Limited Edition 100 comes in a 44mm satinated bronze case with hypoallergenic bronze colored titanium case back and polished bezel. It also features a matching cognac alligator strap with bronze buckle. The chronograph is a traditional monopusher powered by the caliber MB M 16.29 that features a column wheel mechanism, horizontal coupling, chronograph bridge in a ‘V’ shape, and a large crewed balance wheel vibrating at a frequency of 18,000 semi oscillations per hour and a power reserve of 50 hours. The large 44mm case is inspired by a pocket watches and wrist watches from the 1930s that featured the original caliber 17.29 movement the 16.29 is based off of. The new iteration features the same shaped components of the original caliber, but offers different hand finished details. The chronograph function is displayed via a central chronograph second hand, a minute counter at the 3 o’clock position with a small seconds sub dial at the 9 o’clock. Unifying the complication is a tachymeter scale that runs around the outer edge of the dial. 26,018 CHF. 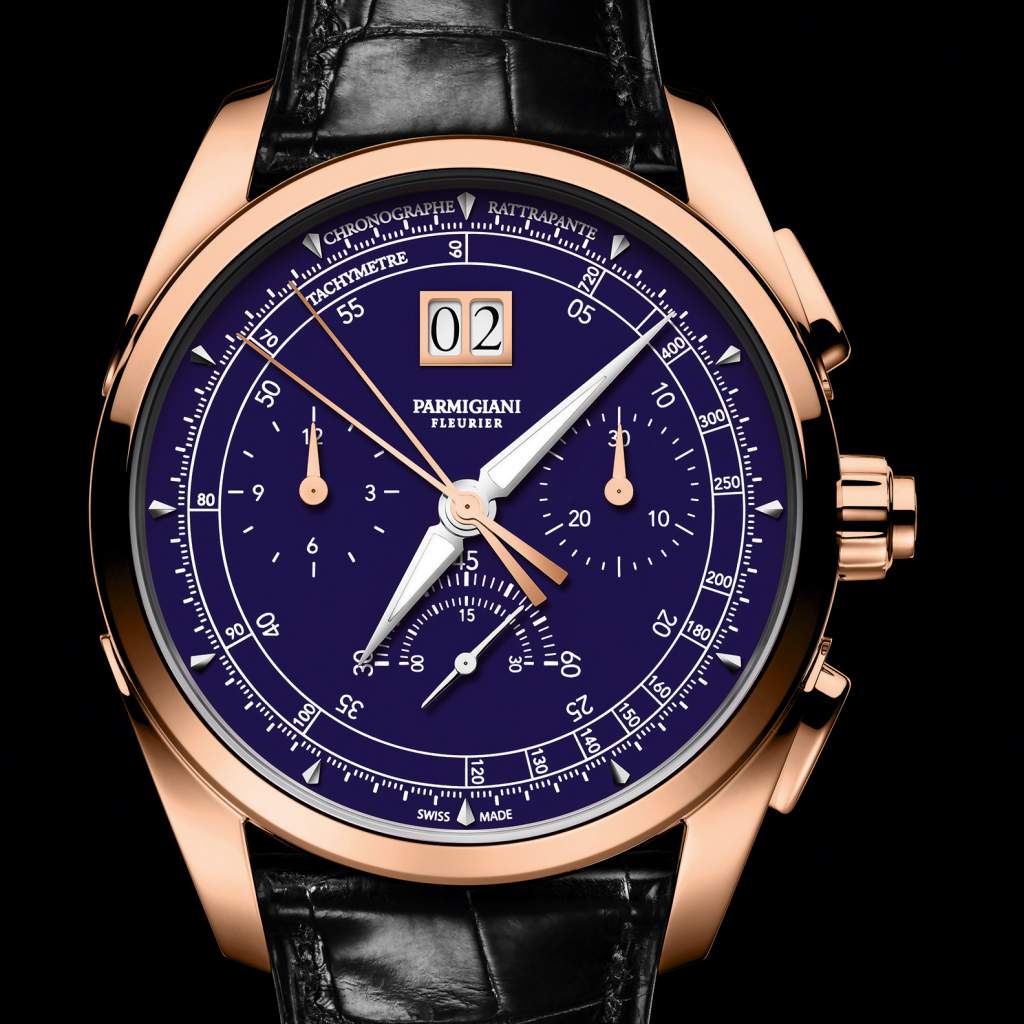 The 20th anniversary piece features an integrated chronograph movement and is meant to be a tribute to the history of chronographs. Creating an integrated chronograph is harder than it sounds. Each mechanical piece, if not done correctly, has a trickle down affect that negatively impacts the entire movement. The manually wound movement features a chronograph, a split second function and a large digital date all on the same main plate. The movement, PF361, beats at 5 Hertz, the high frequency helps to ensure accuracy and as a result the second hand makes 10 jumps per second or in other words is accurate to the 10th of a second. The movement features two column wheels where one controls the chronograph complication and the other is responsible for the split second function. A vertical clutch aids in the starting of the chronograph and eliminates the initial jolt delay that typically occurs in horizontal clutch driven chronographs. Finally the large digital date is incorporated into the movement rather than as a tacked on module. In so doing, Parmigiani is able to keep the movement as slim as possible. To celebrate the anniversary, the movement is made of gold and features open worked bridges visible through the display case back. The piece comes in either a white gold or rose gold case and only 25 of each will be created. If all of this weren’t enough, Michael Parmigiani’s signature is featured on the barrel’s drum. Boom! 135,000 CHF. 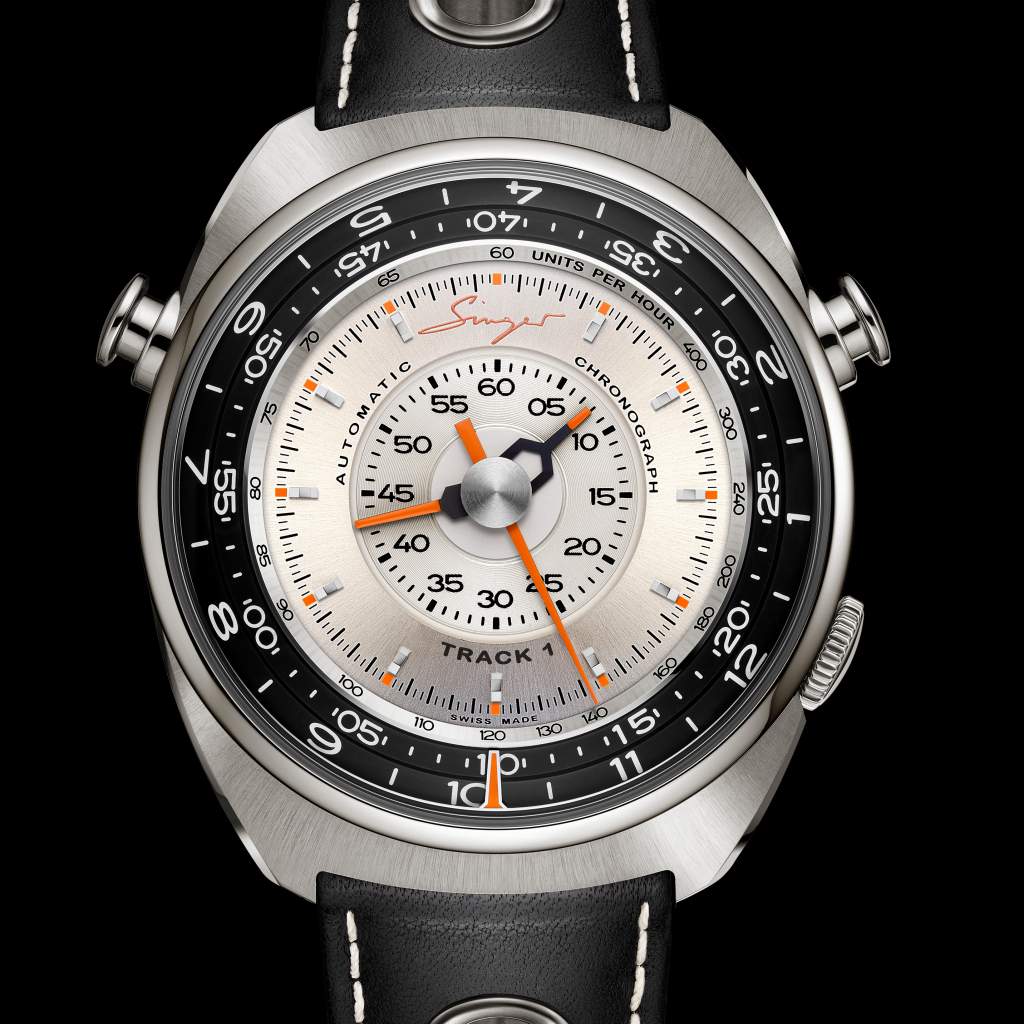 The brand, started in 2014, is a joint venture between Rob Dickerson, the founder of Singer Vehicle Design, and Marco Borraccino, a watch designer that is well known in the industry. Singer’s core principal is to reimagine high watchmaking. To that end Singer has sought innovate how a chronograph ought to look and function. The chronograph function is made to take center stage on the dial of the watch. Inspired by dashboard instruments, the watch boasts jumping hours and minutes and time is displayed around the edge of the dial. The hours and minutes can be read via the marker at the 6 o’clock position. The Singer Track 1 is powered by a column wheel movement developed by Agenhor and features snail cams to ensure smooth engagement of the chronograph function. The integrated crown can be found at the 4 o’clock position and chronograph pushers at the 2 and 10 o’clock positions similar to early dashboard timers. 39,800 CHF. 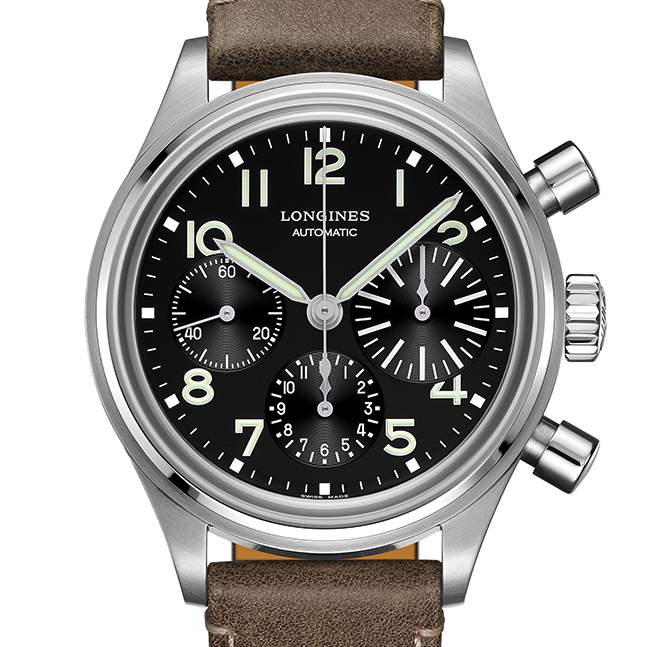 Longines is known for drawing upon its rich aeronautic and horological history in the creation of its pieces. The Avigation Big Eye is no exception and the chronograph is a reissue of a design from the 1930s. The dial is meant to focus the eye on the large 30-minute counter found at the 3 o’clock position and push buttons that can be easily manipulated while wearing gloves. The black dial features large Arabic numerals treated with SuperLuminova© and features the traditional three register chronograph. A 41 mm case, a domed crystal and brown leather strap complete this straightforward vintage inspired piece. 2,300 CHF. 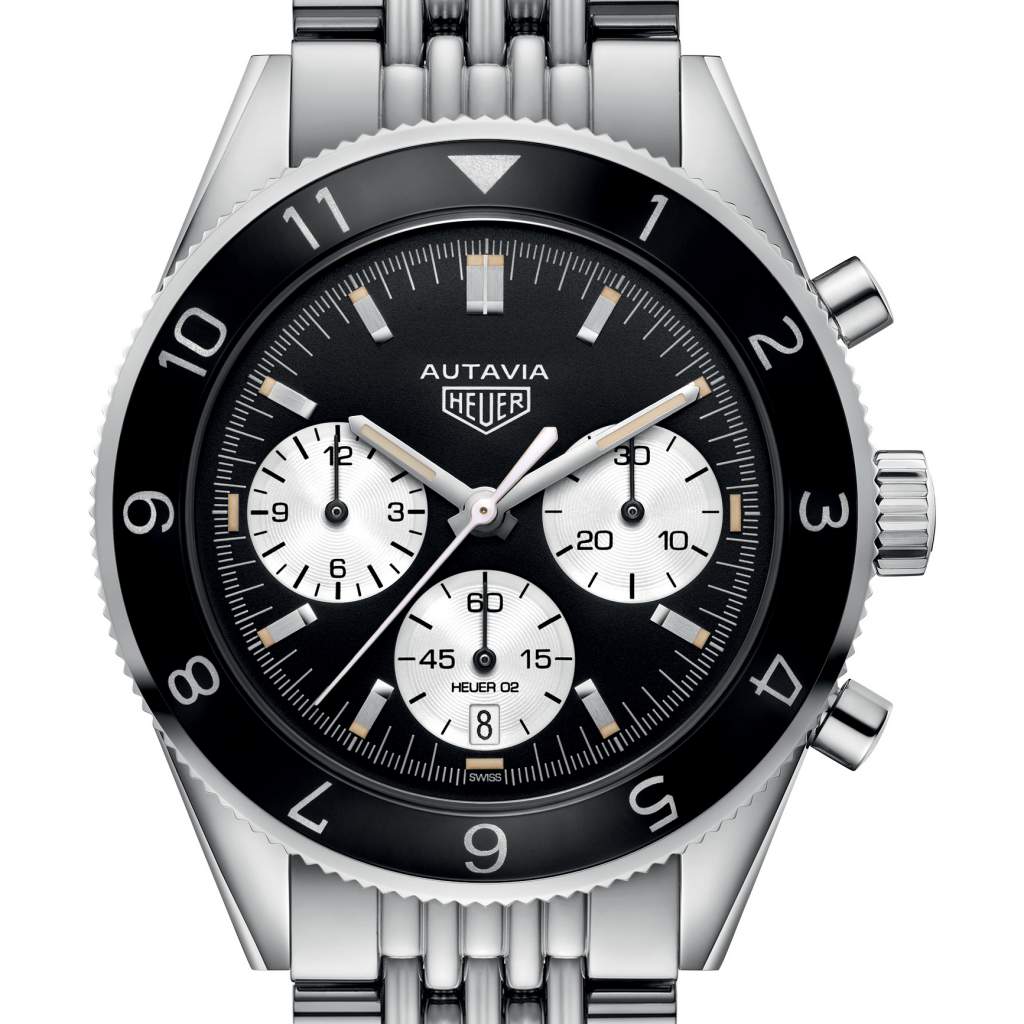 The name Autavia is a combination of the words AUTomobile and AVIAtion and really represents the two main roots behind the functionally of the chronograph. The latest release draws inspiration from the golden era of auto racing and is the result of an interactive campaign the ‘Autavia Cup’ run in 2016. The campaign allowed web users to vote on 1 of 16 vintage models and after 50,000 online votes the winner was the Autavia ‘Rindt’ worn by F1 driver Jochen Rindt. The latest has been updated for today’s market. The new release features a 42mm case vs 39mm on the original. It is also powered by the new Heuer-02 caliber chronograph movement. The piece is self winding, boasts an 80-hour power reserve, date at eh 6 o’clock position, and is water resistant to 100 meters. The bidirectional bezel is constructed from black aluminum and the hands and indices are finished in Super-LumiNova®. The three-register chronograph subdial and 60s inspired 7-row steel ‘beads of rice’ bracelet complete the vintage aesthetic. 4,583 CHF.

Gordon Henderson: As with all of the categories, this one is tough. I love the value play in the TAG Heuer Autavia retailing at 4,583 CHF. There is something to be said for being able to purchase a watch versus dreaming about it. The vintage theme is something TAG nailed in this latest release. In the same vein, however, the Longines Avigation Big Eye is also well executed and a value proposition. The straightforward approach also ranks closely against the TAG Heuer Autavia and I would gladly welcome either to my growing collection of watches. However, as much as I love the two previously mentioned pieces my vote goes to Parmigiani Fleurier Tonda Chrono Anniversaire. The ‘boom’ at the end of the description may have tipped my hand. This watch is simply stunning. From the blue dial to the intricacy of the integrated chronograph movement — everything works. Add to that the stunning dial juxtaposed against either of the gold cases – and this piece a hard one to beat. Now I just have to find 135’000 CHF to place this one on my wrist.

Roberta Naas: Well this is a tough category, as Gordon says, especially because I love the Parmigiani and the Montblanc to no end – each is beautifully executed. However, this category has two timepieces created using technical masteries from watchmaker extraordinaire Jean-Marc Wiederrecht of Agenhor: the Faberge and the Singer Reimagined. I like both – Faberge for the elegance of design and the ability to build many different center motifs; Singer Reimagined because it is a collaboration between cars and watches that works. Between the two, I think the Faberge may have the upper hand.