Top 5 Military-Inspired Watches: After All, We Fought For Our Independence 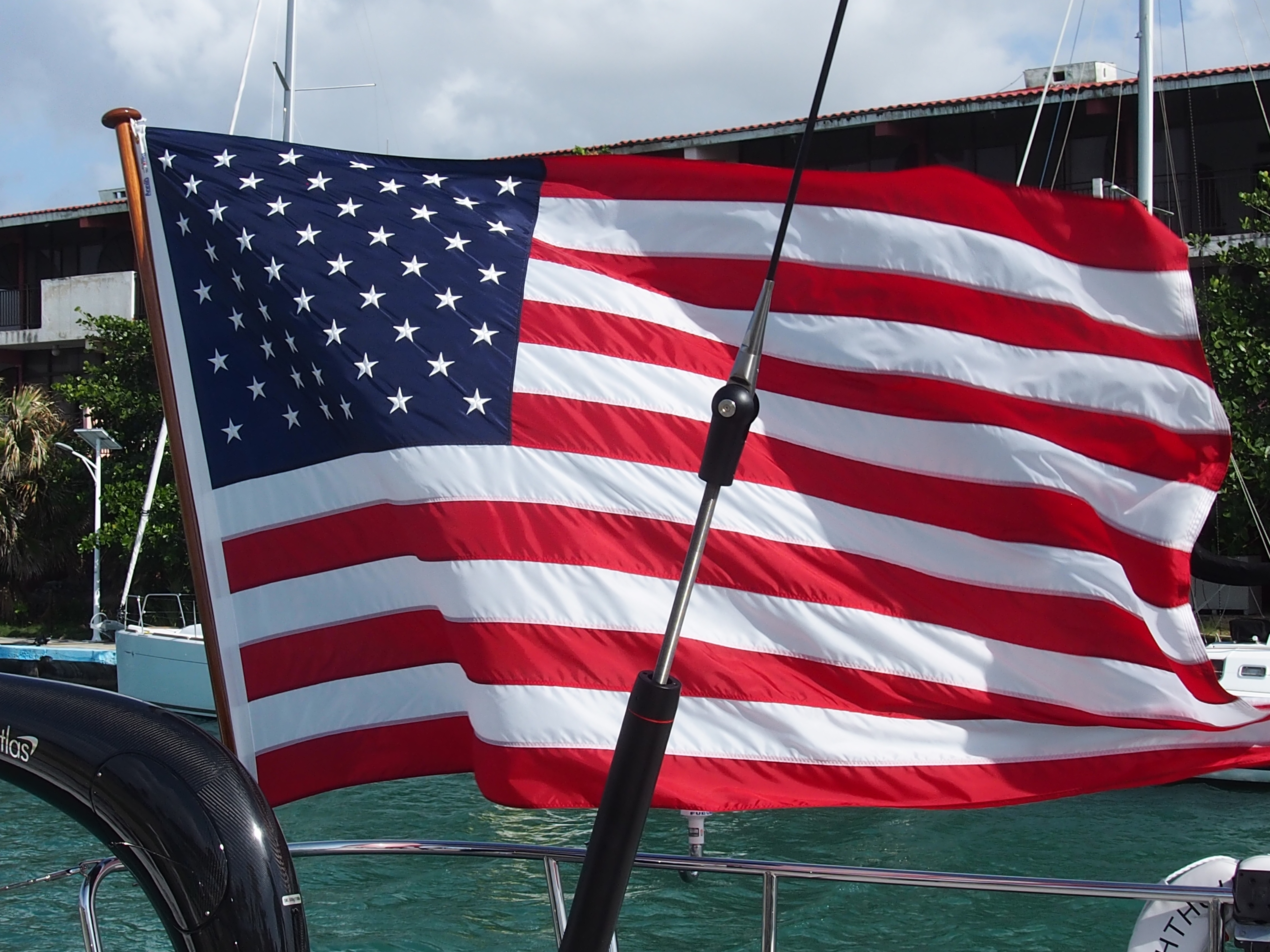 July 4th is Independence Day for America thanks to those who fought for our freedom.

While most other watch writers in America are busy focusing on red, white and blue watches to help us celebrate American’s Independence this July 4th, I just couldn’t bring myself to do that. While Ulysse Nardin makes an incredible skeletonize watch painted with the American flag, and several other brands have something American-themed to flaunt, the “red, white and blue” story just doesn’t work for me.  What does work for me is a look at how we won our independence and how we continue to fight for it.

Back in the 1770’s, with such mis-tabled events as the Boston Tea Party taking place, Americans were rebelling against the British soldiers, and eventually their fights for freedom prevailed. With much bloodshed, America won its independence from Great Britain in 1776. Since then, so many wars to protect our freedom and stand up for what is right have taken place. Lives have been lost and continue to be lost, as we stay ever vigilant.

For this reason, I am focusing instead on the top 5 military-inspired luxury watches unveiled in 2019.

German watch brand Tutima has always been known for its pilot’s watches and even supplied military with its Flieger timepieces throughout the 20th century. The brand focuses on style and legibility, as well as top-notch precision. The newest Tutima Flieger unveiled this year is crafted in stainless steel and offered with a strap or bracelet. We like the rugged steel bracelet and the fact that this watch offers a power reserve of 38 hours. Its green-to-black dial is military inspired and offers a utilitarian layout. The baton indexes and Arabic numerals, as well as the lozenge hands create a highly readable look against the degrade’ dial. The  watch is powered by the  automatic Caliber Tutima 330.A. It naturally offers a signature triangular index to locate the 12 o’clock position on the bezel and its dial and hands are luminous.  Approximately $1,800 for the night-greed dial and steel bracelet. 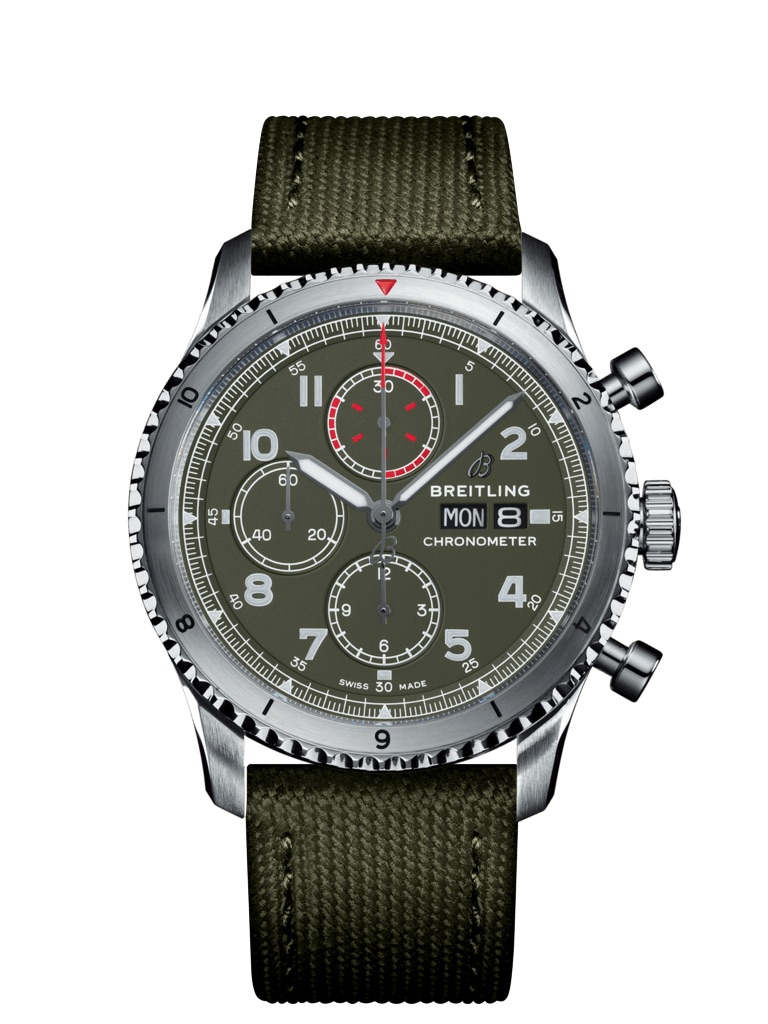 New this year, the COSC- certified chronometer Aviator 8 Chronograph 43 Curtiss Warhawk features a military green dial with a matte finish and tone-on-tone subdials. Housed in a steel and black steel case, the dial is easy to read thanks to luminescence and larger numerals. The Breitling self-winding Caliber 13 offers 48 hours of power reserve and is water resistant to 100 meters. Crystals are glare proofed on both sides. $5,565. 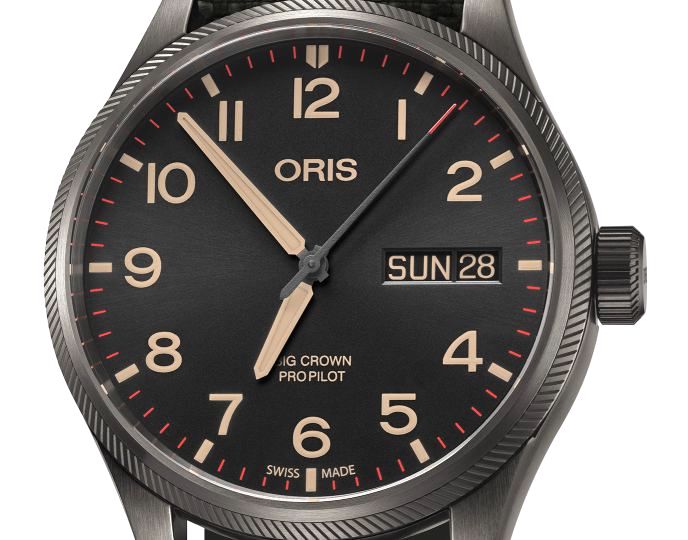 The Big Crown ProPilot collection from Oris offers functionality and readability in addition to Swiss precision timing.  The new Big Crown ProPilot 40th Squadron watch celebrates the brand’s first watch made in partnership with the 40th Squadron Heli, the Belgian Air Force’s iconic rescue team. The design is based on the Oris Big Crown ProPilot Big Day Date pilot’s watch, and is decorated with the colors of the squadron’s helicopters: signal red for the minutes scale, seconds hand tip and strap lining; camouflage brown for the hands and hour markers; military green for the strap; and black for the dial and case. The squadron logo is engraved on the 45mm stainless steel watch’s case back. It is powered by an automatic movement developed by Oris. Just 500 pieces will be made. $2,200. 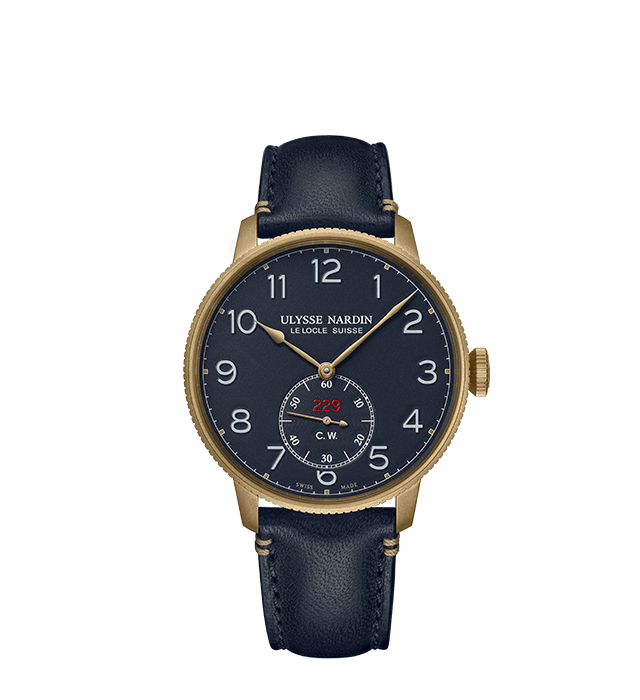 Ulysse Nardin not only has a long history when it comes to Marine chronometers, but also when it comes to the military. The brand’s long-standing partnership with the US Navy began in 1905 when it supplied on-board deck chronometers as a result of a competition devised by the  Washington Naval Observatory. The Observatory was on a quest to find  a  ‘ timepiece as a supplier for the   Navy  torpedo boats with an hour of reference as accurate and reliable as those on the largest naval vessels. Ulysse Nardin won the competition several years in a row and became the official supplier of the American Navy.To honor its history, the brand has unveiled a host of models and this year releases the striking Marine Torpilleur Military Bronze watch. Crafted in bronze with a blue dial and Arabic numerals, the COSC-certified chronometer watch is powered by the brand’s Caliber UN-118 with Silicium  and Diamonsil technology. It is water resistant to 50 meters. $8,900.
MTM Special Ops Predator II 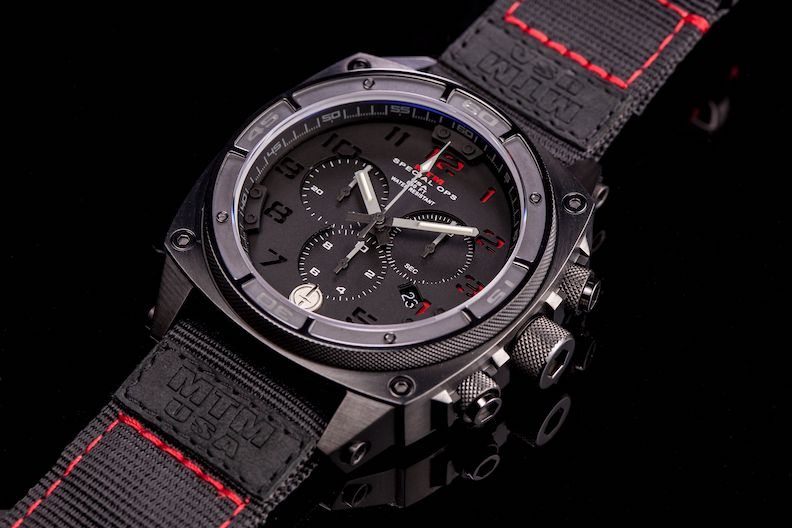 Rather than inspired in design by the military, American-made tactical watch brand MTM Special Ops actually builds watches for the military and other tactical and law enforcement organizations. While it bills itself as the watch for weekend warriors and pioneers, the brand has partnerships with a host of military, tactical and police organizations. Its watches are built to go the distance and offer such features — depending on the watch — as a patented bracelet that uses ball bearings instead of metal bars for the links, water resistance of 1,000 meters, the strongest light ever developed for a watch, and more.  This brand is radically different — and is built to order, so you can customize many elements of your timepiece. The Predator II watch shown here is the result of a request from combat personnel to MTM. The  watch is build from a solid block of stainless steel or titanium with DLC coating and is powered by a Swiss Ronda Chronograph movement. It measures to one-tenth of a second, has a unidirectional ratcheting bezel, and is water resistant to 200 meters. The links are self-adjustable with an Allen key that is supplied with the watch.  Retail prices range from $695 to $1,170 depending on the customization.

i should note that for purely personal reasons, my tactical watch of choice is one created in conjunction with  Law Enforcement Today (LET), the largest national on-line publication for police officers in America. Together they have created a watch that supports fallen officers and their surviving families and co-officers via Concerns of Police Officers (C.O.P.S.).The  stainless steel MTM Special Ops C.O.P.S watch — which can be customized — benefits the organization, with a sizeable portion (40 percent) of the sale of each new MTM Special Ops C.O.P.S. watch  being donated to  (C.O.P.S.).