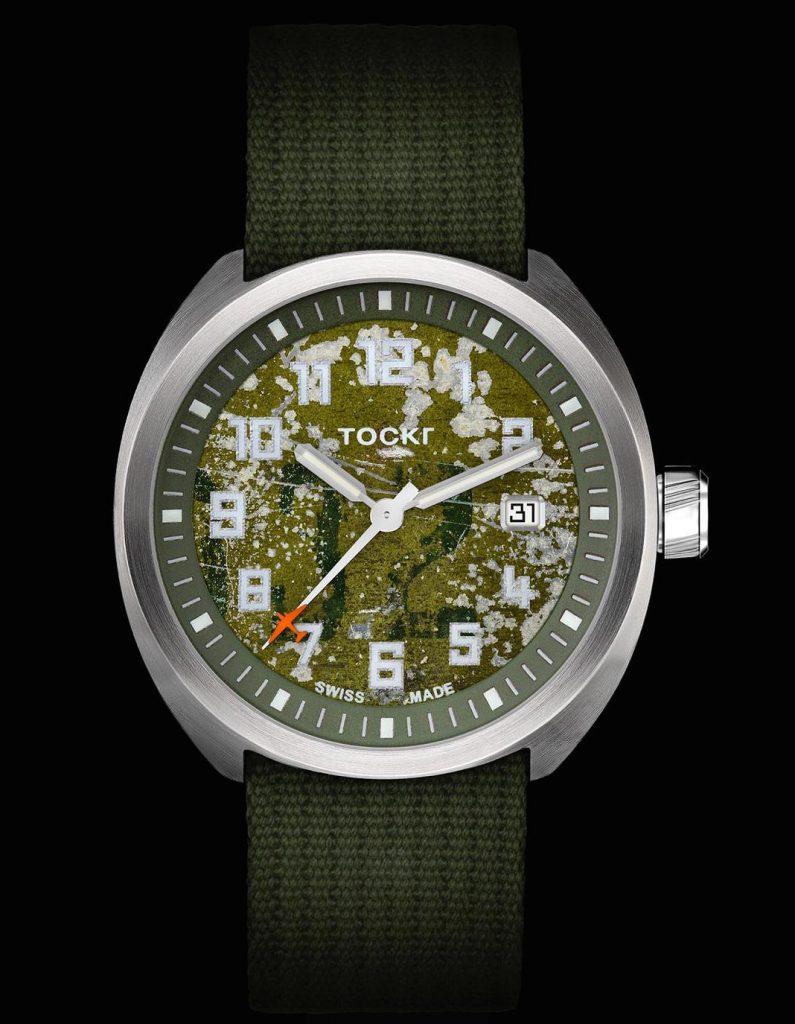 Today, young independent Austin,Texas-based watch brand Tockr unveils its Air Force inspired D-Day C-47  Limited Edition watch — using material from the famed “That’s All, Brother” paratrooper transport plane that flew on D-Day,  June 5, 1944, leading a formation of more than 800 aircraft all abiding by strict radio silence. That C-47 Skytrain had a very special message on its nose: That’s All, Brother. It was designed to give a strong message to Hitler when it arrived above Normandy Beach in the morning of June 6. The aircraft made several missions on D-Day and after, until it was retired and all but lost. However, in 2015, two USAF historians discovered the famed paratrooper transport and contacted the Commemorative Air Force, which is dedicated to preserving American aviation history. Now, Tockr releases a commemorative Day C 47 watch with material from the plane as the dial of each timepiece. 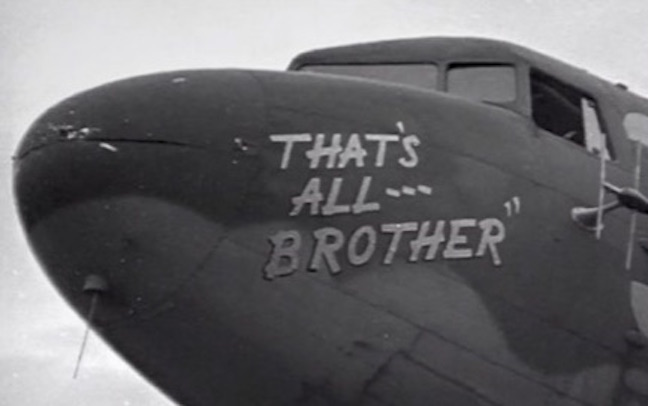 Rest assured, Tockr did not take material from the plane wantonly. In fact, the brand worked with the Commemorative Air Force (CAF), which has restored “That’s All, Brother,” to acquire materials that were too damaged to use in the restoration. It was a natural move for Tockr, which already has a line of C-47-inspired watches thanks to the aviation passion of Tockr  founder Austin Ivey. (Ivey’s grandfather, Eugene Xerxes Martin Jr., served as a World War II lieutenant in the Army Air Transport Command.)

According to Tockr, “Salvage from That’s All, Brother is a physical attestation to an historical event. D-Day was a turning point in WW2 that helped restore civility and freedom within Europe, but it came at a high cost. The events that unfolded on that fateful day need to be remembered, honored and passed on to future generations.” 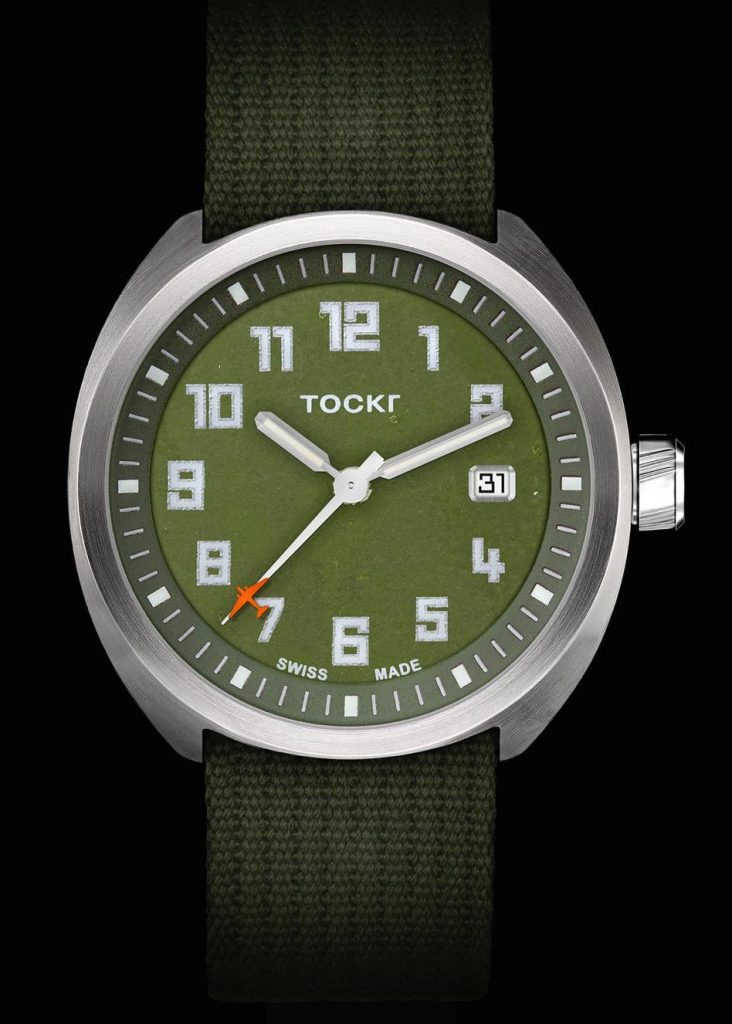 As such, the brand uses metal cut from That’s All, Brother as the baseplate for the dial of the new special edition watch. Each historic dial is cut from a part of the aluminum removed during the restoration. Each piece of scrap material is unique, with its own aged patina that tells a tiny fragment of the story of D-Day. There are three dial hues being preserved under the sapphire crystal of the watch:  Clean Cut (light to medium weathering with hues of brown and green and some scratches or light chips), Stamped *medium weathering with dark to light hues of brown and green and some yellow or blue hues running through it), Hard Worn (heavily weathered, crackled and chipped in use of brown and green wit areas of exposed aluminum). 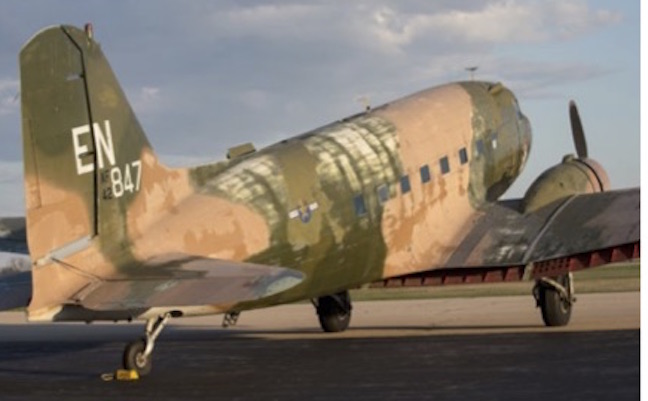 Each D-Day C47 cushion-cased 42mm watch is assembled in Switzerland and uses anti-glare crystal. The three hand timepieces are equipped with Swiss ETA-2824 self-winding movements, that offer approximately 40 hours of power reserve. The watch is sold with two straps: drab canvas webbing  and leather., with a quick change spring bar for easy interchangeability. The caseback is engraved with  the “That’s All, Brother”  wordmark, and the CAF logo. The watch is being made in small batches of 100, with the first batch created exclusively for the CAF members first.  Every watch is numbered and comes with a certificate of  authenticity, signed by the CAF, guaranteeing its use of genuine material from That’s All, Brother. 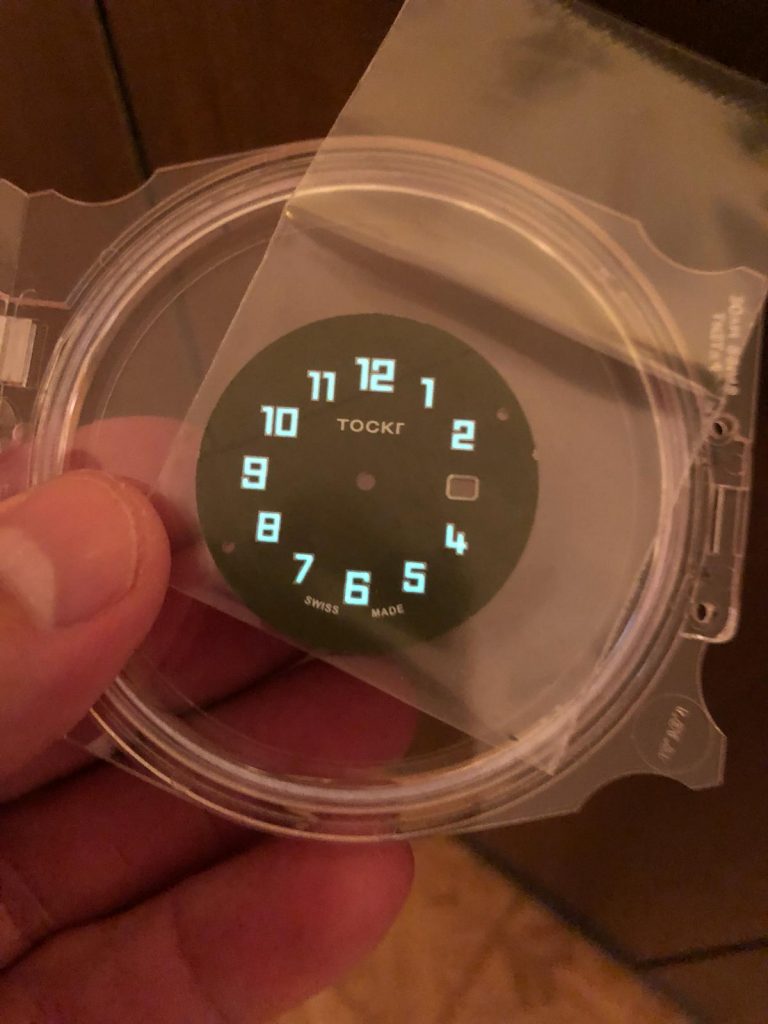 Tockr dial made from That’s All, Brother C-47 carrier metal.

The watches will retail  for $1,990 and a portion of the proceeds of the sale of each of the Limited Edition watches will go toward funding the CAF. They will be available for sale beginning on November 1 via Tockr.com and at Neiman Marcus. 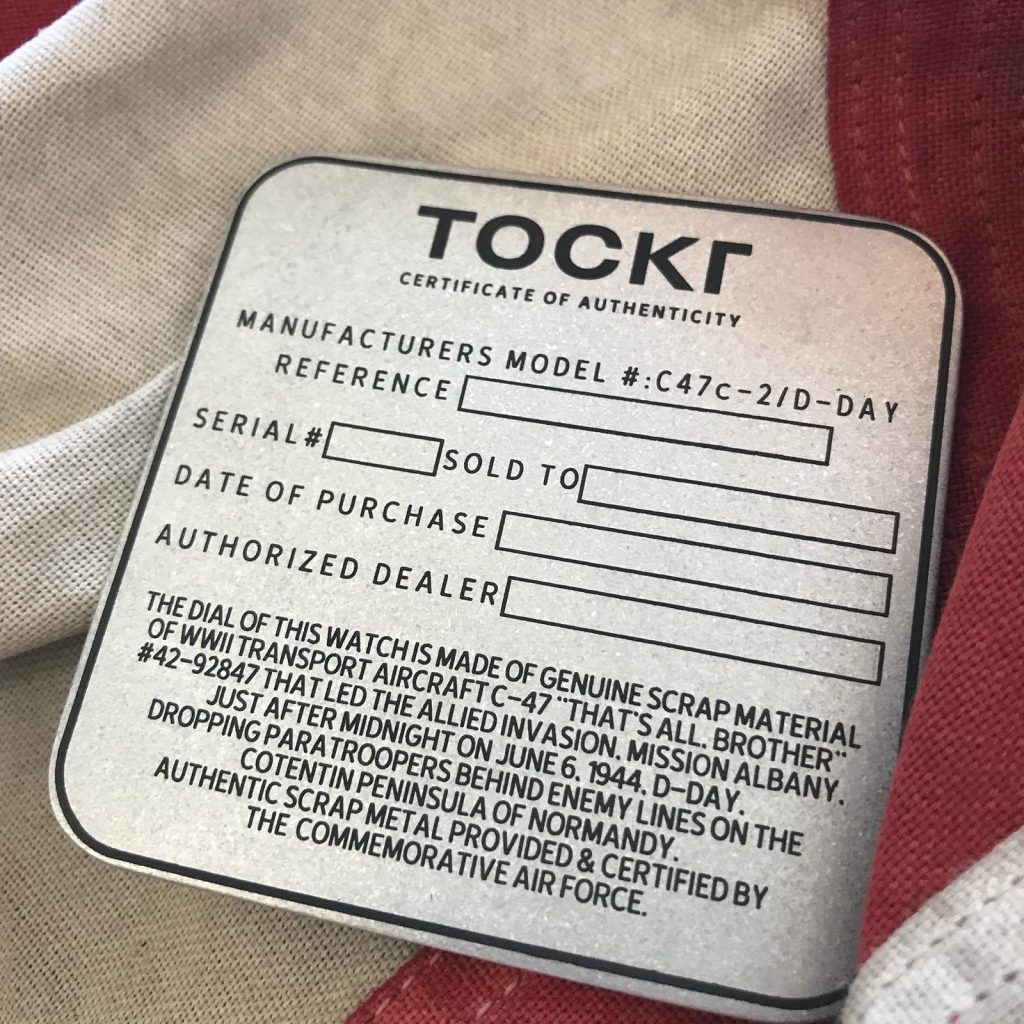 Every watch comes with a certificate of authenticity.