Last night, we had the unique opportunity at the 51st New York Film Festival of joining film makers, screen writers and critics at Lincoln Center for a panel discussion about screen writing. In attendance was the Film Society of Lincoln Center’s first-ever Filmmaker in Residence: Andrea Arnold. 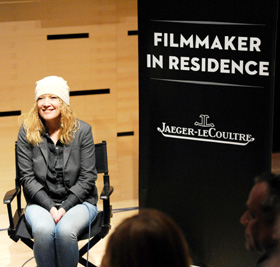 The concept of having a filmmaker in Residence was developed by Jaeger-LeCoultre, long-time friend of film and a sponsor of many film festivals around the world.  In New York, the brand wanted to do something that truly supports the arts, says Philippe Bonay, President of Jaeger-LeCoultre. As such, it developed the Filmmaker in Residence program with Lincoln Center’s Film Society. While Jaeger-LeCoultre sponsors the filmmaker, the choice is entirely in the hands of the Society. This year – the first of many – British screen writer, director and filmmaker Andrea Arnold moves to New York City, where she intends to create a “Road” movie. 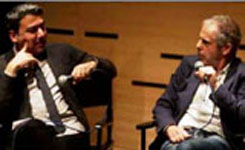 Screen Writer Henry Bean talks about how his experience breaking into a car to silence an alarm led to a movie. Seen with Eugene Hernandez, moderator on left.

Arnold says she takes her inspiration from the people on the streets, from snippets of their conversations and creates entire stories around them. She will also travel to Kansas, which she considers to be the heart of America, for diversity in inspiration. Arnold has thus far created three films, including The Fishtank (inspired by an image of a teenager urinating on a carpet in a living room), Red Road and her interpretation of Wuthering Heights. 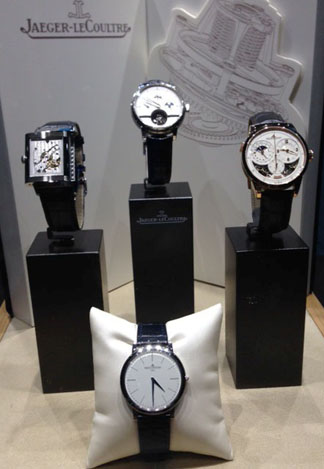 Jaeger-LeCoultre is the key sponsor behind the NYFF’s first Artist in Residence program.

It was an inspiring discussion of writers’ inspirations, fears, accomplishments and even their blocks and how they handle them. As a writer of a different sort, I found the hour-long discussion enthralling. What did I walk away with?  Never be afraid to put your ideas on paper; they won’t sound as lively as they do in your head, but they’re there. Just Start. You have to start somewhere.  It’s never too late to start. Don’t compare yourself or your work with others, be true to what you see in your mind. If you have writer’s block (which I often do), take a break (anything from standing up to taking a walk), get perspective and continue. You can be whatever you want to be.  There was a lot more, but this was enough for me for now. As to the world of watches? As Bonay put it, “Many people play a role in the making of movie; it is the same with the creation of a watch.”  Indeed, both take innovation, vision, determination and courage.

Today, I digressed from the world of watches thanks to Jaeger-LeCoultre.