Storage Wars: The Best (And Worst) USB Keys From SIHH 2018 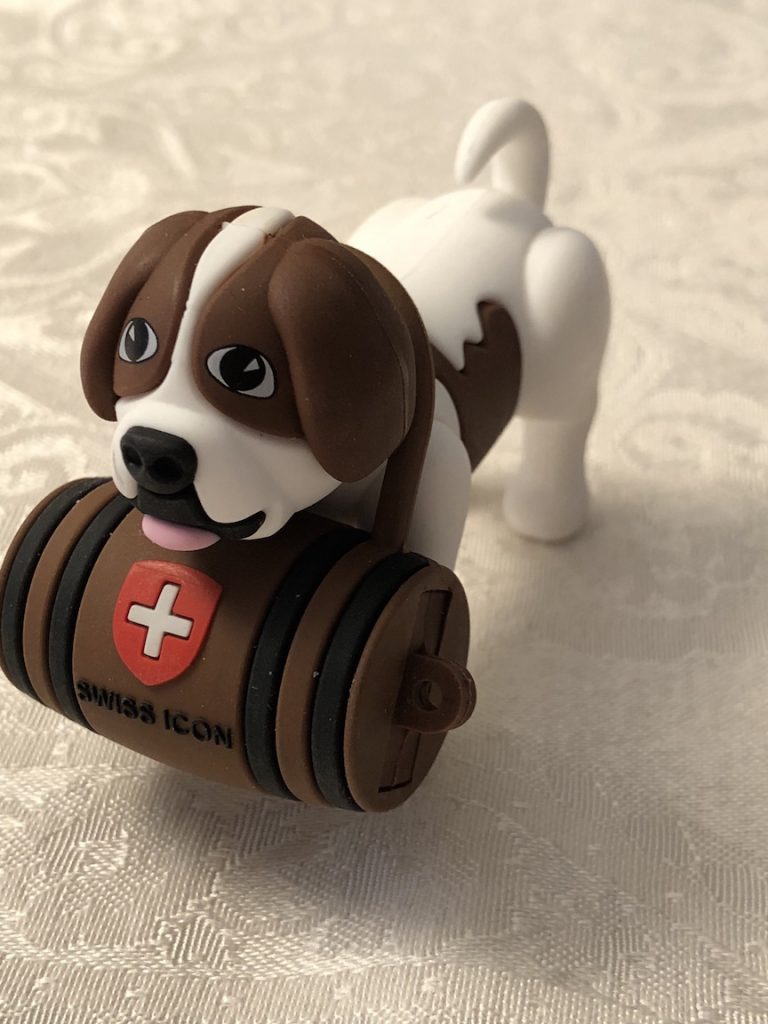 We are into our sixth year of our much-loved Storage Wars coverage. Each year since 2012, we have taken a close look at the USB keys that we receive at the shows — mentioning the stand-out sticks that carry a powerful punch. Each USB key holds all of the important press releases and images released by a brand at the show. Some of those keys are — sometimes — even as creative as the watches that appear when the stick is inserted into the computer drive.  Some brands make an effort to create a cohesive look — presenting a USB key that mirrors their most important product launch or the redesign of their exhibit space and message. Here, we bring you our sixth year of Storage Wars, and the best, and worst, USB keys from SIHH 2018.

The clear winner was the USB key from H. Moser & CIe. This brand continually offers tongue-in-cheek attitude and plays on the concept of Swiss made. Last year, the brand’s USB key was a cow.  This year, it is the beloved St. Bernard rescue dog. The USB stick pulls out from the barrel flask that is around the dog’s neck. Ingenious, fun and certainly carries a Swiss-made message. As if that wasn’t enough, H. Moser & Cie also created a canvas tote bag: on one side is the image of the Swiss cow (last year’s symbol) and on the other side is an image of the St. Bernard — making it the ultimate doggie bag. A consistent message. Bravo. 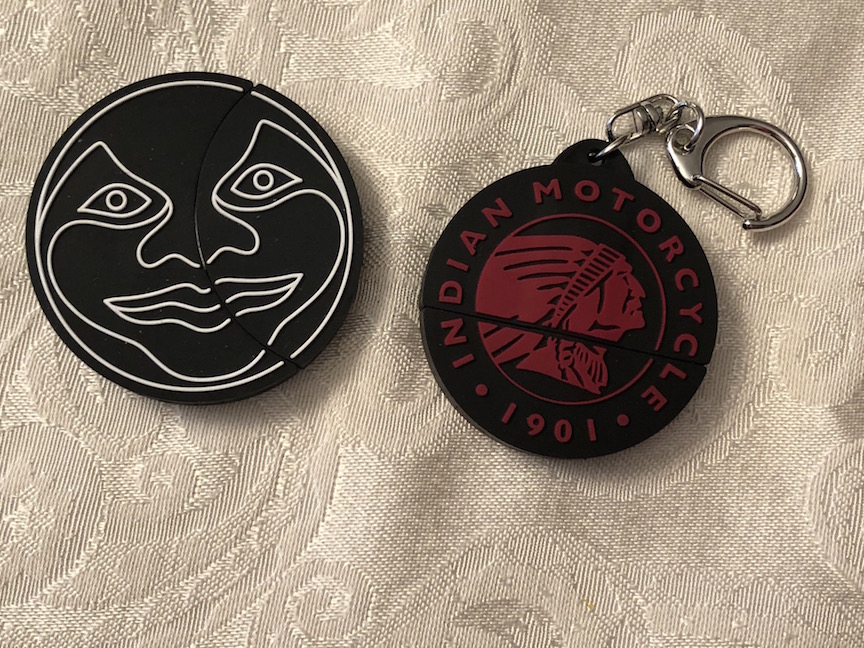 Runners Up this year include a frequent winner: MB&F. This brand regularly offers USB keys that recall its top timepiece release. This year, the brand worked with Sarpaneva for an all-new MoonMachine 2 watch. The USB key is made of round rubber and features the face of Sarpaneva’s signature moon design.

Another runner up, Baume & Mercier,  took a very similar tact by turning to a round rubber key that features the Indian Head logo on it on one side and the Baume & Mercier logo on the reverse side. The brand recently struck up a partnership with the beloved American motorcycle brand, Indian, and the USB key proudly showcases the famed Indian head. 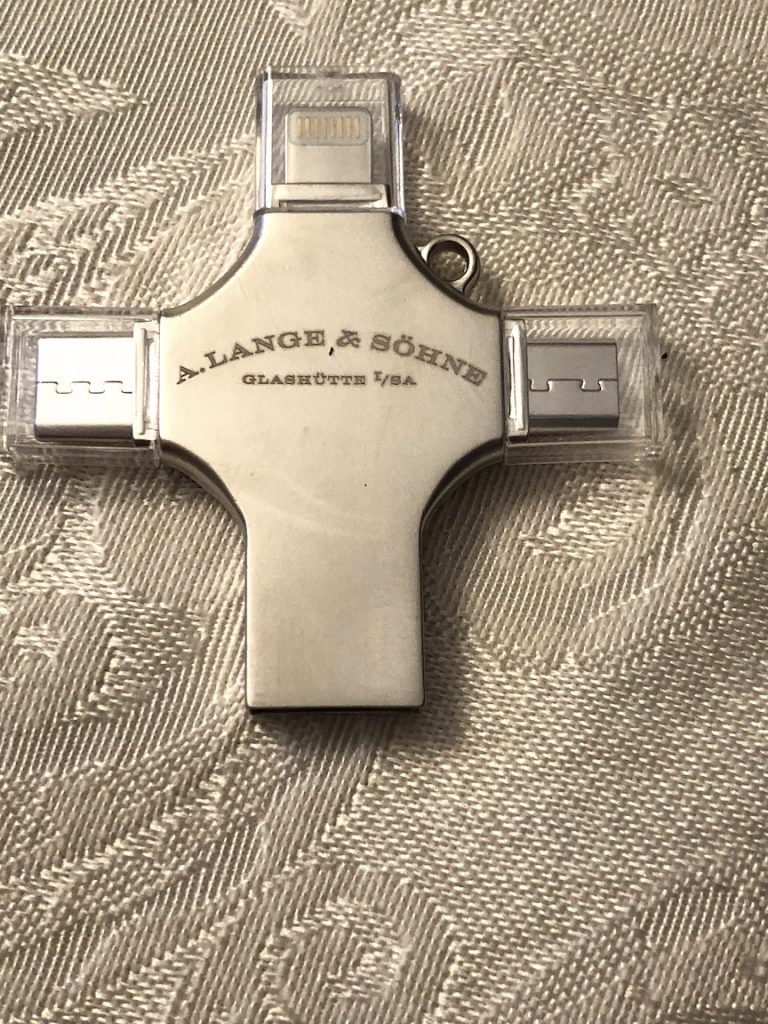 Honorable mentions need to be made this year as well. A. Lange  & Sohne distributed a very useful USB key in the shape of a cross with three ports. 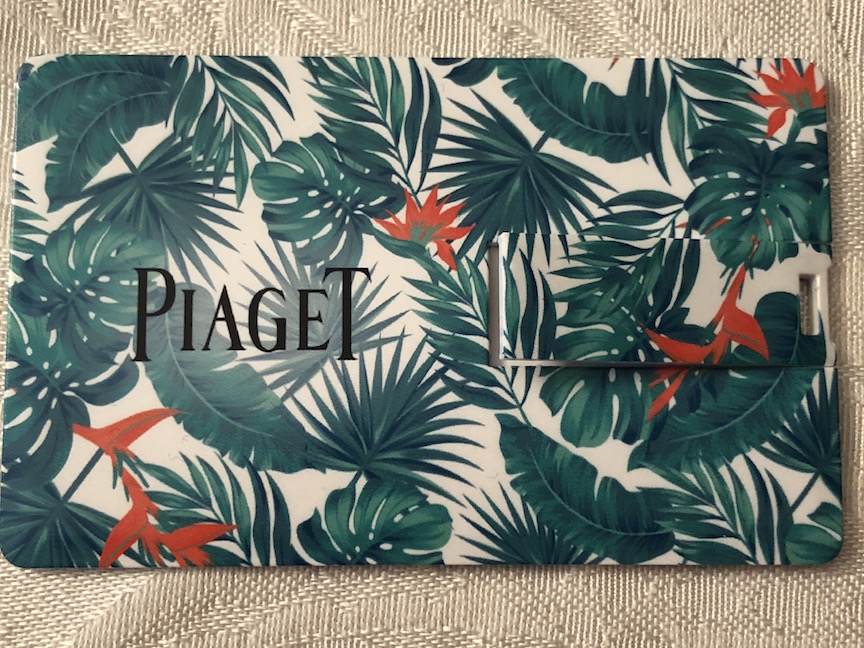 Storage Wars SIHH 2018: Piaget’s flat-card USB gets honorable mention for its recreation of the exhibit space theme on the stick.

While a flat-card USB is not creative, Piaget nonetheless deserves a mention for emulating the tropical oasis of its new exhibit space on the USB card. 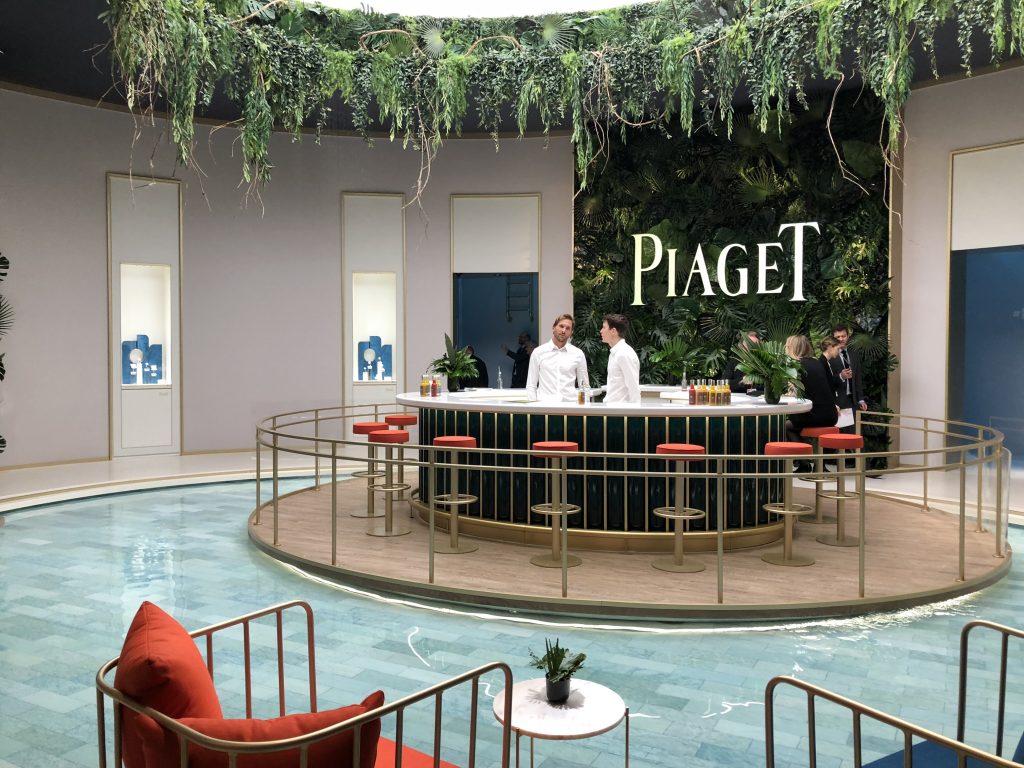 Ok so we admit, these aren’t exactly USB keys. Instead they are the new generation of press-kit information that is rearing its ugly head: download links. We hate these. Instead of getting all you need at your fingertips as the USB key makes contact with the computer, some brands want us to take pictures of their scan links or go directly to a specific URL so that we can cull through hundreds of texts in multiple languages and many different images and then download them into our computers. We don’t like this method. Interestingly enough, these “cards” with info on them are getting quite elaborate, with color photos, scan images, and more in bi- and trifold format and in super heavy stock paper and cardboard. Why go so elaborate? Just bring back the creative USB sticks. 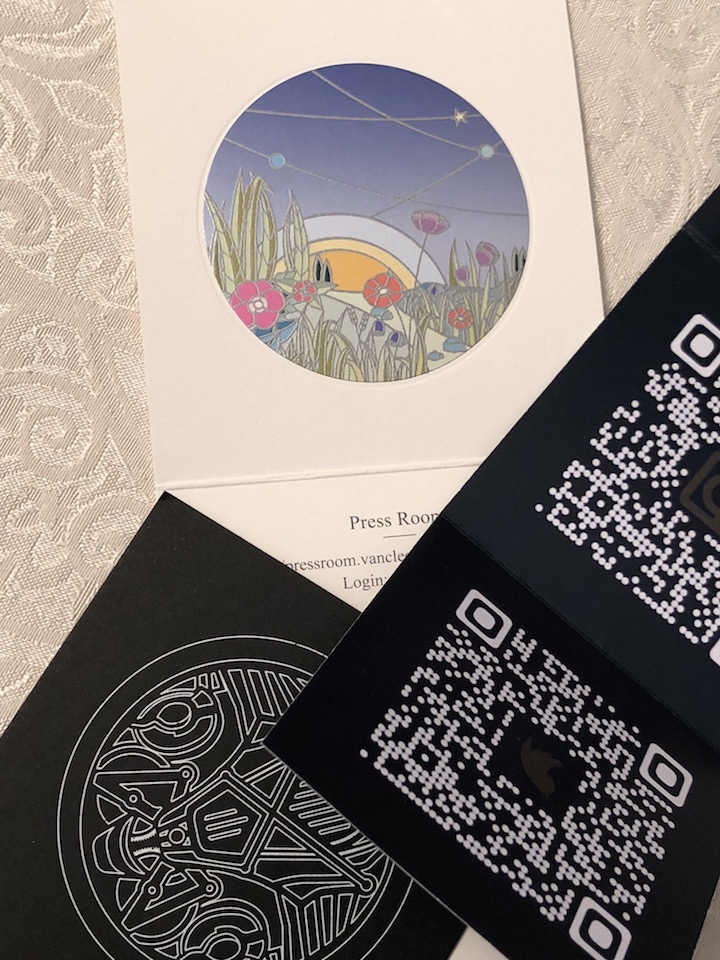