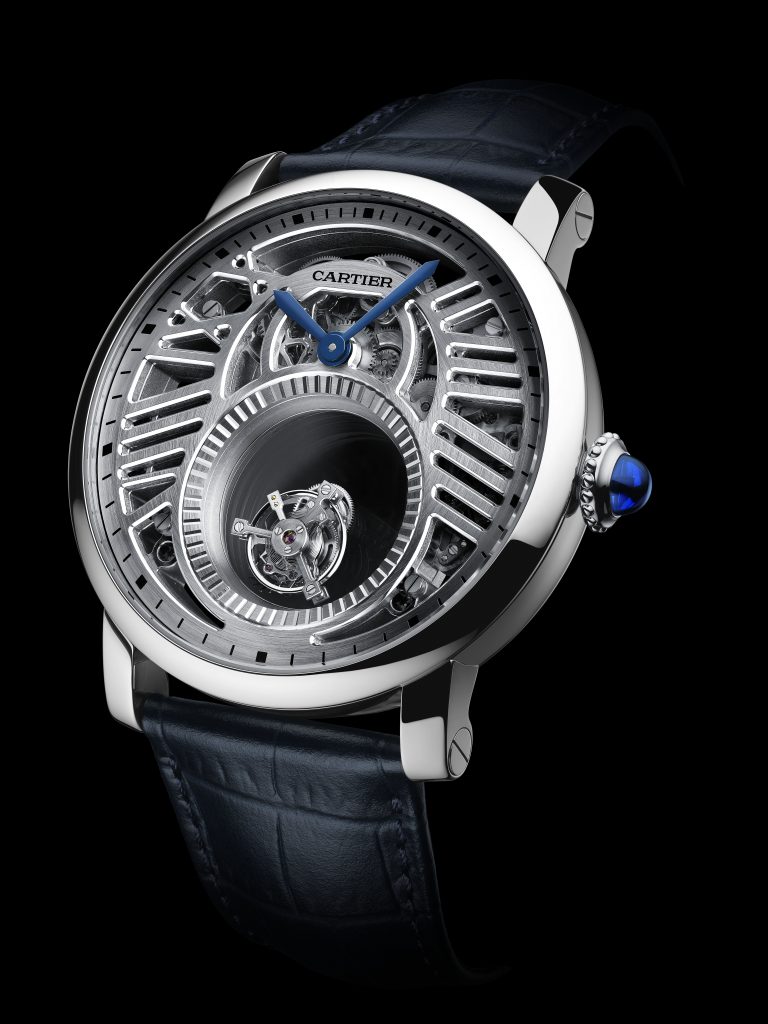 Next week, SIHH will be in full swing. It will be a wild and wonderful time as we visit nearly 50 brands in Geneva and get the newest low-down on thousands of watches. In anticipation of being quite busy, we are getting a jump on bringing you some of the newest watches already unveiled as Pre-SIHH pieces.  Cartier — a brand we write about often here, and for good reason — releases the  intriguing Rotonde De Cartier Skeleton Mysterious Double Tourbillon, and the  Rotonde de Cartier Mysterious Day and Night watch.

Cartier has long been a leader in mysterious watches and clocks and the Rotonde De Cartier Mysterious demonstrates the brand’s  prowess in the haute horlogerie field yet again. In fact, the brand has been building mystery clocks since 1913 when the first such clock was unveiled. It was the result of a partnership between Louis Cartier and watchmaker Maurice Coüet, who was nspired by the clocks of the famous illusionist, Jean-Eugène Robert-Houdin.

Essentially, a mystery clock is one where the connection of the hands to the rest of the movement’s gear train are hidden, giving the visual effect of them floating in the center of a transparent dial, the mystery being ‘How the heck are those hands working?’ In fact, the hands of the mystery clock are not driven by the typical central canon pinion, but instead are fixed on two large sapphire disks that are driven by hidden text and gears. being placed on transparent sapphire discs and the discs are rotated on via teeth on the periphery of the dial by hidden gears.  Not too long ago, in 2013, Cartier brought the concept of mystery to new heights, unveiling the Mysterious Double Tourbillon movement wherein the tourbillon appears to be suspended in mid-air. It was a revolutionary piece snd game-changing in terms of technology. 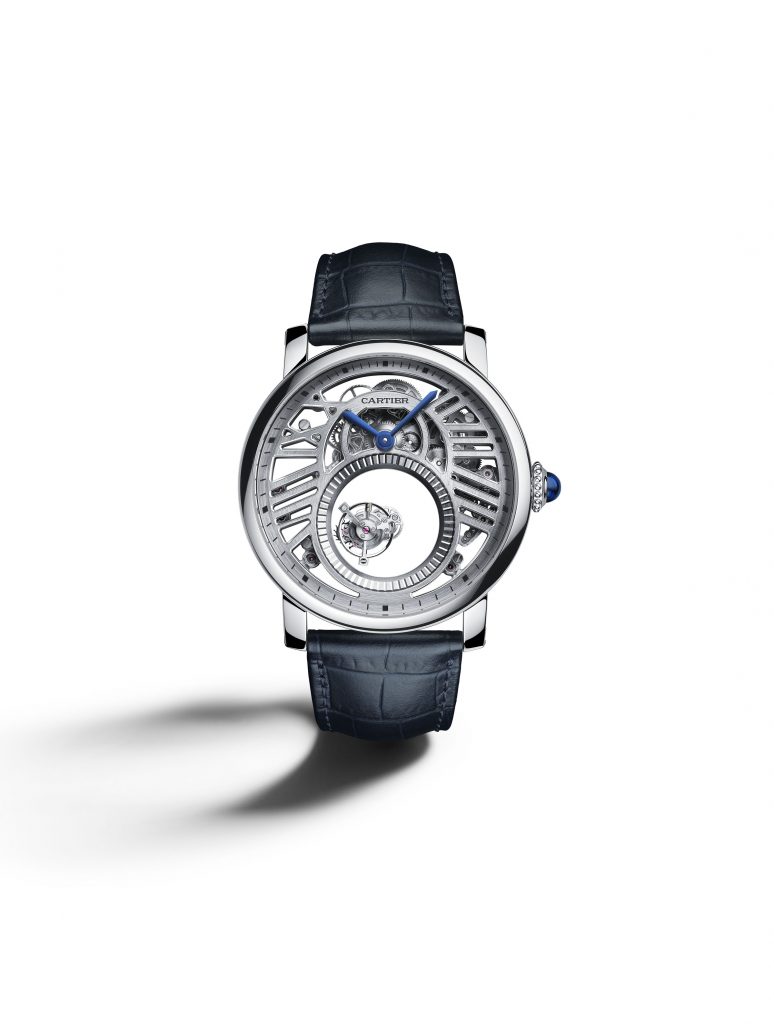 Now, Cartier unveils two new Mysterious watches that are guaranteed to have all eyes riveted on the wrist.  The Rotonde De Cartier Skeleton Mysterious Double Tourbillon watch, powered by the original 286-part caliber 9465MC (as used in the 2013 watch), is set to strike a number of visual queues. The flying tourbillon sits on a sapphire disc driven by gears that are partially concealed by the familiar skeletonized bridges that double  as radial roman numerals. The tourbillon rotates around the centrally mounted fixed wheel once every five minutes and around its own axis once every 60 seconds.

Crafted in platinum and measure 45mm in diameter, the Rotonde de Cartier Skeleton Mysterious Double Tourbillon watch carries the  ‘’Poinçon de Genève’’ certification.  It is finished with a blue alligator strap and created in a limited edition of 30 pieces. It is also available in platinum with bezel paved with baguette-cut diamonds. Without diamonds and as shown here, it retails for $216,000. 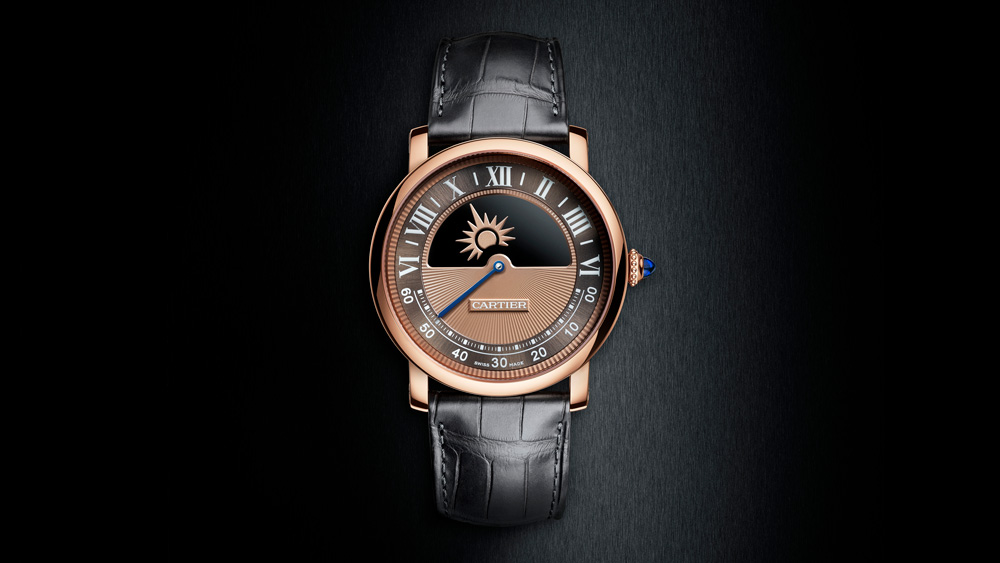 The other impressive new piece is the Rotonde de Cartier Mysterious Day and Night watch. This s an all-new mystery complication for the brand. Measuring  40mm in diameter and, housed in an 18-karat pink gold case, the watch is  powered by the Cartier Calibre 9982MC.  The mechanical movement with manual winding  offers a mysterious day and night indicator with a sun (or moon by night) with an extra long ray  that acts as the hour hand. It also offers a retrograde minute hand on the  bottom half of the dial. The movement consists of  174 parts and 26 jewels and beats at 28,800 vibrations per hour.  Water reistan to 30 meters, the watch is also available in white gold. It retails for $63,000. 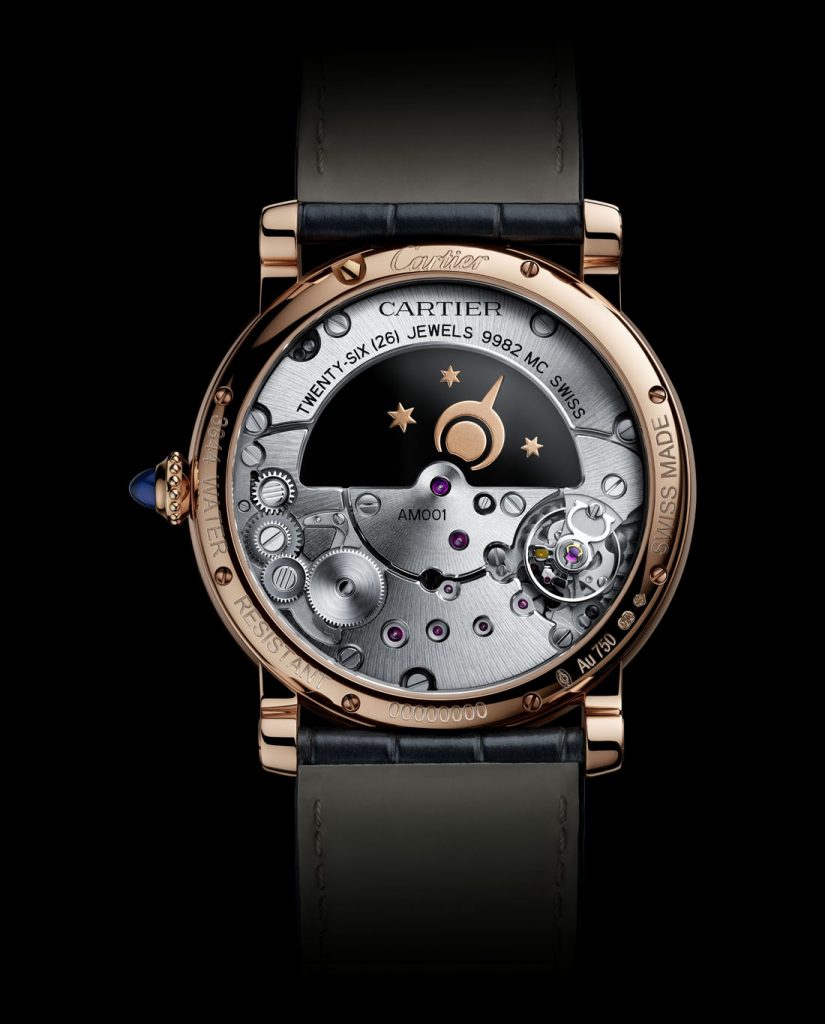 SIHH 2018: The Rotonde de CArtier Mysterious Day and Night is powered by the Caliber 9982 MC movement