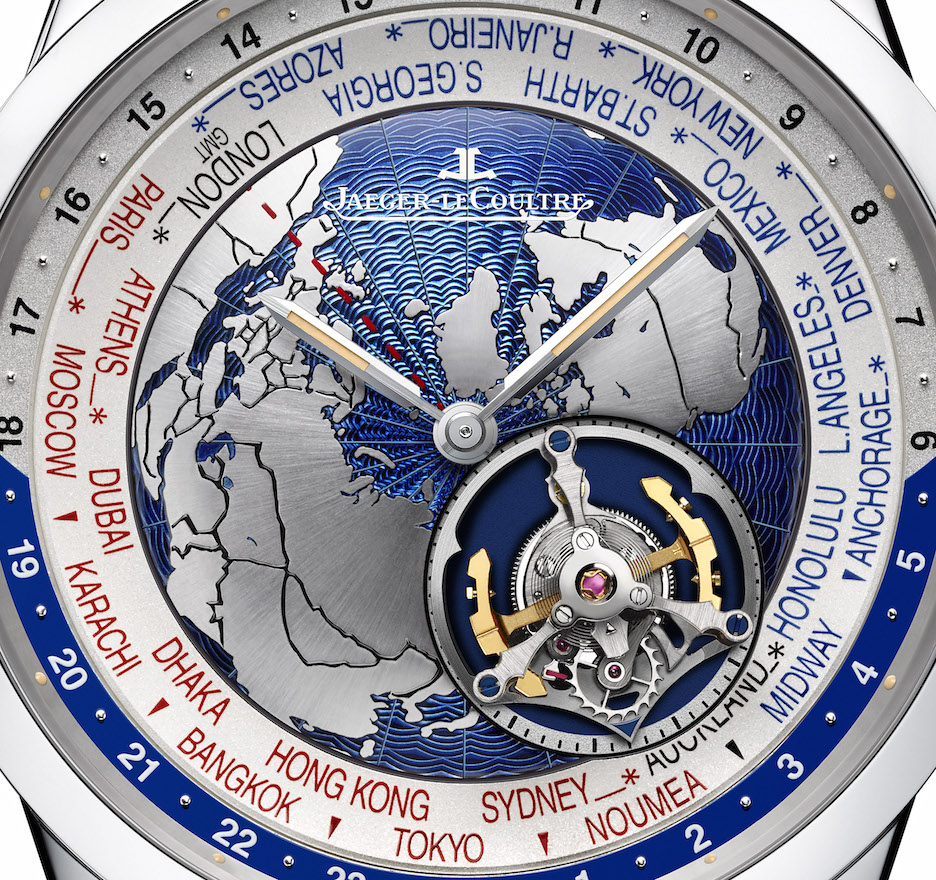 That noise you just heard was the thud of my jaw hitting the floor after seeing the new Jaeger-LeCoultre  Geophysic Tourbillon Universal Time. For SIHH 2017 Jaeger-LeCoultre is introducing a horological first:  a flying tourbillon inside of a universal timer. The latest from the manufacturer is a true horological work of art and you need to know more about it, so here we go…

The Geophysic watch has a storied history from the time the first one was produced in 1958 by Jaeger-LeCoultre in honor of the International Geophysical Year. Since then the first Geophysic watch remains a symbol of the manufacturers expertise. The Geophysic line was launched in 2015 which looks to offer a reinterpreted classic aesthetic by incorporating the original qualities: a generously dimensioned case, easily legible functions, visible luminescent hands, and the high- tech Gyrolab balance wheel. 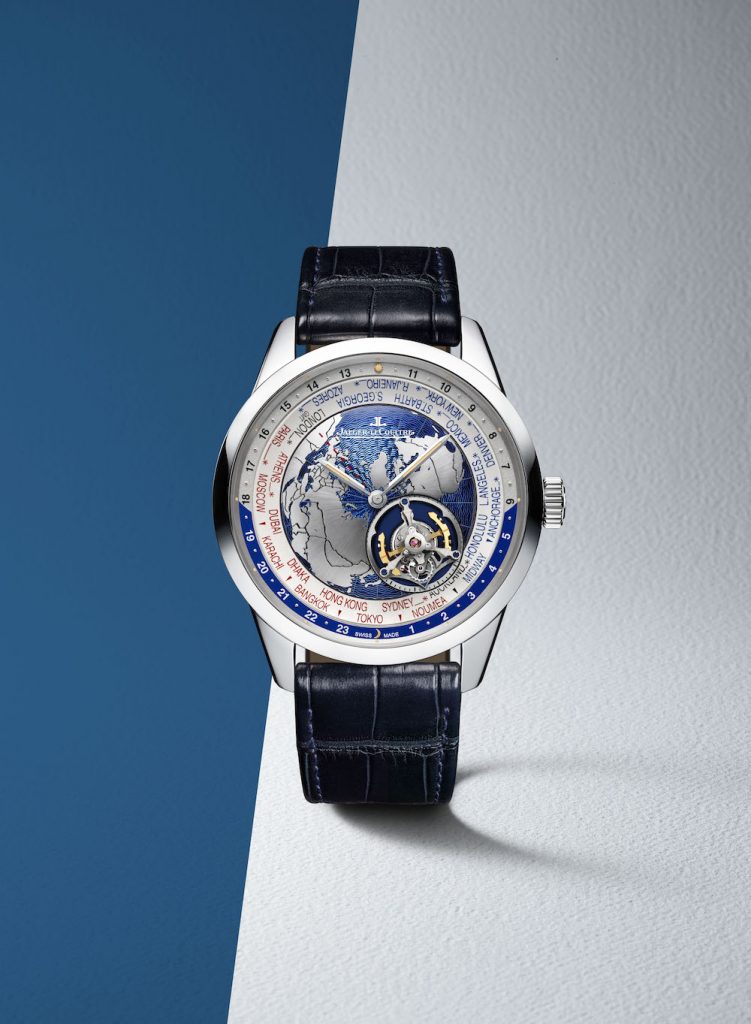 All functions of the Jaeger-LeCoultre Geophysic Tourbillon Universal Time are operated off of a single crown.

Limited to 100 pieces the Geophysic Tourbillon Universal Time allows for the time to be told in twenty-four cities around the world simultaneously. The complexity of the movement required for such an accomplishment is made even more compelling by how legible the dial is. The flattened world is displayed across the face of the watch in a stunning blue lacquered guilloche that those familiar with line will instantly recognize from the earlier iteration of the watch without the tourbillon. To tell the time on the world timer is relatively straight forward and follows the rules of most world timers. There is an inner ring displaying 24 cities and an outer ring that is a 24 hour display. You line the city up with the hour and you have the time in that region of the world.

The innovation of the piece is the prominently displayed tourbillon at the 5 o’clock position. Due to the size of the tourbillon you will notice that some of the city wheel had to be cut into in order to accommodate.  However, the other aesthetic qualities are sure to assuage any misgivings about the wheel. The lightly convex side view of the dial is meant to bring to mind the shape of a globe. The blue lacquered ocean has small spirals which form waves that add to the depth that the watch creates when viewed from above. The satin-brushed finished continents move across the central disc every 24 hours and follow the pace set by the flying tourbillon. If that weren’t enough, there is the Gyrolab balance wheel.  The balance spring is hand-crafted in the workshops of the Manufacture and features the shape of a watch anchor which is the symbol of Jaeger-LeCoultre. The case is housed in a 43.5mm platinum case with a height of 14.87. Subtle this piece is not, but you already knew that. It comes on a blue alligator strap which plays nicely with the aforementioned ocean on the dial. It retails for just about $145,000. 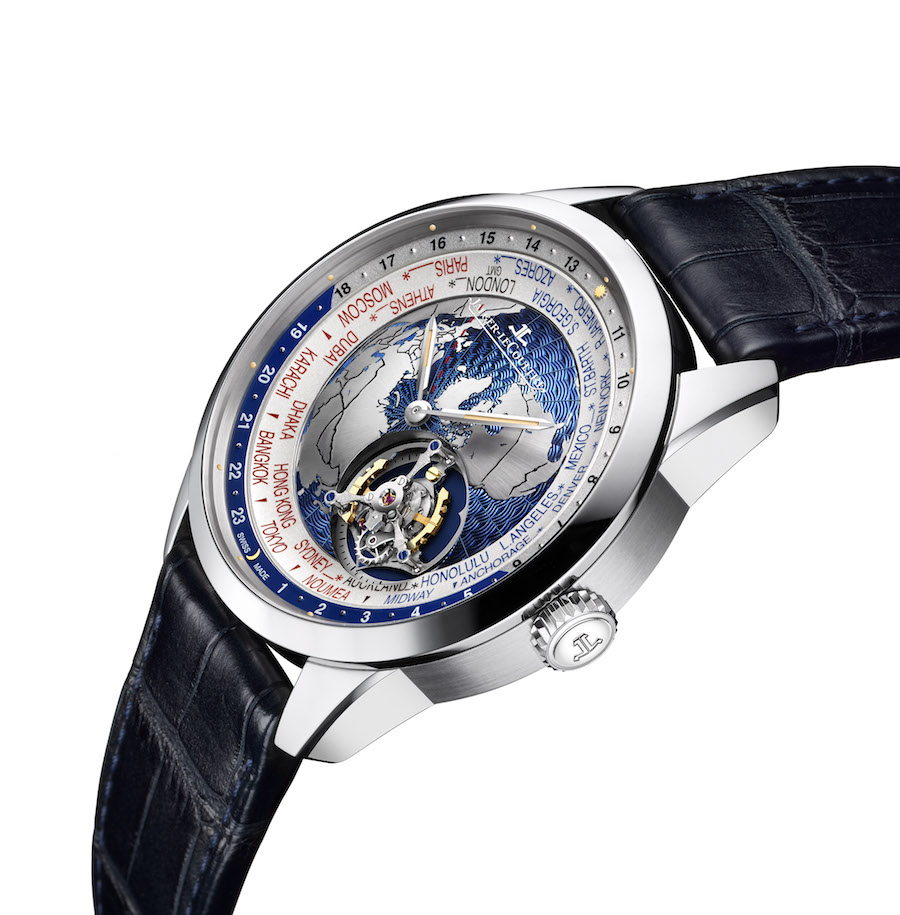 The movement of the Geophysic Tourbillon Universal Time watch consists of 375 parts.

The movement of the Geophysic Tourbillon Universal Time watch consists of 375 parts.