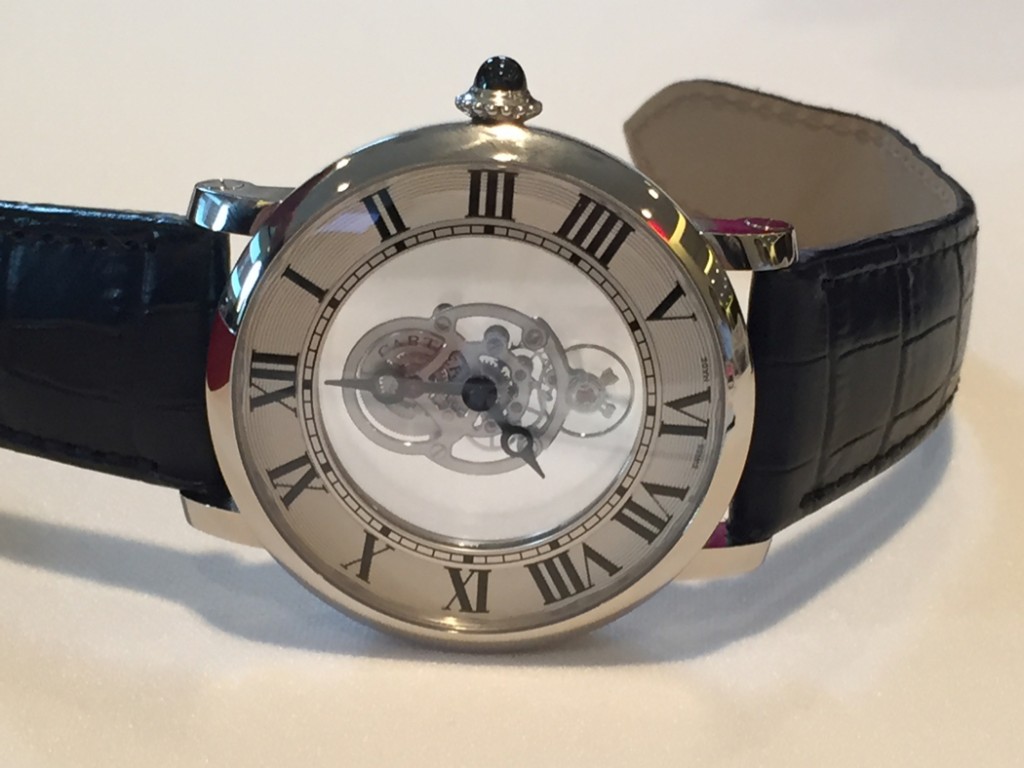 Cartier has long been a master of mystery clocks, creating famous see-through clocks for more than a century. These Mystery clocks showcased rock crystal and other clear materials for the dial so that the hands seem to float in space – telling the time without any apparent link to the movement.

While these clocks mystified people around the globe, Cartier further stunned the world when the brand’s expert watchmakers managed to miniaturize the concept to such a degree that it could be translated into a wristwatch. The Maison – the true “master of mystery” — continues to surprise and delight us with its deft blend of mechanics and mystery, of technology and beauty, at this year’s SIHH.

The new Rotonde de Cartier Astromystérieux Caliber 9462 MC comes on the heels of its predecessor watches (Mysterious Hour and Mysterious Double Tourbillon), but offers a new feat in a style only Cartier could achieve. The mechanical manual-wind movement, Caliber 9462 MC Astromystérieux complication, is entirely visible in the dial portion of the mystery watch — where typically only the hands appear. In this piece, the central tourbillon cage with four organs attached, seems to float in space.  Essentially from the crown to the display, we have the barrel, the main gear train, the balance and the escapement — all performing a complete rotation in one hour so the the hands, (on the escapement) make their 60-minute rotation around the dial to mark time. The watch holds three patents. 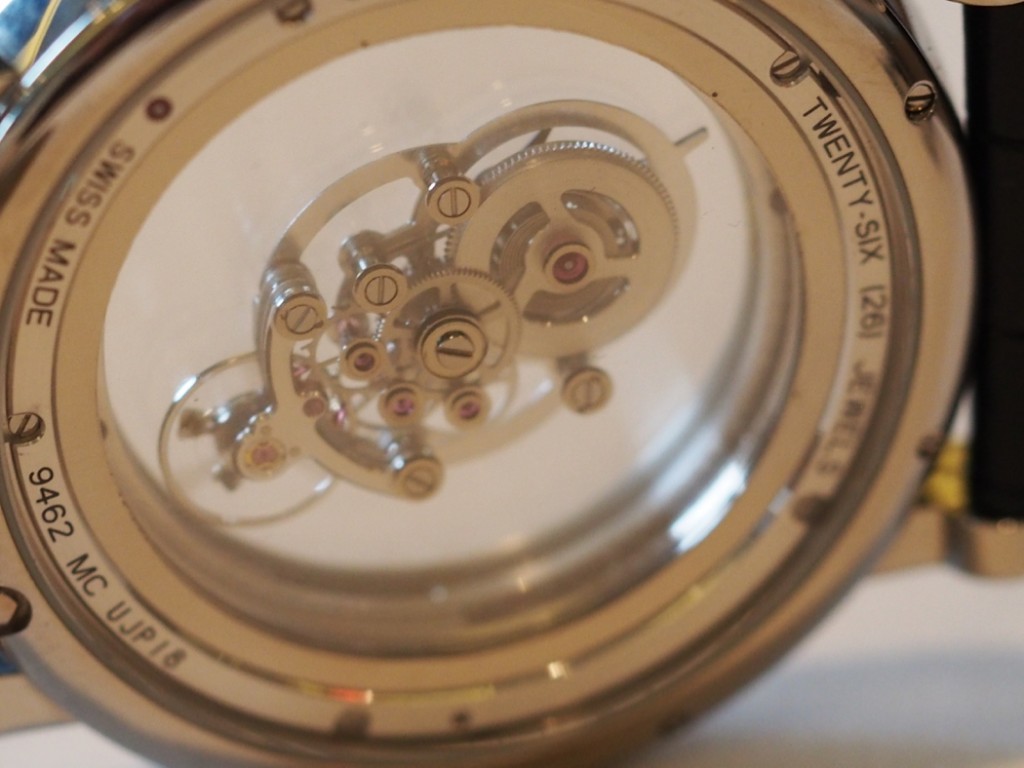 While it looks blissfully beautiful, this watch is easily one of the most complicated to build thanks to the central rotation with the axis of the watch’s hands attached to the escapement. From the outside looking in through the sapphire crystals, very little of the 408-part caliber (including 188 balls) is seen. Additionally, the space dedicated to the movement’s non-visible gears and components (beneath the tiny outer dial) has been reduced by Cartier’s master watchmakers to the barest minimum – offering a grand-scale work of art and technology. In fact, several patents have been filed for this complex caliber.

It is a bit difficult to explain, so we will take it step by step, but essentially – like any great building—it all comes down to architecture. The elongated shape of the central escapement (and barrel, balance, gear train) enables it to move around the dial once an hour, and resembles an elliptical trajectory that reflects heavenly bodies floating in space with no apparent connection.

One glance at the watch with its central, unattached, floating central tourbillon has people wondering: how is it wound, how is the time set, how does it work? 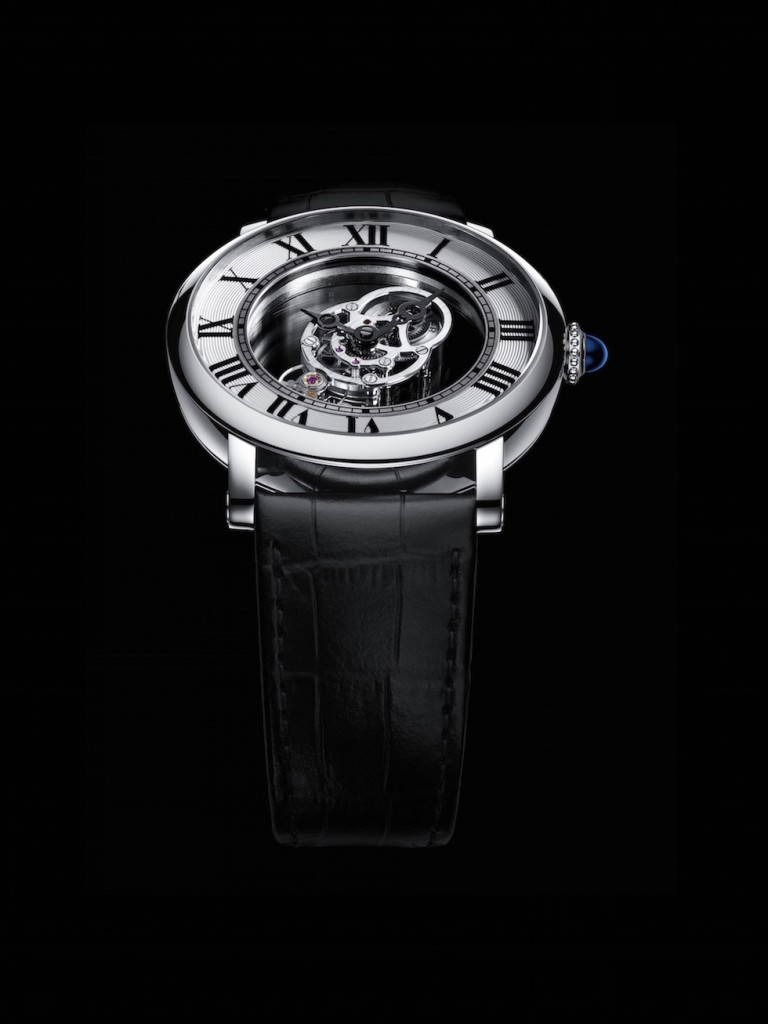 Just 100 pieces of theRotonde de Cartier Astromystérieux Caliber 9462 MC will be made, cased in palladium

First, the tourbillon. Much like a conventional tourbillon, the Astromystérieux holds at its fundamental base, a revolving cage driven by a fixed wheel connected to the barrel. However, the central rotation of the flying cage (that encompasses escapement, balance wheel, gear train and barrel) is the distinguishing feature here.

Four sapphire disks in the movement’s components allow for the elongated structure and the operation of the central tourbillon. The lower bridge of the cage is a sapphire disk, which is held together with two upper bridges that have the balance wheel, escapement, gear train and barrel in tow. The rotating cage indicates the minutes and so dictates the rhythm of the rotation of the entire ellipsis once per hour.

Not only the architecture off the movement ingenious, but also putting it all together as a mysterious watch is, quite simply, minds blowing. Three sapphire discs are used herein: one (linked to the tourbillon disk) to indicate the hours; one that is used to implement the patented winding method (in conjunction with the crown) of the watch; a lower one that plays the dual role of providing the motion to make the tourbillon cage turn and of engaging the patented time setting system when the crown is pulled out. 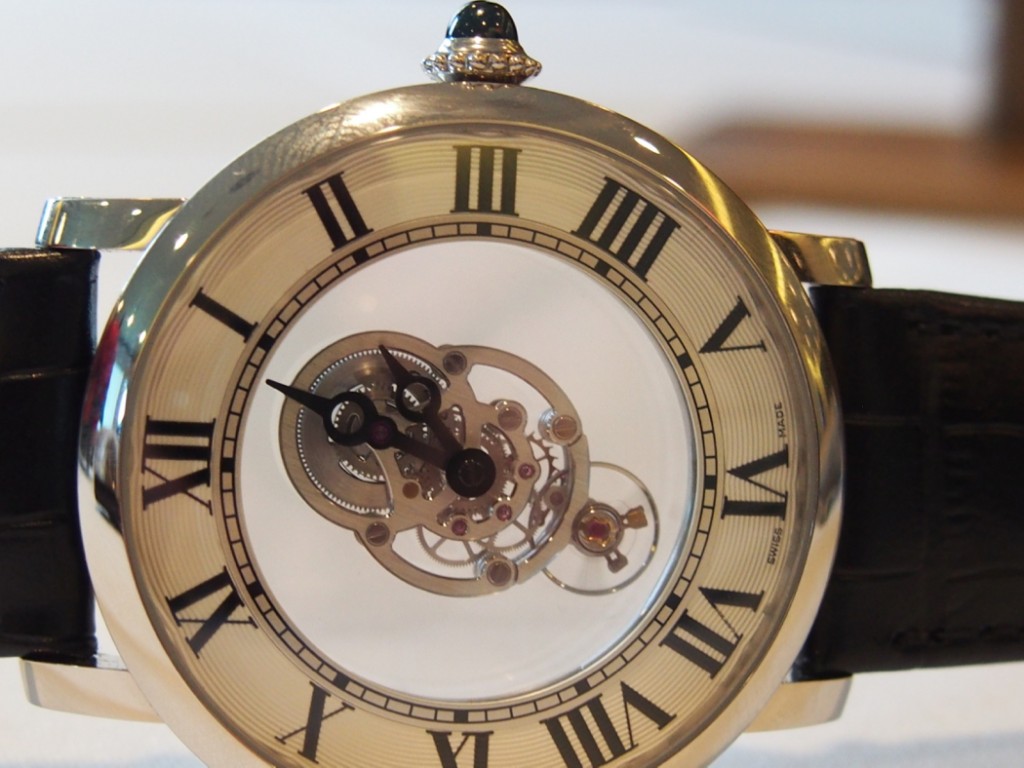 The non-visible parts of the 408-part movement are relinquished to areas behind the outer guilloche dial. (photo R. Naas)

As if the aforementioned patented time-setting dual-action disk were not enough, the entire system is made possible thanks to a revolutionary new lever that blocks this sapphire disk during normal watch running. Developed by the great minds at Cartier, even this lever   holds a patent application.

The watch also required the development of a specially made gear train, a new shock absorption system and a new winding concept that uses a floating pinion to form the necessary connection with the winding disk when needed. Additionally, a disconnect system has been created so the crown’s winding shaft and barrel are protected from breaking in case of over winding.

The incredible technology is all housed inside a 43.5mm 950/1000 palladium case that has a thickness of just 12mm. Just 100 numbered pieces will be made. There will also be diamond-adorned versions. Be still my heart. 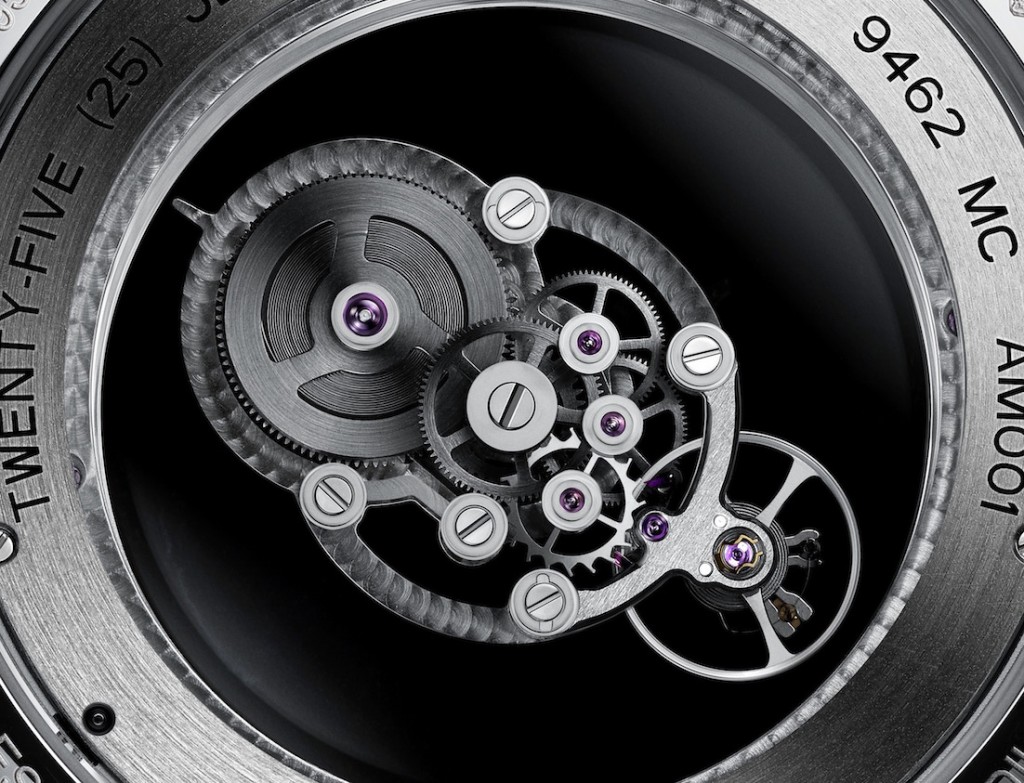 A close up look at the mysterious watch barely even reveals the sapphire disks.