Riskers On Kickstarter: The Watch Design for Bravery 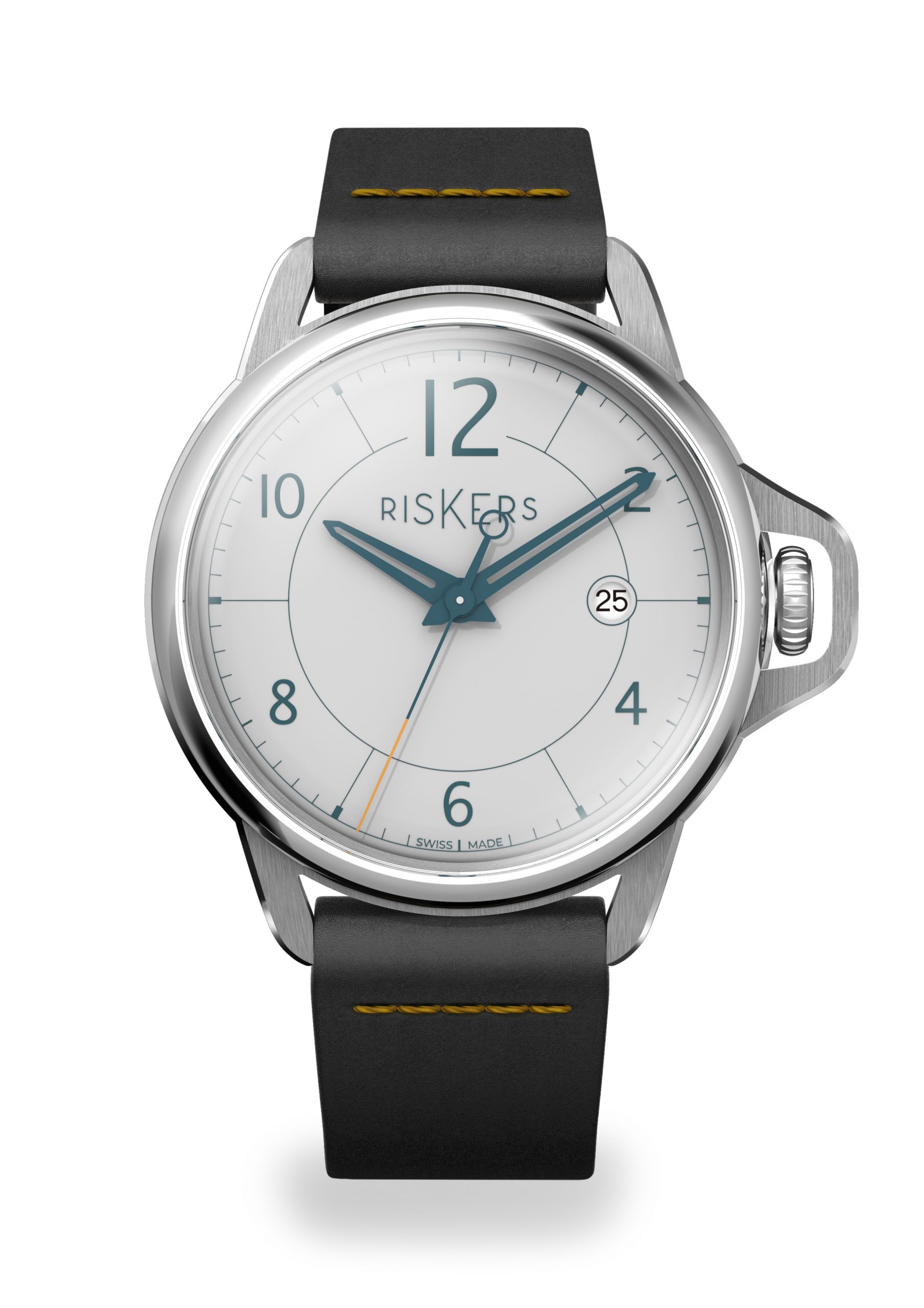 Earlier this year at Baselworld, I had the good fortune of spending some time in the “Incubator” hall – a place where a host of young brands showcased their watches and even their concepts.  Several articles stemmed from my meetings there, as I was intrigued by a host of brands. One of them is Riskers, a new company that bills its watches as “Design for Bravery.” Its watches are currently being offered on Kickstarter — but only until December 1. Read on to find out more.

When I saw Riskers, the brand hadn’t yet burst onto the scene. In fact, the French brand made a huge statement this month by offering four watches for pre-order on Kickstarter.  The brand got way more response – and funding – than it ever expected. That’s because the concept and the design are different and somewhat off the beaten path. 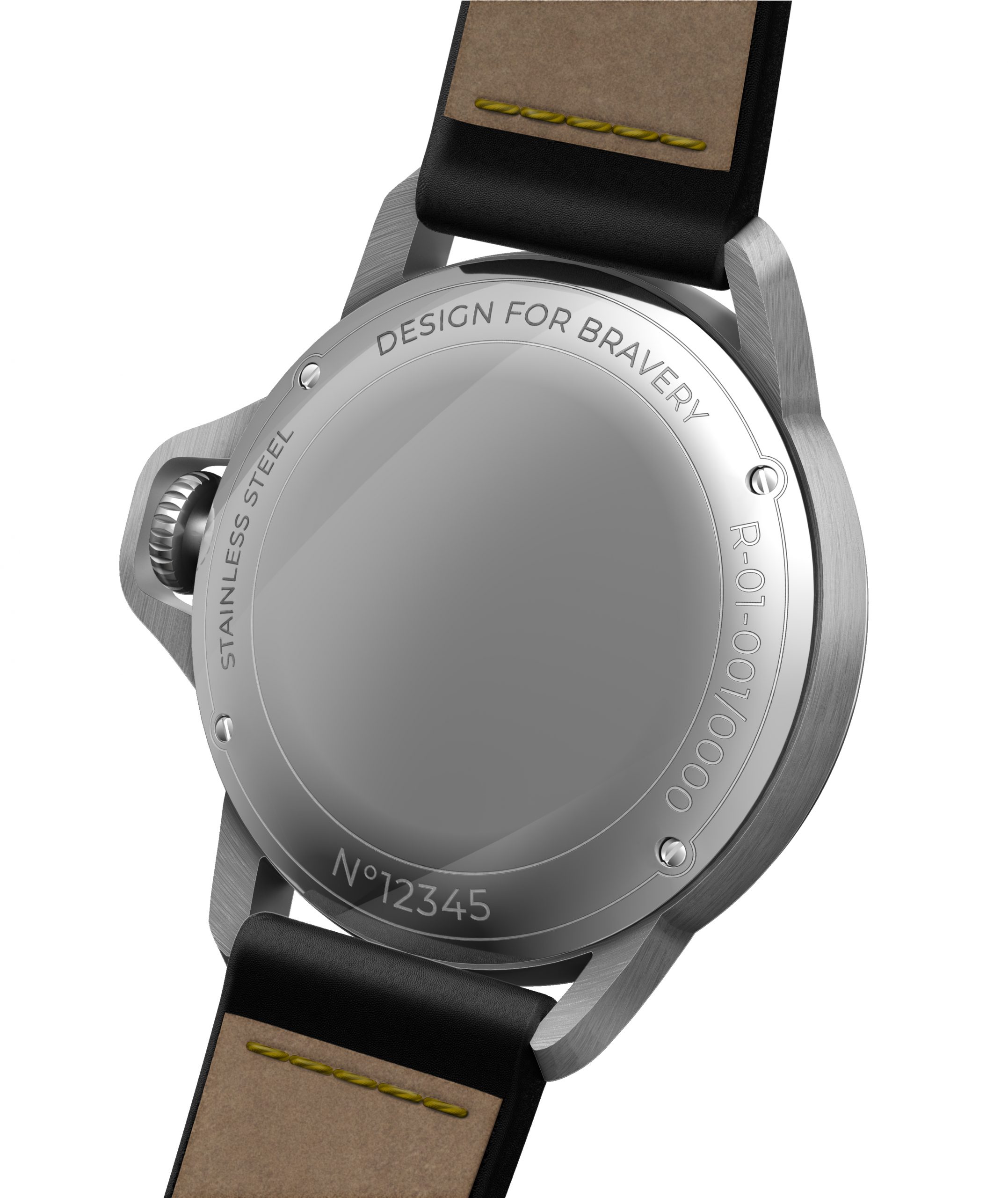 The back of the Riskers Chapter 1 watch is perfect for engraving.

Inspired by people who take risks to save others – including mountaineers, military personnel, first responders and more – Riskers is offering value and affordability to mainstream customers.

“There are still great men, ordinary citizens, whose acts of courage or dedication in the service of others, inspire us and give us confidence in the future,” says the manifesto describing the brand. Riskers was designed to honor ordinary people who do extraordinary things.  According to  one of the co-founders of Riskers, the company builds its watches on three principles from the trenches: accessibility, bravery and altruism.

The design of the watches focuses on shape and finish, as well as aesthetics. Of the four lines offered on Kickstarter, three are produced in limited editions and the fourth is a numbered series. They are all inspired by the pocket watches of the First World War – a time when it was realized that a wristwatch would be so much more valuable than a pocket watch. 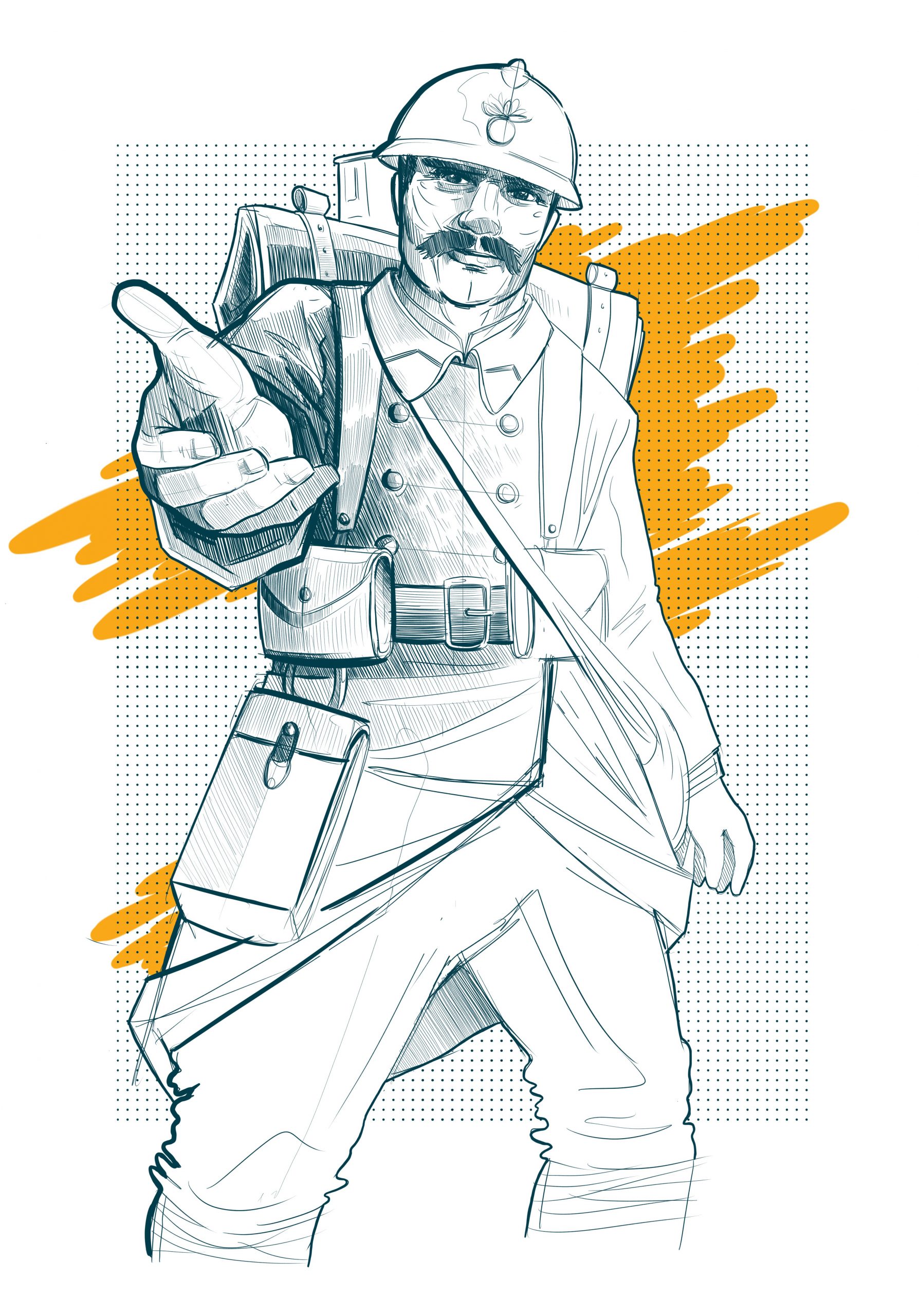 Riskers is inspired by history and by courageous people. (Image by Malo, artistic director of the brand)

According to Riskers, the case shape was selected to resemble a pebble, but with a reduced bezel so that the dial and crystal had a more modern appeal.  The watches measure 43mm in diameter and feature high polished finishes. All of the watches also feature the original “bow” of the pocket watch (where it is attached to a chain), as a nod to the past.

There are both automatic and quartz versions. The automatic watches house STP1-11 movements with a power reserve of 44 hours, a central second hand and a date indication at 3:00. The quartz watches are powered by Rhonda 715 calibers and also have a central seconds hand and date at 3:00. 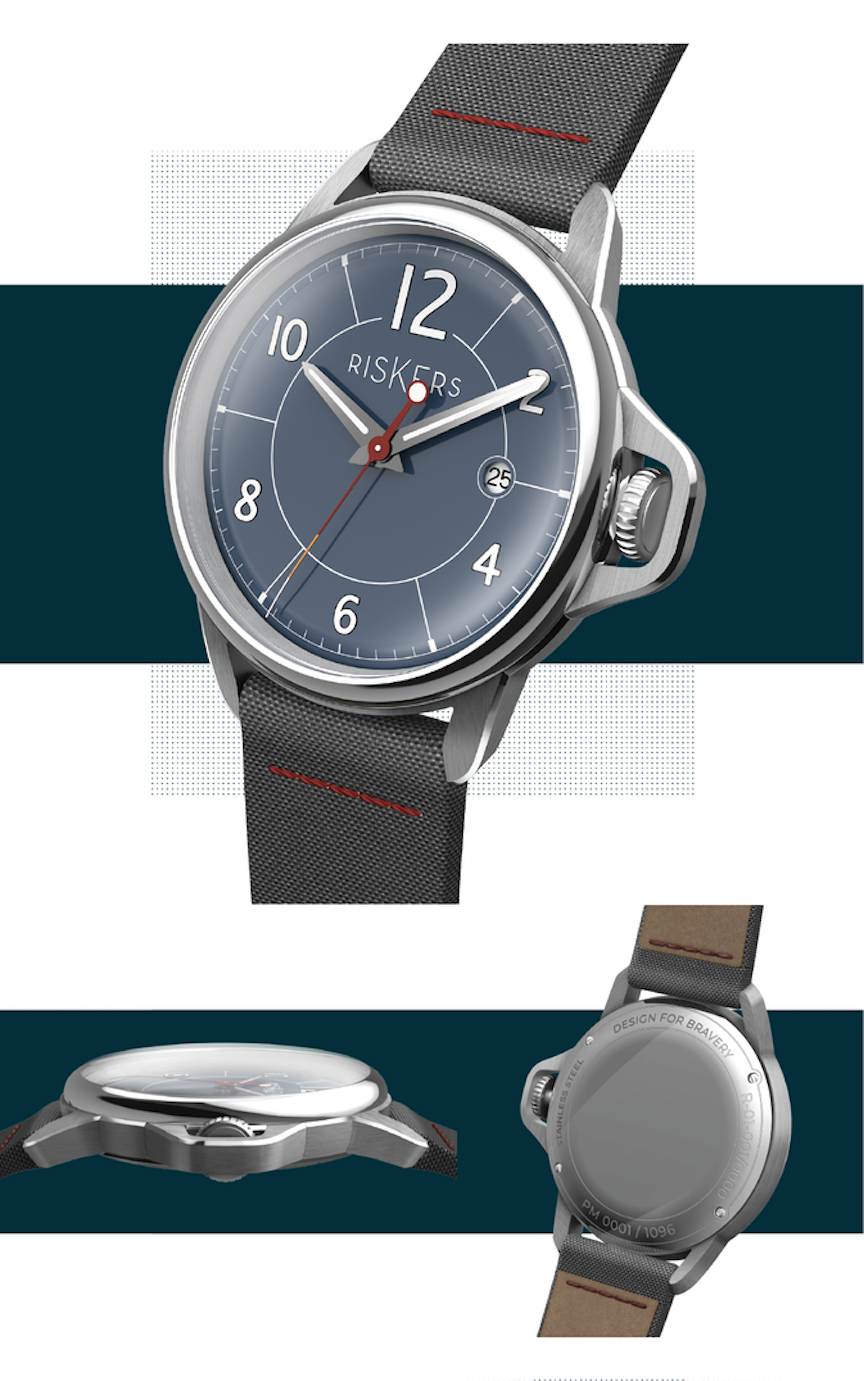 Each model has some vintage appeal, as well. And each is inspired by a man from the past who went above and beyond his calling.  Each also has a charitable side, with portions of the sales of each line going to support different causes. The Prolog 1, for instance, pay tribute to Albert Roche and will raise funds to finance social work that helps veterans and war widows. 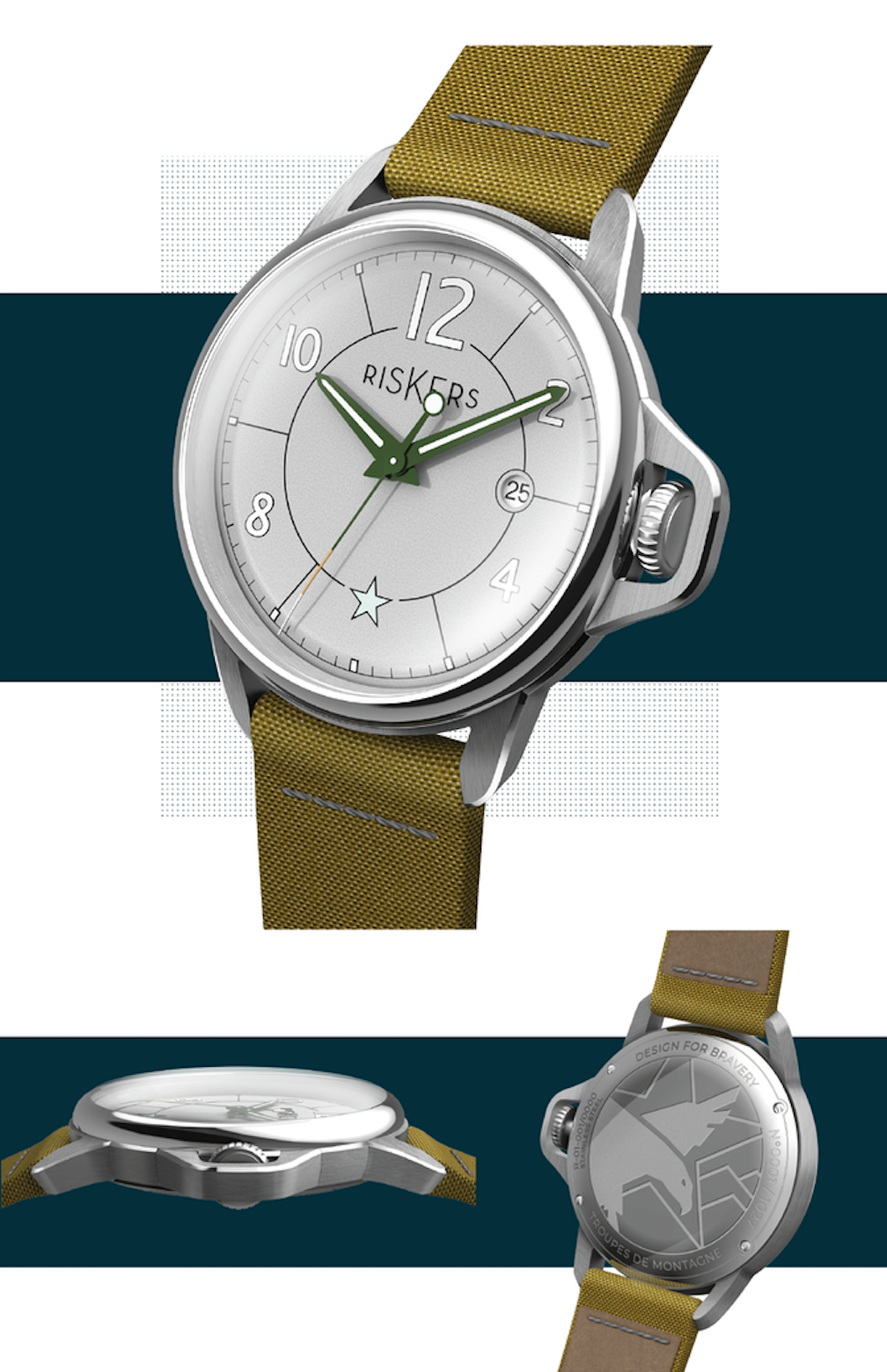 The Chapter 1 with gray dial in a light satin finish, this watch honors Guillaume d’Aboville and his career choice to help those less privileged. Its sale supports the Children of Mekong effort. Chapter II is the result of collaboration between Riskers and a military brigade – The Mountain Troops.  It has a sandblasted dial to recall rock and features a glacier blue star at 6:00 to represent the North Star.

Finally the Chapter III, a watch with intense blue dial, pays tribute to Pierre Muller’s commitment to Pain Without Borders.  Its colors recall the Civil Security helicopters that he uses for his work as a doctor.

These four ambassadors and their causes are behind the initial roll out of Riskers. In a very short time this month, as of November 25, the brand raised funds that exceeded its targeted budget by 406 percent. While more than 200 watches have been sold, you can still buy your Riskers watch – with a 35 percent discount – until December 1, and then on the brand site until December 15. 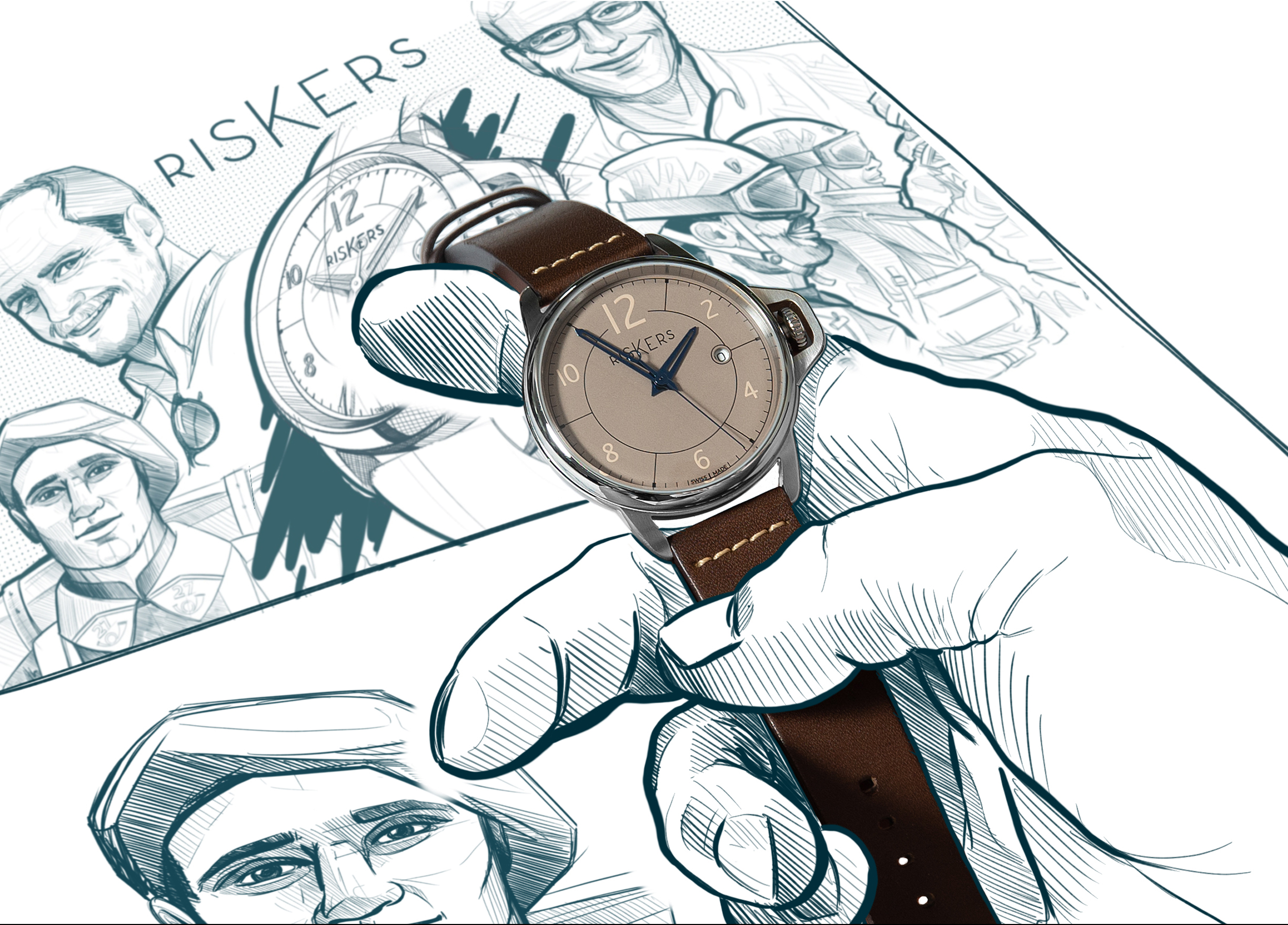 Visual communication program for Riskers is an attempt to associate sketches and drawings with real pictures. (@ThierryGenand)