INDIANAPOLIS, INDIANA – MAY 26: Simon Pagenaud of France, driver of the #22 Menards Team Penske Chevrolet celebrates after winning the 103rd running of the Indianapolis 500 at Indianapolis Motor Speedway on May 26, 2019 in Indianapolis, Indiana. (Photo by Chris Graythen/Getty Images)

This past weekend, the 103rd Indy 500 was the hot topic. Several watch brands sponsor races, or have race car drivers on their roster of brand ambassadors. Such is the case with Richard Mille, who came out on top when French driver Simon Pagenaud — also a Richard Mille brand ambassador — won the Indianapolis 500. It marks the first tim a Frenchman has won the legendary American race since 1920 when Gaston Chevrolet took the top spot. 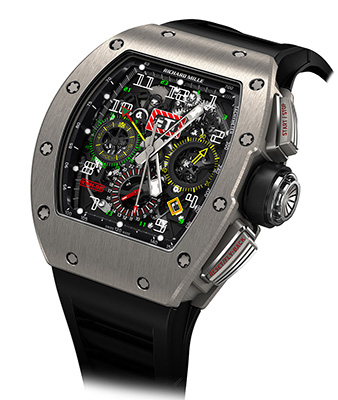 The race took an incredible turn on the 178th lap when former Indy 500 winner, Alexander Rossi, took first place ahead of Simon. At the same time, several cars hit the wall in turn three and the red flag was raised until the 187th lap. Pagenaud immediately put pressure on Rossi to take back the lead at the first corner from the outside. The two were neck in neck, racing to be first for the finish.  Pagenaud regained his No. 1 spot for the final time in the third turn with just two laps to go.

Pagenuat wears the titanium Richard Mille RM 11-02 Automatic Dual Time Zone watch in every race. even when driving. Just the case alone of this watch was more than a year in the R&D stages and requires  68 different stamping operations   for the three main components (bezel, middle section and case back). It is a flyback chronograph with dual time zone indications.  It retails for $162,000.

“This is a childhood dream come true, a lifelong goal. It’s hard to absorb what just happened. I had a fantastic car, and I really felt in control the whole race. It’s amazing how the stars sometimes line up just right. This day is etched into my memory forever,” said Pagenaud.