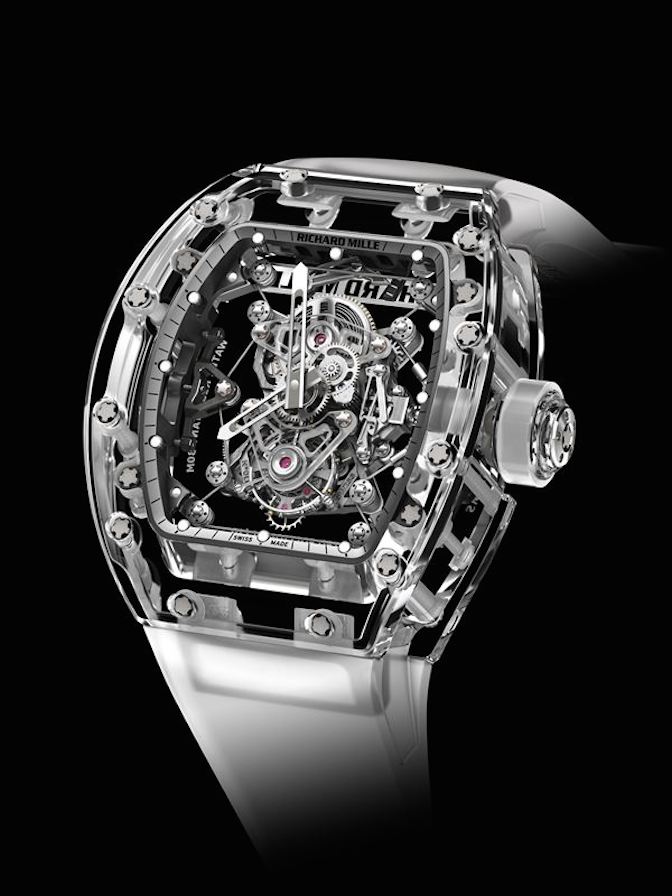 For Richard Mille 2014 as a year in which he is swinging for the fences. There have been a number of updates and limited edition variations of his most popular references released this year. Two versions of RM011 Flyback in stylized red and white color variants, a new version of the Rafael Nadal RM 35-01, an updated Bubba Watson Golfer’s Tourbillon, and the RM 30 Le Mans Classic are just a few examples.

In the immortal words of Jocabim Mugatu: “Richard Mille, he’s so hot right now.” Seriously, Google Richard Mille and 2014, you will be blown away with just how many high-end pieces he has been able to produce in such a short time.  Continuing the tour de force, one of our favorites is the Tourbillon RM 56-02 Sapphire. Sadly it is created in a limited edition of just 10 pieces!  The RM 56 was originally unveiled three years ago and was designed around a theme of transparency. The initial iteration was a Tourbillon split second chronograph housed in a sapphire case. This was the very first time a case of pure sapphire was used for watch with the aforementioned complications. The follow up, RM 56-01, raised the bar by featuring a baseplate, bridges and third wheel all created from sapphire. 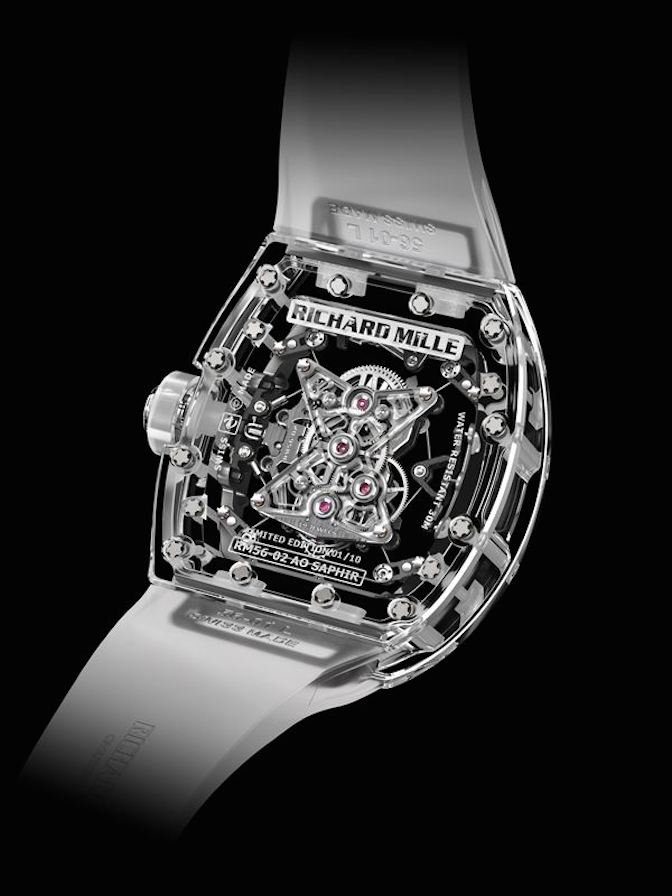 The back of the transparent RM56-02

Being officially unveiled at the Watches & Wonders event in Hong Kong, the RM 56-02 features a new movement that takes its cues from the Rafael Nadal RM 27-01 and its cable suspended movement. For the RM 56-02, Mille is looking to continue the theme of transparency while at the same time evoke the feeling of weightlessness. The base plate, finished in in grade 5 titanium, is completely suspended by a single braided cable woven through a system of 4 pulleys at the case’s corner, as well as through another 6 pulleys along the along the movement itself. The tension of the cable is controlled by a miniature ratchet at 9 o’clock, and the cable unit in its entirety is attached to an indicator at 12 o’clock that lets the wearer visually inspect the cable tension to ensure optimal operating of this ultra-mechanical watch.

The transparency theme is further evolved as Mille has incorporated new design elements to the sapphire movement parts of the winding barrel bridge, tourbillon and center Barrel Bridge. The three-part sapphire case is milled from solid blocks of sapphire and ergonomically curved to best conform to the contours of the wrist. As many of you already know, sapphire is extremely scratch resistance and has a hardness of 1800 Vickers and ranks a 9 out of 10 on the Mohs scale, which is a step below diamonds. Thus, to properly shape the sapphire, 40 days of continuous machining is necessary. That’s the same amount of time Noah needed get back onto dry land. The watch comes on a translucent Aerospace Nano strap, which, as the name suggests, uses nanotechnology to produce a material that had an organic feel and is silky to the touch. The RM 56-02 is not for the faint of heart and will cost $2 million. In case you were wondering, the watch is water resistant to 30 meters and perfect for a swim at your local county club. 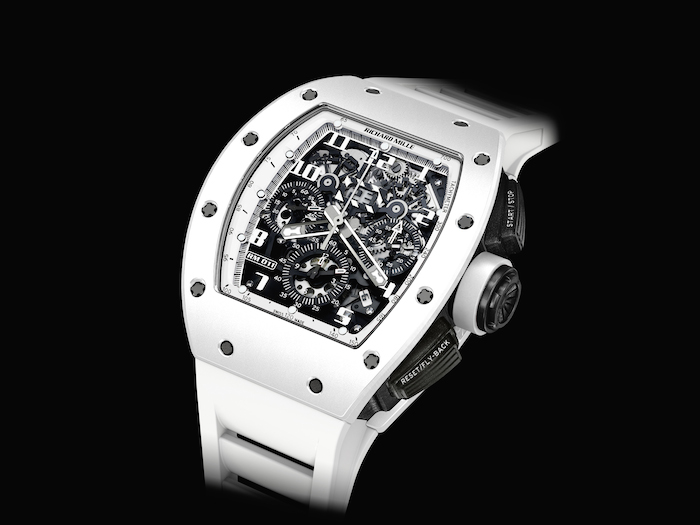 Also new this year from Mille is the stunning  Americas-only White Ghost. The RM 011 Automatic Flyback Chronograph White Ghost is created in a limited edition of just 30 pieces. Like a negative of the previously released Black Phantom, the White Ghost is created of high-tech materials. The tripartite case is white ATZ ceramic and the  center caseband is crafted from North Thin Ply Technology (NTPT) carbon used in aerospace and  Formula 1 racing.  The watch, with skeletonized automatic winding movement and adjustable rotor geometry, offers a 60-minute countdown timer, 12-hour totalizer, annual calendar and oversized date and month.