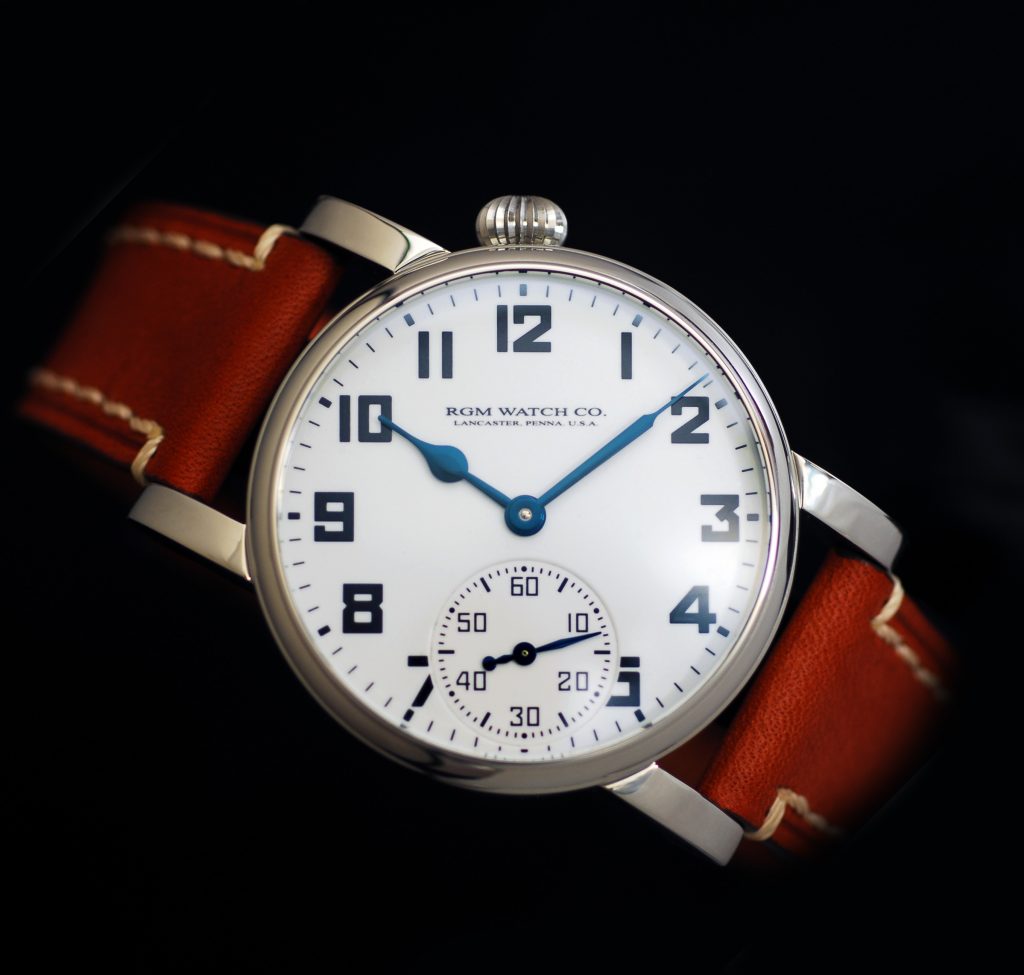 Last month, Roland Murphy of RGM watches sponsored a 25th anniversary event at the RGM workshops in Mt. Joy, PA, where guests toured the factory, as well as the nearby NAWCC museum, and were treated to the unveiling of the newest watches made by RGM for the brand’s anniversary. The event was highly attended on both days. Last week, RGM brought those anniversary watches to WatchTime New York, and here we bring you a close-up look.

Taking inspiration from the 801  caliber,  the fourth in-house-made movement from RGM is the 801SW-COE with a center sweep second hand and a newly developed minplate to accommodate that center seconds function.  Whereas most center second movements are equipped with a wheel that is friction fit onto a pivot from the third wheel coming through the bridge, the RGM 801SW caliber combines the third wheel and the sweep drive wheel on the arbor – sitting under the bridge. This double wheel system eliminates the friction wheel method and, while it requires more components and longer assembly, it is a more reliable construction that makes servicing of the watch in the future easier.  RGM 801SW-COE features large blued steel center seconds hand against a white Grand Feu enamel dial. The 42mm watch is  crafted in brushed 316L stainless steel with sapphire crystal and case back, and a  vintage-looking brown leather strap. It retails for $10,900. 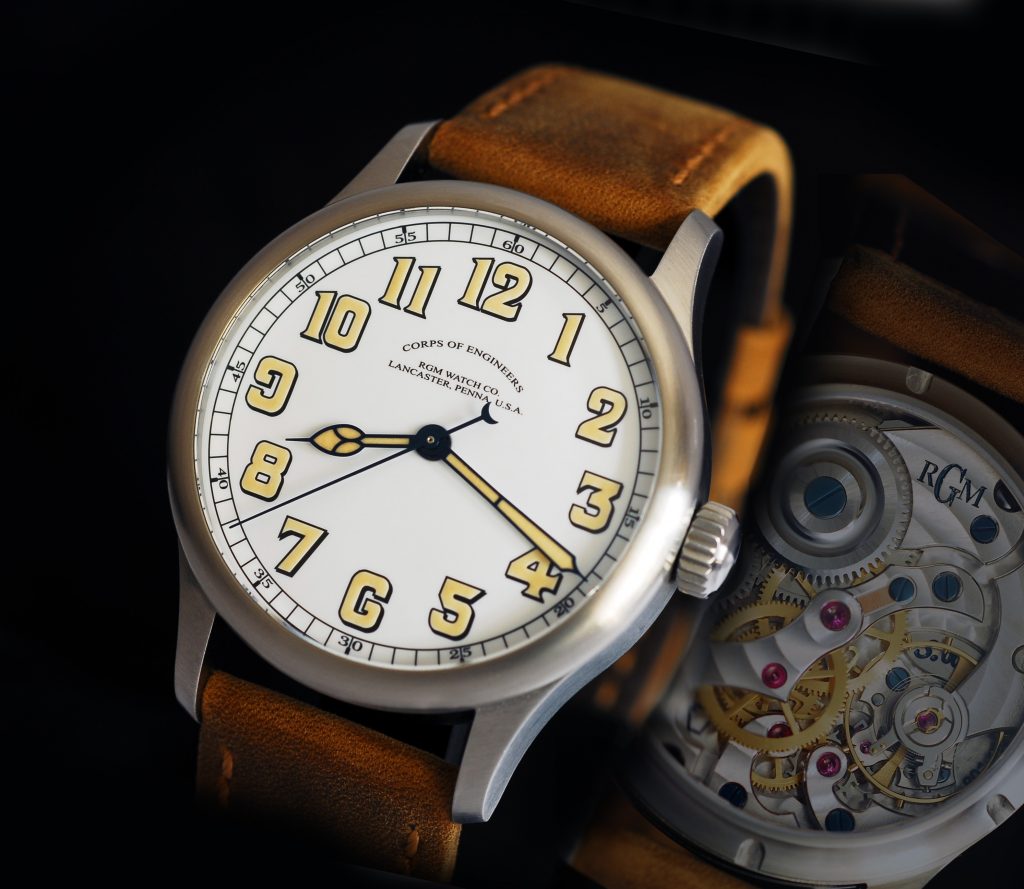 RGM 801SW-COE watch with sweep seconds and re-configured mainplate. Made in America.

Vintage themes run strong this year with the RGM line up. The  Model 222-RR (Railroad), for instance, is inspired by a watch of a century ago. It features a round dial with the 12:00 position offset at 1:00. Additionally the crown is offset at 1:30 on the 41mm stainless steel case. Inspired by the Boxcar style American railroad watches, this piece features a  railroad-themed Grand Feu enamel dial with blue outer minute track, and subsidiary seconds  at 6:00 with blue numbers and markers,It is powered by a restored Hamilton movement: either the manual wind Hamilton 921 or 923 calibers — each rebuilt. The RGM Model 222-RR retails for $5,900 with the 921 movement, and for $7,900 for the 923 caliber, which was made in limited numbers of less than 4,000. 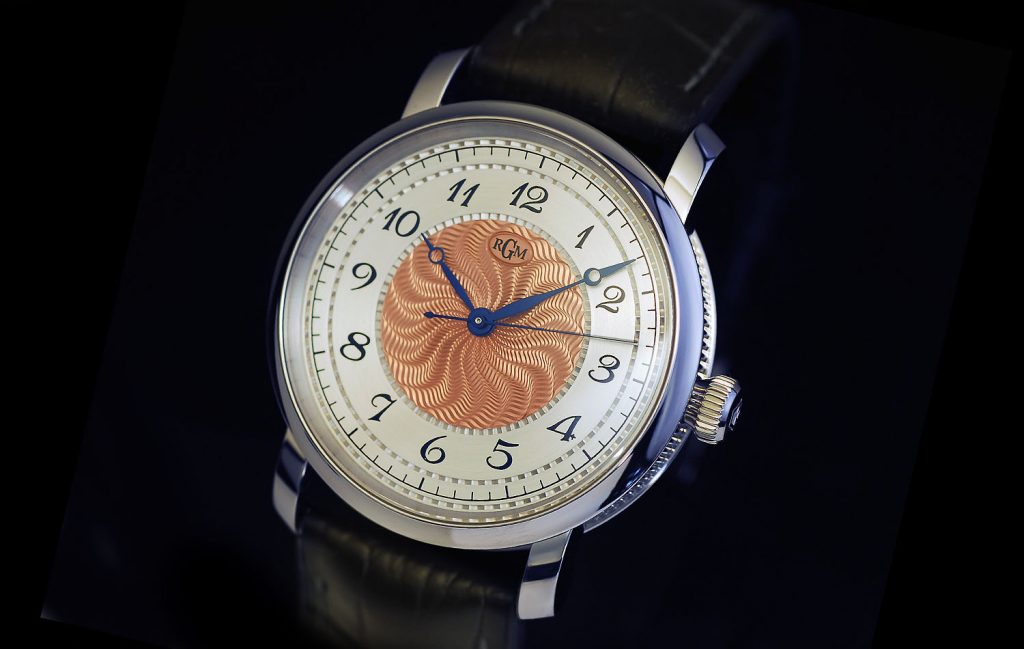 RGM’s Model 25 in copper moire is one of the brand’s 25th anniversary watches.

Always adhering to the notion of classic elegance, RGM also unveils one coin-edged piece: Model 25. The  40mm watch has a hand-cut center dial motif that is  engine-turned by hand in the RGM workshops. Each dial is   unique because each is made by hand individually. The Model 25 watches are offered with different guilloche patterns  in a variety of metallic galvanic colors including copper, blue and silver.The stainless steel cases are made in America, and the movements are Swiss ETA 2892-A2 automatics calibers. The RGM Model 25 retails for $6450.

These watches join the RGM Chess watch that was unveiled earlier this year, and that we wrote about here.  When we asked Roland Murphy which anniversary watch is his favaorite, he replied, “It’s like your children, so I would never say this is my favorite.” He then expounded, “I like them all for differ reasons.  The 801SW-COE, because of the cool way we did the sweep second, the Model 25 because of the smaller ribbed side case we make here in the USA and our beautiful engine-turned dials, and the 222-RR because of the different look it has with the crown at 1:30 and the movement turned in the case, not to mention the historic Railroad theme and real enamel dial.”

Which is your favorite?