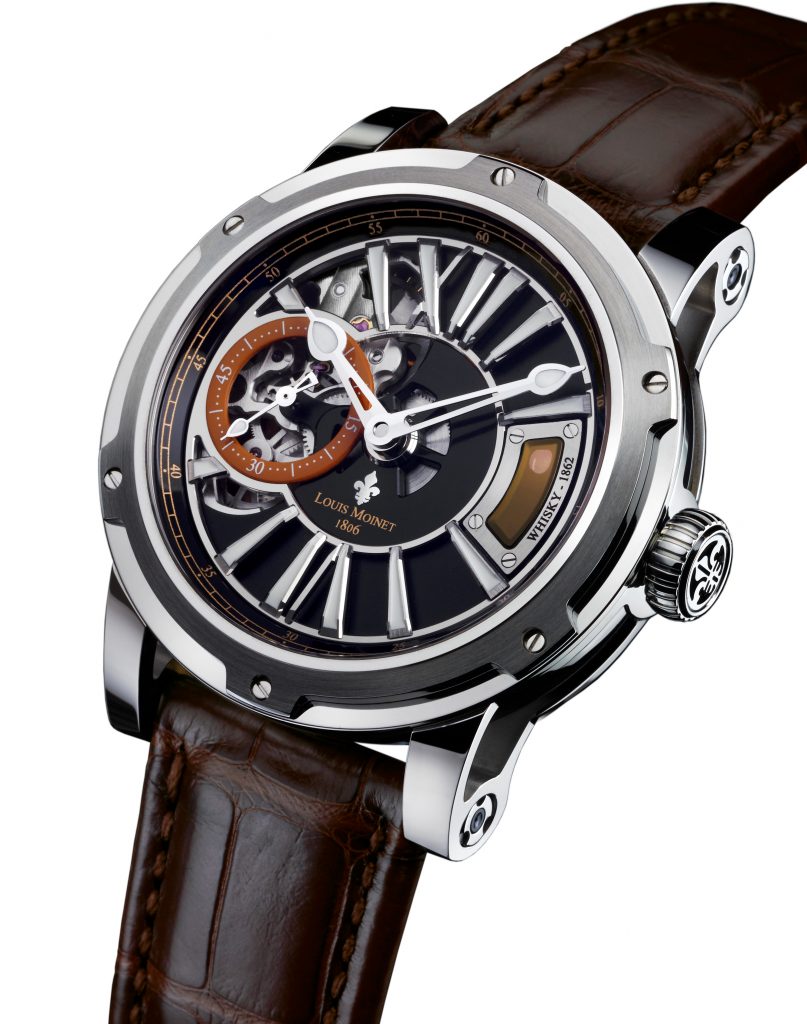 Just 50 pieces of The Whiskey Watch by Louis Moinet and Wealth Solutions will be made: 40 in steel; 10 in rose gold.

This won’t be the first watch someone may rather drink than wear. This weekend at the Singapore Yacht Show, Wealth Solutions and Louis Moinet Swiss watch brand unveiled The Whiskey Watch – with tiny droplets of the oldest whiskey in the world tucked inside a miniature tube and placed beneath a crystal at 3:00 on the dial. Wealth Solutions, an expert in helping discerning clientele build rare art and spirits collections, procured the rare Old Vatted Glenlivet 1862 whiskey from Sukhinder Singh, British Collector of rare alcoholic beverages. 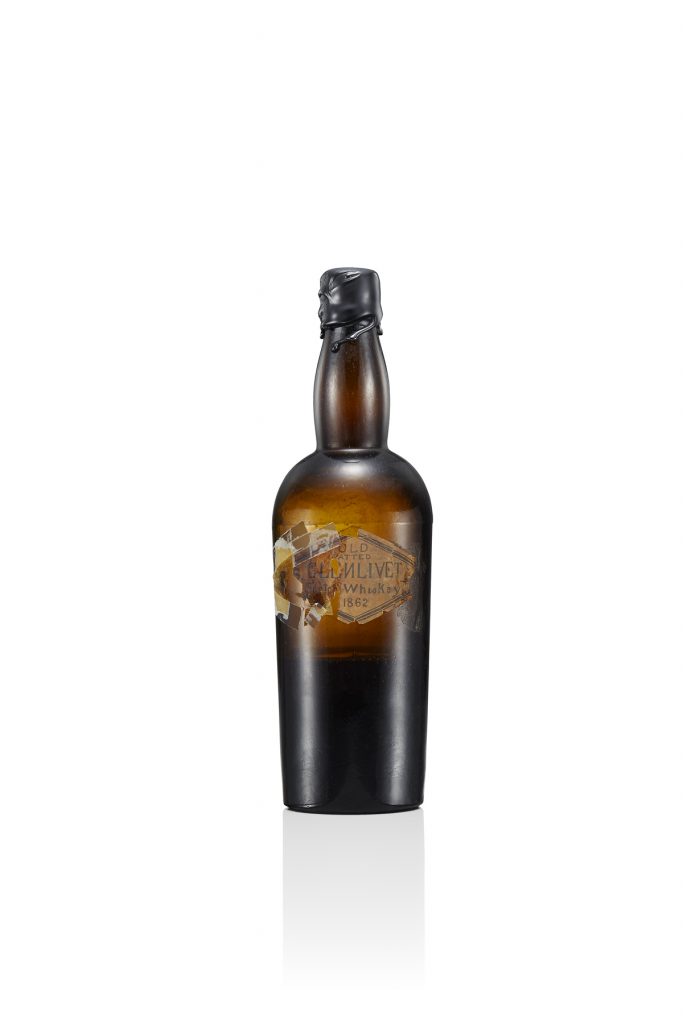 The Whiskey Watch is based on Louis Moinet’s recently released Metropolis timepiece, and is designed and manufactured in-house by Louis Moinet, inventors of the chronograph. The three-level dial is intriguing in and of itself, but now with the exclusive whiskey capsule at 3:00, the watch is ever more alluring. The Whiskey Watch is powered by the LM45 automatic movement. Sadly, just 50 pieces will ever be made. It is being offered in stainless steel (40 pieces) for 18,000 Swiss Francs and in 18-karat rose gold (10 pieces) for 46,000 Swiss Francs.Stainless 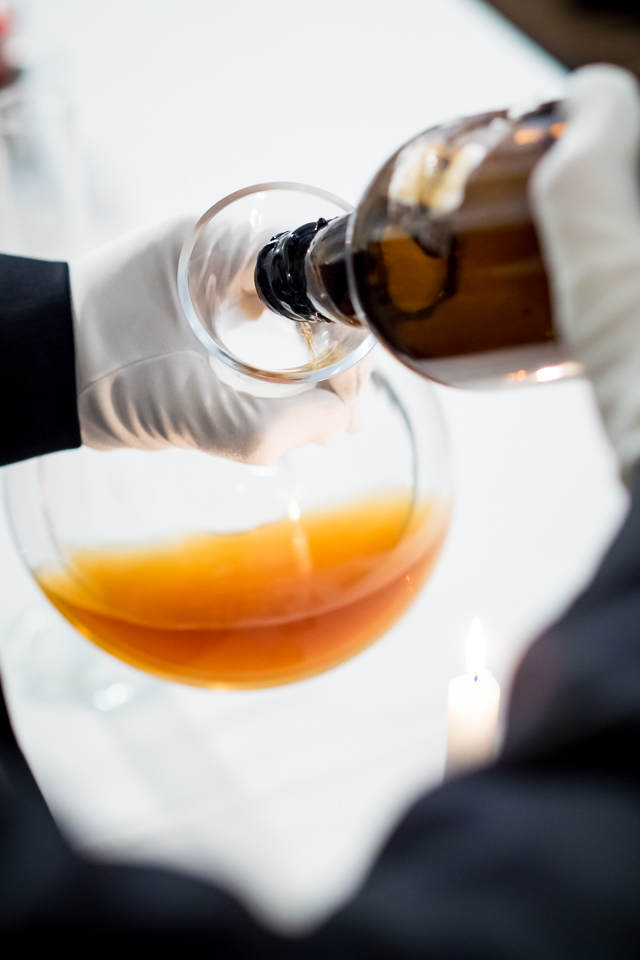 The rare vatted Glenlivet 1862 whiskey used in the Louis Moinet Whiskey Watch was opened and decanted by Wealth Solutions before the Baselworld Show and then poured into vials and sealed.

However, rest assured that other creations are on the drawing board. In fact, Wealth Solutions began the Spirit Watches line — with alcohol inside watches – a couple of years ago, when it teamed with Swiss watch brand Armin Strom for the Cognac Watch (with the oldest cognac in the world, Gautier 1762, inside). The second watch was with Peter Speake-Marin, whose Rum Watch housed the oldest rum in the world, Harewood 1780.

As with all of the spirits used in the Spirit Watches Line, there is an opening of the bottle ceremony. In the case of The Whiskey Watch, the bottle of Old Vatted Glenlivet 1862 was opened on March 14th in Warsaw, Poland. It was decanted, tasted, and then poured into individual tiny vials that were sealed on the spot. The vials were then turned over to Louis Moinet owner, Jean Marie Schaller, to bring back to the watch atelier, where it is put into the miniature capsules and placed inside the watches. 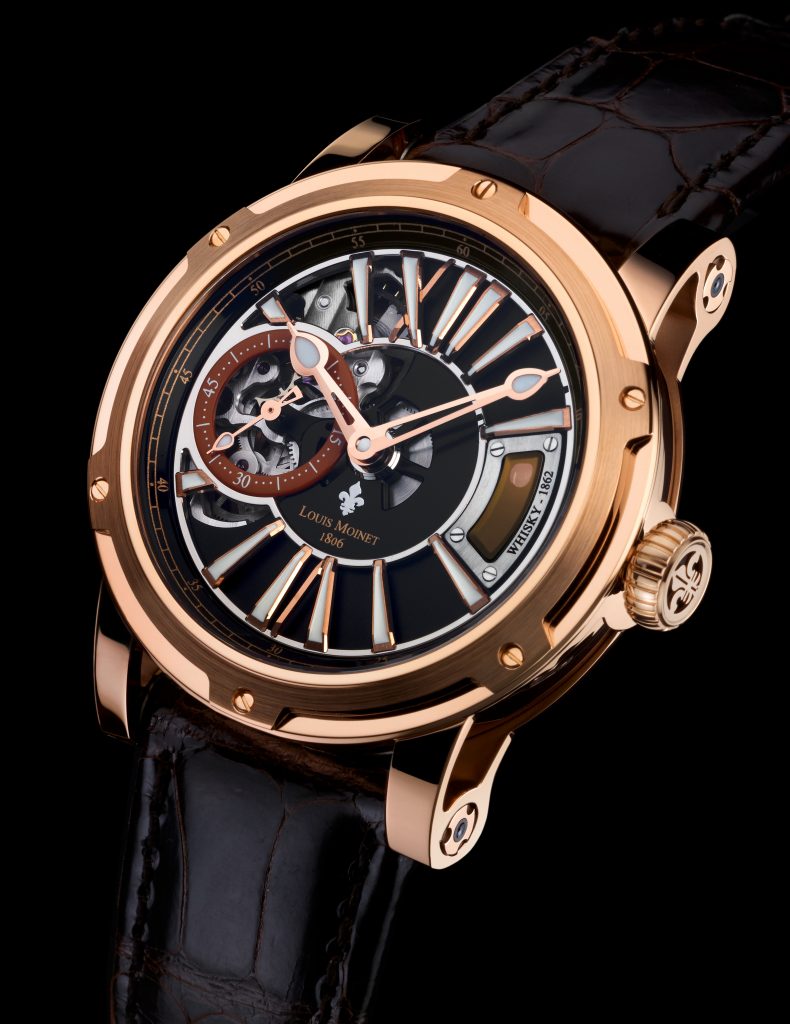 The Louis Moinet Whiskey Watch features a tiny capsule of rare Vatted Glenlivet 1862 whiskey, visible at 3:00 on the dial.

That opening ceremony occurred just a week before the Baselworld Fair and when we met with Schaller, he secreted us away to a corner, told us of the watch and showed us the first one. If you know Schaller, you know that he is incredibly enthusiastic and passionate about all of his watches, but this one seemed to hold even more excitement for him. One might say there was a certain “spirit” about it. 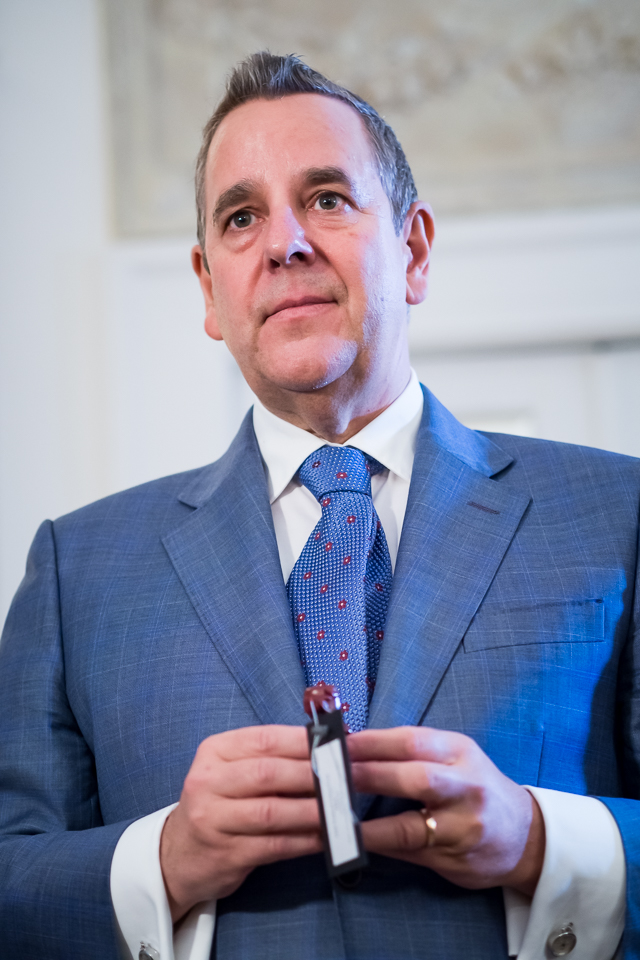 Jean-Marie Schaller, owner of Louis Moinet, at the bottle-opening ceremony for the rare Vatted Glenlivet 1862 whiskey with Wealth Solutions.

If you’d like to whet your appetite and witness this oldest whiskey in the world being poured, watch the video of the bottle-opening ceremony below.