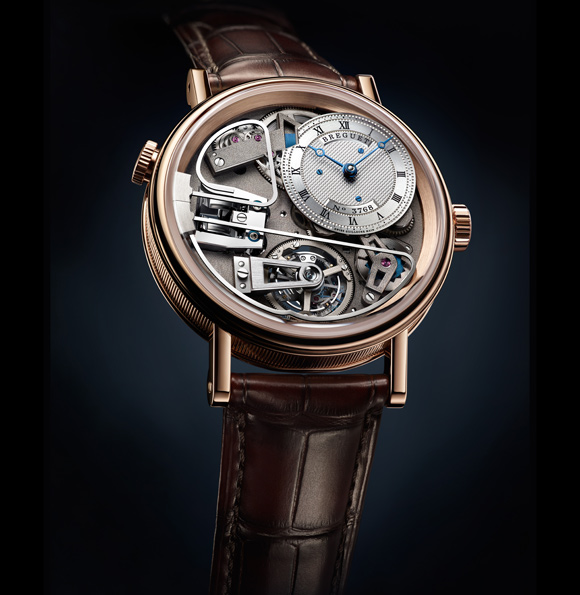 Just last year, Breguet unveiled its first Tradition Minute Repeater Tourbillon (Ref. 7087). While the watch was exceptional, the brand opted to return to the drawing board to perfect the sound and performance. This year at Baselworld, Breguet unveiled the new, finalized version — which should begin making its way to retail later this year. For now, we bring you a run-down of the watch, as presented by the editorial team at  WorldTempus (wherein our founder, Roberta Naas, also has a column).

“Representing much more than a Grande Complication model, the all-new Breguet Tradition Répétition Minutes Tourbillon 7087 is a collection of innovations. Breguet’s engineers devoted themselves first and foremost to scientific research and only subsequently addressed the issue of the components required for sound production. Using specially developed sound generators, they experimented with more than 200,000 combinations of frequencies, which they then classified into categories according to psychoacoustic criteria. The sounds were listened to and evaluated so as to determine the combination of notes that best met the development objectives. The choice made after this selection process then guided the development and the construction of the model.

This unprecedented approach determined the choice of every aspect of the timepiece, from the innovations that were to be integrated through to the choice of components. The Tradition Répétition Minutes Tourbillon can pride itself on six new patents and five major new innovative elements never previously seen in a wristwatch repetition mechanism. 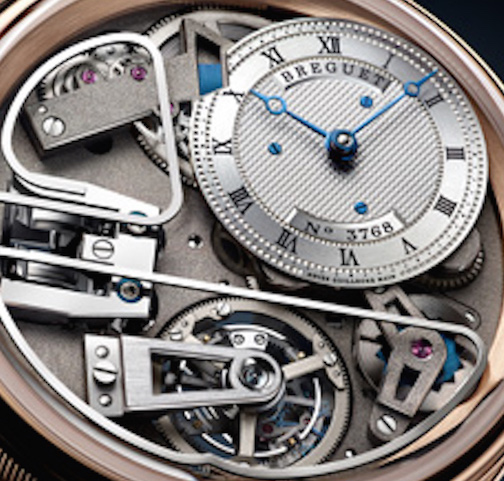 The gong springs and hammers have been totally reworked.

The gong springs – a Breguet invention and an essential part of minute repeater mechanisms – have been entirely reworked. Generally coiled around the movement and horizontally struck by hammers, they have in this instance been attached to the bezel and vertically struck by the hammers. This innovative construction is based on the fact that the sapphire crystal and bezel enable optimal sound emission when they vibrate vertically. By striking the gongs vertically from the movement towards the bezel, the hammers enhance the transmission of the vibrations towards radiating elements and then through the air.

The structure of the hammers also features an innovation. The hammer causes the gong spring to vibrate. To prevent the hammer rebounding and damping the vibration of the gong, Breguet has invented a semi-active buffer which becomes active after the strike so as to avoid a double strike, and thereby maximises the energy injected into the gongs by the strike. The gong springs of this Tradition Répétition Minutes Tourbillon are also distinctive in that they are shaped like lobes in dimensions specially designed to enrich the sound and extend its duration, and are made from the same rose or white gold alloy as the case and then rhodium-plated. In order to favour the transmission of the minute repeater’s vibrations, they have been attached to the watch bezel. The latter, rather than rigidly formed into the case, is fitted with three pillars that are themselves attached to the case. Given that these pillars enjoy a certain freedom of movement, the bezel and the sapphire crystal can vibrate in resonance with the gongs. The sound emitted is thus enriched.

Like the Classique La Musicale 7800 model, this new Tradition 7087 features an acoustic chamber built into the case whose role is to increase the sound level of the minute repeater while filtering the sounds from the mechanism. This chamber can be glimpsed through eight small holes arrayed on the lower bezel encircling the caseback. It is shaped for the resonant frequencies of the desired sounds. In this model the cavity is rectangular in profile and encircles the movement, from which it is separated by a membrane designed to seal the movement from the outside air. Contrary to the 7800 model that featured a metallic glass membrane, this one is made of gold and affixed to a sapphire crystal providing a stunning view of the movement.

These innovations are complemented by the use of a magnetic strike governor, developed on the basis of a concept featured in the Classique La Musicale model. This patented system is composed of silver weights surrounded by magnets placed around the circumference of the strike governor. As they turn within this magnetic environment, the weights produce an electric current that runs counter to the magnetic field of the magnets. The use of a magnetic governor brings an added advantage: silence.

Since the mechanical elements do not touch each other, this exclusive Breguet governor is perfectly silent. Unlike the magnetic governor of La Musicale which remains hidden from sight, the decorated and open-worked version on the Tradition Répétition Minutes Tourbillon is placed in full view on the dial side of the watch. It has also been the subject of much calculation and optimisation to adapt it to the minute repeater mechanism. The titanium used to make the bridges and the mainplate of the Tradition, along with appropriate sizing of the components, serves to avoid propagating the noises from the striking mechanism, by filtering their transmission through to the exterior.

The Tradition Répétition Minutes Tourbillon 7087 is naturally equipped with a tourbillon, along with an automatic winding peripheral rotor system. The striking mechanism is activated by pressing a bayonet pusher instead of by pulling the customary dedicated slide. The energy required is delivered via a chain – a transmission mode reminiscent of the famous No. 160 pocket watch made for the queen of France, Marie-Antoinette, and re-issued by Breguet in 2008.”