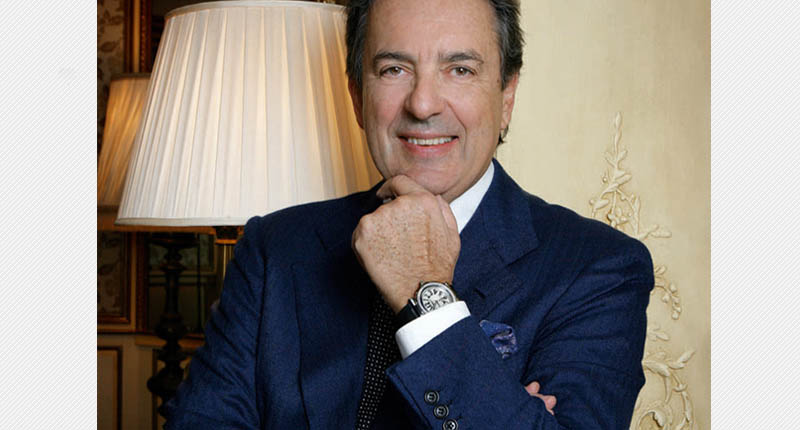 I was in my twenties when i first met Philippe Charriol. He was energetic, enthusiastic and flamboyant.  I remember he wore his white fur coat regularly and bedecked himself in his own jewels and watches.  He was full of character and life. Sadly, I learned today that Philippe Charriol was killed in a race car accident earlier this week while driving on the Circuit Paul Ricard track. It seems somehow apropos that he would die at a track. The French-born designer loved racing. In fact, it was from him that I first learned about ice racing.

According to the statement issued by his eponymous independent family-owned brand, currently run by his adult children, Charriol was driving the Mistral straight  when the accident occurred. He received immediate medical attention at the track and was take to a hospital in Marseille, where he later died. He was 77 years old.

Charriol had spent about 15 years at Cartier in the 1960’s and ’70’s. But he was restless and wanted to create his own designs. It was in 1983 that Charriol broke out on his own and started his watch and jewelry company. Based in Geneva, the brand created fine Swiss watches, jewelry, accessories and later clothing and fragrances. An astute businessman, he focused on winning over the Asian market with his French-Riviera style jewels long before many Swiss watch brands focused their attentions on the Far East.  He even became one of just three luxury brands ever allowed to hold an event inside Beijing’s Forbidden City (in 2011).

He also began opening Philippe Charriol boutiques early in the company’s history and today the brand has 285 boutiques around the world and is sold in more than 3,000 stores.  Until the day he died, Charriol remained intimately involved in the family business on a daily basis. I would have expected no less of him. I will always remember him very fondly and am saddened by this loss. The jewelry and watch industry, as well as the accessories and clothing market, are all down a master here.

“Philippe Charriol, with his incredible lust for life and audacious spirit, embodied ‘l’art de vivre la difference,’ a fitting signature for an exuberant founder. His many accomplishments and the success of his brand are a testament to the destiny that can be achieved by following one’s heart,”  read a statement issued by the company.

Charriol also leaves behind his wife, Marie-Olga Charriol, the brand’s public relations director, and another child,  Laetitia. There will be  private funeral service in Marseille next week and a public memorial service will be held sometime in late March.