Own a Piece of History and Precision: The Arnold & Son TB Victory 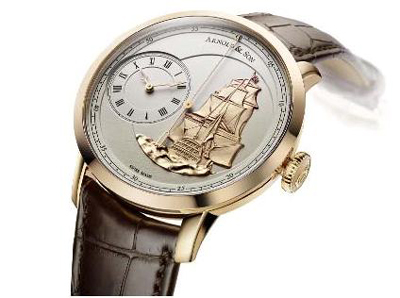 Designed after the HMS Victory, a first-rate war ship of the Royal Navy launched in 1765, this Arnold & Son TB Victory watch is built to withstand the test of time, with great precision in a beautiful package. On the right side of the dial, there is a hand-chiseled 22-karat gold appliqué created in the exact likeness of the great ship. Instead of the typical time indication revolving around the entire dial, the time is indicated via a subdial on the left side of the dial.
Only a gold seconds hand revolves around the entire dial – paying further homage to the famous war ship. This is where the “TB” of the name TB Victory comes into play, as TB stands for True Beat seconds. A rarely implemented complication, the True beats seconds indicates extreme accuracy – a “must” for Mariners navigating the world’s seas hundreds of years ago. The combination of a true beat seconds with an automatic winding system requires great technical 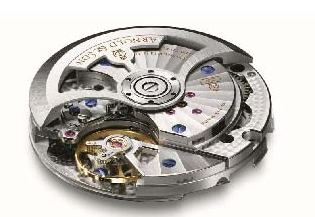 The movement of the TB Victory watch holds a global patent.

prowess. As such, the system is patented worldwide. All parts are produced with accuracy to a micron, or to one-thousandth of a millimeter thanks to state-of-the-art LIGA manufacturing technology. The watch is powered by Arnold and Son’s own 6103 self-winding Caliber. It is part of Arnold & Son’s Instrument Collection of watches inspired in design by the distinctive chronometers produced by John Arnold and John Roger Arnold. Only 28 TB Victory watches will be made, so now would be your chance to get as close to owning a part of HMS Victory, and precision timing, as you will ever get. 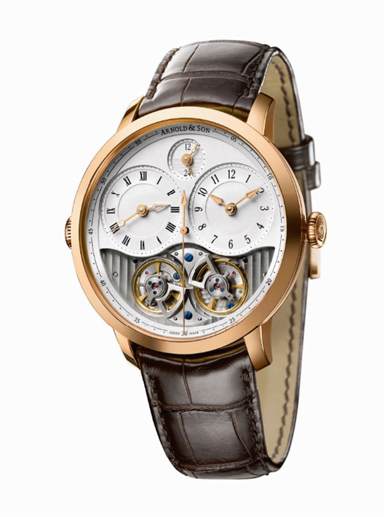 It may also interest you to know that Arnold & Son just won the AWJ Award for Best Multi-Time Zone watch at the Middle East Premier Awards 2013. This watch houses the exclusive mechanical movement A&S1209.