We all expect flashlights to be totally utilitarian…  and they are. Now, though, Orbita has revolutionized the flashlight for the luxury sect – especially those with an affinity for sailing and lighthouses. The brand unveils its new LightHouse™ series of  luxury LED  flashlights – which we review herein. 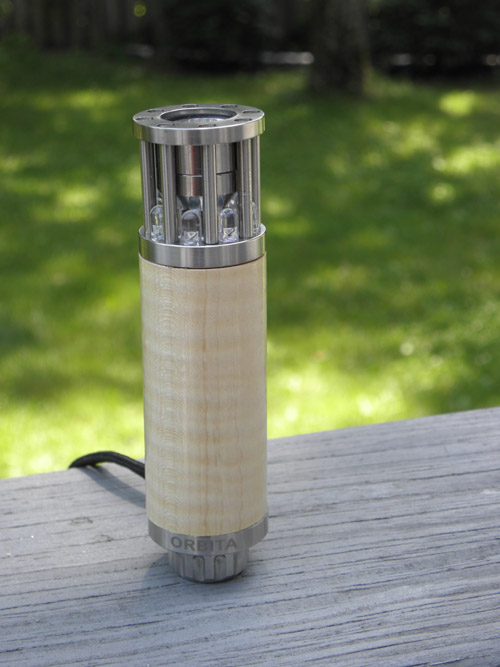 I’d seen the picture of the Orbita luxury Lighthouse flashlight, but when the box arrived, I was really interested to see how the flashlight was packaged and how it operates. Accompanying the flashlight  is a battery charging station to charge the Lithium-Ion battery, an extra battery, a leather holster-like case to attach the light to your belt, and a stainless steel lantern stand. 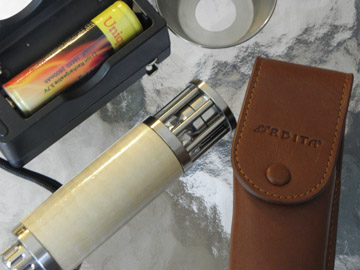 The flashlight itself comes in a very nice black faux carbon fiber box – chic packaging for the Orbita LightHouse.  The box alone, from the gloss black finish to the high lustrous hinges, and black leather cushion, is one that you would proudly leave on your dresser or on a nice side table for people to see. 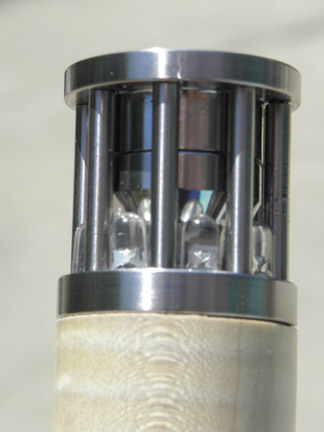 The flashlight model that we are revieing is the Fiddleback Lighthouse Flashlight.  The name LightHouse™ is for the beautiful body of the flashlight that stands tall and resembles a lighthouse—with the lights on the top open on the sides, as well. The Fiddleback earned its name because the body is made of hard maple, which is often used to make wooden instruments, including violins. The product is also offered in a stainless steel finish, Carbon Fiber, Zebrawood, Cocobolo, and the Fiddleback.

There are six different flashlight settings, changed just by a half click of the power button on the bottom. There is the search light, which uses 350 lumens, and can have up to a 100,000-hour use over its lifetime.  There is a reading light, a defense strobe (which causes the light to strobe at a disorienting brightness, which is the point), an Morse Code international SOS signal, a lantern mode (perfect for power outages and low energy draw), and the Beacon setting, which revolves the outer LEDs as a lighthouse would. The battery life of this light is quite a lengthy duration, from 2-3 hours on full power, all the way to a stunning 150 hours on beacon mode. 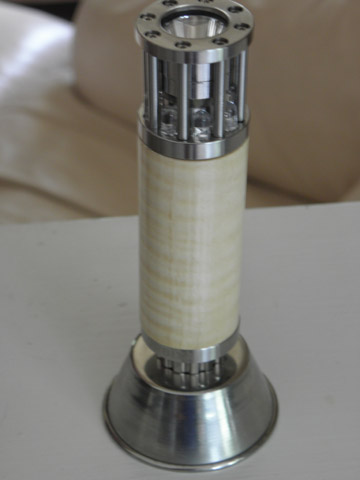 Being a firefighter, I can speak for many, if not all of my brothers and sisters, when I say I love playing with new toys I can use in the field– especially flashlights. We rely on flashlights more than people would know. I was very surprised to see this very fancy flashlight have such a powerful and multi-dimensional output of light.  I immediately put it up against my Streamlight Stinger DS LED flashlight, which also has a 350 lumen output. The Streamlight still took the win in brightness and durability, but the Lighthouse is no lightweight. It is constructed of 18/8 stainless steel and has a nice sturdy feel to it. Close inspection shows how well this is built and the top craftsmanship behind this made-in-America (North Carolina) luxury flashlight.

I didn’t want to start testing its strength by dropping it, not only because I don’t own it, but also because it looks too good to purposely drop. Being built so well, I’m convinced it would hold up without a problem, especially since it is protected by a sealed sapphire crystal lens, which, while sounding very different, adds to the enforcement against damage. 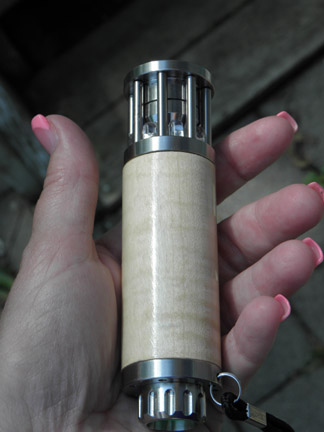 The Orbita LightHouse is slim and small — even in a woman’s hand – but packs a powerful light.

In short, if you have a dad who uses a flashlight for any purpose—or one who wants a great gadget to display on his desk or his boat deck – this is the gift. You can go online right now and order one, print the picture out and watch him be mega-impressed when he opens the box that is soon to be shipped to him. The cost?  Retail $195 to $295.