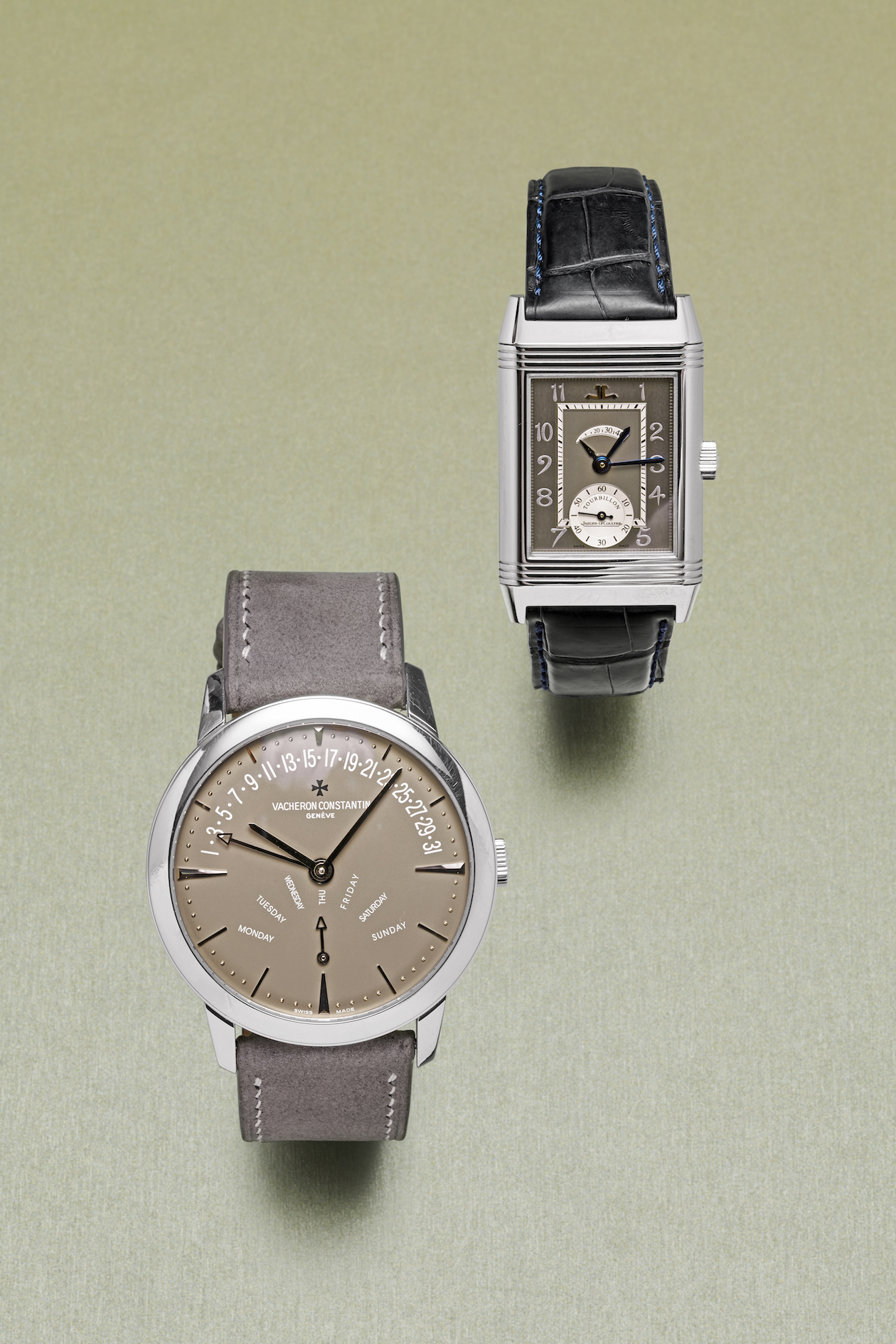 Ineichen Zurich’s upcoming weekend auctions on line and in person include some incredibly rare and coveted watches, such as this Vacheron Constantin and Jaeger-LeCoultre.

True watch collectors looking for their Holy Grail pieces may not need to look any further than the upcoming main and off-shoot auctions by Ineichen Zurich that will take place next weekend, November 20 and 21, both online and in person. The auction house is selling some impressive and rare  timepieces by both big brands and small independents during its two-day main auction events, and during two additional auctions (one per day) that follow particular themes that will have collectors lining up to bid.

The November 20 main auction, Auction 175 Part 1, includes vintage timepieces, including rare clocks,  pocket watches and older wristwatch, while the main auction, Auction 175 Part 2, on November 21 focuses on modern watches. Each of these auctions takes place from 13:00 to 15:00 Zurich time. There are 119 lots in the Part 1 auction, including a 1975 Patek Philippe Ellipse Lady white gold braided watch with integrated bracelet. The starting bid for this manually wound  piece with striking blue dial is CHF 2,000. Another 79 lots comprise the Part 2 auction and they include Jaeger-LeCoultre Reverso, Vacheron Constantin Overseas, Audemars Piguet and more.

Then, on November 20 at 16:00 Zurich time, the themed “Alchemy of Gold” auction takes place – with the emphasis on yellow gold. In fact, yellow gold has  become a truly hot topic of late as we witness a return to the yellows of yesteryear. On November 21, after the main auction, the second specialty auction, “17 Shades of Gray,” takes place at 4:00. This auction promises to be the most exciting of all, as it witnesses the sale of timepieces in steel, platinum and tantalum.

With such great themes in place, Ineichen Zurich naturally had to curate some of the finest examples that will ensure a grand sell-out of all the lots at top prices. From some of the most sought-after big brands like Audemars Piguet, Patek Philippe, Breguet and Vacheron Constantin to independents such as F. P. Journe, Urwerk, Konstantin Chaykin and more, these auctions promise  to have many collectors on the edge of their seats. 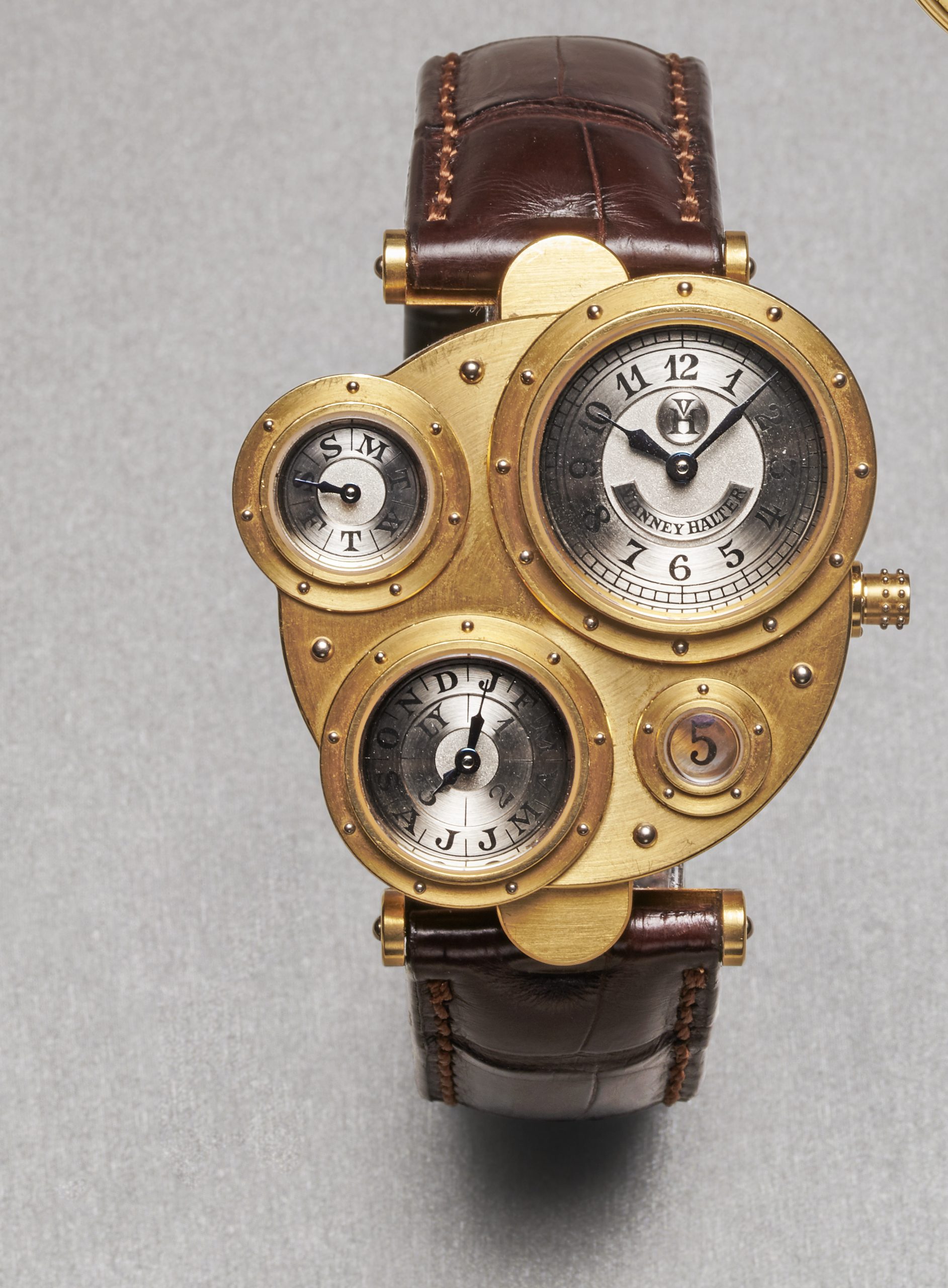 Also in the Gold auction by Ineichen Zurich are two Vianney Halter watches.

Yellow gold watch lovers will be stepping all over one another to achieve the highest bid on the 12 lots in this specialty auction. Each is more breathtaking than the next and each offers a unique walk down memory lane. Inspired by the medieval alchemists who crafted swords and armor of base metals infused with a bit of gold to achieve what they hoped would be immortality, the Alchemy of Gold auction includes pieces from brands such as Tissot all the way to A. Lange & Sohne.

A particular highlight gives collectors the opportunity to bid for a lot that includes two Vianney Halter watches: one each in white gold and yellow gold of the famed Antiqua model. Estimates are between CHF 50,000 to 100,000 each. These space-age looking watches were first introduced in 1998 and billed as a Relic of the Future Past.  Inspired initially by the spirit of marine chronometers, the watches boast perpetual calendar functions viewed via riveted portholes. 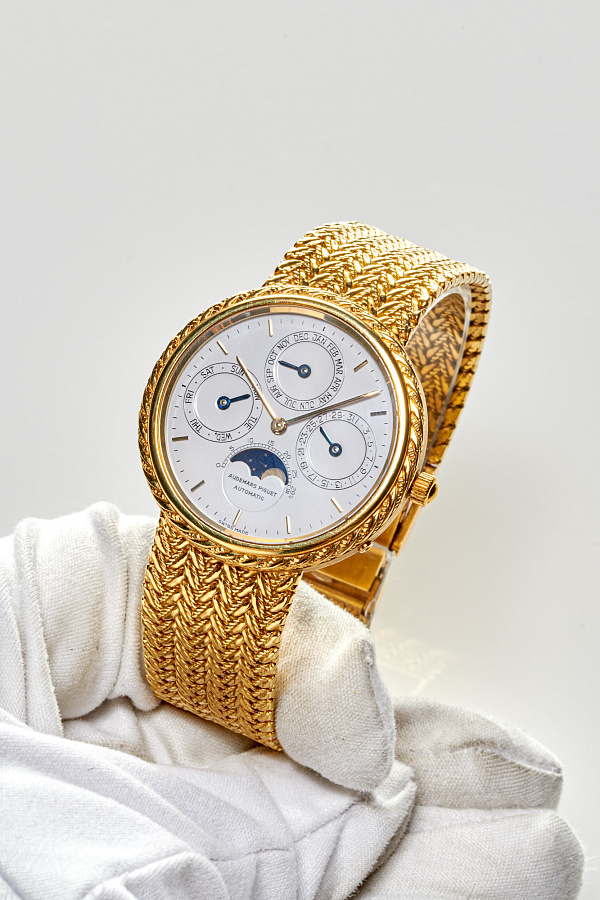 Lot 4 in the Alchemy of Gold auction by Ineichen Zurich is a braided gold Audemars Piguet watch.

Also of note in this auction: an Audemars Piguet Perpetual Calendar watch with a gold braided bezel and an intricate braided integrated bracelet. The 36mm watch was first released in 1985 and is estimated to sell for between CHF 10,000 and 15,000 – a veritable steal. There are also four Royal Oaks up for grabs, as well as a Vacheron Constantin, Patek Philippe, Girard-Perregaux, Andersen Geneve, Breguet and even a Daniel Roth watch – all with a variety of complications. 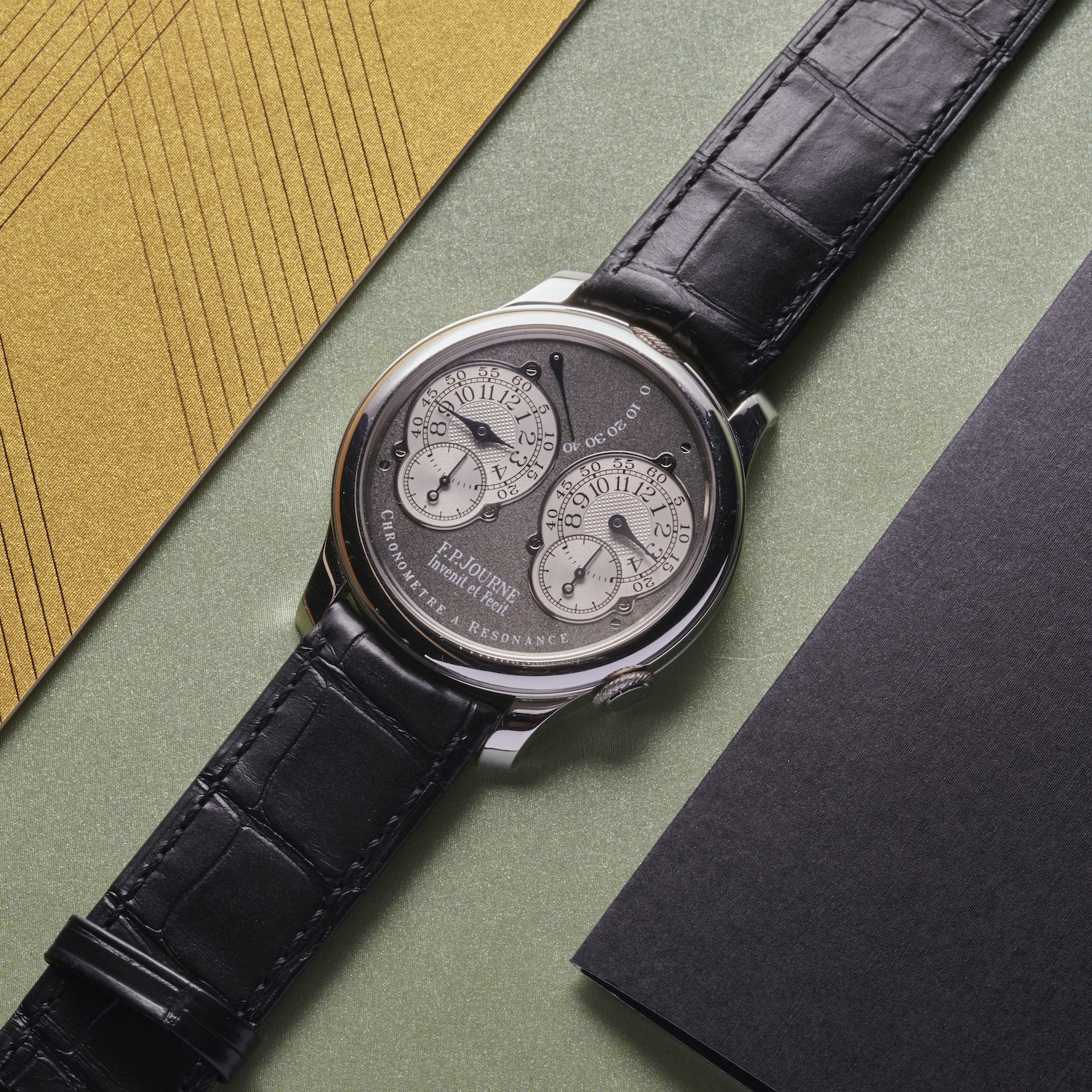 F.P. Journe watch up for sale during the 17 Shades of Gray auction by Ineichen Zurich.

Inspired by the books and subsequent movie series beginning with 50 Shades of Gray, the 17 Shades of Gray auction reflects only the name, not the content of the book. However, some will find this auction one of the most scintillating ever.  Highlight lots include three rare F.P. Journe pieces, including the Chronomètre à Résonance Ruthenium, which is estimated to sell for between CHF 200,000 and 250,000. It boasts a platinum case with a matt textured solid gold dial and dark grey ruthenium coating and is powered by the hand-wound Resonance Caliber 1499.3. It is just one of 99 pieces ever made. Other F.P. Journe watches include the Tourbillon Souverain Ruthenium and the Souverain de Boulle rare watch, of which just eight were ever created.

Audemars Piguet followers will be thrilled with the tantalum and platinum Royal Oak Perpetual Calendar Ref. 25820TP (estimated to sell for CHF 100,000 to  CHF 150,000). This watch is  the rarest version of this model, that was created in a limited edition of just 15 pieces. The ultra-thin self-winding watch boasts another rarity: a non-tapiserrie dial. Also up for sale and originally made by Audemars Piguet is the Star Wheel Automatic Ref. 25720PT. It is number 9 of nine pieces made and is the only one to feature its limited-edition number on the dial. 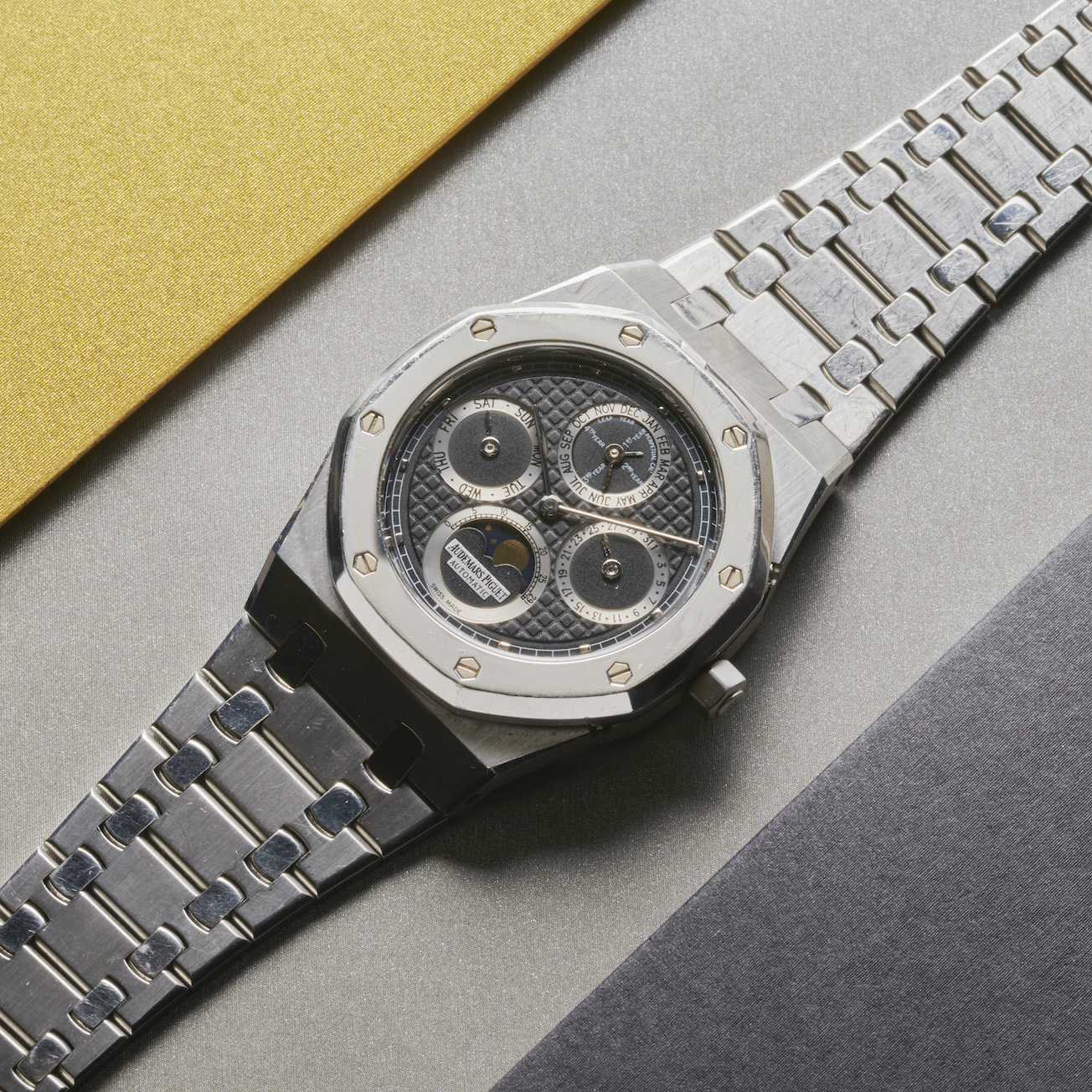 Audemars Piguet watch up for sale during the 17 Shades of Gray auction by Ineichen Zurich.

Ineichen Zurich is one of the two leading Swiss auction houses when it comes to sales and has set a host of watch-auction records over its nearly 50 years in business. In fact, in its May auction – its most successful auction to date – the company made history with the world’s most expensive NFT token. It sold the Konstantin Chaykin Joker NFT for more than $50,000. Under fairly new management (the company changed hands in 2017), Ineichen’s  growth plans include an online auction site and store, as well as new offices in New York and Milan. This November 2021 auction may well top all records thanks to the impressive lineup of lots.